Accessibility links
How's The Sausage Made? These Folks Really Want To Share The Knowledge : The Salt Artisanal meat producers face a big barrier to getting into the game: They have to come up with a complex food safety plan that can take months of research and tens of thousands of dollars to craft. A new project wants to make it easier for the next charcuterie master to open shop by creating an open-source safety plan that newbies can look to.

How's The Sausage Made? These Folks Really Want To Share The Knowledge

How's The Sausage Made? These Folks Really Want To Share The Knowledge 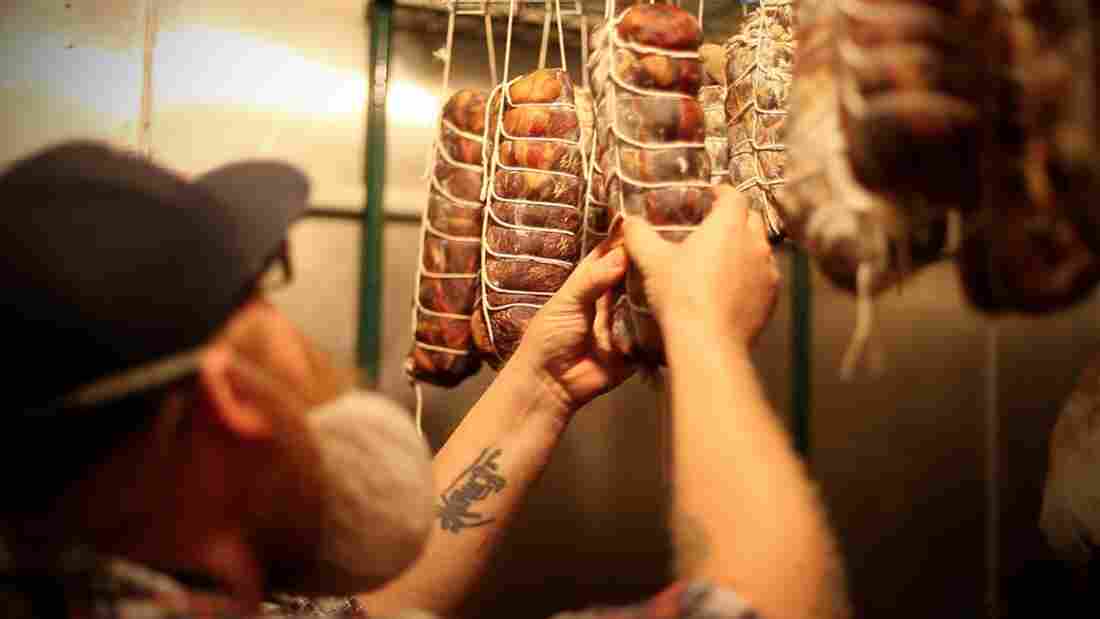 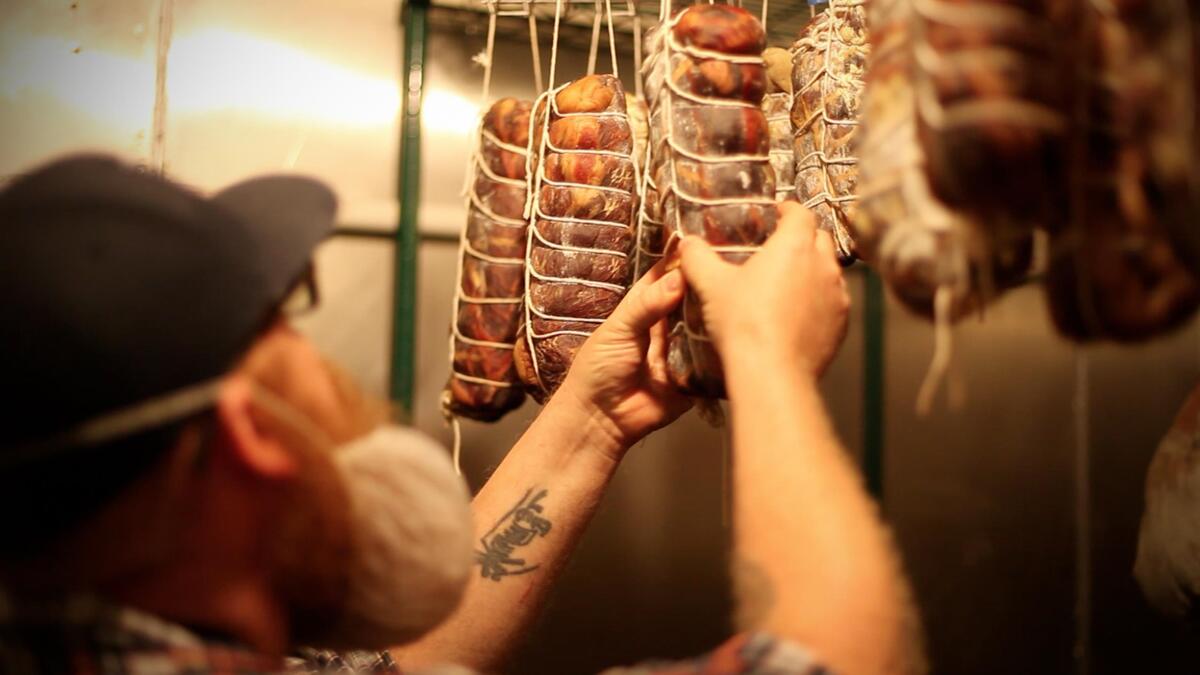 Brent Gentry of Underground Meats rotates a coppa. Underground Meats is behind a new project that aims to lower the barrier to entry for would-be artisanal meat producers by making it easier for them to craft food safety plans.

With the current bloom of artisanal small-batch producers across the country, you'd think that all you need to start up a new food business is a good idea and a lot of gumption. And for the most part, that's true. But when it comes to artisanal producers working with meat, you also need something else: a Hazards Analysis and Critical Control Points plan. Or, if you will, a HACCP.

A HACCP (pronounced, by those in the industry, as HASSup) aims to accomplish the admirable goal of keeping our food supply safe by planning out critical control points, monitoring, hazard analysis and all that fun stuff, making sure that you don't get a dose of Listeria along with your saucisson sec.

For dry-cured meats, which never get a turn in the bacteria-killing heat of the oven and rely instead on critical control of pH and moisture levels, this is especially important. It may seem surprising that there isn't one universally required procedure. But that's both the bane and beauty of the HACCP.

"The USDA Food Safety Inspection Service wants you to demonstrate that the food you make is safe," explains Arion Thiboumery, founder of the Niche Meat Processor Assistance Network. "They put out performance standards, but they don't tell you how. People have tried a lot of different ways." This focus on results, rather than process, means that as long as you meet the safety requirements at the critical control points, you have some leeway in how you get there.

"The brilliance behind a HACCP plan is that it's so flexible," extols Elias Cairo, the co-founder of Portland's Olympic Provisions, the first USDA-certified charcuterie in Oregon. "The lack of guidelines lets you produce anything you want, in exactly the way that you want, as long as you can prove that it's safe."

Cairo is clearly a big fan of the HACCP (and the USDA in general), whose adaptability has allowed him to produce cured meats that are winning fans across the country. But this flexibility comes at a cost.

Because of the sausage world's variation in process and recipe, each HACCP is uniquely tailored to each small-batch producer's process. Sausage-makers have to spend months and months familiarizing themselves with the scientific literature, taking classes and exams and providing the USDA documentation for the path they're taking — or pay significant money to consultants to come up with a plan for them, which can cost tens of thousands of dollars.

And once they've paid (in money or sweat) for these plans, they don't necessarily want to share their trade secrets. But one sausage maker — Underground Meats, of Madison, Wis. — is looking to establish a new model, by developing (via Kickstarter) an open source HACCP plan template for all to use.

"I think this is a large barrier to people entering the market, and if we remove it, we'll see really good products coming out," hopes Underground Meat's Jonny Hunter.

If the project's funding goal is reached, he aims to work with a third party company, possibly the University of Wisconsin, to lay out the process, and then publish the results under a Creative Commons license. "The craft is something that takes time, but the knowledge of the safety side is something that should just be open and free."

Hunter's mission seems to have struck a nerve in the artisanal meat community — as of this writing, the campaign is nearly three-fourths of the way to its $40,000 goal.

"I think it would be consistent with the mission of a land grant institution — let's use public money to solve a problem that we all agree should be solved."

But some, like Olympic Provisions' Elias Cairo, are a bit skeptical as to how it'll play out. The HACCP must be so specific that it'd be hard to universalize a sort of "bible" — beyond providing already-available general information on critical control points.

But Hunter thinks that while it won't be a one-size-fits-all fix, the control points, steps and scientific justifications will be a valuable jumping-off point. "People would have to tailor it individually — nobody would be able to just download it from the Internet; it needs to be specific. But if I would have had this five years ago, it would have saved me so much time."