Accessibility links
Meat-Drenched Oktoberfest Warms To Vegans : The Salt With more Germans going vegan and vegetarian, the Munich festival wants to accommodate them. Restaurants say their vegan options at this year's festival are selling well. 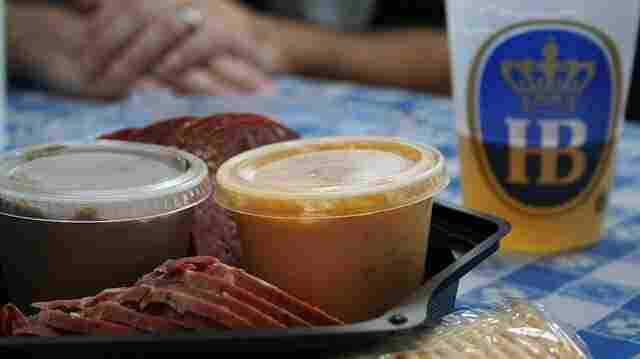 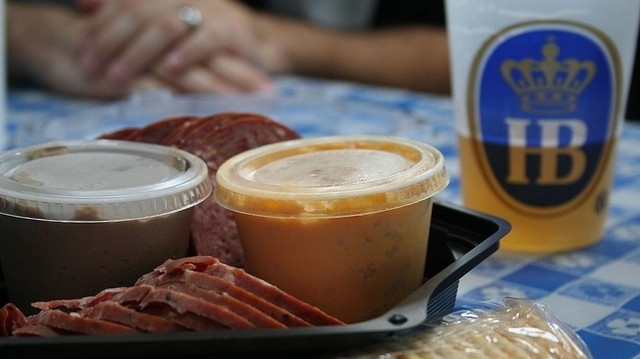 Traditional fare at Bavarian Oktoberfest is heavy on meat, but that's changing as restaurants add more vegan and vegetarian options.

Oktoberfest, one of the world's largest festivals, is mostly about beer. And to soak up all that froth and alcohol, Bavarians have traditionally reached for meat.

The culinary cornerstones of the Munich festival, which runs this year from Sept. 21 to Oct. 6, include roast pork, ham hock, and weisswurst — a white sausage that complements the 40 different types of local beer. But this year, breaking with a 200-year-old tradition, Oktoberfest is catering to vegans. Claudia Bauer of the Munich City Council, which organizes the festival, says the move is a sign of the times.

"More and more Germans and people from Bavaria and Munich follow the vegan diet," she says.

Vegetables have become so hip in Germany that the Green Party used them as part of their platform in national elections last month. The party campaigned for a weekly "veggie" day in corporate cafeterias, where, in Germany, employees eat a free lunch.

With an average meat consumption in Germany of 132 pounds per person, annually, the manifesto caused outrage.

But vegetarianism in Germany is on the rise. The German Vegetarian Association, or VEBU, estimates 8 to 9 percent of the population, or 7 million people, is vegetarian, the second highest in the European Union, after Italy. And included in the 7 million are 800,000 vegans.

"In the last five years, there has been a huge boost to the vegetarian lifestyle in Germany, and we see evidence of this in our steadily growing membership," says Sebastian Zösch, VEBU's CEO. "The veggies are becoming a more and more important target group in areas like economy, science and politics. The focus is shifting toward them."

Zösch tells The Salt there are many more vegetarian and vegan restaurants in Germany, making it easier for people to adhere to the diet.

That awareness is nowhere more evident than at this year's Oktoberfest, which is expected to bring in more than $1 billion and some 6 million visitors to the Munich.

The idea to offer meat alternatives for everyone came from the Bachmaier family, owners of Herzkasperl. The Munich restaurant, better known for its pork with dumplings than Brussels sprouts, has been serving hearty fare for hundreds of years. The Bachmaiers' son is training to become a vegan cook and inspired the new dishes at Oktoberfest.

Martin Jonas has worked at Herzkasperl for four years and is proud of the recent introductions to the menu, just in time for Oktoberfest.

"A little door is opening [at the festival] for people who don't want to eat meat," he says.

So what's on the menu at Herzkasperl? Ginger-carrot soup, soy medallions to replace pork and mushrooms, and one of Bavaria's most beloved dishes — Käsespätzle, a cheesy egg noodle bake, made sans eggs and cheese.

"We replace the eggs and cheese with a vegan substitute and because it tastes so good people don't believe it's missing the two key ingredients," Jonas says.

Another tent is serving chicken fricassee made with soy cutlets. Bauer says there have long been a few Bavarian options at Oktoberfest for vegetarians: traditional dishes like Reiberdatschi, similar to a potato pancake, and cabbage.

But Jonas' vegan version of Käsespätzle is a sellout.

"They've been selling better than we thought," he says. "One day our cook spent 10 hours just filling orders for Käsespätzle."

Jonas says the older, more traditional generation of Germans take a live-and-let -live attitude to the egg-less, cheese-less dish being served up next to their sausages. "Most people say, 'I don't eat it, but it's cool.' "