Accessibility links
Pucker Up, America: Beers Are Going Sour : The Salt A brew that has all the complexity of a wine and the zing of a Sour Patch Kid, these tangy beers are rising in popularity. And with few hops in them, they're a great option to try if you don't like bitter beers or prefer a pinot noir to a Pilsner.

Hold Your Horses: The main flavor of a sour beer is tartness, like a strawberry or lemon. But many sours also have a "funky" taste that some say smells like a horse blanket or a barnyard. Credit: Morgan Walker

Move over, bitter IPAs and chocolaty stouts. There's a new kid on the craft brewing block, and it's going to knock your salivary glands into action.

It's called "sour beer." When you take a sip, it's like biting into a Granny Smith apple that's soaked in a French red wine: crisp, refreshing and a bit odd.

Where Can You Find Sour Beer?

Look for descriptors like tart, funky, wild, barrel-aged and spontaneous fermentation at bars and restaurants. These beers will very likely be sour. Here are a few bottles to look for in wine and beer shops or even Whole Foods Markets. Just be ready to shell out at least $10 for a 750-ml bottle. 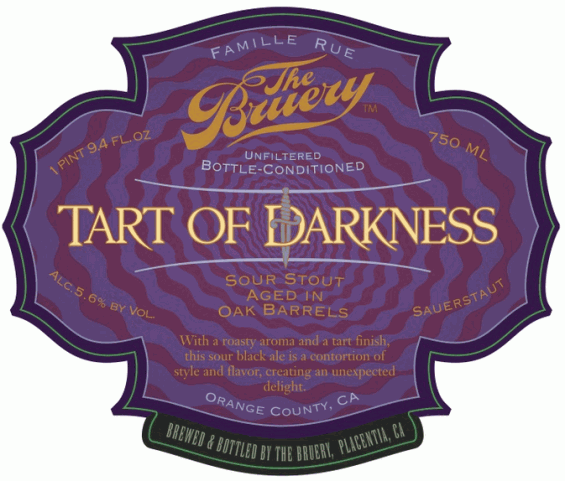 Do you think you can handle the sour side of beer? Courtesy of The Bruery hide caption

toggle caption
Courtesy of The Bruery

Sour beers are probably the oldest style of brew in the world, but they're just starting to get popular in the States. They were all the buzz at this year's Great American Beer Festival. And with hundreds of brewers now dabbling in sours, it's easier than ever to find them at a local bar or grocery store.

Most sour beers have few or no hops. So they're a good option to try if you don't like bitter beers or you're a wine lover who prefers a pinot noir to a Pilsner, says New Belgium's CEO, Kim Jordan of Fort Collins, Colo.

New Belgium, which produces the ubiquitous Fat Tire Ale, has started a whole series of sour beers called Lips of Faith — one of the most widely available lines of sour.

So what in the heck are these strange brews?

Sours beers are to the adult beverage world what yogurt is to dairy. Its beer that's been intentionally spoiled by bacteria — the good bacteria.

"We use the same microbes that make yogurt, miso and salami," says Alex Wallash, who co-founded The Rare Barrel, in Berkeley, Calif., one of the few breweries in the U.S. devoted solely to making sour beers.

Bacteria gobble up sugars in the beer and convert them into acids, like the ones in Granny Smith apples and lemons. The microcritters also churn out a smorgasbord of flavors and aromas. The result is a brew that has all the complexity of a wine and the zing of a Sour Patch Kid.

"Sour beers are tart like a raspberry or strawberry, but a lot of them are dry, like Champagne," Wallash says. So their taste sits somewhere between an ale, wine and cider, he says. "It will definitely change your expectation about what a beer tastes like. It's a new flavor experience all together."

"When I first tried a sour, I was shocked," says Patrick Rue of The Bruery in Placentia, Calif. "I thought it had spoiled, and I threw the rest of the beer down the drain."

But it was too late for Rue. He had been bitten by the sour bug and went on to make some of the first sour beers in Southern California, including the popular Tart of Darkness.

In traditional beer-making, yeast is added to boiled grains to ferment the sugars into alcohol. Then the brew is ready for bottling.

But for sour beers, the process doesn't stop there. Brewers also add the bacteria Lactobacillus and Pediococcus. Sometimes they'll include a dash of Brettanomyces, a type of wild yeast that makes cherry, mango and pineapple flavors as well as an earthy aroma that some call funky, horsey or leathery. 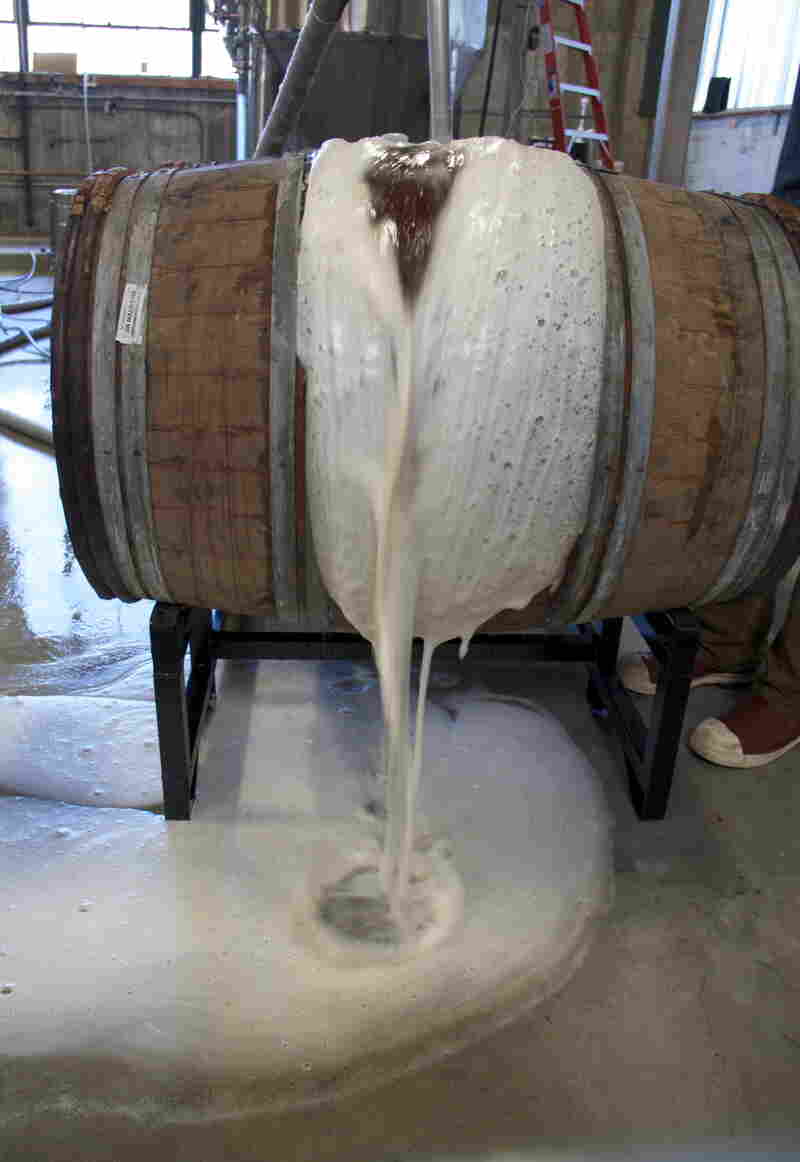 Most sour beers are moved to oak barrels for aging, which can be a messy business. Now how would Homer Simpson handle this situation? Courtesy of The Rare Barrel hide caption 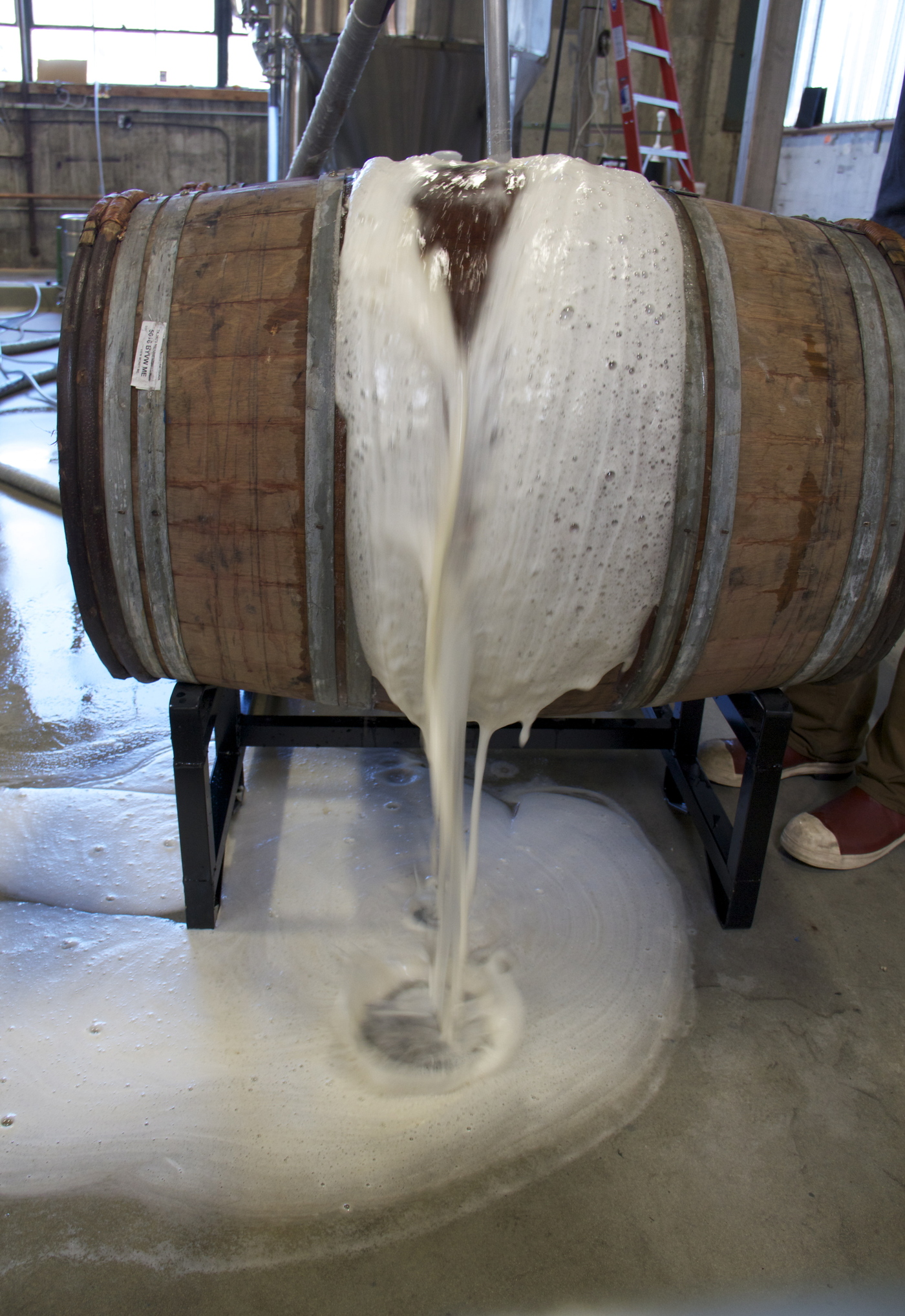 Most sour beers are moved to oak barrels for aging, which can be a messy business. Now how would Homer Simpson handle this situation?

Courtesy of The Rare Barrel

The alternative approach for brewing sours is to go old-school and just let all the wild yeast and bacteria in the air drop into the beer naturally. It's risky but — when done right — can produce magnificent beer.

That's the strategy Ron Jeffries at Jolly Pumpkin in Dexter, Mich., uses. He's a pioneer of the sour movement in America, and he made some of the first commercial sours way back in 2004.

"There's wild yeast and bacteria everywhere, especially if there are orchards nearby," Jeffries tells The Salt. "When you make a happy home for them in your barrels, they just show up and spontaneously ferment — and sour — a beer."

"For thousands of years, all beer had sour notes to it," Jeffries says. "It was refreshing and crisp because people didn't understand how to keep things clean.

"Then with pasteurization, refrigeration and an understanding of how to keep cultures free of bacteria, beers started to become nonsour," he says.

A handful of breweries in Belgium continued to produce sour beers, known as lambics, Flanders ales and guezes. But it's craft breweries in America that are making them fashionable again.

"They're taking the beer style in crazy directions, just like they did with IPAs and porters," Jeffries says. "The reason why you're seeing sour beers gaining popularity is because they taste great, but also because of the creativity of American brewers."