Accessibility links
Here's A Reason To Love Disco Again: Stopping Food Waste : The Salt Wednesday is World Food Day, an occasion meant to strengthen the commitment to end global hunger. Across Europe, activists are throwing disco soup parties to turn leftover food into delicious food to give to the hungry. And as the name suggests, there's music, too. 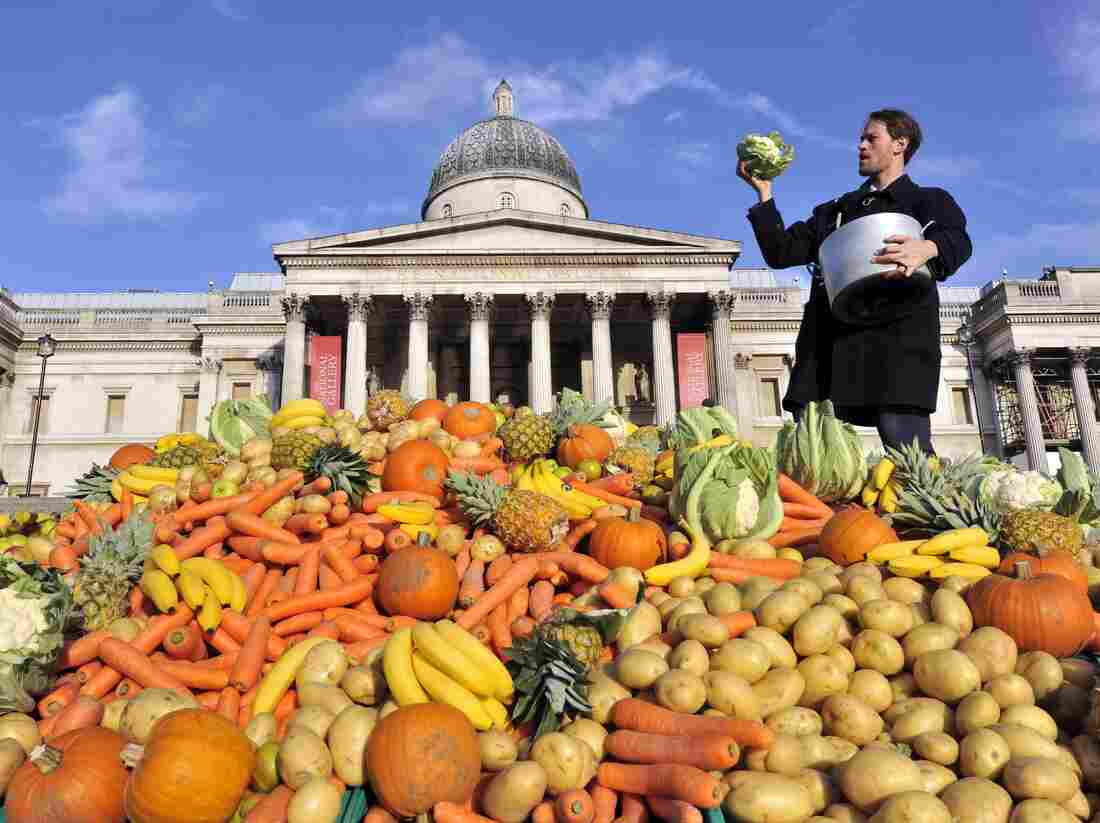 toggle caption
/Courtesy of Feeding the 5000 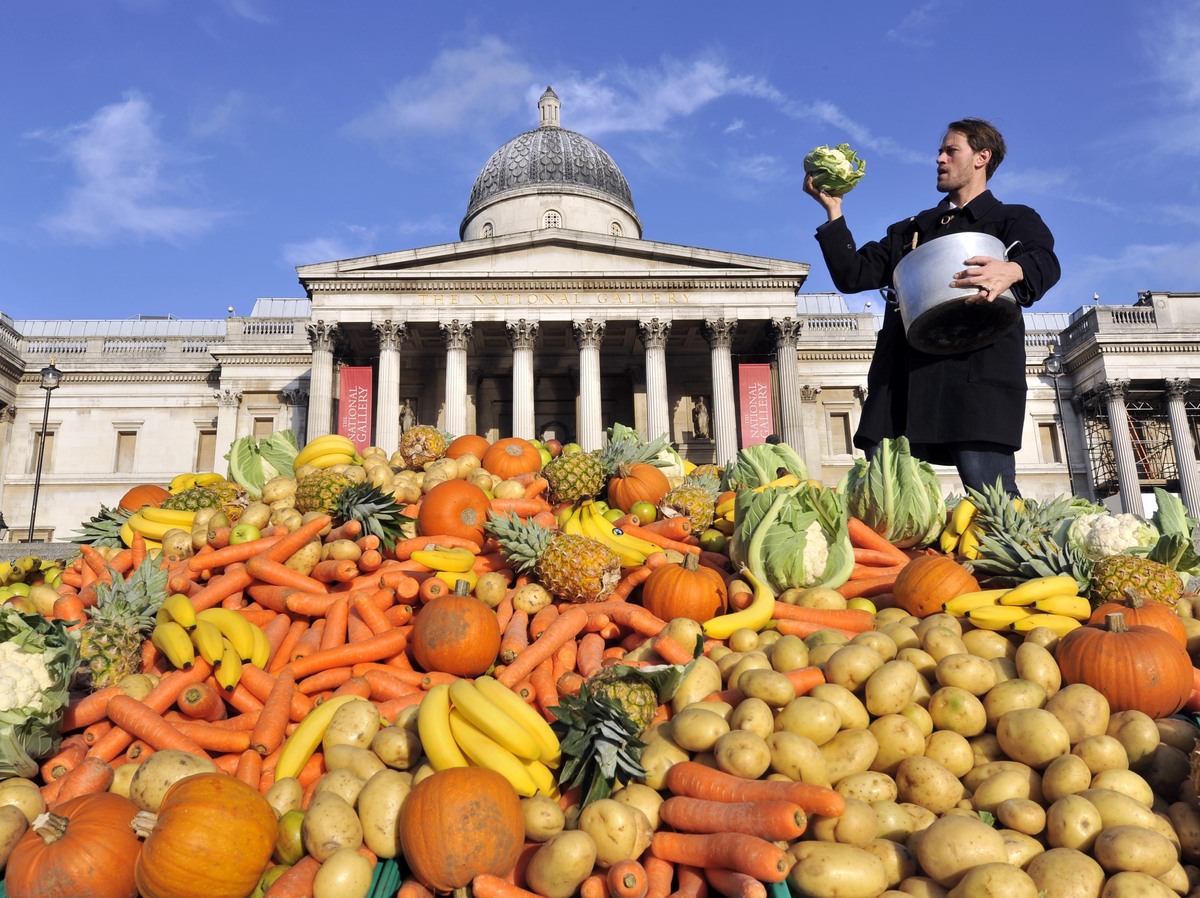 Tristram Stuart, founder of Feeding the 5000, is helping to organize several disco soup events across Europe for World Food Day.

Wednesday is World Food Day, an occasion food activists like to use to call attention to world hunger. With 842 million chronically undernourished people on Earth, it's a problem that hasn't gone away.

This year, activists are trying to make the day a little spicier with pots full of disco soup to highlight the absurd amount of food thrown away that could feed people: one-third of all the food produced every year.

What is disco soup, you ask? It's the tasty outcome of a party designed to bring strangers together to cook food that would otherwise end up in the trash. Oftentimes, the soup is donated to the hungry. Oh, and as the name suggests, there's music involved, too.

The first disco soup party was held in Germany in early 2012 by some folks affiliated with the Slow Food Youth Network Deutschland. The organizers collected discarded fruits and vegetables from a market, blasted some disco music and made a huge pot of soup.

Two months later, a group in France threw a disco soup party and attracted 100 people. More parties followed, in Australia, South Korea, Ireland and beyond. You can check out an earnest little video of another French disco food event here:

The idea eventually caught the attention of Tristram Stuart, a British food waste activist and writer who started Feeding the 5000, a campaign named for an event held in London in 2009 and 2011, where 5,000 members of the public were given a free lunch made with perfectly edible ingredients bound for the rubbish bin.

Stuart is adamant that consumers and businesses in the developed world have a moral obligation to reverse "the global scandal" of food waste. In addition to throwing events to cook up blemished but edible produce, his campaign is working to change European Union legislation on feeding food waste to pigs through the Pig Idea project.

For World Food Day, Feeding the 5000 is hosting a "flagship" disco soup party in Brussels. And the group says more pots full of disco soup will be bubbling away today in the Netherlands, France, Germany, Greece and Macedonia. The event hub is the Disco Anti Food Waste Day Facebook page.

And what if you don't like disco? Can you still have a disco soup event?

"We play anything that gets people dancing as they peel and chop the vegetables and fruit," Dominika Jarosz, event coordinator for Feeding the 5000, tells The Salt in an email.

While there are no disco soup events scheduled for Oct. 16 in the U.S., Feeding the 5000 says disco soup is starting to get traction here. The first U.S. disco soup event was held on Sept. 20 in New York, with the support of Slow Food NYC, the Natural Gourmet Institute, chef Paul Gerard of the East Village restaurant Exchange Alley and the United Nations Environment Program.

In advance of the soup blitz, Stuart visited local farms in New York and New Jersey and gleaned blemished tomatoes, oversized watermelons, squash, eggplants and other fresh produce that the farmers were unable to sell. A rotating crew of DJs provided a soundtrack at the soup-making party at the Chelsea Super Pier, and most of the food was donated to the Bowery Mission. Such events, he says, help raise awareness among food donors like grocery stores and farmers and help them forge long-term relationships with organizations that feed the hungry.

Americans may be getting more motivated to address food waste, but we have to hand it to the Europeans, who do seem to be out in front on the issue. It was a group of Austrians, after all, who started a reality cooking show centered around Dumpster diving.

Food waste was also a talking point for world leaders who spoke up on World Food Day. "Reducing food waste is not, in fact, only a strategy for times of crisis, but a way of life we should adopt if we want a sustainable future for our planet," Nunzia De Girolamo, Italy's minister for agriculture, food and forestry policy, said at a ceremony Wednesday at the Food and Agriculture Organization's headquarters in Rome.