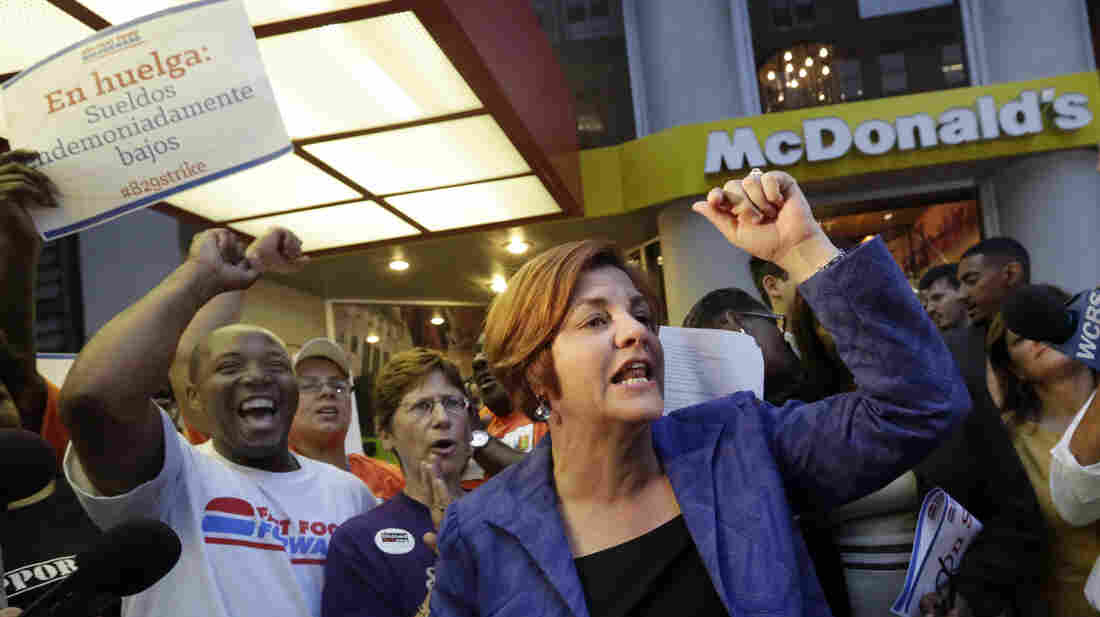 New York City Council speaker and then-mayoral candidate Christine Quinn speaks at a fast-food workers' protest outside a McDonald's in New York in August. A nationwide movement is calling for raising the minimum hourly wage for fast-food workers to $15. Richard Drew/AP hide caption 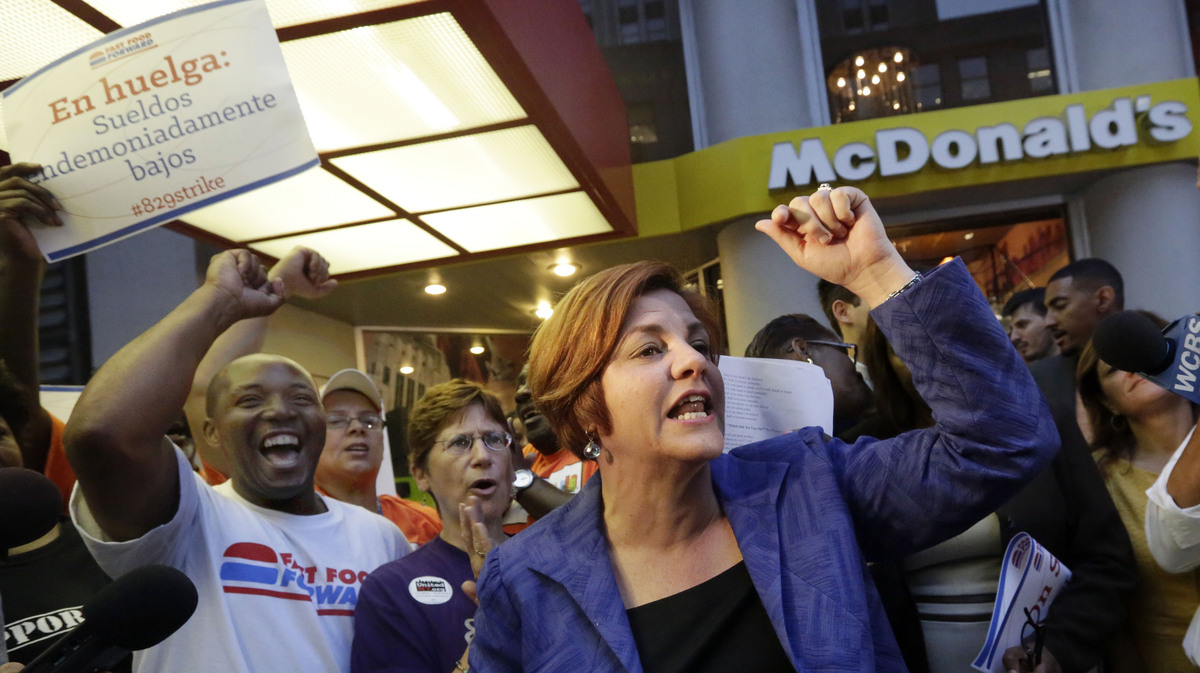 New York City Council speaker and then-mayoral candidate Christine Quinn speaks at a fast-food workers' protest outside a McDonald's in New York in August. A nationwide movement is calling for raising the minimum hourly wage for fast-food workers to $15.

If you hit the drive-through, chances are that the cashier who rings you up or the cook who prepared your food relies on public assistance to make ends meet.

A new analysis finds that 52 percent of fast-food workers are enrolled in, or have their families enrolled in, one or more public assistance programs such as SNAP (food stamps) Medicaid or the Children's Health Insurance Program (CHIP).

That's right: With a median wage of $8.69 per hour for front-line fast-food jobs — cooks, cashiers and crew — workers are taking home a paycheck, but it's not enough to cover the basics, according to the authors of "Fast Food, Poverty Wages."

"The taxpayer costs we discovered were staggering," says co-author Ken Jacobs of the Center for Labor Research and Education at the University of California, Berkeley.

"The combination of low wages, meager benefits and often part-time hours means that many of the families of fast-food workers have to rely on taxpayer-funded safety net programs to make ends meet," Jacobs told me by phone.

The report finds that the fast-food industry's low wages, combined with part-time hours and lack of health care benefits, creates demand for public assistance including $3.9 billion per year in Medicaid and Children's Health Insurance Program (CHIP) benefits. Add on another billion for the Supplemental Nutrition Assistance Program (SNAP), formerly known as food stamp assistance. Earned Income Tax Credit payments (a subsidy to low-wage workers) amount to about $1.95 billion per year.

Contrary to the assumption that the typical fast-food worker is a teenager living with his or her parents, the report finds that the vast majority of front-line fast-food workers are adults who are supporting themselves — "and 68 percent are the main wage earners in their families," Marc Doussard of the University of Illinois at Urbana-Champaign, a co-author of the paper, says in a press release about the study.

McDonald's President Was Caught Off Guard By Low-Wage, Single Mom

He says about a quarter of those working these jobs in fast-food restaurants are parents supporting children at home.

The report was funded by Fast Food Forward, a group campaigning for higher wages.

The analysis comes as a campaign for $15 per hour wages has garnered significant attention around the country. Over the past year, workers in cities nationwide have temporarily walked off their jobs to protest low wages.

But some more conservative-leaning economists say raising wages would do nothing to curtail the taxpayer spending on public assistance programs.

"I don't think raising the minimum wage to $15 an hour would solve that problem," Michael Strain, a resident scholar at the American Enterprise Institute, told me during a phone interview. He describes himself as a center-right economist.

Strain says raising wages to that level would have unintended consequences: Namely, fast-food companies would slow down their hiring. And this would lead to more workers looking for jobs — and potentially needing to rely on more public assistance.

Strain says the $7 billion taxpayer bill is not necessarily problematic.

"I think the system seems to be working the way it is — not that it's working perfectly," he says, adding, "In general, the government is making sure these people's basic needs are met, which is an appropriate role of government."

At the same time, Strain argues, fast-food businesses are paying their workers wages that they judge to be equal to the value these workers are adding to the production process.

"If we were to raise the minimum wage to $15 an hour, I think most economists, including me, would argue that that would result in a lot fewer workers," since fast-food companies would slow down on hiring.

"I think there's very good evidence on what's happened when wages have been improved for low-wage and fast-food workers," Jacobs says.

He points to a fast-food company, In-N-Out Burger, as an example of an employer that pays higher-than-average wages, yet is still profitable.

And, Jacobs says, some municipalities are raising minimum wages, such as San Jose, Calif., where the minimum wage is set to increase to $10.15 per hour in January of 2014. And there are proposals in states including Maryland to phase in hourly minimum wage hikes as well.

Jacobs argues that it's possible that employers may see a small decline in profits, but when wages are raised, "you do find a significant decline in turnover [of workers], which is cost-saving for employers."