Accessibility links
So What Happens If The Movement To Label GMOs Succeeds? : The Salt The campaign to label foods containing genetically modified organisms is gaining ground in some parts of the U.S. But GMO ingredients are found in some 70 percent of foods we buy in the U.S. Would a ubiquitous GMO label scare off consumers, or would they learn to accept it and buy anyway?

Listen
So What Happens If The Movement To Label GMOs Succeeds? 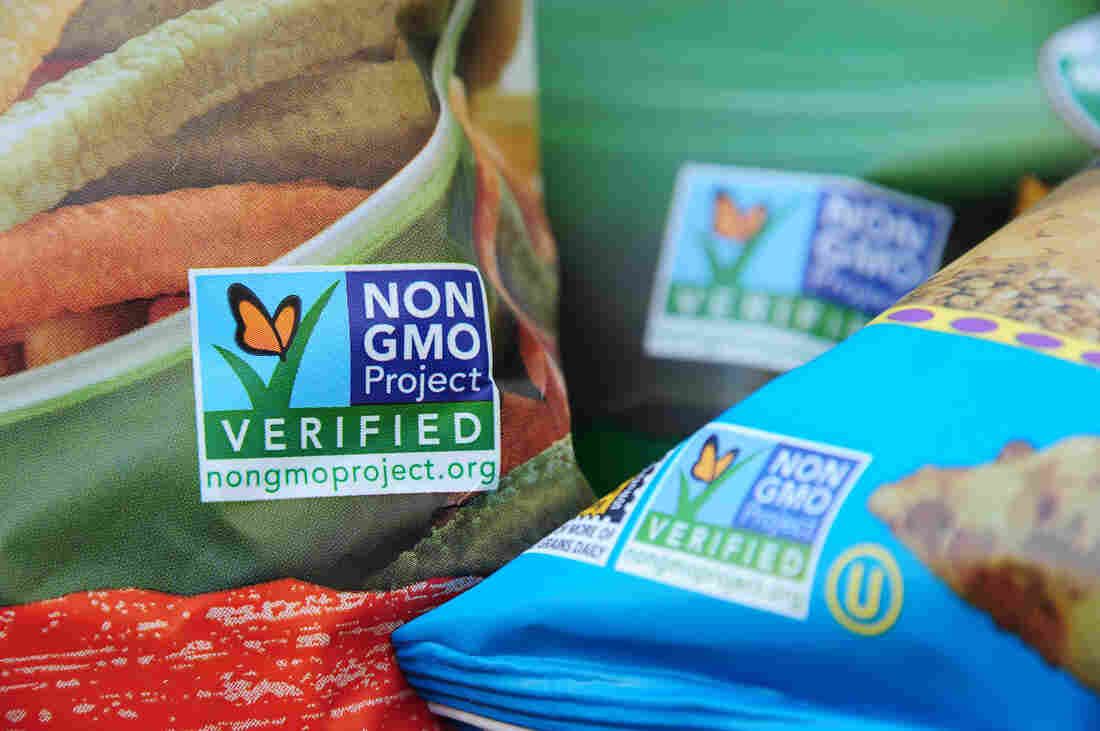 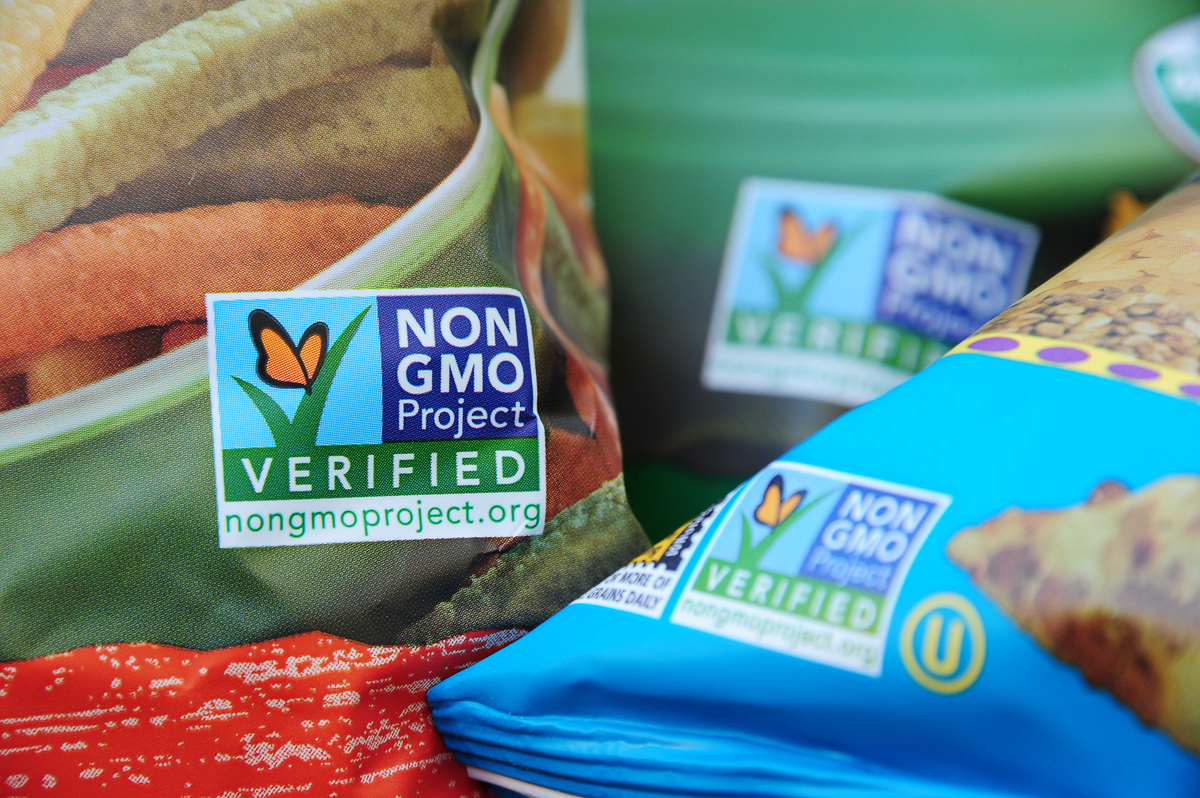 Labels on bags of snack foods indicate they are non-GMO food products.

I have a story on All Things Considered Wednesday (click on the audio link above to hear it) about the campaign to put labels on food containing genetically modified organisms, or GMOs. The idea is gaining ground in the Northeast — Maine and Connecticut passed labeling laws this summer, though they won't take effect unless more states do the same. And GMO labeling is on the ballot this November in Washington state.

One aspect I didn't have room for in the radio story is the question of what might happen if the movement succeeds. In the U.S., something on the order of 70 percent of our food already contains at least some GMO ingredients, so the GMO label would suddenly become ubiquitous on most grocery shelves. How would consumers react?

The foes of genetic engineering hope America's experience will mirror Europe's. GMO food is legal, there, but it has to be labeled, and marketers are wary of consumer backlash. So GMO foods are rare.

But America isn't Europe. For one thing, Americans have been eating GMO foods since 1996, without strange side effects. Critics say GMOs haven't been tested enough, but the verdict of mainstream science is that they're safe to eat. Just last month, Scientific American ran an editorial emphasizing this point and decrying "unfounded fears."

Even Michael Pollan agrees on that front. "I haven't seen any evidence that's persuaded me that there's any danger to health," says the food journalist, who's become a kind of hero for the organic and local-food movements. He doesn't like GMOs, and he's quick to add that he thinks they need more testing. But he says arguments about possible health effects miss the larger point.

"I don't think this is a fight about science, he says. "I think it's a fight about transparency — people who want to know where their food comes from should have this information."

And one other thing to keep in mind is that the U.S. already has a de facto "Non-GMO" label: organic. Organic foods may not contain any genetically modified organisms. It may turn out that the consumers who would avoid GMO labels have already taken their business to Whole Foods.

Proponents of mandatory labeling say that's not enough. Andrew Stout, founder of Full Circle farm, an organic produce company outside Seattle, says people who don't have access to organic food — or can't afford it — still deserve to know whether they're eating GMOs.

"It's no different than just having sodium, salt, artificial flavors and artificial colors, country of origin," Stout says. "Consumers look for that kind of information and make their own individual choices."

But genetic engineering is different. It's not an ingredient — it's a technique. Genetic modifications can change plants and animals in any number of ways: Corn modified to resist a certain weed killer is not the same as rice that's been reprogrammed to contain more vitamin A. They're beneficial — or risky — in completely different ways. Mandatory labels might mislead consumers to lump all GMOs together.

That's one of the main arguments presented by the anti-labeling campaigns. The other is the potential increase in production costs. That's the concern of former Washington state agriculture director and full-time farmer Dan Newhouse. As a farmer who grows some GMO and some non-GMO, he says it's going to be hard work keeping them separate. He imagines moving a harvester from a field of one kind of corn to the other.

Opponents of mandatory labeling say the extra effort would increase the price of food by an average of $450 a year, for a family of four. While an independent study by the Washington State Academy of Sciences agreed that labeling would come with a cost, it noted that it's impossible to calculate how much that cost would be.

Given the prevalence of GMO ingredients in American food, some manufacturers may skip the cost of keeping things segregated, and simply slap a GMO label on everything. That option may become especially attractive if it turns out consumers aren't put off by the label. (You know those err-on-the-side-of-safety warnings about candy bars that are made in a facility that also processes nuts? Just substitute "GMO" for nuts, and you see where this might go.)

"The psychological research ... suggests that when you give people choice over risk, they're less afraid of it," says David Ropeik, a writer who specializes in how people assess risk. "Assuming that [the label] was something short of a skull and crossbones, it's likely that many people would accept it and say, 'Fine, I'll buy it!' "

If you doubt it, he says, then think about all the other things that come with scary labels — things you end up buying anyway.