Accessibility links
A Fight Over Vineyards Pits Redwoods Against Red Wine : The Salt Environmental groups in Northern California are suing to stop a winery from leveling 154 acres of coast redwoods and Douglas firs to make way for grapevines. As climate change heats up California's interior valley, the wine industry is creeping toward the coast, where majestic redwoods grow. 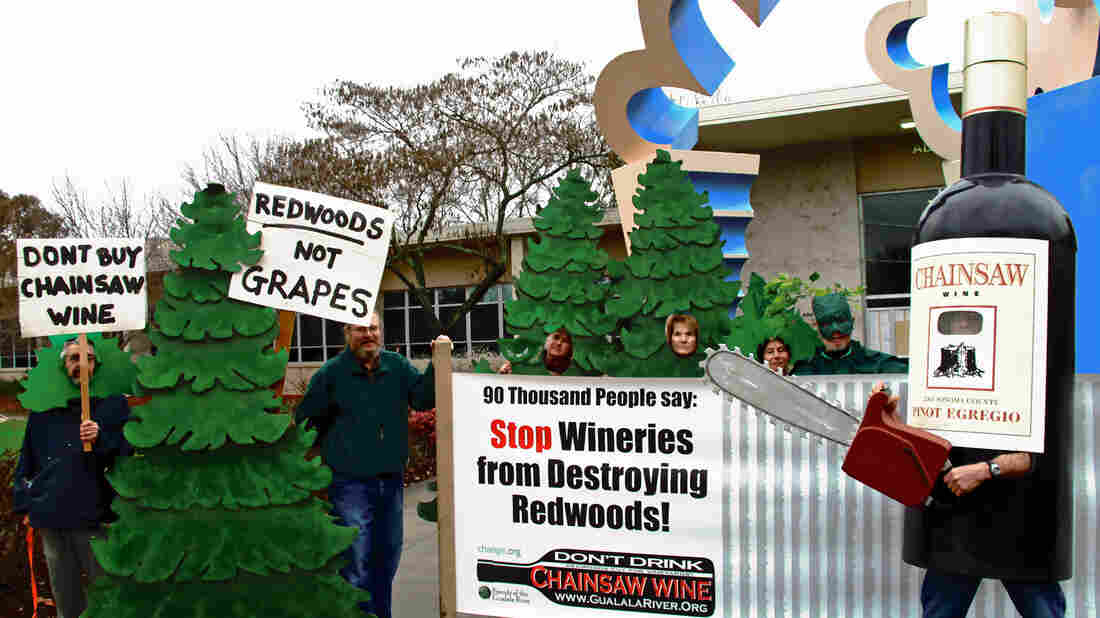 Environmental groups are fighting to stop the leveling of 154 acres of coast redwoods and Douglas firs to make way for grapevines. Courtesy Friends of the Gualala River hide caption 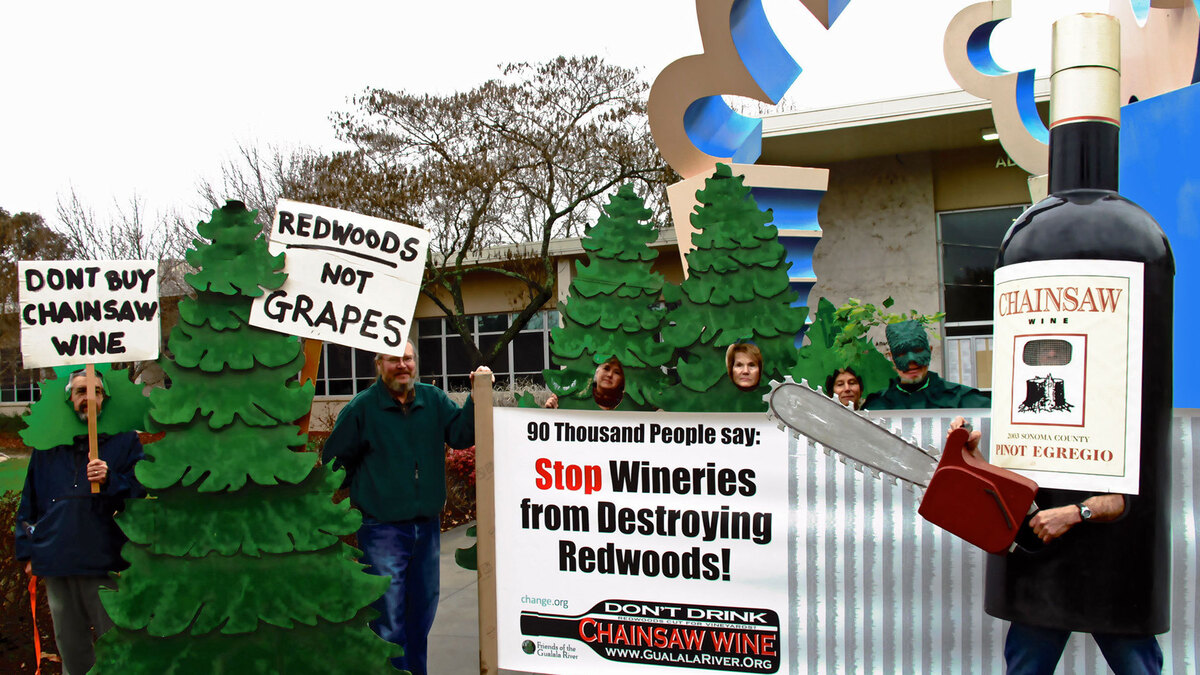 Environmental groups are fighting to stop the leveling of 154 acres of coast redwoods and Douglas firs to make way for grapevines.

Courtesy Friends of the Gualala River

This Friday morning, a coalition of environmental groups are in a Santa Rosa, Calif., courtroom fighting to stop a Spanish-owned winery from leveling 154 acres of coast redwoods and Douglas firs to make way for grapevines.

Redwoods only grow in the relatively cool coastal region of Northern California and southern Oregon. Parts of this range, such as northwestern Sonoma County, have become increasingly coveted by winemakers.

Chris Poehlmann, president of a small organization called Friends of the Gualala River, says the wine industry is creeping toward the coast as California's interior valleys heat up and consumers show preferences for cooler-weather grapes like pinot noir.

"Inexorably, the wine industry is looking for new places to plant vineyards," says Poehlmann, whose group is among the plaintiffs.

California's Department of Forestry and Fire Protection, or CalFire, approved the redwood-clearing project in May 2012.

"So we sued them," says Dave Jordan, the legal liaison for the Sierra Club's Redwood Chapter, another of the plaintiffs. The Center for Biological Diversity is the third plaintiff.

The groups filed suit in June 2012 on the grounds that state officials violated California's environmental protection laws by approving the plan.

Redwoods are considered among the most spectacular of all trees. The biggest trees on Earth by height, redwoods can stand more than 350 feet tall. Some are more than 2,000 years old.

However, the redwoods at the center of this conflict are not old-growth trees. The area was clear-cut more than 50 years ago, and most of the redwoods on the site are less than 100 feet tall. Which is why Sam Singer argues: "There are no forests [on this site]."

Singer is a spokesman for Artesa Vineyards and Winery, which is owned by the Spanish Codorniu Group and which first proposed the development project in 2001. Singer says that the two old-growth redwood trees on the property will be spared.

But the thousands of trees slated for removal are between 50 and 80 feet tall, according to Poehlmann. He says the trees provide wildlife habitat and stabilize the soil against erosion, which has been a major problem for streams in the area that once harbored runs of salmon and steelhead trout. 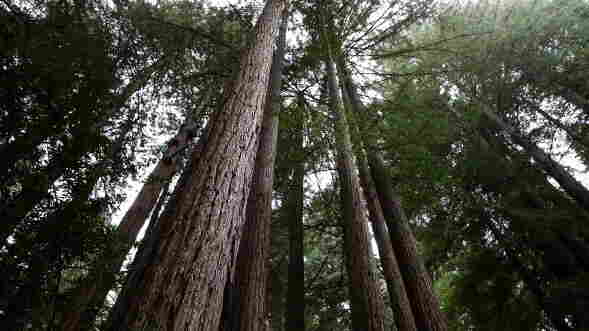 Coast redwood trees stand at Muir Woods National Monument in Mill Valley, Calif. Redwoods are the biggest trees on Earth by height — they can grow more than 350 feet tall. But their range is quite limited: They only grow along the coast of Northern California and southern Oregon. Justin Sullivan/Getty Images hide caption 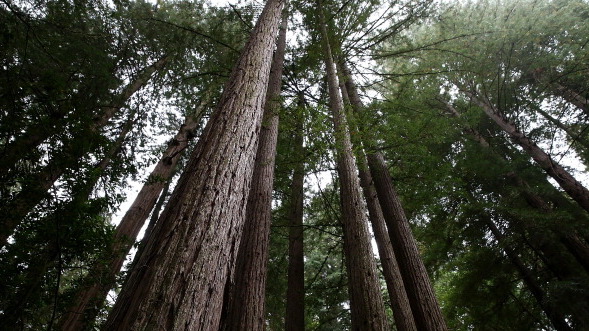 Coast redwood trees stand at Muir Woods National Monument in Mill Valley, Calif. Redwoods are the biggest trees on Earth by height — they can grow more than 350 feet tall. But their range is quite limited: They only grow along the coast of Northern California and southern Oregon.

The project planners have even estimated this timber to represent 1.25 million board feet of "merchantable" lumber.

Dennis Hall, a higher official with CalFire, says his department's approval of Artesa's project in 2012 came only after a lengthy review process found that it would not significantly damage the environment.

Still, Poehlmann feels CalFire has been too lenient on proposals by developers to level trees. "They are acting as if they are actually the 'department of deforestation,' " he says.

The tensions go beyond this case: Friends of the Gualala River and the Sierra Club's Redwood Chapter have gone to court several times in the past decade to successfully stop timberland conversion projects proposed by winery groups and which had been approved by the state. Among these fights was the battle to save the so-called Preservation Ranch, a 19,000-acre parcel that developers planned to partially deforest and replant with vines. Earlier this year, the developer sold the property to The Conservation Fund.

But from 1979 to 2006, 25 conversions of forest to agriculture occurred in Sonoma County at an average rate of 21 acres per year, according to county officials.

At least a few tree-clearing projects have occurred without permission. High-profile winemaker Paul Hobbs didn't bother getting a permit before he leveled 8 acres of redwoods in 2011 with plans to plant wine grapes. He remains a superstar winemaker and was tagged earlier this year by Forbes as "The Steve Jobs of Wine."

And it's not just redwoods that are at stake as vineyards expand their terrain. California's oaks aren't subject to the same environmental protections as more commercially valuable species like redwoods and Douglas fir, according to CalFire's Hall. And Northern California's oak forest, near the coast as well as inland, is being lost at fast rates to vineyard expansions, says Adina Merenlender, an environmental biologist with the University of California, Berkeley.

Merenlender says oak trees tend to be overlooked by the general public, which is more easily impressed by redwoods. Yet oak forests, she says, provide habitat for vastly more species than do redwood forests.

Sara Cummings with the Sonoma Vintners, a wine industry trade group, says new vineyards are usually planted within what she calls the region's "agricultural footprint" — land that is already designated by county planners as "agricultural." Moreover, she says, more than half the county's wine growers are members of the California Sustainable Winegrowing Program.

But Merenlender is concerned about future expansion into land not previously farmed.

"We're already seeing a lot of acquisition of coastal lands," she says. "Investments are moving north and west, toward the coast."

The issue, it seems, is a global one. A 2013 study predicted that global warming will cause a dramatic shift in the world's wine regions. The report warns that wilderness areas in British Columbia and remote regions of China — one of the world's fastest-growing winemaking regions — may become increasingly coveted by the industry.

"But at least we'll have plenty of wine to drink, "Poehlmann quips, "while we bemoan the fact that our forests are all used up."