Accessibility links
Meatless Monday Movement Gets More Veggies On The Menu : The Salt In 2003, one of the original Mad Men began working with the Johns Hopkins School of Public Health to encourage people to go meatless one day of the week. In 10 years, the campaign can now point to hundreds of schools and restaurants that promote a vegetarian option on their Monday menus. 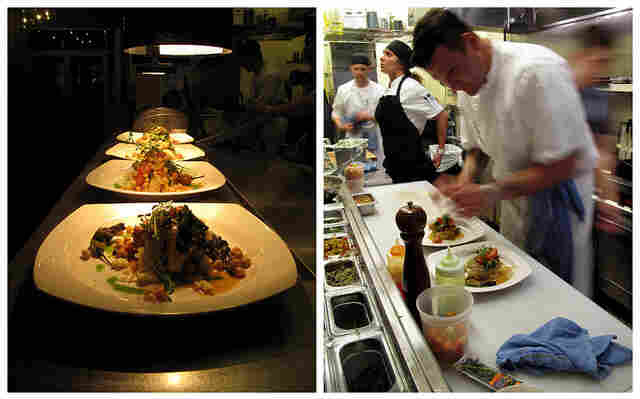 Chef Matthew Taylor in the kitchen of Benson Brewery, in Omaha, Neb., which promotes a meatless option every Monday. Left, a meatless entree, seitan piccata, at the brewery, ready to be served. Courtesy of Vegan Omaha hide caption 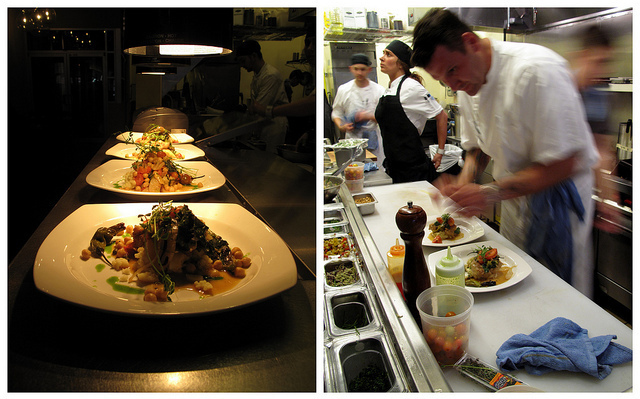 Chef Matthew Taylor in the kitchen of Benson Brewery, in Omaha, Neb., which promotes a meatless option every Monday. Left, a meatless entree, seitan piccata, at the brewery, ready to be served.

America's relationship with meat is an indulgent one. At 270 pounds of meat per person per year, Americans consume more than almost anyone else in the world. (Mostly, we have our livestock producers' successes to thank for making meat cheap and abundant for us.)

But as we've often reported on this blog, the conversation about our meat consumption is increasingly turning critical. From Bill Gates to health researchers to the United Nations, the meat that dominates our plates is being called excessive and detrimental to health, the environment, the animals we raise for food and rural economies.

Chiming in to this critique since 2003 is the Meatless Monday campaign, a partnership between an advertising whiz and the Johns Hopkins School of Public Health to market dietary change. The campaign, which celebrates its 10th anniversary this month, encourages cutting out meat one day a week to improve health and the environment.

Why Monday? Because several studies have demonstrated that people are more likely to try to quit smoking, begin a diet or exercise regimen, schedule doctors' appointments or adopt other healthy behaviors on Monday than any other day.

And while many Americans may never have heard of Meatless Monday or reject the idea of avoiding meat one day a week, the campaign points to many feathers in its cap.

Meatless Monday is now active in 29 countries. And in the U.S., more than 100 schools, food service companies and restaurants, including Mario Batali's famed eateries, have signed on to offer Meatless Monday options, according to the campaign. For many, this hasn't meant eliminating meat entirely from the Monday menu. And that's just fine with the campaign.

"Overall, whether it's meatless or flexitarian, we are promoting more plant-based options and less meat and fat," says Peggy Neu, president of The Monday Campaigns, which includes Meatless Monday.

As NPR reported in 2010, The Monday Campaigns were founded by Sid Lerner, 82, who decided to use his advertising savvy for public health when he learned about the risks and environmental concerns about high meat consumption in the U.S. Lerner was one of the original Mad Men of Madison Avenue, best known for his "Squeeze the Charmin" toilet paper campaign. (For more on Lerner's career, watch this video produced by his alma mater, Syracuse University.) 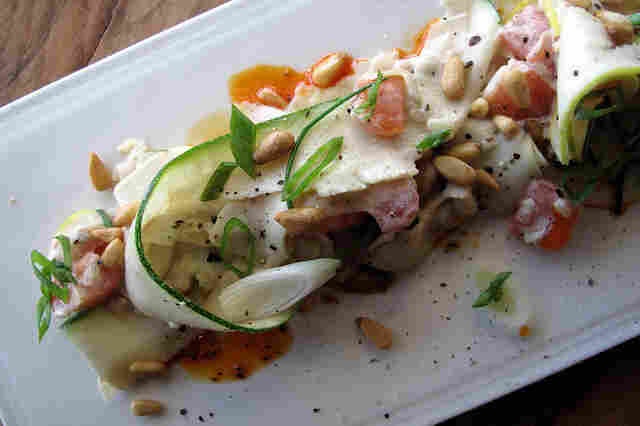 One of the meatless dishes prepared at Benson Brewery in Omaha, Neb., for Meatless Monday is zucchini ribbon salad with a dressing made from roasted garlic and tahini, and garnished with green onions and toasted pine nuts. Courtesy of Vegan Omaha hide caption 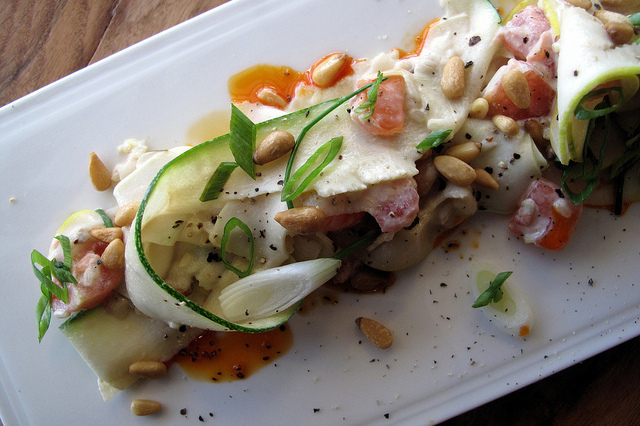 One of the meatless dishes prepared at Benson Brewery in Omaha, Neb., for Meatless Monday is zucchini ribbon salad with a dressing made from roasted garlic and tahini, and garnished with green onions and toasted pine nuts.

At a symposium to celebrate Lerner and Meatless Monday's 10-year anniversary at Johns Hopkins on Thursday, Neu, who also comes from the advertising industry, said everyone on the team has been astonished by the success of the Meatless Monday idea and how much it has spread on its own.

"It's rare that you get a big idea like this one that gets as much grass-roots traction as this one has," said Neu. Even Johns Hopkins dean emeritus Alfred Sommer remarked on the unique effectiveness of the Meatless Monday idea: "There are not many behavior change health issues that transcend like this one."

Here at NPR, our caterer Guckenheimer voluntarily embraced Meatless Monday and offers a vegetarian entree every day. According to Guckenheimer's chief marketing officer, Karla Lacey, between 15 and 20 of the company's accounts get Meatless Monday options.

"In some ways, Meatless Mondays were a great way to train people to notice and try non-meat options," Lacey tells The Salt in an email. "Once they get more familiar with them, we start integrating the non-meat options into the menus every day."

It can be extremely tricky to measure the impact of any campaign aimed at changing behavior. But The Monday Campaigns tried to do so in 2012 by hiring the FGI Research firm to conduct an online survey of 1,000 American adults. Some 43 percent said in the survey they were aware of Meatless Monday. And among those, 36 percent said the campaign has influenced their decision to cut back or consider cutting back on meat.

But the survey's most significant finding, according to the campaign? Some 62 percent of respondents who said they were influenced by Meatless Monday report that they've tried to incorporate it into their weekly routine.

The meat industry, meanwhile, has questioned the true reach of the campaign. In a report released Oct. 17, the Animal Agriculture Alliance said that Meatless Monday has "grossly misrepresented" its enrollment and prevalence. According to AAA, several of the institutions listed on the campaign's website as participants told the meat industry trade group that they had either never heard of Meatless Monday or had ended the program.

Neu readily admits that the Meatless Monday campaign has been unpopular in some places, including college campuses where meat was eliminated from the menu on Monday and students didn't have any choice. "But even in those places where there's pushback, it's starting a dialogue about whether we should be eating so much meat."

The AAA report wasn't the first time industry has taken a swipe at the movement. As our friends over at the Two-Way reported, the industry pressured the U.S. Department of Agriculture into redacting its endorsement of the movement in an internal newsletter last summer.

The true influence of the movement aside, there may be a broader societal trend happening to reduce meat consumption. Since 2008, Americans have been eating less meat per person. We found that in our own poll conducted in 2012, where 3,000 adults across the country were asked about their meat consumption as part of an NPR-Truven Health Analytics Health Poll. Our poll found that 39 percent said they eat less meat than they did three years ago. (Some 55 percent said their meat intake hasn't changed in the past three years.)

Among those who are eating less meat, 66 percent said they're worried about the health effects; 47 percent said cost is a factor, while 30 percent were concerned about animal welfare, and 29 percent have limited their meat intake out of a concern for the environment.