Accessibility links
Soylent: An Offbeat Food Idea Investors Are Taking Seriously : The Salt Inventor Rob Rhinehart has raised $1.5 million in seed funding for his powdered food alternative. He and his investors say there's a big market for his product: time- and cash-strapped people currently living on takeout. 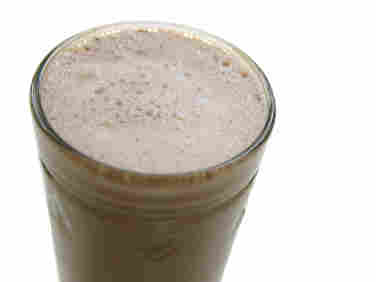 Back in April, we described Rob Rhinehart's experiment concocting something that could give him all the nutrition and none of the hassle of food.

Rhinehart, you see, is a 25-year-old electrical engineer in San Francisco who'd grown exceedingly frustrated with the time and effort of purchasing, preparing and consuming food, not to mention the cleanup. When he went in search of a cheap, nutritious powdered food product he could whip up, he found nothing. So he decided to make one himself.

Last week, Rhinehart announced on his blog that he had raised $1.5 million in seed capital from several venture capital and angel investor firms in Silicon Valley, including Andreessen Horowitz and Initialized Capital, to scale up production of his product, called Soylent. He added that he'd gotten another $1.5 million in pre-orders.

Apparently, his off-the-wall idea has some legs.

We were among Rhinehart's skeptics, we'll admit. We weren't sure that a layperson could come up with a meal replacement product equivalent to a diverse diet of real food.

But in the months since he first announced his project, he's gotten a ton of feedback on his formulation. (Here's one account from someone who tried two weeks on Soylent.) And he's also discovered that there are a lot of people out there likely to buy it.

Among them are young singles like him who are working 60-plus hours a week and paying off student loans. In other words: people with no time or interest in cooking, and little disposable income for restaurants.

Since we last spoke, Rhinehart has adjusted his pitch a bit. Rather than calling Soylent an "ideal diet," he's calling it a healthier, convenient alternative to takeout and rice and beans — the food he used to subsist on, and the food he believes his target market consumes regretfully.

"I'm not demanding that anybody live on this exclusively," he says. "It's supposed to be an easy staple meal."

And as for the people who were shocked, even rankled, by Rhinehart's assertion that he knew what the human body needed, he's thrown them a bone.

He now has a team of advisers, including a doctor to help him get the nutrient ratios right: Xavier Pi-Sunyer at the Institute of Human Nutrition at Columbia University. One of the big changes he made was to the amount of omega-6 and omega-3 fatty acids in the formulation.

Soylent's main ingredient is oat starch; the rest are industrial nutrients like calcium carbonate and magnesium gluconate. It's gluten-free, vegan and halal. "It's supposed to be something anyone can enjoy," Rhinehart says.

The product might still draw criticism for its lack of disease-fighting phytonutrients found in fresh fruits and vegetables. "I wanted to keep it to bare essential nutrients," says Rhinehart. "At this point, until we know more about phytonutrients, it's better to stick to strictly essentials."

Rhinehart has now been consuming Soylent for about 10 months. He says he makes two to four shakes a day, during the week. (His fridge contains only Soylent, water and beer, he claims.) On the weekend, he goes to restaurants with friends — what he calls recreational eating.

After a few months of Soylent, Rhinehart wrote that he felt better than he'd ever felt, physically and mentally. And today?

"Back then, I was coming off a terrible diet, but yeah, I still feel great," he says. "I still get blood tests, body metrics, and everything still looks good."

Come December, Soylent will begin shipping to everyone who has pre-ordered it. (The cost is about $65 for a week's supply of meals, or about $3 a meal.)

And Rhinehart will be moving from San Francisco to Los Angeles, where warehouse space is cheaper, he says. And will those famous LA tacos tempt him to give up Soylent during the week, we had to wonder?

"I like food, I really do," says Rhinehart. "There are just other things I find more interesting right now. Food is not nutrition to me, it's art. After I finish paying off my student loans I'll go to more art galleries and I'll eat more food."