Accessibility links
Startups Try To Reroute Food Waste To The Hungry : The Salt Forty percent of food in the U.S. goes uneaten each year. The major problem is also a major opportunity for startups like Food Cowboy and CropMobster, which are trying to cash in by connecting sellers of excess food to people in need of it. 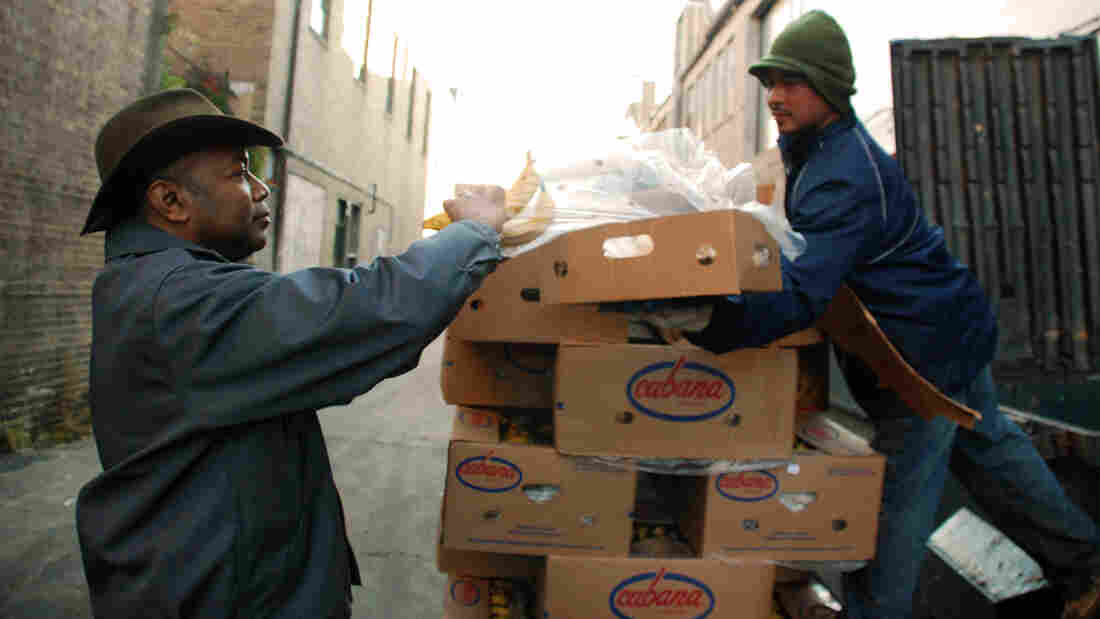 Roger Gordon (left) is offered a box of bananas from a worker who was throwing away the lightly speckled fruit at Mexican Fruits in Washington, D.C. Gordon's startup, Food Cowboy, works with truckers to divert edible produce from landfills to food charities. Serri Graslie/NPR hide caption 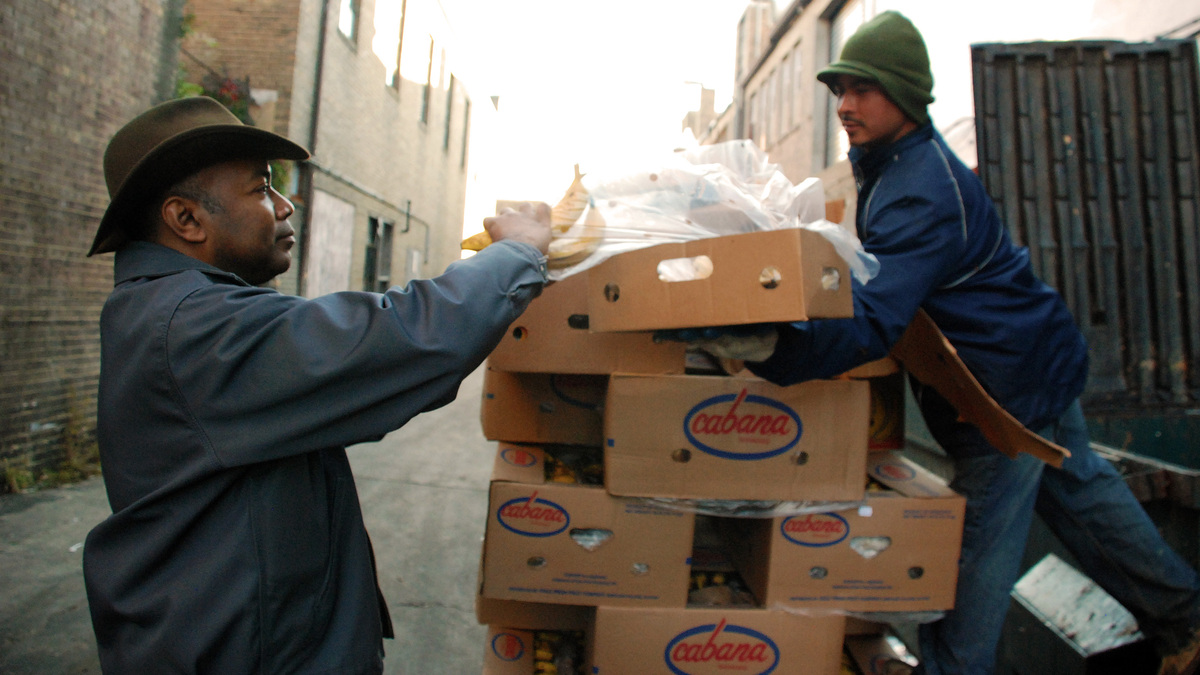 Roger Gordon (left) is offered a box of bananas from a worker who was throwing away the lightly speckled fruit at Mexican Fruits in Washington, D.C. Gordon's startup, Food Cowboy, works with truckers to divert edible produce from landfills to food charities.

In an alley in Northeast Washington, D.C., hundreds of pounds of produce are piled haphazardly on pallets. Mexican Fruits, a discount grocer, can't sell the fruit and vegetables inside these boxes because the food has gone soft or is lightly bruised. Some will be donated, but most boxes are destined for a large, green Dumpster nearby.

Before it gets tossed, Roger Gordon grabs one box of lightly speckled bananas. Gordon is the co-founder of Food Cowboy, a startup that's trying to redirect discarded food from Dumpsters to hunger relief groups. He's here at Mexican Fruits because he's hoping the grocer will call him the next time it has this problem.

"We want to set ourselves up as air traffic control for food," says Gordon, who's based in the Washington, D.C., area.

According to a report by the Natural Resources Defense Council, 40 percent of food in the U.S. goes uneaten. And many see this wasted food as a business opportunity — from startups like Food Cowboy and CropMobster to the former president of Trader Joe's, who is opening up a market. But although food waste is an obvious problem, it's a complicated one to solve, whether you're targeting farmers, retailers or consumers.

In the retail food world, a lot of waste happens because distributors don't have time to find a home for the perishable food stores won't accept.

Gordon's brother, Richard, came to understand this firsthand. In his work as a trucker, he hauls "kicked" loads of food rejected by retailers often just for aesthetic reasons. If the load is small enough, he can take it home. But if it's large, his distributor might instruct him to drop it at the nearest Dumpster or landfill.

Convinced there should be a better way, the brothers started working together to scout out nearby food charities along Richard's trucking route. "The trucker is under time pressure. ... But oftentimes the charity is just a few miles away from where the shipment has been rejected," he says. "It's just that the truckers don't know about it." 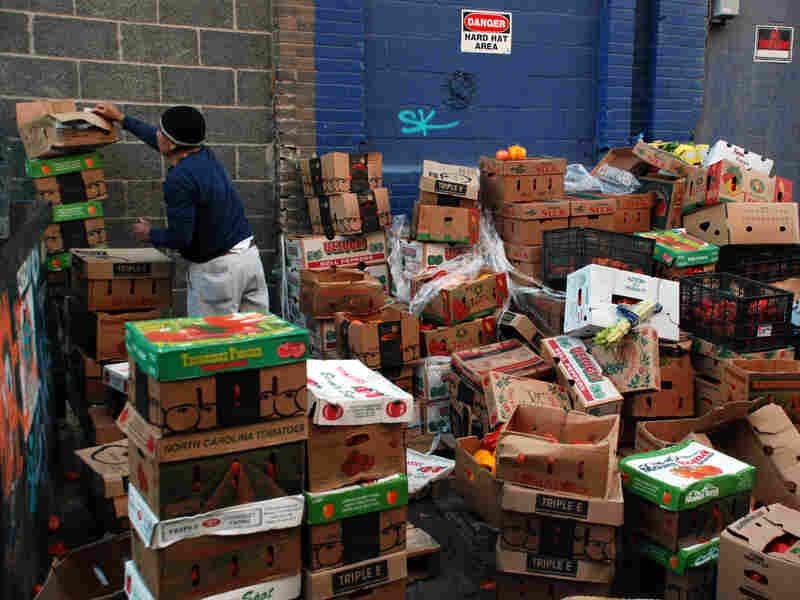 Boxes of unsold produce sit stacked outside Mexican Fruits, a discount grocer. A few loads will be donated to churches but the rest will be thrown away. Serri Graslie/NPR hide caption 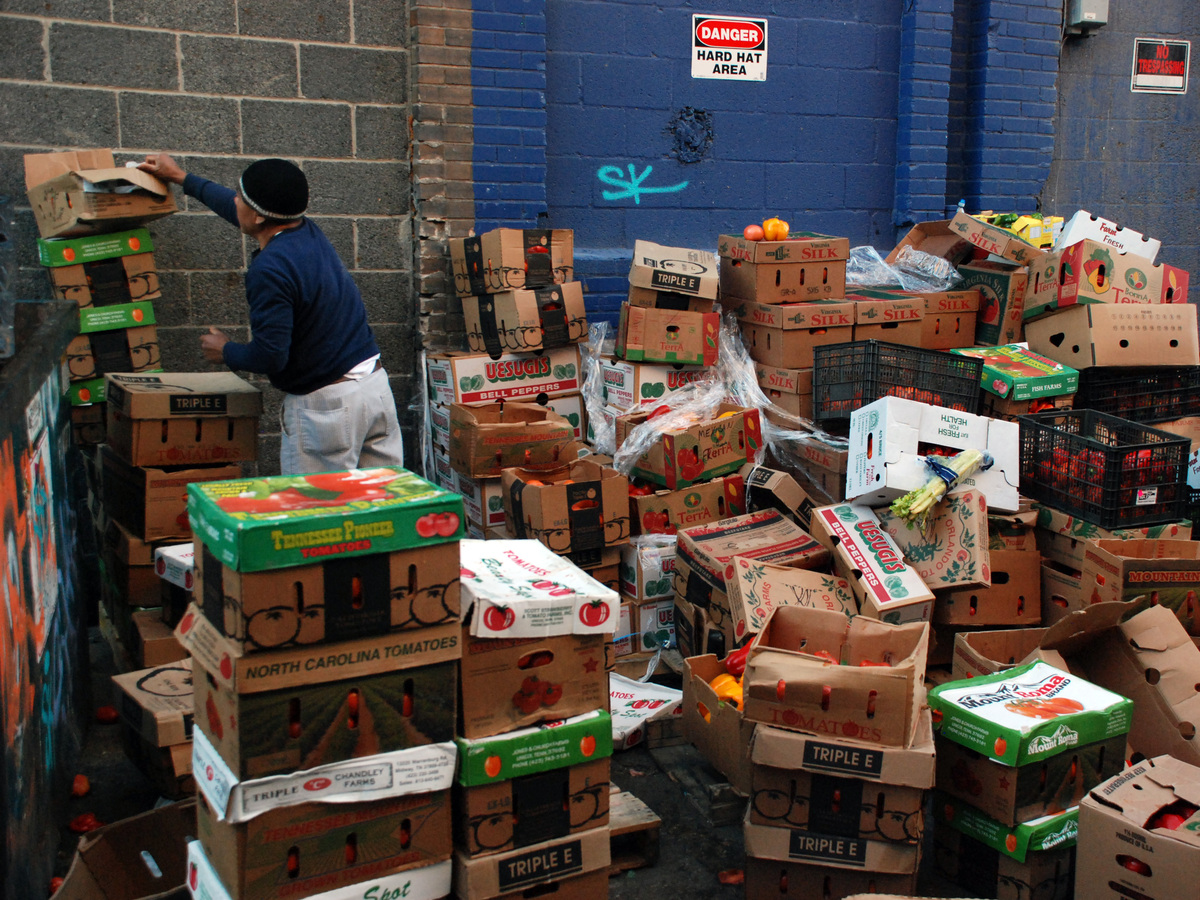 Boxes of unsold produce sit stacked outside Mexican Fruits, a discount grocer. A few loads will be donated to churches but the rest will be thrown away.

To help make these connections, Food Cowboy has built a website where food companies, truckers and charities can find each other. Food Cowboy makes money by taking a small commission from the transactions. For 10 cents a pound, a food bank can buy as much from Food Cowboy as they can store.

But there are still challenges. Gordon says it has been difficult to get food retailers on board. Many are concerned they'll be blamed if someone gets sick. And even though there is a federal tax credit, the financial incentive may not be enough to sway them. Another major hurdle is convincing food charities to have flexible hours to receive a load on a trucker's 24/7 schedule.

"Dumpsters are always open. And there are more Dumpsters than food banks," Gordon says.

Food Cowboy had a soft start three months ago. So far, Gordon estimates its diverted about 300,000 pounds of food from landfills to food charities in Texas, Florida, Nebraska, Connecticut, New York and Georgia. The service launches nationwide this week; Gordon says its next iteration will be based on Twitter and have a compost component for the food too spoiled to save.

Like Food Cowboy, CropMobster connects people with excess food to others who can use it. The group uses an online message board, similar to Craigslist, where food producers, grocers and food charities can post ads in one of five categories: free, deal (meaning deeply discounted), wanted, donations or trade.

Co-founder Nick Papadopoulos tells The Salt he got the idea for the company while working on his family's farm in Petaluma, Calif., when he had to till excess food into the ground.

What started in one county six months ago is now open to people all over the Bay Area. Papadopoulos estimates his group has saved 100,000 pounds of food and generated $50,000 in new cash for the small businesses that have sold their surplus product on the site.

Earlier this month a rancher posted an ad for 35 percent off whole chickens when he ran out of freezer room. On the other end, a woman with 10 suburban apple trees used CropMobster to put a call out to gleaners who picked them clean within 12 hours.

Although the company is growing rapidly, no one working for CropMobster has been able to quit his or her day job yet. Papadopoulos says he wants to stay true to Crop Mobster's mission as he eyes expansion and angel investors and venture capitalists come calling.