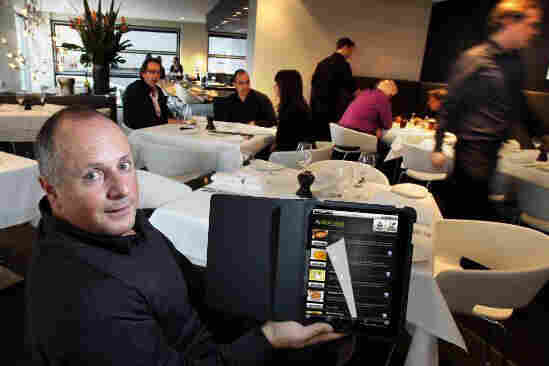 A restaurant customer tries out the Aptito app on a digital menu. Courtesy of Aptito hide caption 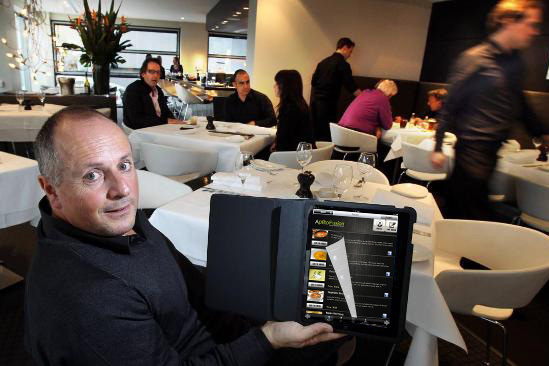 A restaurant customer tries out the Aptito app on a digital menu.

When you sit down at Chef José Andrés' tapas restaurant, Jaleo, in Washington, D.C., and ask to see the beverage options, as I did recently, you're in for a surprise. Instead of a traditional leather-bound menu, I was handed an iPad.

An app called SmartCellar guided me to search for wine by grape variety and climate zone. Selecting a bottle, I got details about the vintage and its producers, tasting notes written by the restaurant's wine team, pictures of the bottle or label, and food pairing suggestions.

Having all this information on hand was initially intimidating. What was I in the mood for? Did I want to splurge on a rare bottle from the illustrious, shuttered Spanish restaurant El Bulli? What was the back story on that Rioja? But as I immersed myself in the app, I got so into it that the waiter had to stop by three times before I was ready to order.

While paper menus, which have been around for centuries, still dominate the restaurant world, a growing number of restaurants are singing the praises of tablets to better serve their customers.

"There's a clear advantage to digital menus," says Lucas Paya, wine director for José Andrés' ThinkFoodGroup, which has been testing them at two of the company's 16 restaurants since 2012. "First, there's the amount of content you can display, which is impossible on paper. And there's the real-time capability. I can update the list at a moment's notice online from anywhere in the world." 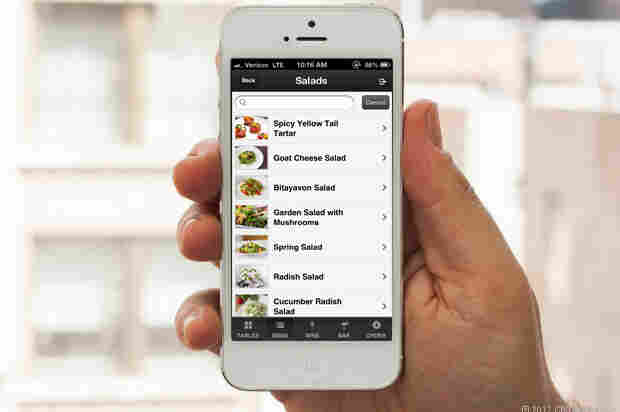 The Aptito app has intel on a restaurant's dishes and drinks, but diners can also use it to request a waiter's attention, ask to speak with the chef and leave reviews for the management. Courtesy of Apetito hide caption 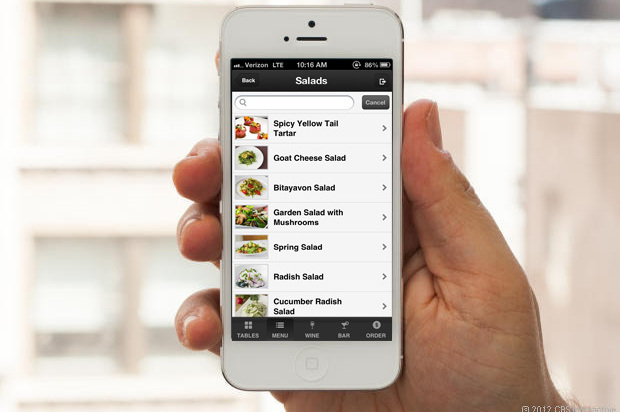 The Aptito app has intel on a restaurant's dishes and drinks, but diners can also use it to request a waiter's attention, ask to speak with the chef and leave reviews for the management.

Now that menus are going digital, plenty of apps and software are vying for restaurateurs' attention. There are MenuPad and eMenu for menus, and Uncorkd and Wine List for wine.

One of the most robust is Aptito, which rolled out in mid-2011. It has intel on dishes and drinks, but diners can also use it to request a waiter's attention, ask to speak with the chef and leave reviews for the management. "This allows restaurants to provide customer service at moment's notice," says founder and CEO Gene Zell. "You can save the customer's experience and make sure they come back."

Café Martorano in Fort Lauderdale, Fla., opted to build its own digital menu software in-house; it debuted on Acer tablets in mid-September. In contrast with Jaleo where the server has to process orders from a virtual shopping cart, diners at Café Martorano order directly through the tablet.

Each dish at the café has a photo and description, and suggested beverage pairings. "That way, if you're with a date and you don't know much about alcohol, you can still act like you know what you're doing," says owner Steve Martorano.

Empowering the diner turns out to be one of the greatest benefits, from the restaurant's perspective. "People who have been coming in for 20 years have told me they have always ordered the same thing," says Martorano, "simply because they didn't know what guanciale was or what a certain kind of pasta was." And the menus also seem to encourage people to spend more: Since they debuted, Martorano says he has seen a 23 percent increase in sales.

Despite the bounty of content these new digital menus offer, there are some advantages to the paper version, which first appeared in Europe in the late 18th century. Each of Jaleo's iPads costs approximately $500, which makes them tempting targets for thieves. So far, the restaurant has had four stolen. "Now we don't use them at outside tables where the thefts occurred," says Paya. "They still get paper."