Accessibility links
A Japanese iPhone Gadget Teases The Tummy With Food Smells : The Salt Scentee draws power from an iPhone to blast you with the smell of hearty meat or lavender. But could the synthetic smell of meat trick your brain into thinking you're eating meat instead of plain rice? 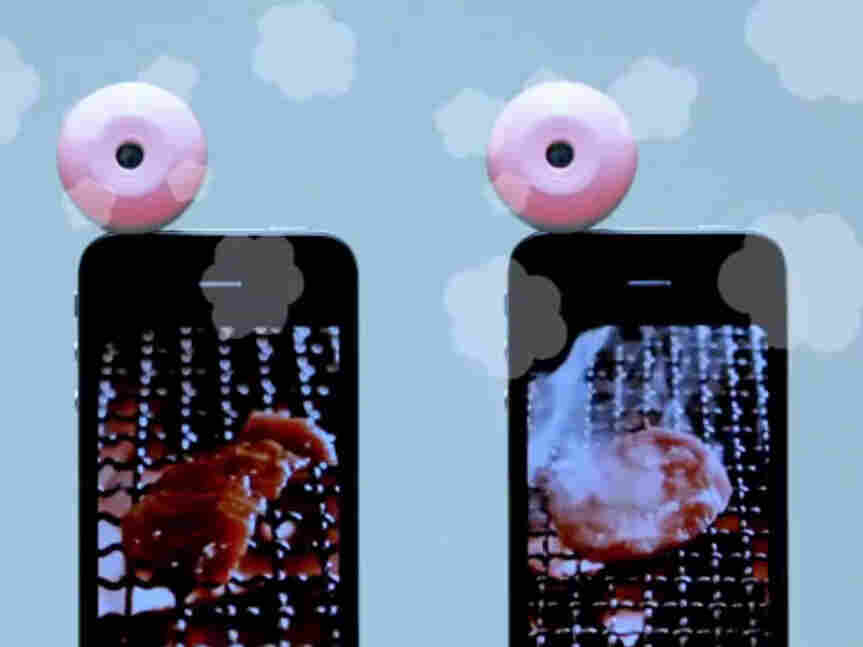 Simply plug the Scentee device into your iPhone jack and let the scent of grilled meat waft your way. YouTube hide caption 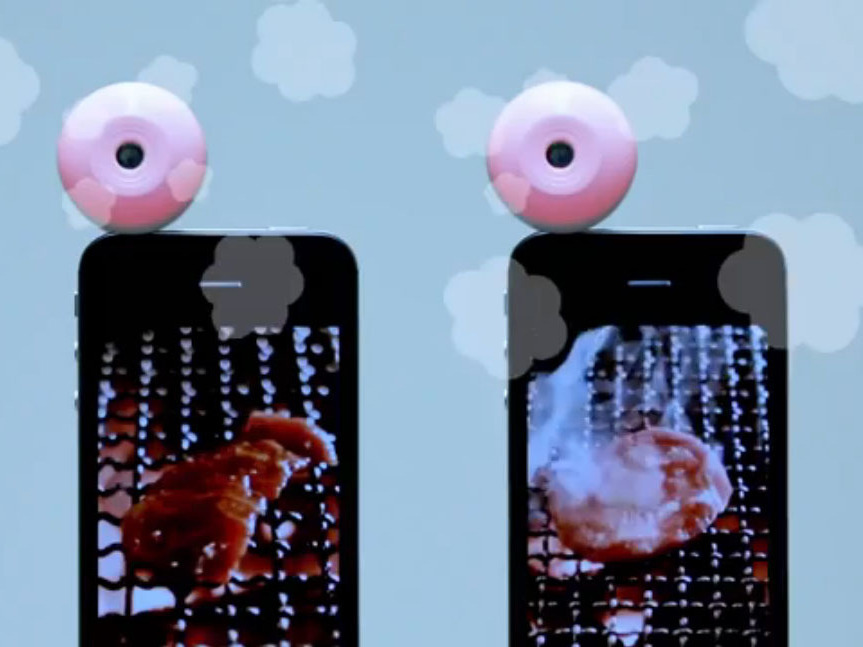 Simply plug the Scentee device into your iPhone jack and let the scent of grilled meat waft your way.

Have you ever wished that your iPhone could bring you the smell of coffee, curry or steak?

No? Well, there's a gadget for that.

Japanese company Scentee has invented a spherical iPhone attachment that can squirt out aromas ranging from flowery to savory. Each scent comes in a separate cartridge, which you can change out by opening up the device. And to power it up, all you have to do is plug it into you phone's headphone jack.

In the words of Scentee's CEO Koki Tsubouchi: "The iPod made music portable. We want to do that for scent."

If you're in the mood for food smells, Scentee has an app called Hana Yakiniku, which roughly translates to "nose grilled meat," programmed with three scents: short ribs, grilled beef and buttered potatoes.

The video shows a slender woman sniffing grilled beef as she chows down on plain lettuce, and a cash-strapped student happily deluded (through smell) into believing his white rice is topped with short ribs.

This marketing of imaginary meat is a bit strange, frankly. Clearly anyone who can afford this app, and an iPhone for that matter, is sufficiently nourished. And perhaps someone seriously in need of protein would not find it so amusing.

Tsubouchi insists the app is supposed to be fun, even silly. Look no further than the giant dismembered nose and promo copy describing the product as "revolutionary new deliciousness that mankind finally managed to develop after 7 million years of continuous evolution."

Still, we were curious — could the smell of meat actually satisfy cravings for it? Smell, of course, is very closely connected to taste. According to Marcia Pelchat, sensory psychologist at the Monell Chemical Senses Center, our tongues are able to distinguish between sweet, savory, bitter and tart. But "smell provides a lot of the variety in flavor," she tells us.

It's no surprise, then, that food manufactures have long been interested in using smell to manipulate our sense of taste. But to truly trick your mind into thinking you're eating beef, you would have to chomp on something that at least feels like meat. "I think you need the texture and the whole context," says Pelchat. Lettuce won't work, but fake meat might — which means this could be a good app for vegetarians with withdrawal cravings.

You'll be able to test it out for yourself in late November, when Scentee makes its U.S. debut. The Japanese will be able to purchase it a bit earlier — by mid-November. The device will retail at about $35, with the scent cartridges for $5 each.

Tsubouchi says his company is in talks with American food manufacturers, who are interested in developing advertisements that entice your nose as well as your eyes.

The company is also releasing a series of apps that link the scents to your phone's alarm clock, text messages and social media alerts. So you'll be able to wake up every morning and literally smell the roses (or the short ribs).