Accessibility links
Heat, Drought Draw Farmers Back To Sorghum, The 'Camel Of Crops' : The Salt Consumers in search of novelty are turning to once-obscure grains like quinoa, spelt and sorghum. But sorghum's great virtue for farmers is the fact that it can thrive with so little water. 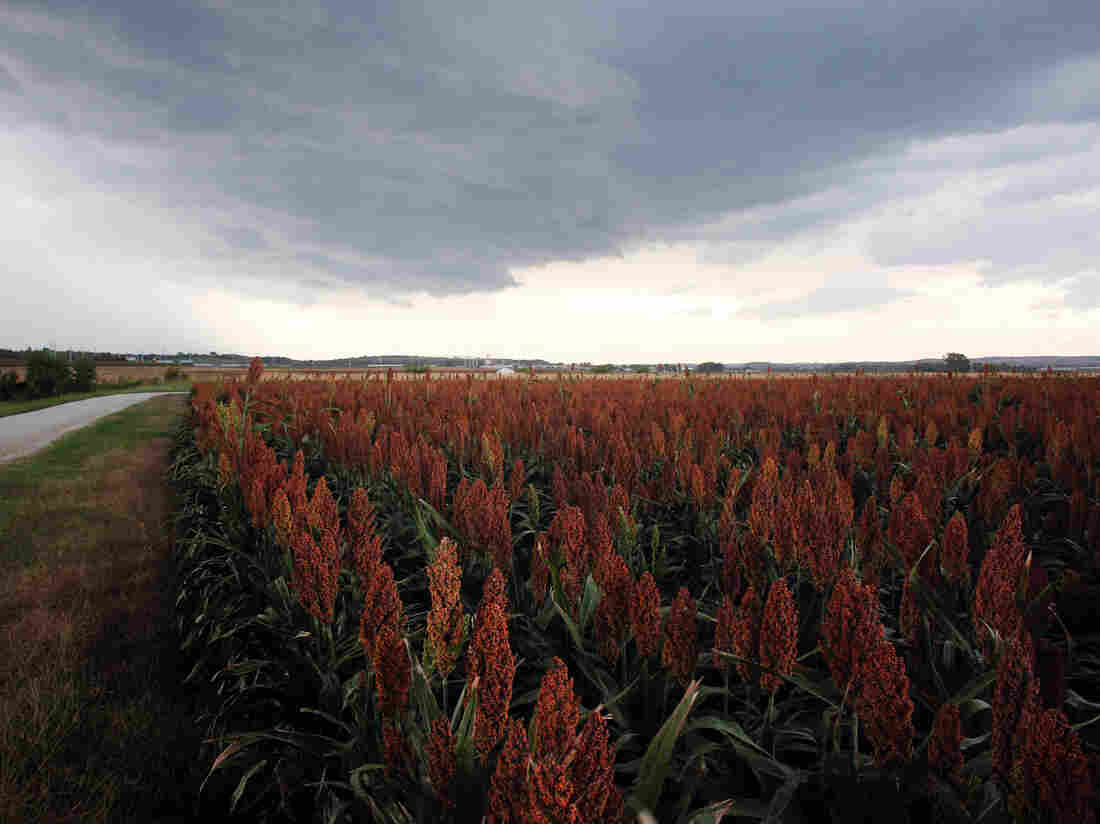 Much of the world is turning hotter and dryer these days, and it's opening new doors for a water-saving cereal that's been called "the camel of crops": sorghum. In an odd twist, this old-fashioned crop even seems to be catching on among consumers who are looking for "ancient grains" that have been relatively untouched by modern agriculture.

Sorghum isn't nearly as famous as the big three of global agriculture: corn, rice and wheat. But maybe it should be. It's a plant for tough times, and tough places.

Sorghum "originated in the northeastern quadrant of Africa," explains Gebisa Ejeta, a plant scientist from Ethiopia and professor at Purdue University. From there, it spread across Africa, India and even into China. "It's got a lot of characteristics that make it a favorite crop for the drylands of Africa and the semi-arid tropics."

It's an essential source of food in those regions, but it's not typically a big money crop. In Africa, it's grown by subsistence farmers. It's never gotten much attention from seed companies or investors.

But it is nutritious. It can grow in soils that other plants won't tolerate. Above all, it doesn't need much water. Compared with corn, for instance, it needs one-third less water, and it doesn't give up and wilt when rains don't come on time. It waits for moisture to arrive.

It probably arrived in North America aboard slave ships. That traditional sorghum looks like an overgrown corn plant, up to 10 feet tall, with a head of seeds on top.

Today, American farmers grow two kinds of sorghum. Sweet sorghum is tall; you can use it to make a sweet syrup or just feed the whole plant to animals.

But most sorghum in the U.S. is grown for feed grain. That version of the plant is short, with seeds that come in several different colors.

Steve Henry showed me some near Abilene, Kan., on our way to the farm where he grew up. Kansas is the biggest sorghum-growing state. Out here, they call milo.

Sorghum is used for the same things as corn: high-energy feed for pigs and chickens. It also gets turned into ethanol.

But corn is far more popular. Corn produces a bigger harvest, and farmers earn bigger profits with it — at least when there's plenty of water. In the U.S., the amount of land in sorghum has been steadily shrinking.

There are signs, though, of a sorghum revival on the high plains. The reason is water, or the lack of it. From Nebraska to western Texas, cornfields have been fed with rivers of water pumped from underground aquifers, and that water is starting to run low.

Some farmers, such as Mitchell Baalman of Hoxie, Kan., are looking for crops that aren't quite so thirsty. "We're learning a lot about milo," says Baalman. "You know, nobody wants to grow milo out here; it's kind of a forgotten crop. But I tell you what, there's where our money's going to be made this year. It'll be on grain sorghum."

Ejeta, who won the World Food Prize in 2009 for his work on sorghum, says that sorghum's renaissance may depend on the price that farmers pay for water. "If water is given its real value, and you limit irrigation, or people begin to pay for water, it would be economically smarter to grow sorghum in several areas of the United States," he says.

In the latest twist to the sorghum saga, it's actually becoming somewhat trendy among consumers who are looking for something a little different, and maybe a little more healthful.

"Sorghum is naturally gluten-free; it's an ancient grain," says Earl Roemer, who set up a company called Nu Life Market to sell sorghum flour to big food companies. Roemer's sorghum mill in Scott City, Kan., is busy. "Demand is exploding!" he says. "We're seeing 25 to 30 percent increase in demand, annually. We're doing all we can to increase production." His flour goes into gluten-free baked goods and is also used in breakfast cereals containing so-called ancient grains like quinoa, amaranth and spelt.

Every week, he says, visitors from food companies large and small make the trek to western Kansas to talk about new opportunities. Next week, he says, he's traveling to Taiwan to explore international markets.