Accessibility links
To Stave Off Decline, Churches Attract New Members With Beer : The Salt As a way to bring new people to the chuch, a few mainline churches are experimenting with informal services centered around craft beer. The result is not sloshed congregants; rather, it's an attempt to do church differently. 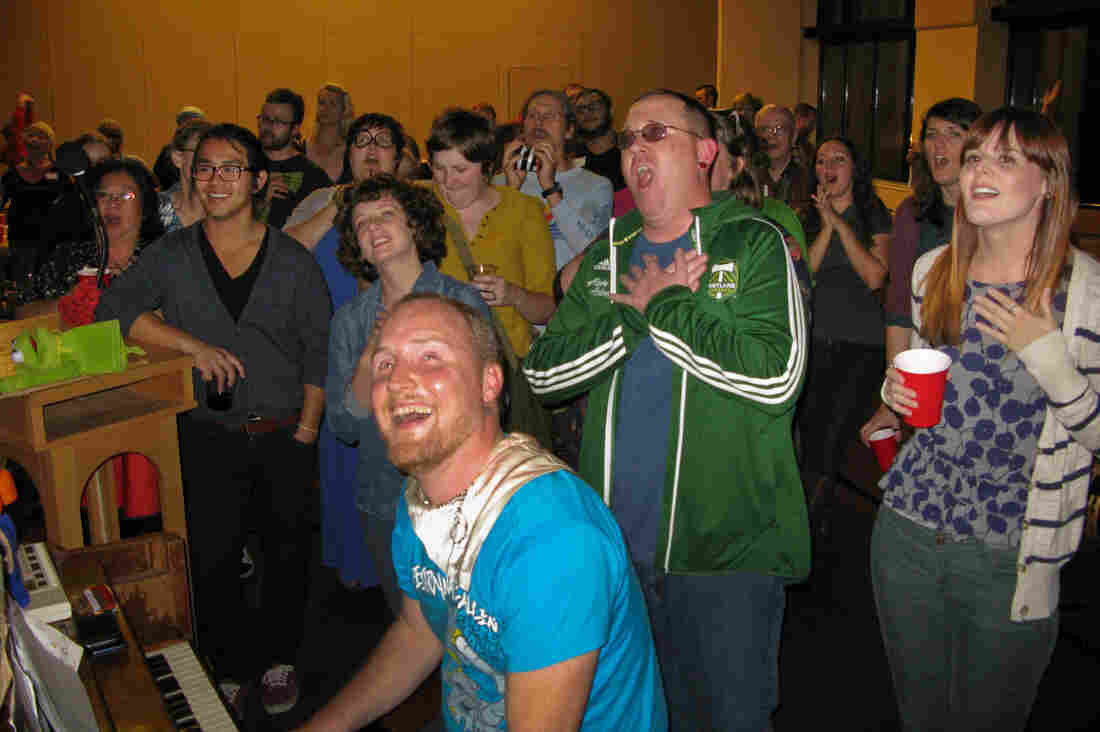 With mainline religious congregations dwindling across America, a scattering of churches is trying to attract new members by creating a different sort of Christian community. They are gathering around craft beer.

Some church groups are brewing it themselves, while others are bring the Holy Mysteries to a taproom. The result is not sloshed congregants; rather, it's an exploratory approach to do church differently.

Leah Stanfield stands at a microphone across the room from the beer taps and reads this evening's gospel message.

She's a 28-year-old leasing agent who's been coming to Church-in-a-Pub here in Fort Worth, Tex., for a year, and occasionally leads worship.

"I find the love, I find the support, I find the non-judgmental eyes when I come here," she says. "And I find friends that love God, love craft beer."

5 Things You Might Not Have Known About God And Beer

Every Sunday evening, 30 to 40 people gather at Zio Carlo brewpub to order pizza and pints of beer, to have fellowship, and have church — including communion. 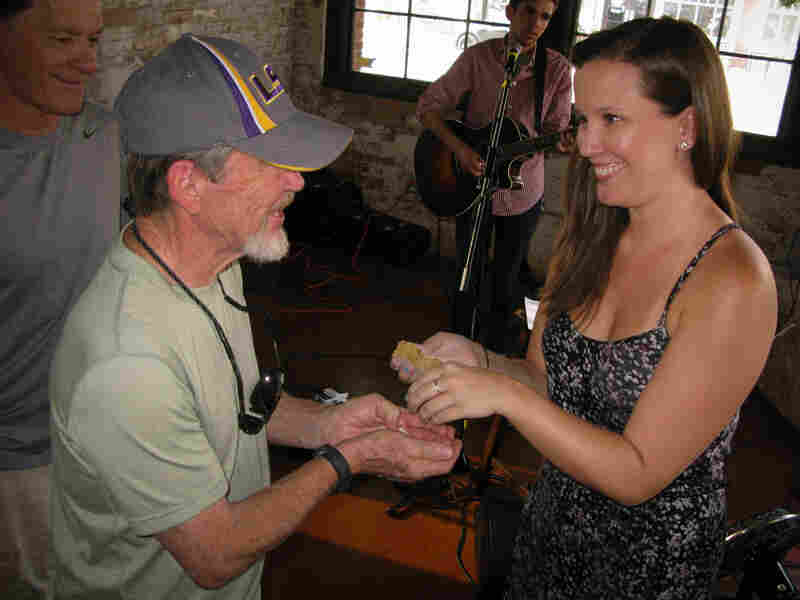 Leah Stanfield, a leasing agent in Fort Worth and regular attendee of Church-in-a Pub, hands out bread during communion at the tavern. John Burnett/NPR hide caption 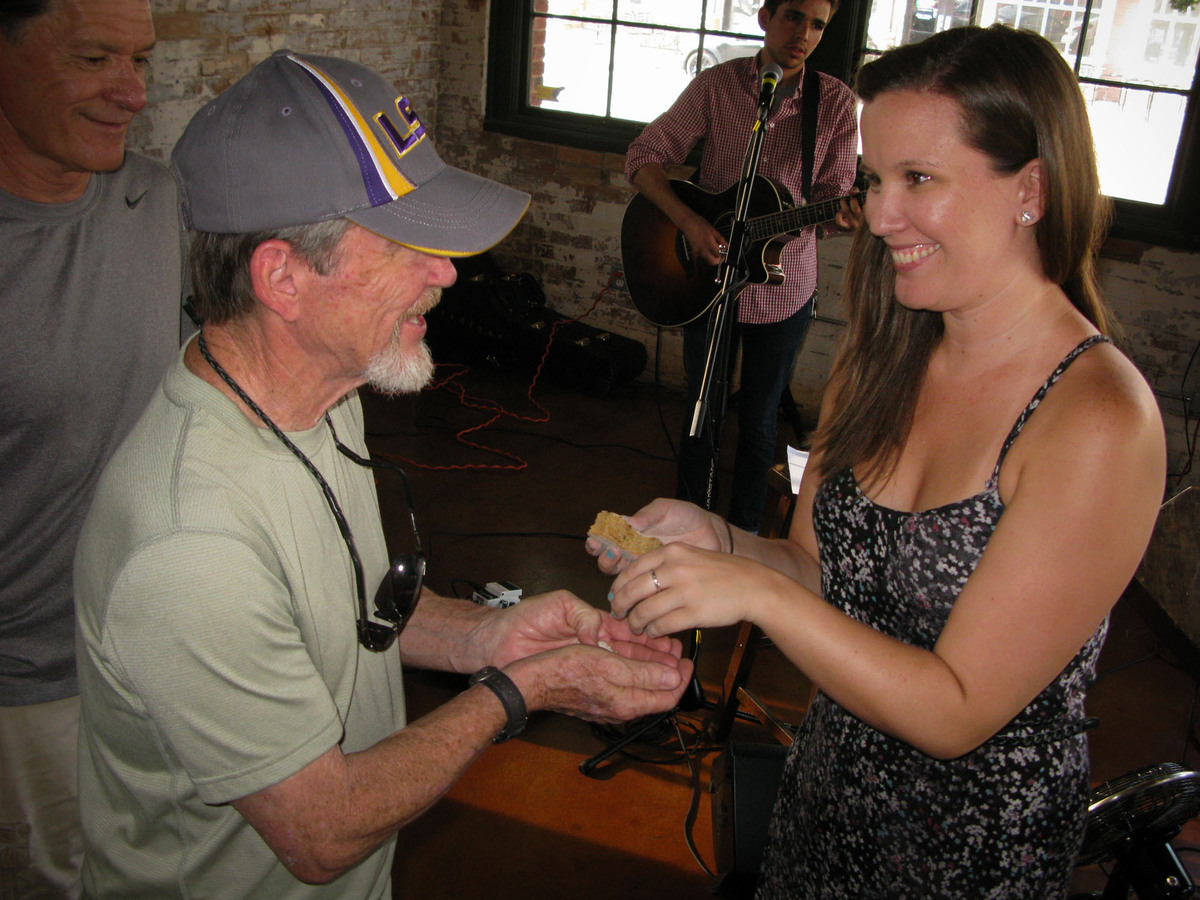 Leah Stanfield, a leasing agent in Fort Worth and regular attendee of Church-in-a Pub, hands out bread during communion at the tavern.

Some patrons are understandably confused. They come in for a brew and there's a religious service going on in their bar. They expected Trivia Night and they get the Holy Eucharist.

"I tell 'em, it's a church service," says bartender Les Bennett, "And they're, like, 'In a pub?' And I'm, like, yeah. Some of 'em stick around for trivia, some of 'em take off, some of 'em will hang out and have another pint or two."

That's one of the objectives: A guy sits at the bar nursing a beer, he overhears the Gospel of Luke, he sees people line up to take bread and wine, he gets curious. Phil Heinze says pub church has now become an official — if edgy — Lutheran mission.

"I'm not interested, frankly, in making more church members," Heinze. "I'm interested in having people have significant relationships around Jesus. And if it turns out to be craft beer, fine."

For most of the folks who attend regularly, this is their Sunday night congregation. Church leaders, initially skeptical, are now paying attention. Last month, the regional council of the Evangelical Lutheran Church in America named Church-in-a-pub a Synodically Authorized Worshipping Community. Next year, it will call a young pastor to expand the idea to other taverns around Dallas-Fort Worth.

"I think the institutional church now is getting onboard," says Heinze, "because there's a lot of anxiety frankly about the church's decline and they're trying to think outside of that institutional box."

In downtown Portland, Ore., at the stately old First Christian Church, one Saturday night a month they open the parish hall for an event called Beer & Hymns. 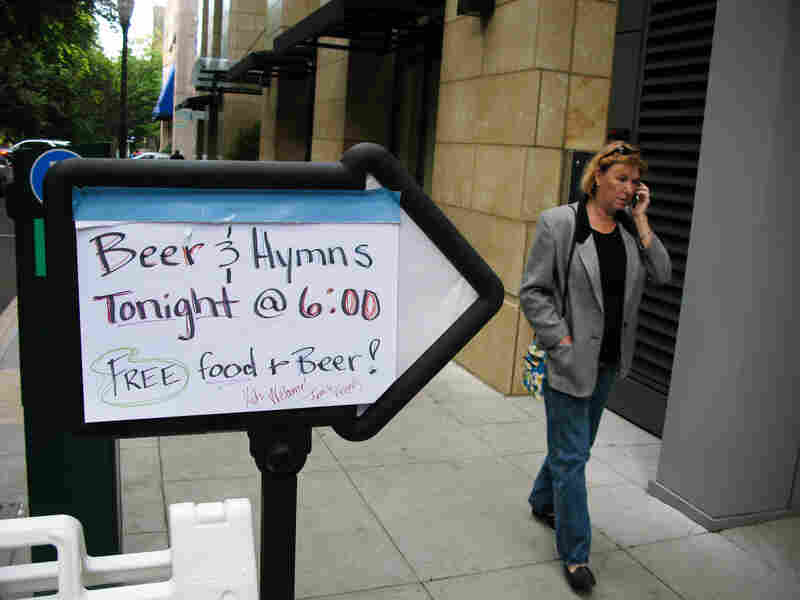 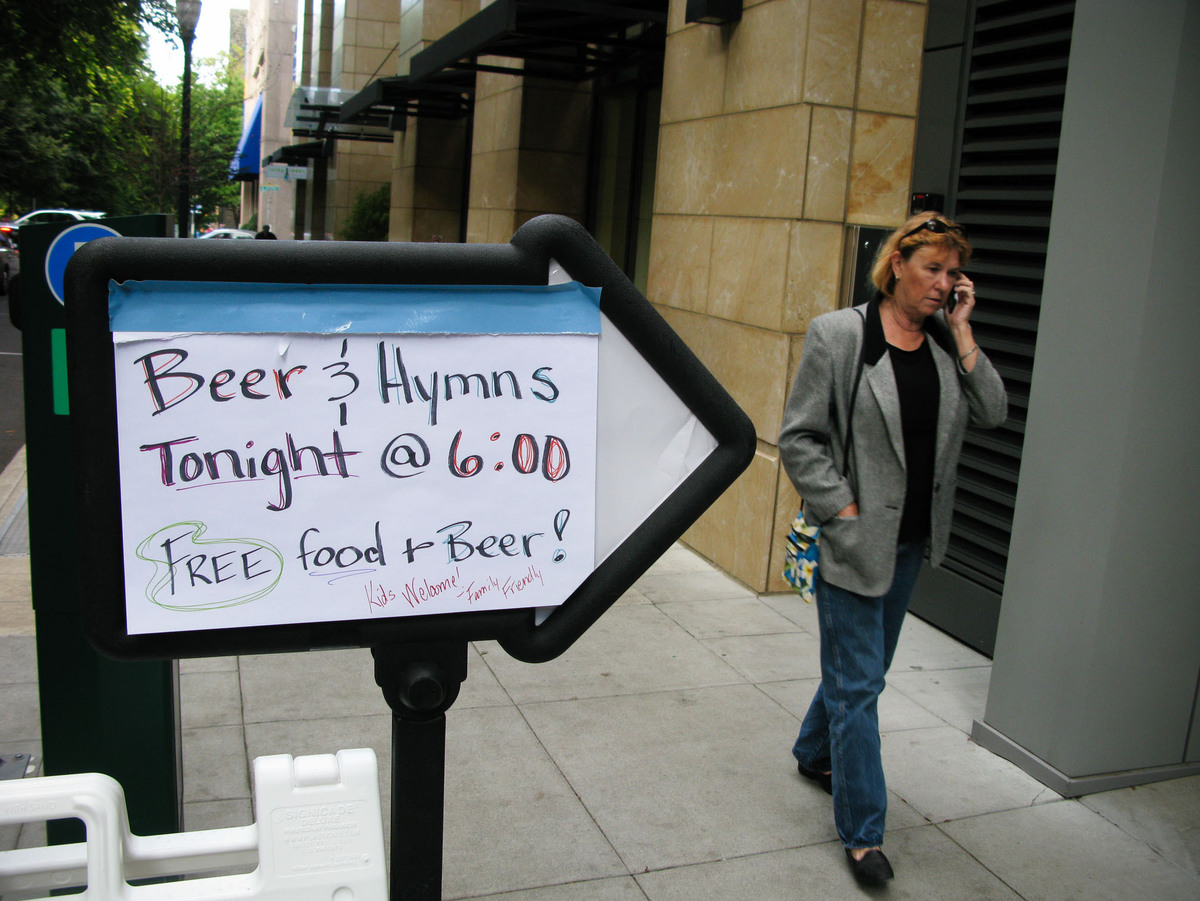 The sign for Beer & Hymns at First Christian Church in downtown Portland, Ore.

There must be 100 people here tonight, most of them young, the kind you rarely see in church on Sunday morning. They're swigging homemade stout from plastic cups — with a two-beer limit. They're singing traditional hymns from a projection screen like Be Thou My Vision. And they're having way too much fun.

Like the crowd at Church-in-a-pub, a lot of folks at Beer & Hymns appear to be refugees from traditional churches.

Between hymns, people can stand up and say anything they want. Jolie Shempert, a transgender person who's studying humanities at Portland State University, steps up to the mike.

Shempert was raised in a strict church that taught that animals don't have souls, only people do. But Shempert's beloved dog, Gunner, has just died.

"I want to sing this song in defiance of that because Gunner was my friend. And he has emotions and a personality and I had a relationship with him that's as real as any relationship I had with any human being."

The Christian Church Disciples of Christ — a small mainline Protestant denomination — has experienced a steep drop in membership in recent decades. Beer & Hymns is one attempt to attract new people, in this hip, beer-loving city, while keeping a safe distance away from stained-glass windows.

Rodney Page is optimistic. The 78-year-old is a long-time member of First Christian Portland and a Beer & Hymns convert.

"I know that initially there were some people who had some trepidation," says Page. "This church has had a history and background of being anti-alcohol, so it took some convincing for some people. But eventually people went ahead with it and it's been a great success."

No one is suggesting that Beer & Hymns or Church-in-a-Pub — or any of the dozens of other beer-in-church events that are popping up around the nation — are permanent. They're transitional experiments.

Amy Piatt is senior pastor at First Christian Church Portland. She's a sixth-generation Disciple of Christ and the originator of Beer & Hymns. She says in this postmodern age, what it means to attend church is changing.

"It's probably, in the very near future, not going to be at 10 am on Sunday morning wearing your best shoes and tie or dress," she says. "It's going to be something different. I mean, what that is, we are still finding out, we're still learning together. But it's still holy, God is still there, and that's what's most important."

To doubters, the Beer & God crowd has this pop quiz. What was the first miracle Jesus performed? Turning water into wine.