Accessibility links
Why Are Pig Farmers Still Using Growth-Promoting Drugs? : The Salt There's a curious twist in the contentious debate over feeding antibiotics to animals in order to make them grow faster. Evidence suggests using antibiotics for growth promotion, at least among pigs, doesn't even make economic sense. But some pork producers don't believe it. 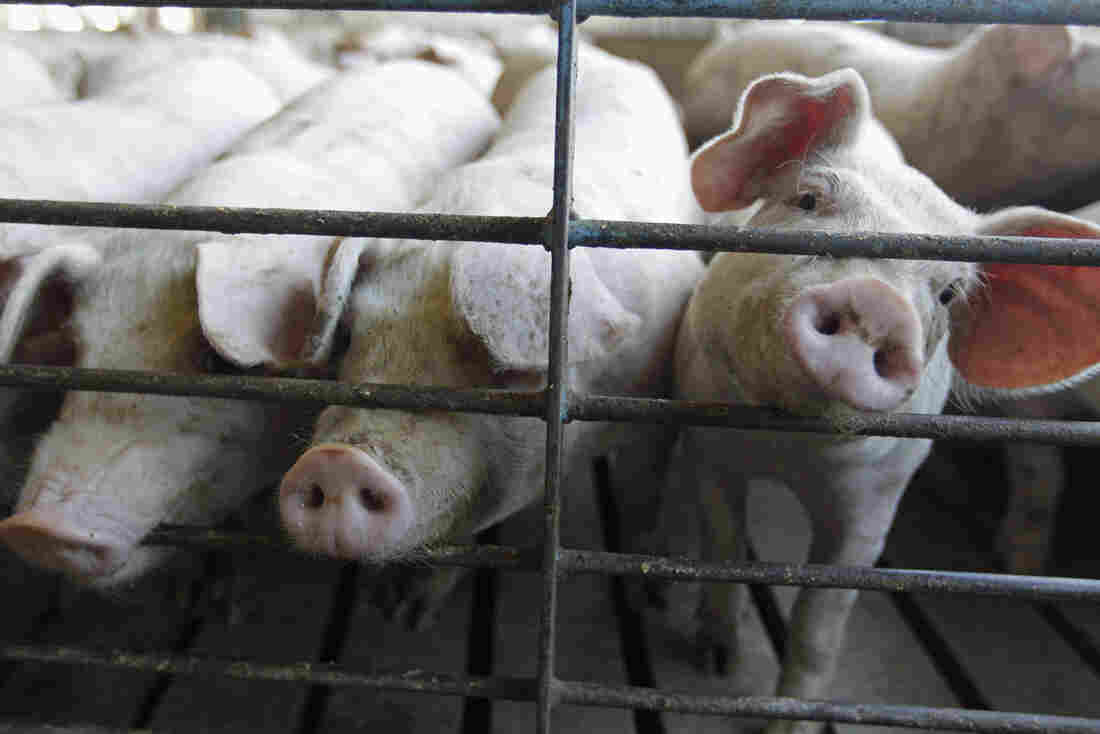 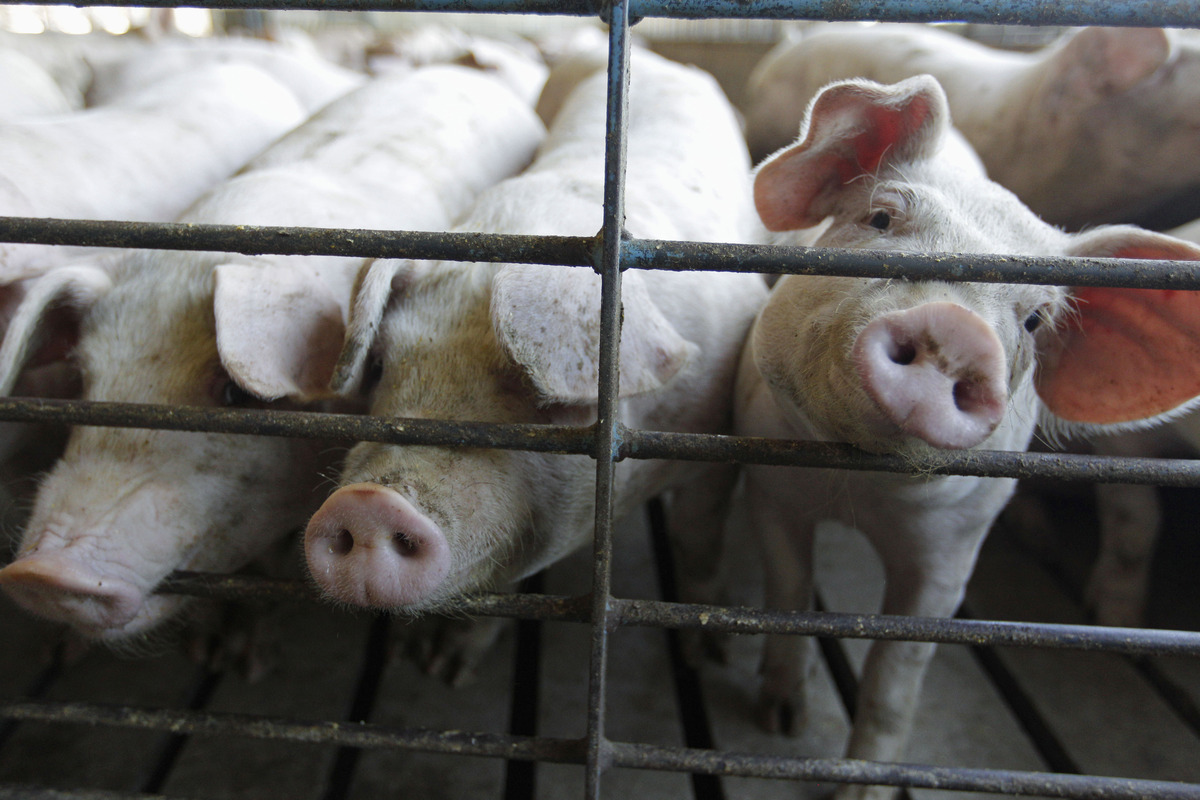 In recent years, pork producers have found ways to keep the animals healthy through improved hygiene.

It's one of the most controversial practices in agriculture: feeding small amounts of antibiotics to animals in order to make them grow faster.

But what if the drugs don't even work very well?

There's some good evidence that they don't, at least in pigs. They used to deliver a boost in growth, but that effect has disappeared in recent years or declined greatly.

The reason for this is interesting and even paradoxical.

Researchers think the antibiotics used to work by suppressing low-grade infections. In recent years, however, pork producers found other ways to accomplish the same thing through improved hygiene. This has occurred even while swine operations grow. As a result, the drugs have become largely superfluous — yet many farmers still use them.

Are Farm Veterinarians Pushing Too Many Antibiotics?

To understand how this happened, you have to step back in time, says Steve Dritz, a specialist in swine nutrition at Kansas State University.

Sixty years ago, when antibiotics were new, "people started treating animals, and feeding [the antibiotics], and finding that they had increased growth rates and feed efficiencies," he says. Nursery-age pigs, for instance, grew 12 to 15 percent faster with antibiotics. The animals also needed less feed to reach full weight. Other studies showed similar results in chickens and cattle.

In the 1980s, a new set of studies found similar effects. So the growth-promoting effects of antibiotics became standard practice among meat producers.

Fast forward to the 1990s. Dritz was starting his career as a scientist at Kansas State University, and pork production was changing dramatically. "We instituted this thing called multisite production," says Dritz.

Previously, pigs were born and raised in one barn or in several barns close together. This meant infections could easily pass from one generation to the next, the way that kids share germs between their friends on the playground and their parents at home.

Under the new system, when piglets are weaned, they move to a whole different place. That new site is carefully scrubbed and free of disease.

Craig Rowles, who runs a large swine operation in Carroll, Iowa, shows me one such room. There's not a piglet in sight. "This room just got completely washed and disinfected, and now it's going to sit here and dry for a while," he says. 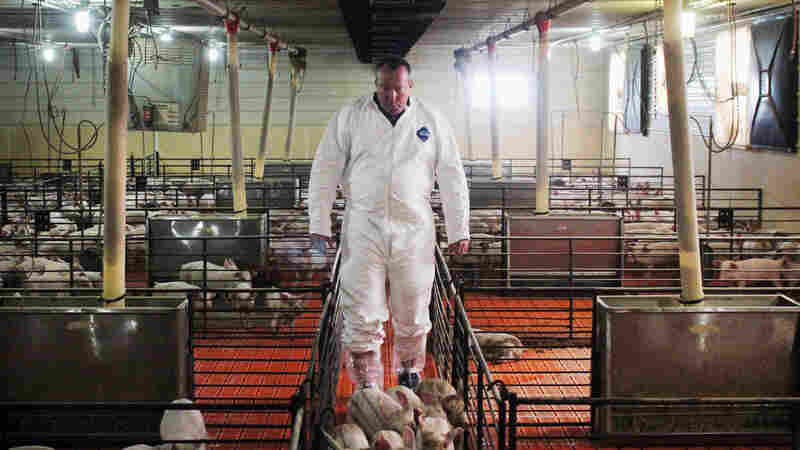 Craig Rowles raises pigs near Carroll, Iowa. The piglets will enter and leave this room as a group. Dan Charles/NPR hide caption 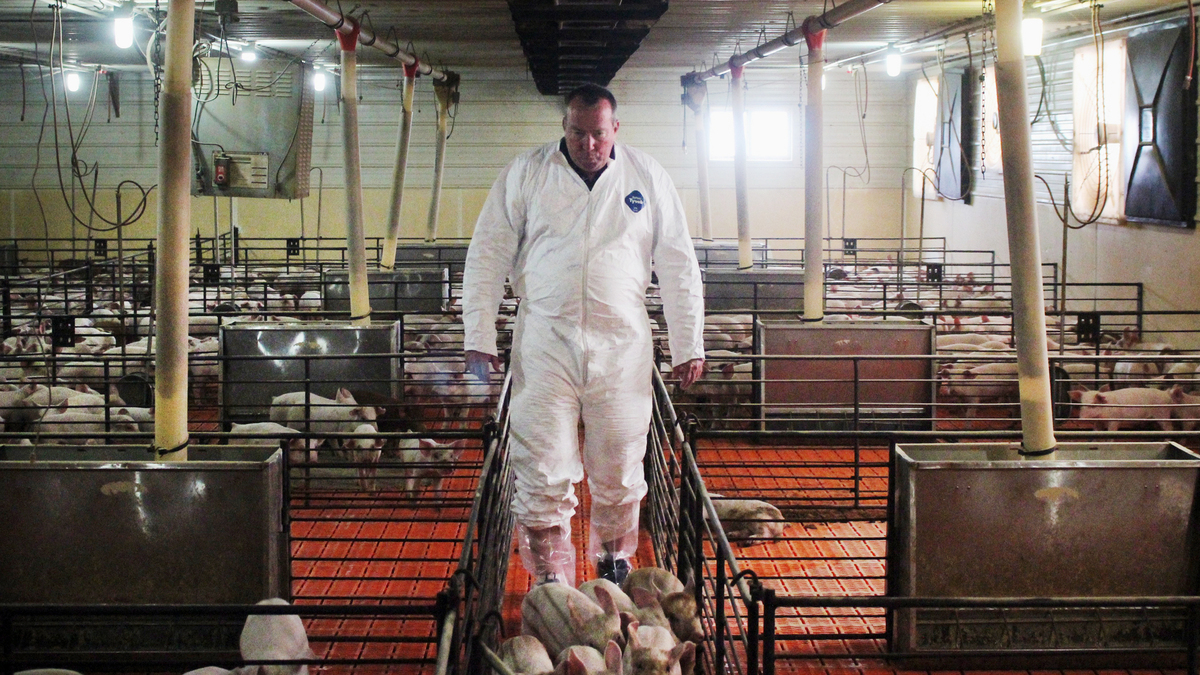 Craig Rowles raises pigs near Carroll, Iowa. The piglets will enter and leave this room as a group.

The groups are kept strictly separated from each other. If workers move between the groups, they first have to change their boots.

When farmers adopted multisite production, it cut down on disease — and pigs actually grew faster.

So Dritz wondered whether improved hygiene was delivering exactly the same growth-promoting effect that farmers used to get through antibiotics. If so, did they still need to use the drugs?

Dritz carried out some studies on pigs in these multisite systems, comparing animals that received antibiotics with others that didn't. "Lo and behold, in these studies, there wasn't nearly the magnitude of the growth response," he says.

In the "finishing" stage, the effect of antibiotics disappeared. Younger pigs grew a bit faster with antibiotics, but the effect was smaller than had been observed earlier.

Dritz started telling pork producers that most uses of antibiotics for growth promotion or feed efficiency really did not make sense anymore. Many farmers took his advice. But he was surprised and a little discouraged to see how many did not. They weren't convinced by the evidence.

"It's very hard to change people's perceptions," he says. Even among veterinarians, his professional colleagues, there was reluctance to change. Many continue to recommend using the drugs.

Dritz thinks that this is partly rooted in psychology and the professional culture of veterinary practice. Veterinarians "are action-oriented people, most of them. They want to do something. Not doing something just doesn't seem right, as a professional, you know?"

Once upon a time, this would have been left for farmers and their vets to hash out, but the use of antibiotics on the farm now is the focus of intense controversy. Critics of the meat industry say using these drugs to promote growth is irresponsible because it increases the chances that bacteria will develop resistance to antibiotics, and some of these bacteria can infect humans.

The Food and Drug Administration now says that medically important antibiotics should not be used for this purpose. It is trying to persuade drug companies to stop selling drugs for growth promotion. Within a few years, such uses of antibiotics may no longer be legal.

Among farmers, there's some grumbling about this. But at least for pork producers, dropping the drugs may actually save money.