Accessibility links
How To Levitate A Sandwich: 'Modernist Cuisine' Spills Photo Secrets : The Salt A ham and cheese sandwich floats in midair. A Weber grill is sliced in half, exposing a burger sizzling inside. The Photography of Modernist Cuisine is both visual feast and a practical guide.

But one thing is for certain: The jumbo-sized images in The Photography of Modernist Cuisine are truly awesome.

In one, a ham and cheese sandwich levitates in midair. Then, a Weber grill gets sliced in half lengthwise to expose a pink burger cooking on another page. And blueberries and peas balloon to the size of dinner plates and melons.

The latest creation from ex-Microsoft executive Nathan Myhrvold and his team, called The Cooking Lab, is the ultimate coffee table book. It has a wingspan of more than 2 feet, weighs 12 pounds and costs $120. 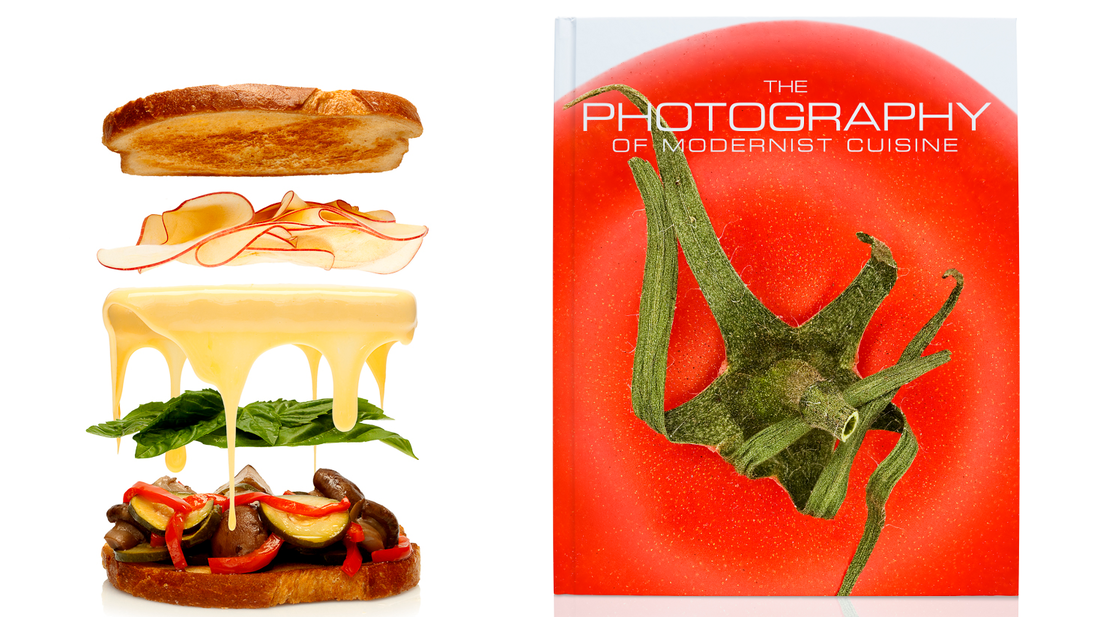 Want to levitate a grilled ham and cheese in your next Instagram snapshot? The team at The Cooking Lab divulges their photo tricks in their new book. Courtesy of The Cooking Lab hide caption 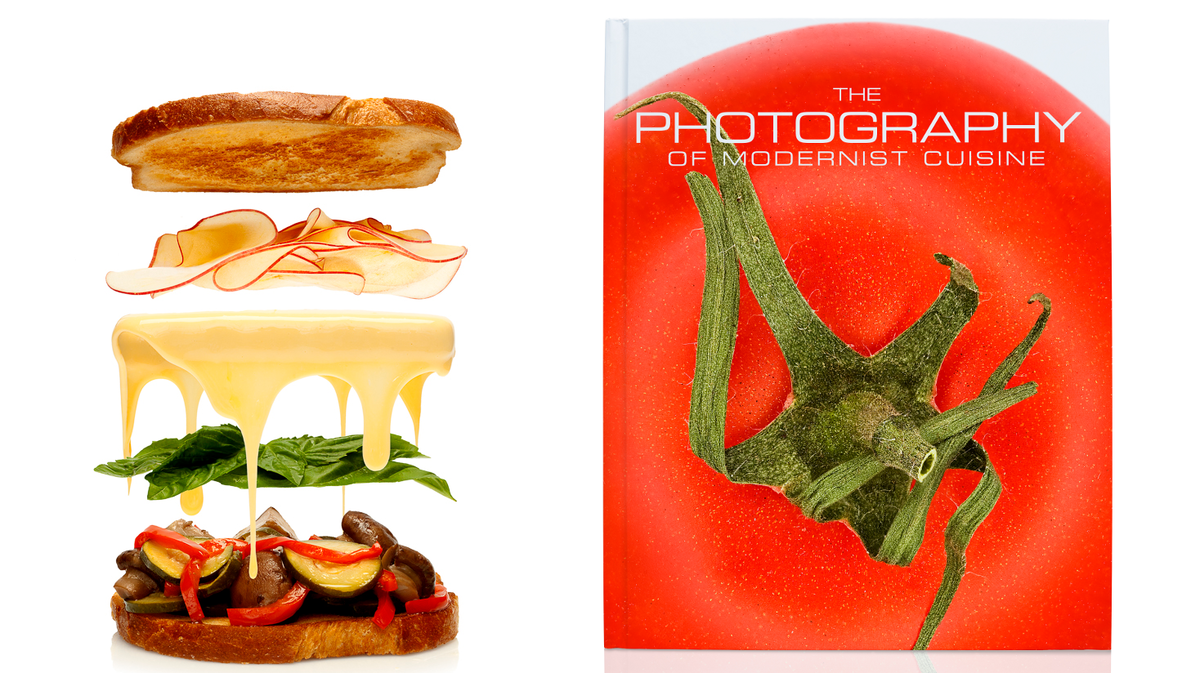 Want to levitate a grilled ham and cheese in your next Instagram snapshot? The team at The Cooking Lab divulges their photo tricks in their new book.

Courtesy of The Cooking Lab

"There are 600 to 700 big coffee table books on dogs and about 1,500 with naked women," Myhrvold tells The Salt. "But there weren't any with big pictures of food — and no recipes."

And while the images themselves are jaw-dropping, perhaps the best part of the book is that the team shares all the secrets about how the photos are made. Myhrvold's loyal following of mad scientist DIYers are sure to appreciate that.

Myhrvold and his motley crew of chefs, chemists and editors helped build that following when they published a widely celebrated cookbook called Modernist Cuisine: The Art and Science of Cooking a few years ago.

The cookbook offered an inside look at how the world's most avant garde chefs are using technologies and techniques from the lab to change how people eat and enjoy food. Think French fries made extra crispy by blasting them with sound waves or caramelized carrot soup made with a centrifuge to separate out the juice.

The new book features photos from the cookbook — and 278 new ones — in a larger-than-life format. At the back are details about how each photograph was made, from lighting and lenses to editing and stitching images together.

For instance, to get leeks and watermelons to "glow," the team placed thin slices of the produce on clear Plexiglass and then lit them from below. They photographed rice and beans under a microscope to capture the super close-up macros. And to catch a kernel of corn popping, the team filmed more than 5 pounds of popcorn, Myhrovold says. (Who knew that popcorn could rival the grace of a Tchaikovsky ballet?)

But it's the "cutaway" photos that really steal the show. From tomatoes pureeing in a blender to a pork shoulder adsorbing heat in a pressure cooker, Myrhvold and his team offer a glimpse of radical transformations during 14 cooking techniques.

So how did they make the cutaways? Two words: band saw. 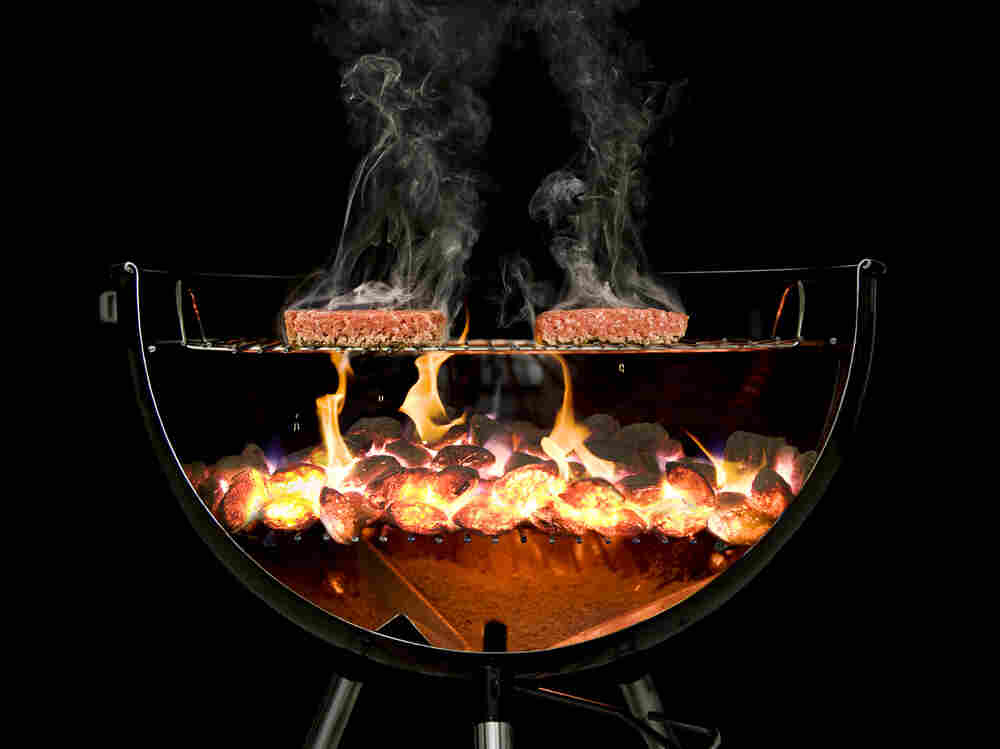 To capture the magic of grilling, the team at The Cooking Lab sawed a Weber grill in half and then combined 30 photographs together. Ryan Matthew Smith/Courtesy of The Cooking Lab hide caption 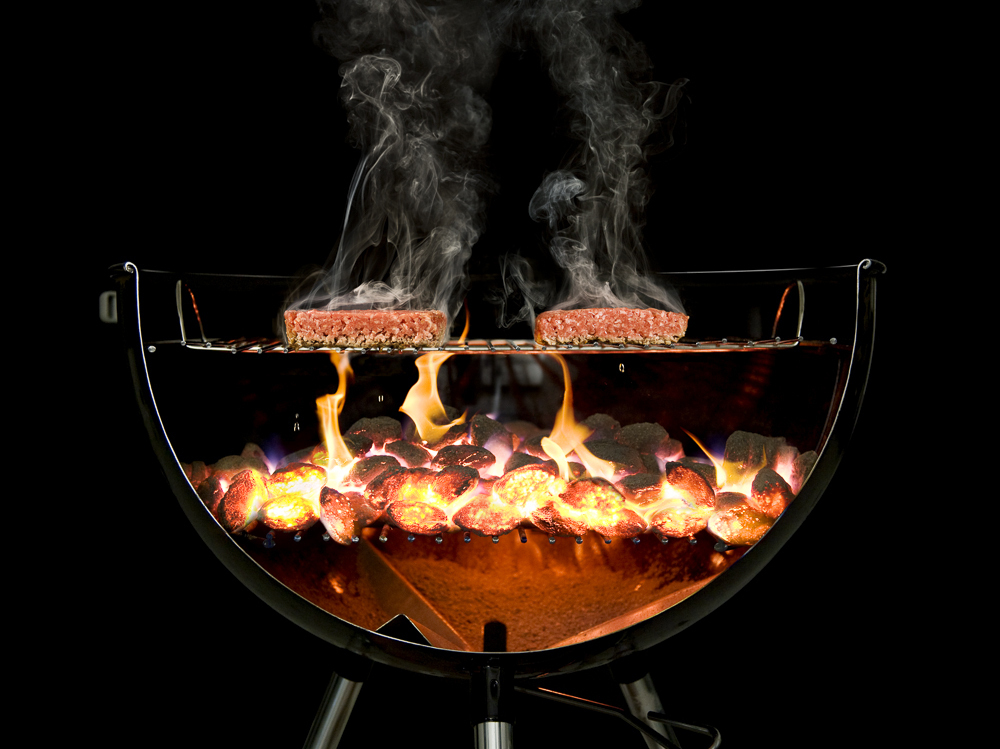 To capture the magic of grilling, the team at The Cooking Lab sawed a Weber grill in half and then combined 30 photographs together.

That's right, the Cooking Lab has its own machine shop, and a guy with spiky, red hair literally slices microwave ovens, pots and blenders in half. Then the teams uses toothpicks or sewing needles to hold the cut food into place. A piece of Plexiglass keeps boiling liquids inside the pans.

"We made a hell of mess especially when food was flying through the air," Myrhvold says. The team even started a fire while trying to catch a stir-fry in action. "But the food only had to look good for 1/1000th of the second."

And sometimes they didn't put the food in the air at all but just faked it. For instance, that tossed salad isn't tossed all. Instead pieces of lettuces and dressing are pinned to a black velvet.

All the photos are heavily edited. And many of the images are actually several — even dozens — of photos combined together in Photoshop. For instance, Myrhvold and the team cropped and combined 30 separate photos to capture the burger cooking on the sliced-in-half grill.

That time and effort are worth it, Myhrvold says, because the photographs lure readers into thinking about how cooking works.

A previous version of this post incorrectly used the term Modern in describing the book The Photography of Modernist Cuisine.