Accessibility links
It's National Indian Pudding Day! Here's Why You Should Celebrate : The Salt Indian pudding, the traditional New England dessert, is rich in both history and flavor. It's made by combining cornmeal and milk with molasses. Food historians say it's one of the first truly American recipes. 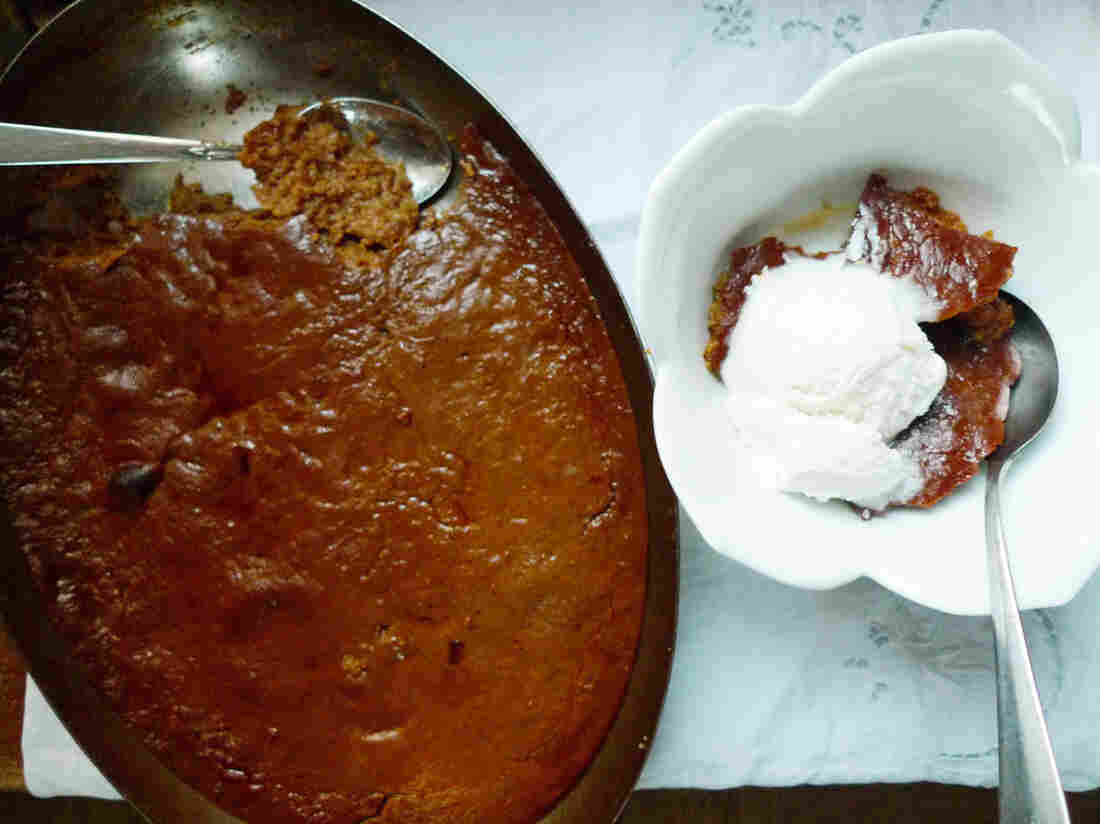 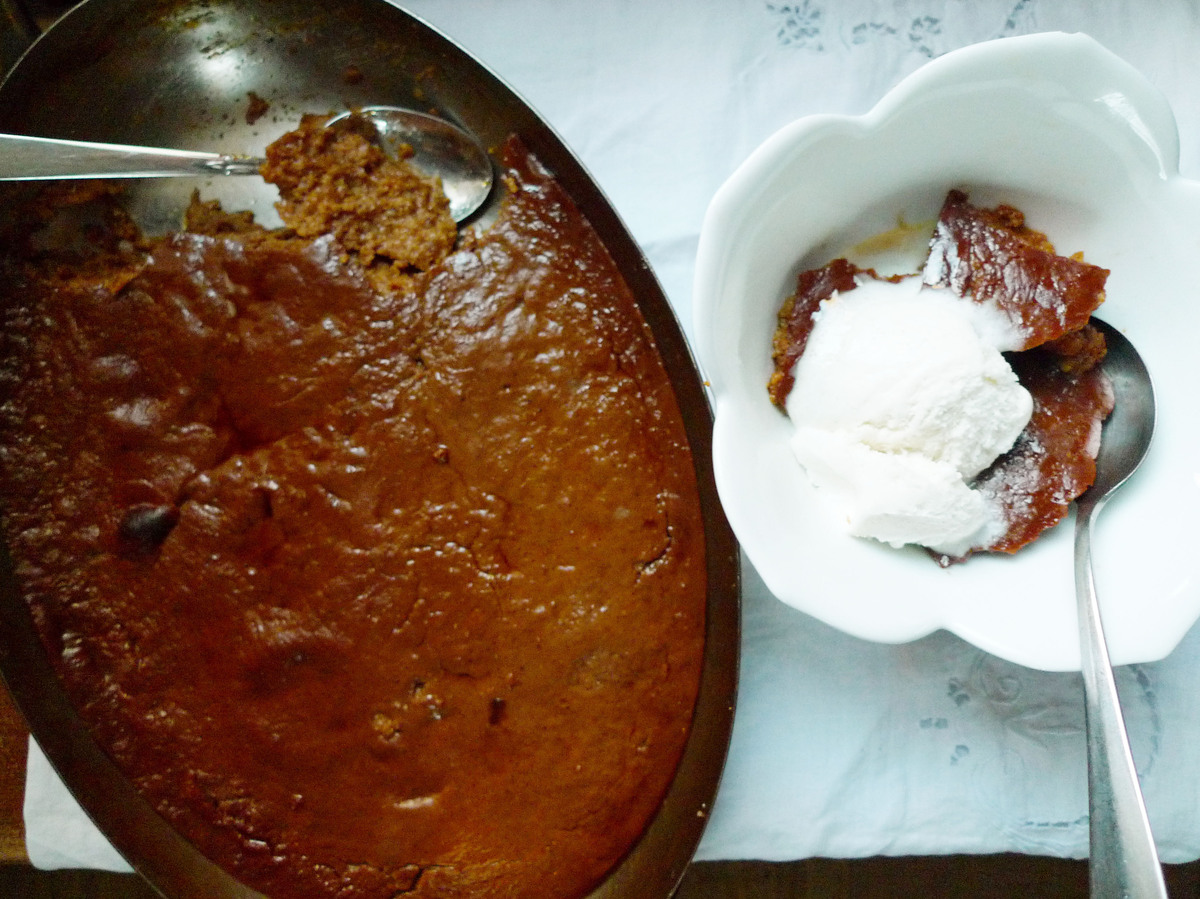 Turns out, Nov. 13 is National Indian Pudding Day. It sneaked up on you again, didn't it?

You can't be blamed.

Indian pudding is virtually unknown outside of New England, and even there it's tricky to find. But this enduring New England dessert may actually deserve a day of its own.

The origins of this food holiday are obscure — "I don't know who the National Indian Pudding Day lobby is," says food historian Kathleen Wall, who works at Plimoth Plantation, the Colonial living-history museum in Plymouth, Mass. The holiday, she notes, has "never been petitioned at the White House."

But the dish itself, says Wall, is unquestionably all-American. The "Indian" in Indian pudding, Wall explains, refers to Native American cornmeal. The original pudding was likely just cornmeal, milk and molasses, steamed or boiled for a very long time. She calls it one of the country's first truly American recipes. 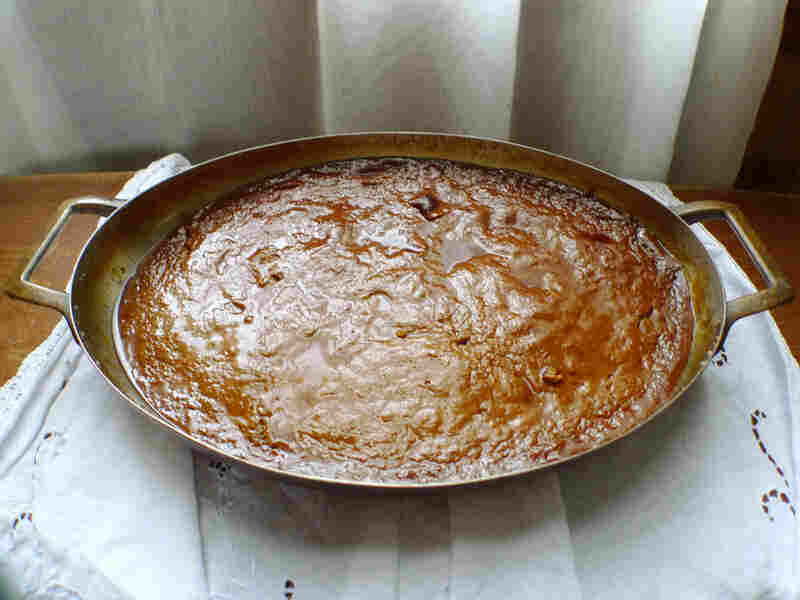 It's not the prettiest dessert, but it is delicious. Katherine Perry/NPR hide caption 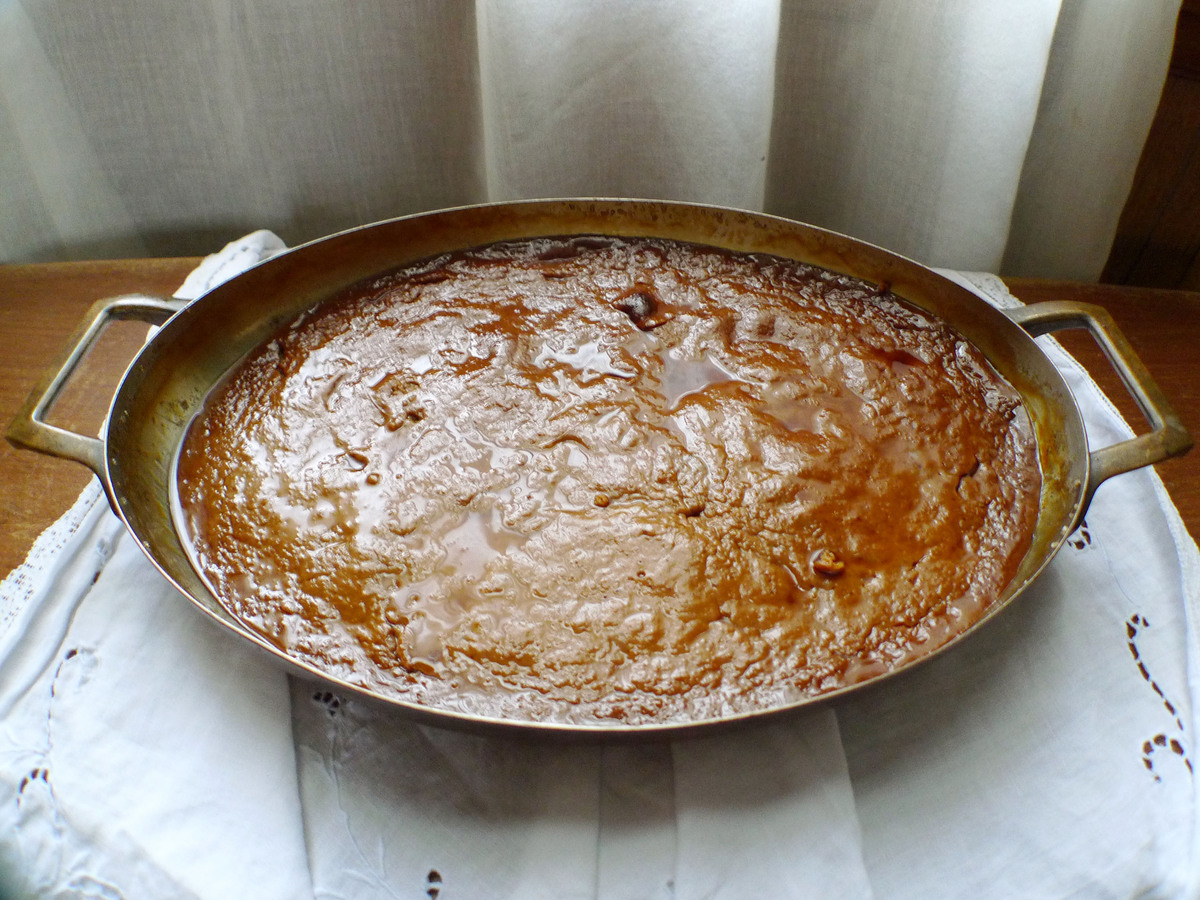 It's not the prettiest dessert, but it is delicious.

"You have Indian corn, which you have to come over here to have — it's not in England at at all. The milk from the cows that are brought over here by the European settlers. There's the molasses that comes with the trade with the Caribbean," Wall says. "And so it is, to my mind, a New England dish. It is not an English dish, or a Colonial dish; it belongs to all of New England."

Like much of traditional New England cooking, Indian pudding was quite plain, Wall says. It fell out of favor, though it never disappeared entirely. Some places, like the historic Wayside Inn in Sudbury Mass., find that though the dish can be a hard sell to the uninitiated, it's still a favorite with locals.

"We like people to try it and eat it, because most of the people like it," says Wayside innkeeper Steve Pickford. "It's sweet, it's sugary, it's good. But, it looks like crap."

He says the inn serves the pudding because it's a part of the area's history. The inn even uses stone-ground cornmeal, made on-site on an 18th century replica grist mill.

"The variety of corn that was initially grown here is call flint corn," explains miller Rich Gnatowski, who is all dressed up in his 1700s garb. He fills the machine with corn and sets the gears rolling. Soon a flood of cornmeal is rushing out, ready to take home and throw in the pudding pot. 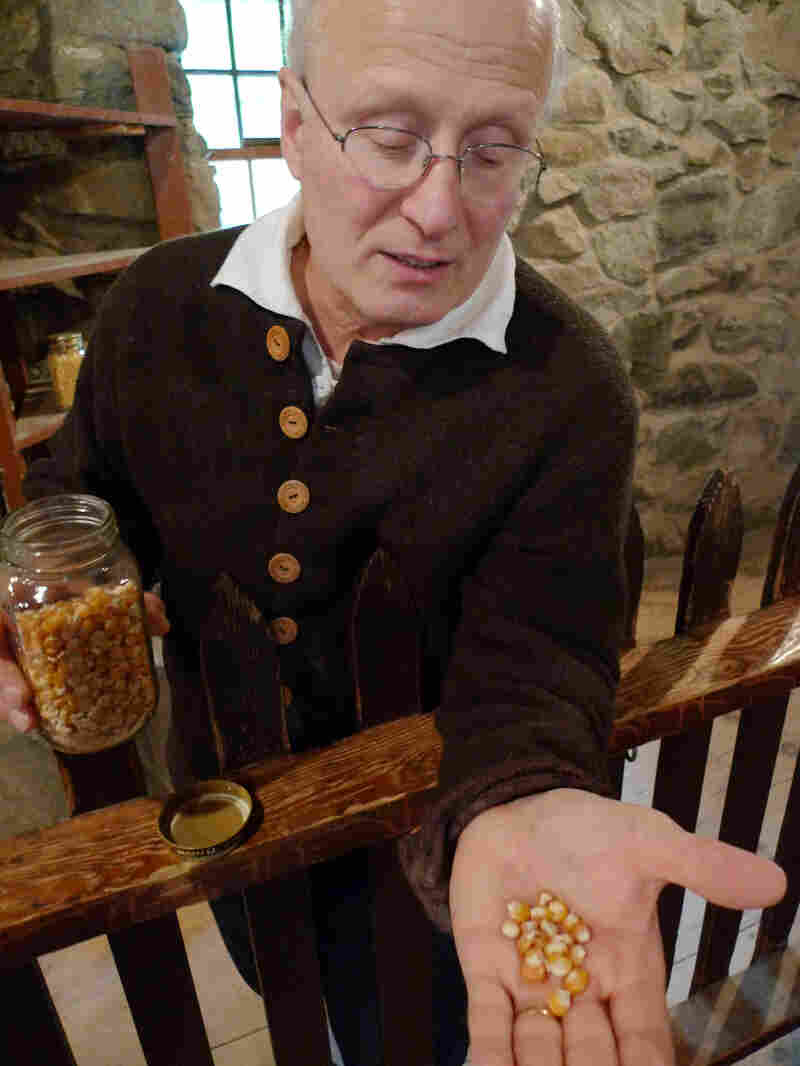 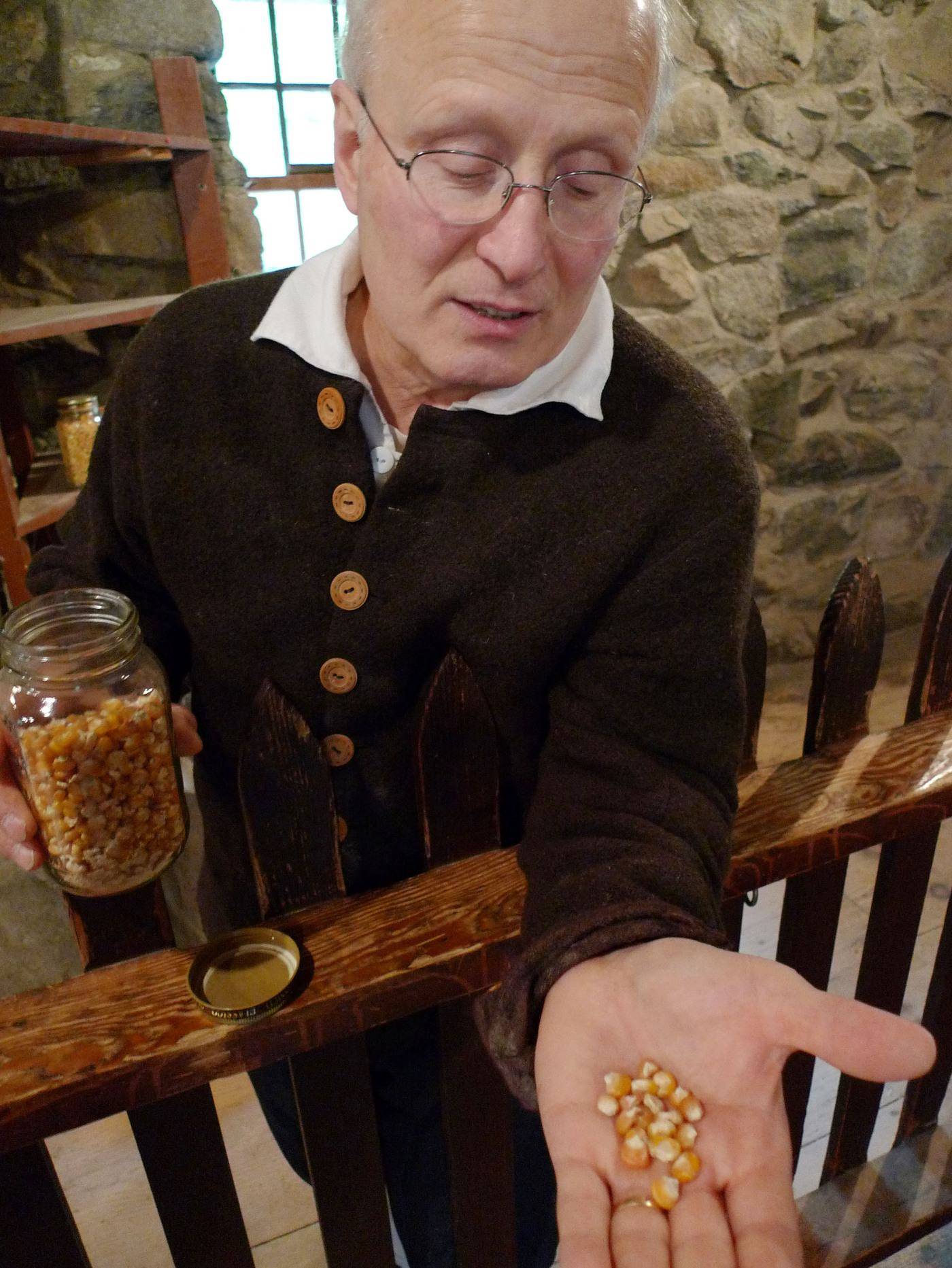 Miller Richard Gnatowski makes the cornmeal that the Wayside Inn uses in its Indian pudding.

Back in the kitchen, I re-create the Wayside Inn's pudding recipe. I start by throwing a cup and a half of cornmeal into boiling milk, and stir it till it thickens. The inn's pudding is the version some New Englanders remember: heavy with molasses, spiced with cinnamon and nutmeg, enriched with eggs and baked until it's silky, with a glossy, sticky skin.

The appearance doesn't dazzle — the finished product looks very shiny and brown. But it is delicious and comforting.

Wall says that she expects that soon, humble dishes like Indian pudding may see another heyday.

"I think New England cooking is on an upswing," she says. "That's just [from] looking at cooking magazines and seeing what they're trying to trend. And if they can put bacon and a cupcake on it, I think, like, we're set."

And maybe pickle it for good measure.

So, someday you might wake up and find: Surprise! National Pickled Bacon Indian Pudding Cupcake Day has sneaked up on you again.

Bring 2 quarts of milk to boil in a heavy pan. Add cornmeal to milk and blend with a wire whisk until it thickens. Add molasses, salt, cinnamon, nutmeg and ginger and bring to a boil. In a separate container, blend the 2 1/2 cups of milk and eggs and add the hot mixture to it and stir. Place in a very large, buttered and sugared casserole. Bake in a 350 degree oven approximately 1 hour. Test pudding with a knife for doneness. Let stand and then serve with whipped cream or vanilla ice cream.