Accessibility links
Philippines Disaster Rekindles Fight Over Food Aid Rules : The Salt The Philippine disaster is an example why it increasingly makes sense to buy food close to where its needed rather than ship it across the globe. Most U.S. food aid, though, travels to hotspots from U.S. ports. Critics say that wastes time and money. 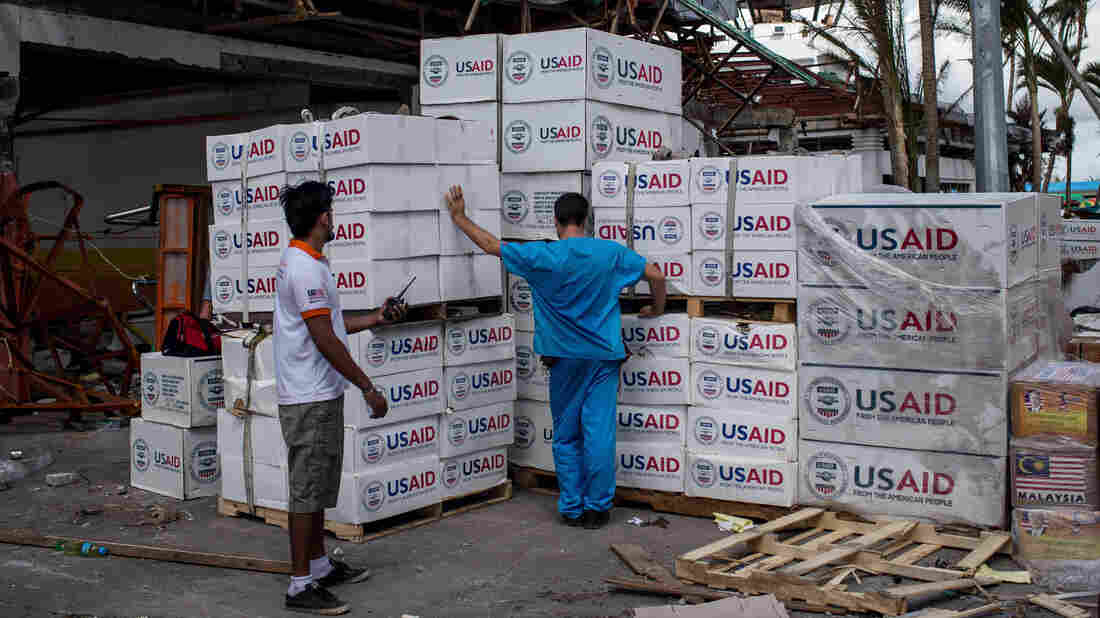 A relief worker looks over boxes of aid provided by the U.S. on November 14, 2013 in Leyte, Philippines. Proponents of food aid reform say it makes more sense for the U.S. to buy food donations locally than ship them across the globe. Chris McGrath/Getty Images hide caption 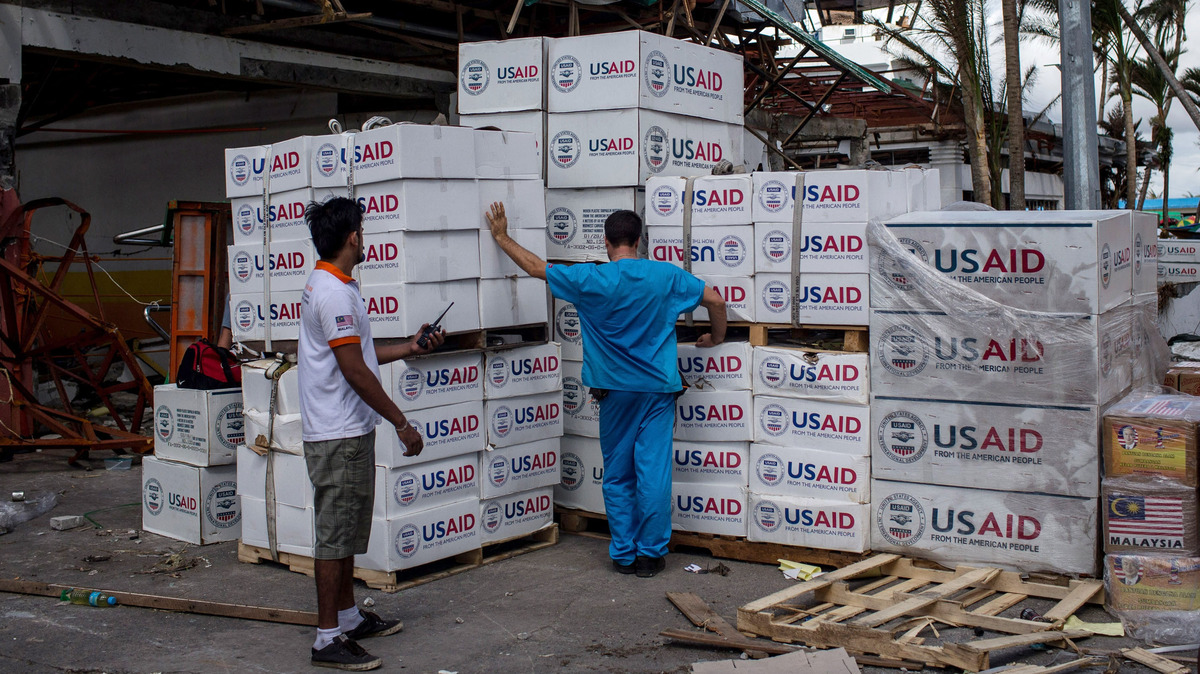 A relief worker looks over boxes of aid provided by the U.S. on November 14, 2013 in Leyte, Philippines. Proponents of food aid reform say it makes more sense for the U.S. to buy food donations locally than ship them across the globe.

Emergency aid, including stocks of food, started arriving this week in cyclone-devastated areas of the Philippines; more is on the way.

The first wave of aid — high-energy biscuits designed to keep people alive when food is scarce — arrived via airlift. Huge shiploads of rice will be needed in the weeks and months to come. And exactly how the U.S. donates of that rice is a flashpoint in a long-running debate in Washington, D.C., about food aid.

The World Food Program has asked international donors for $88 million worth of food in all for the Philippines. The U.S., long the world's biggest source of humanitarian food donations, is expected to provide roughly 25 to 30 percent of that total. The U.S. has already moved to provide one chunk, worth $10 million.

By coincidence, the cyclone struck just as a final efforts began in Congress to re-write the rules for food aid, and the disaster immediately reignited the conversation about reforming them on Capitol Hill. Advocates of reform called it dramatic evidence that the U.S. should provide more aid in the form of cash, rather than shipping food from American ports.

The Philippine disaster is, in fact, exactly the sort of situation where it makes sense to send cash for food. There's plenty of rice for sale elsewhere in the Philippines or in neighboring countries, such as Thailand. Buying it locally saves precious time and money.

Of the $10 million U.S. contribution so far, in fact, about $8 million is cash. The rest, $2 million worth of rice, will be shipped from Sri Lanka. That rice was grown in the U.S., then stored in Sri Lanka in anticipation of emergencies in Asia.

Traditionally, the U.S. delivered its food aid "in-kind," as grain shipped from American ports. The amount of cash aid has been growing in recent years, but still is limited to about $300 million each year, roughly 20 percent of the total American food aid budget. Last year, much of the cash was used in Syria. (It's fortunate for the Philippines, in fact, that the U.S. government's fiscal year just started — there's plenty of cash available to spend.)

The rules for farm aid are part of the farm bill, an embattled piece of legislation the Congress has been struggling to pass for an eternity. (OK, for almost two years.) The Obama Administration proposed a drastic increase in funding for cash aid, but Congress balked, in part due to vigorous opposition from groups with a stake in shipping food abroad, including farmers and shippers.

The House, in its version of the farm bill, kept the current limits on cash aid. The Senate voted to increase the amount of cash food aid by about $45 million each year.

Right now, a conference committee of members from both houses of Congress is negotiating a final version of the bill. Those who want the U.S. to send more cash abroad, rather than ships filled with grain, are pushing hard in support of the Senate's version.