Accessibility links
See How Food Stamp Cuts Are Hitting Across The U.S. : The Salt Oregon as a local food movement hub? That's obvious. Less so is the fact that one in five state residents rely on food stamps. That's one of the surprising facts that stand out in an interactive map that tracks how cuts that went into effect on Nov. 1 are affecting the country. 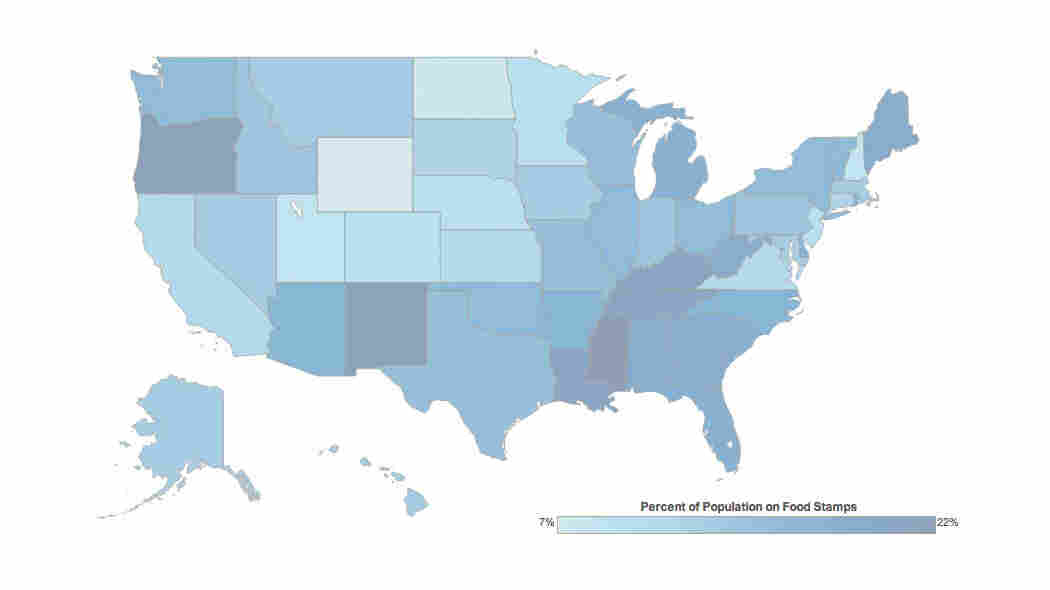 Screen grab of a map that shows hard numbers about who's getting hit by food stamp cuts. Stateline hide caption

When you think of Oregon and food, you probably think organic chicken, kale chips and other signs of a strong local food movement. What probably doesn't come to mind? Food stamps.

And yet, 21 percent of Oregon's population – that's one out of every five residents – relies on food stamps to get by. And like many people across the country, these Oregon families who have come to rely on federal food assistance program for meals are learning to make do with less as of this month.

That's one of the surprising statistics brought out by Stateline's interactive food stamps map, which tracks how each state is being affected by cuts in the Supplemental Nutrition and Assistance Program that went into effect on Nov. 1. The program, which helps feed 47 million Americans, saw $5 billion in reductions when a temporary boost in benefits enacted as part of the federal stimulus package expired.

In the past few weeks, media outlets have told compelling, sometimes heartbreaking stories of families who rely on food stamps forced to make even harder choices – buying less milk for the kids, eschewing meat purchases as too pricey.

Interestingly, Stateline's map shows how cold, hard numbers can also serve to humanize the problem. For instance, as the map shows, in Oregon, 304,000 kids and 159,000 elderly people and those with disabilities have seen their benefits cut.

Another fact that jumps out when looking at the map: While Republicans have led the call to slash the SNAP program in the House, many of the states whose residents are most reliant on food stamps are reliably Republican and located in the GOP's Southern heartland. About 20 percent of the population in Tennessee, Georgia, Louisiana, Mississippi, Kentucky, and South Carolina, for instance, receive benefits from the federal food assistance program.