Accessibility links
How To Prepare For Climate Disasters? Artist Says Dehydrate Food : The Salt After he ran out of food during Hurricane Sandy, New York artist Tattfoo Tan vowed to be better prepared for future climate-related disasters. His latest art installation features meals made from dehydrated vegetables that will last one year on the shelf.

How To Prepare For Climate Disasters? Artist Says Dehydrate Food

How To Prepare For Climate Disasters? Artist Says Dehydrate Food 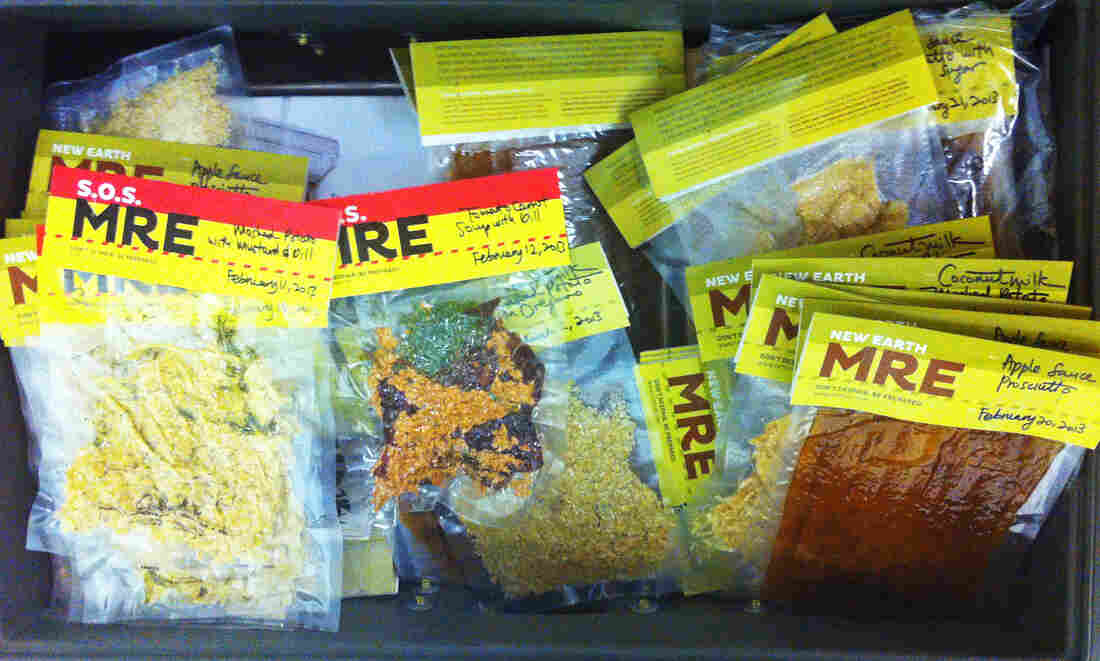 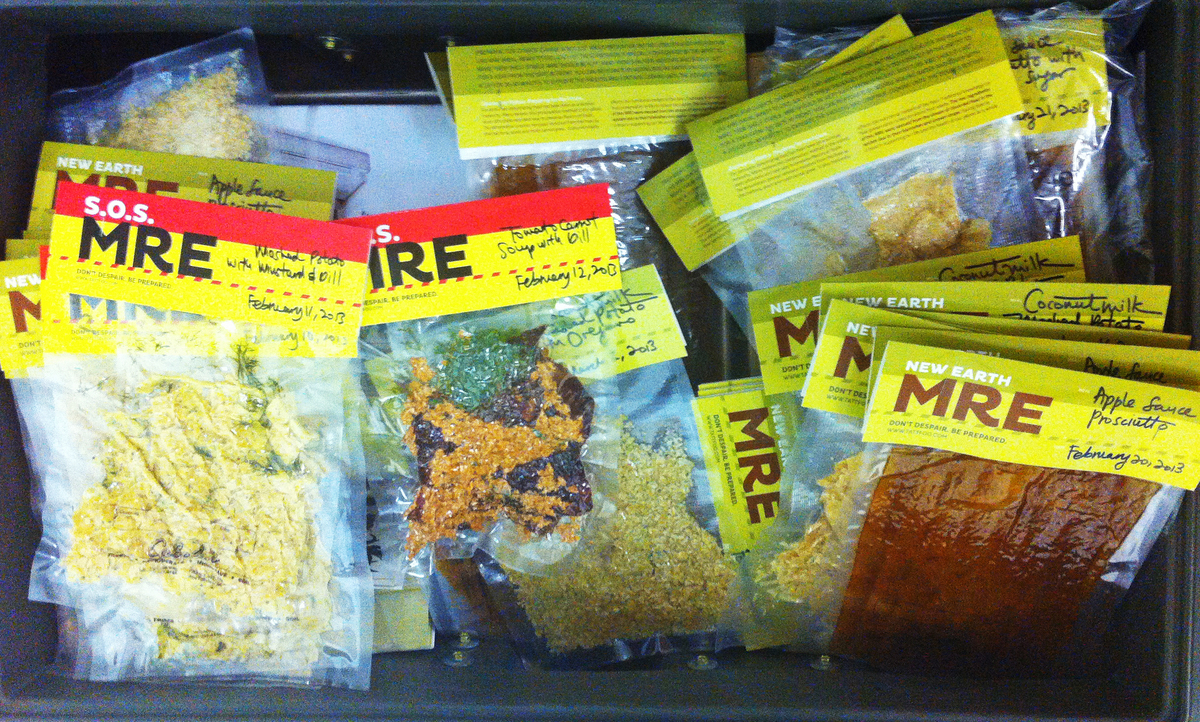 Artist Tattfoo Fan used a dehydrator to make vegetables shelf stable for a year for his New Earth - Meals Ready to Eat project.

Emergency aid workers are rushing this week to get food aid to the victims of Typhoon Haiyan in the Philippines — just the latest reminder of how vulnerable the food supply can be when disaster hits.

Artist Tattfoo Tan felt this acutely after Hurricane Sandy slammed into New York City in 2012. In Tan's neighborhood on Staten Island, the storm surge and pounding rain flooded his local grocery store, and he soon ran out of food.

"Sandy made me nervous — I had to go all the way to Manhattan to get food," Tan tells The Salt. "I wondered: If this happens again, am I going to have enough food?"

After the storm, Tan began thinking about how to send a message about being better prepared for more climate-related disasters. He eventually stumbled upon the idea of dehydrating food (to extend its shelf life) as art.

Tan, who was born in Malaysia and moved to New York in 2000, calls himself a "social sculpture artist" who collaborates with the public around ecology, food and urban agriculture issues. He has studied permaculture and composting, and since 2010, he has been raising egg-laying hens in his backyard. 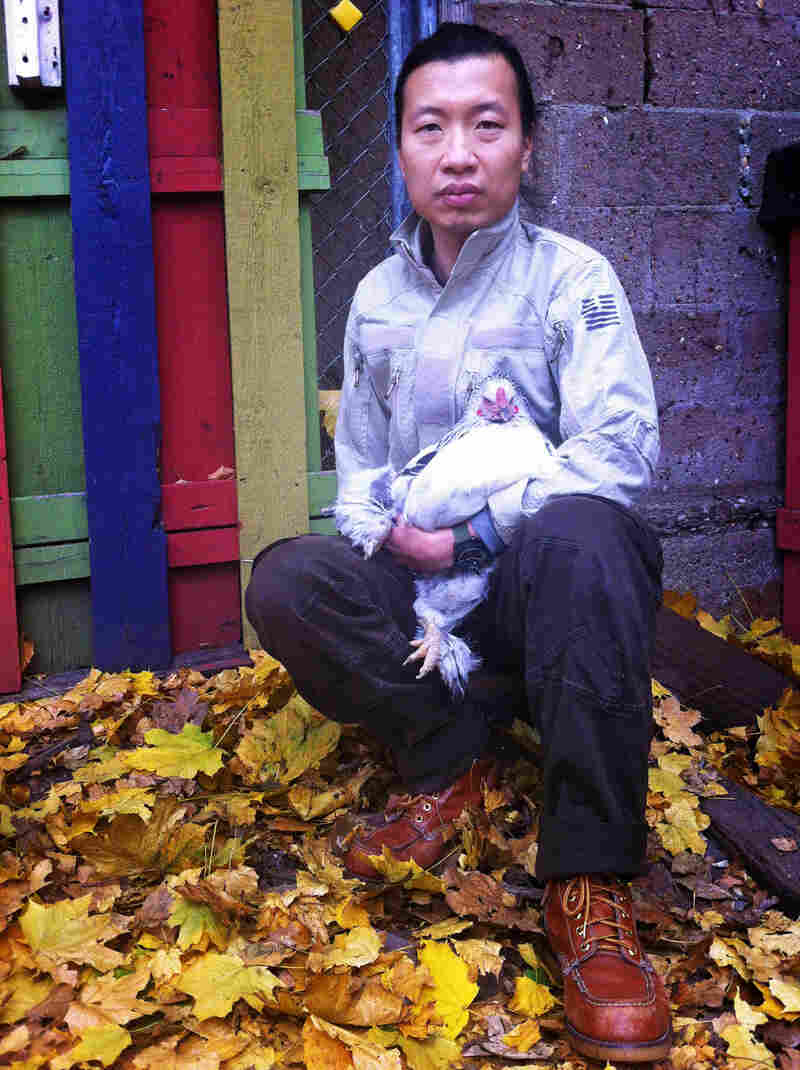 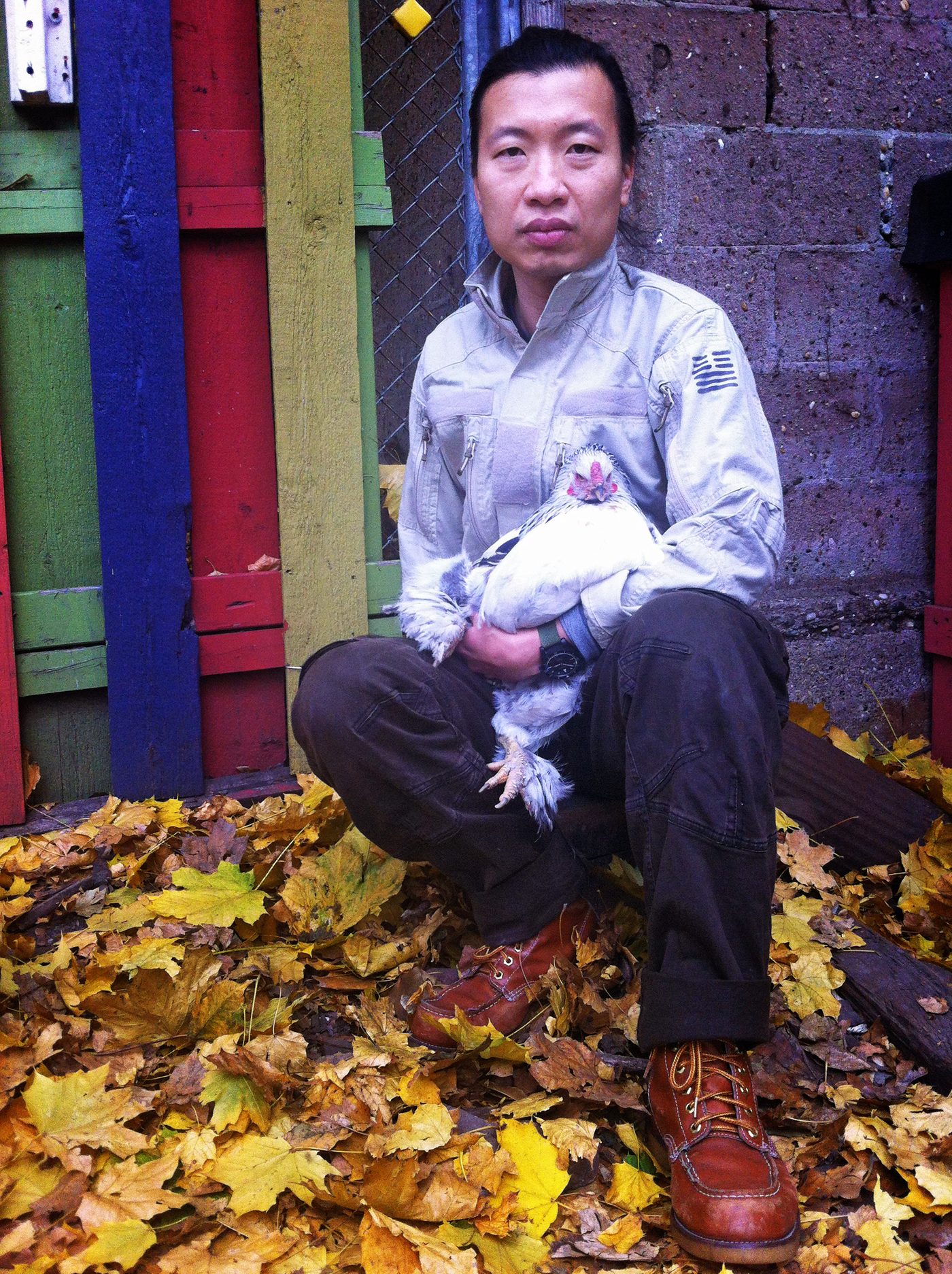 Fan raises egg-laying hens in the yard behind his studio on Staten Island.

As Tan started plotting how to design food for climate emergencies, he spotted a surplus in the food system: ugly vegetables too misshapen or mottled for farmers to sell. He rescued the vegetables from a local market, and began to dehydrate them in a dehydrator and experiment with recipes. Then he vacuum-sealed them so they would last for up to a year.

"Dedrydrating food is actually an old technology, developed before we had refrigeration," says Tan. "I'm using a contemporary version of it, because once again we might need it in case of emergency."

His concoctions, which he calls New Earth - Meals Ready to Eat, include dehydrated bits of potato, coconut milk and oregano, which, with a little hot water, can be reconstituted into a flavorful version of mashed potatoes. Another is the apple sauce and prosciutto, with dried apple and ham. (He wasn't offering samples when The Salt visited his studio.)

In all, Tan has produced about 500 of these meals, which bear the motto, "Don't Despair, Be Prepared" and are inspired by camping food and military food. They're currently on display at his studio on Staten Island, as part of a citywide art exhibition running through the end of November dedicated to climate change science, environmental activism and artistic practice, called the Marfa Dialogues.

Next they'll appear in an exhibition in the Brooklyn neighborhood of DUMBO.

While he has no intention of selling the MREs (or even eating them, unless all his exhibitions wrap up before the end of their shelf life), Tan hopes they will inspire others to dehydrate food that's going to waste to prepare for coming disasters. As he writes on his website:

"This is a wake up call. When disaster happens, there will be no food, and no road, no petrol, no car to buy any food anywhere. Why place ourselves in a position of helplessness? We should not despair, but be prepared."