Accessibility links
Why Slather This Spinach Field In Poop? It's All For Science : The Salt Food safety researchers in California are trying to find out how long E. coli in raw manure spread on a field might survive on a spinach farm. They're tweeting about it, too.

Why Slather This Spinach Field In Poop? It's All For Science

Why Slather This Spinach Field In Poop? It's All For Science 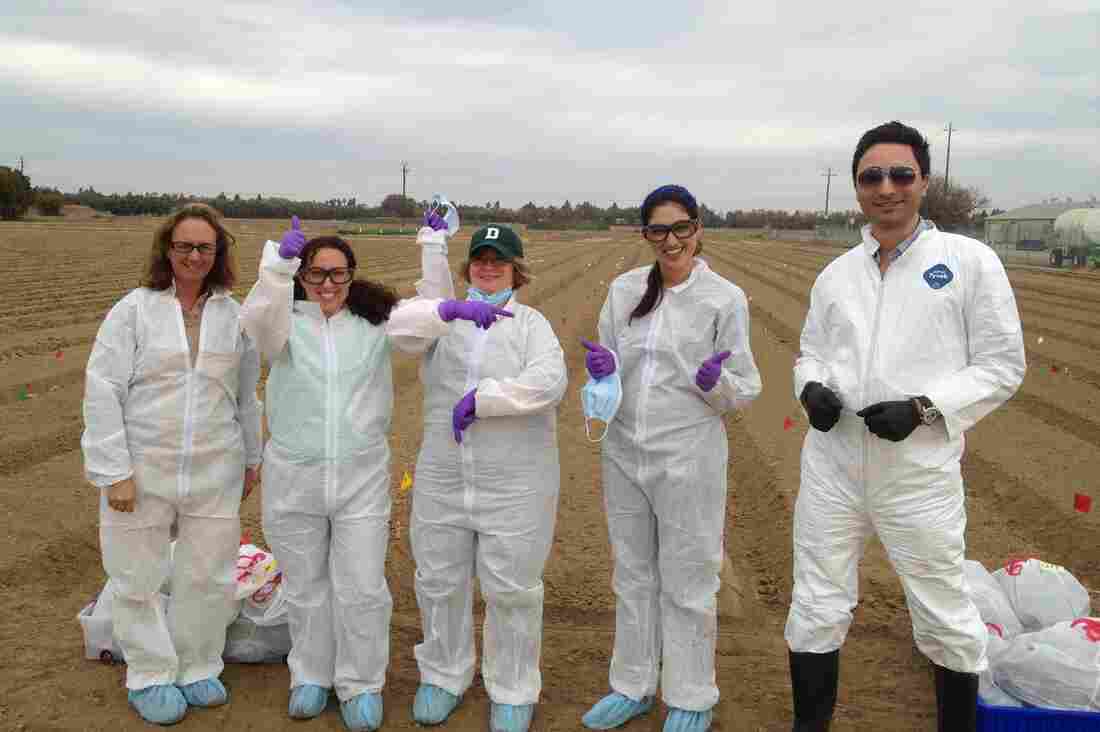 Why are these scientists in hazmat suits smiling? They're standing in a field that they are about to spread with raw manure — four different kinds of raw manure, to be exact. 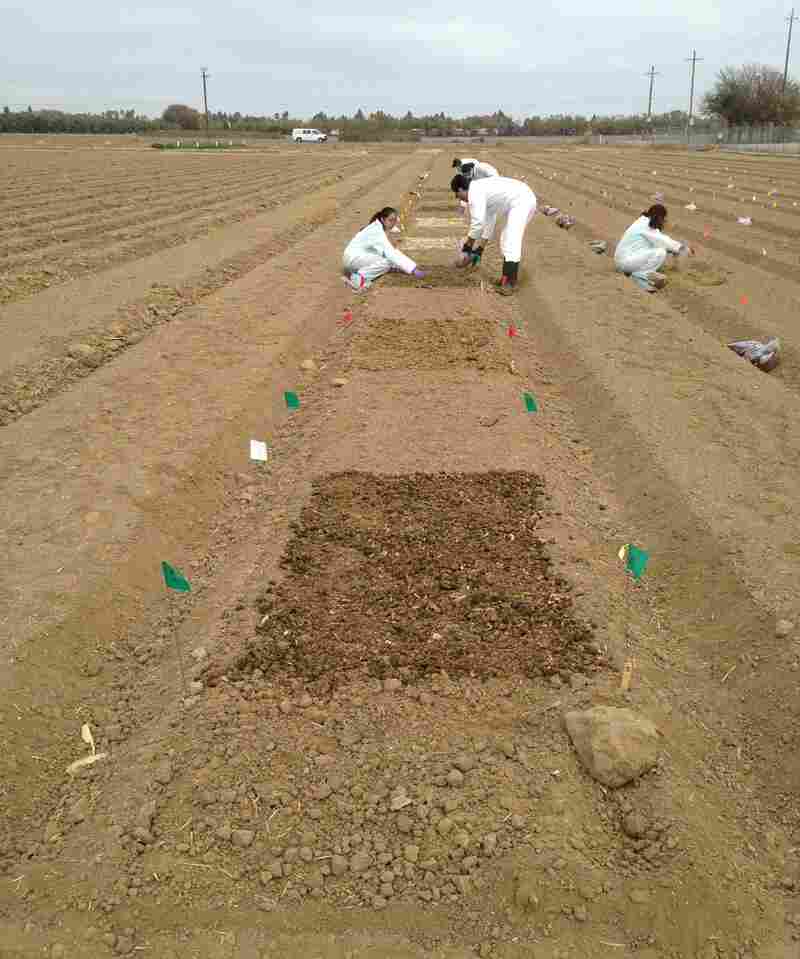 The scientists spread four kinds of raw manure on a field in Salinas, Calif., as part of an experiment to test how long strains of E. coli live in soil where leafy greens are grown. Courtesy of Fhon Saharuetai hide caption

In a nutshell, Jay-Russell and her team are trying to see how long E. coli in raw manure survives in the soil, and how much gets onto leafy greens harvested months later.

The experiment comes as the Food and Drug Administration is proposing a rule requiring many produce growers to wait nine months between applying raw manure to a field and harvesting crops there. That's because the agency sees raw manure as a food safety risk.

However, the proposal contradicts what the U.S. Department of Agriculture has said is OK for organic growers: four months between application and harvest. And that's got many small organic growers who are used to using cheap, raw manure rather than the more pricey, treated manure, pretty upset with the FDA, as you heard in our colleague Dan Charles' story.

To see if four months is really long enough for the bad bacteria to die off, Jay-Russell is setting up a growing site on a UC-Davis field in Davis, Calif. "We're kind of pretending we're an organic spinach grower," she says. 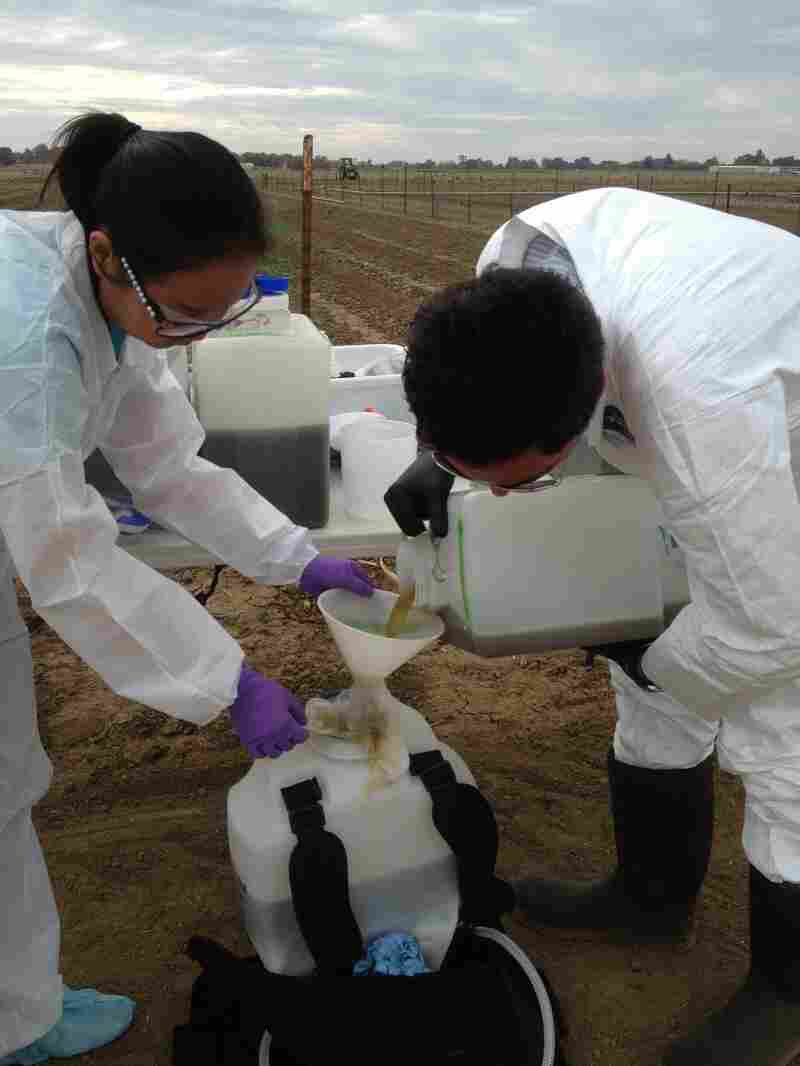 The scientists measure slurry with E. coli into backpacks for spraying on fields. Courtesy of Fhon Saharuetai hide caption

First, the team went to the field to lay down the four kinds of manure — goat, dairy, horse and chicken litter.

Then, the team sprayed the manure with an E. coli slurry in both high and low concentrations from the kind of backpack sprayers often used for pesticide applications.

Now they measure and wait. "We'll be collecting 40 samples a day, we'll be measuring the level of the actual concentration of the bacteria, ... then we'll plant the spinach in February and harvest in eight weeks and test again," Jay-Russell says. The team will set up a second trial in January and leave the manure for nine months to test the FDA proposal.

The experiments are being funded by grants from the USDA Specialty Crop Research Initiative and the University of California, Davis' FDA Center of Excellence. And they'll be published in the usual, scientific way: first presented at a conference of scientists, then printed in a scholarly journal where only a few people will actually read it.

But Jay-Russell wants to make the experiment and the process of doing a science experiment more widely known to the public — hence the Twitter updates from the field of manure that caught our eye.

"This is how science works!" she says.