Accessibility links
Party Like It's 1799: Traditional Cider Makes A Comeback : The Salt Cider is still a small part of the overall alcohol market, but it's growing faster than any other category — and not just the hot mulled stuff that steams up your kitchen. This cider is more like sparkling wine. Some of it is made with the same apple varieties, and in the same style, as the cider bottled by Thomas Jefferson. 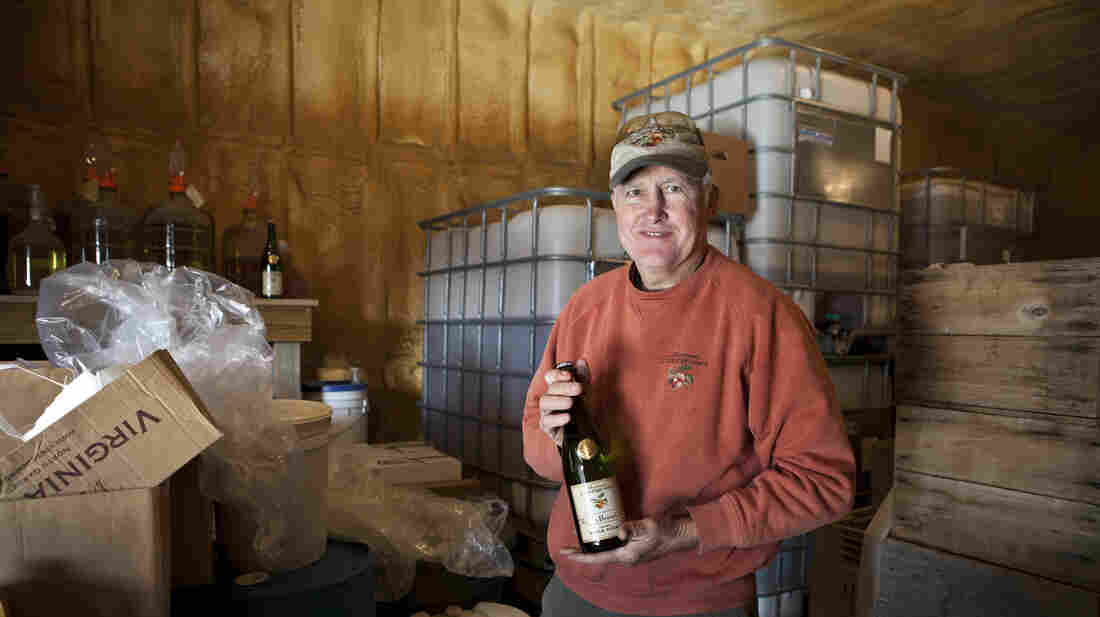 Chuck Shelton in the cold room at Albemarle CiderWorks in Virginia, which makes sparkling alcoholic cider with some of the same apple varieties used by Thomas Jefferson. Meredith Rizzo/NPR hide caption 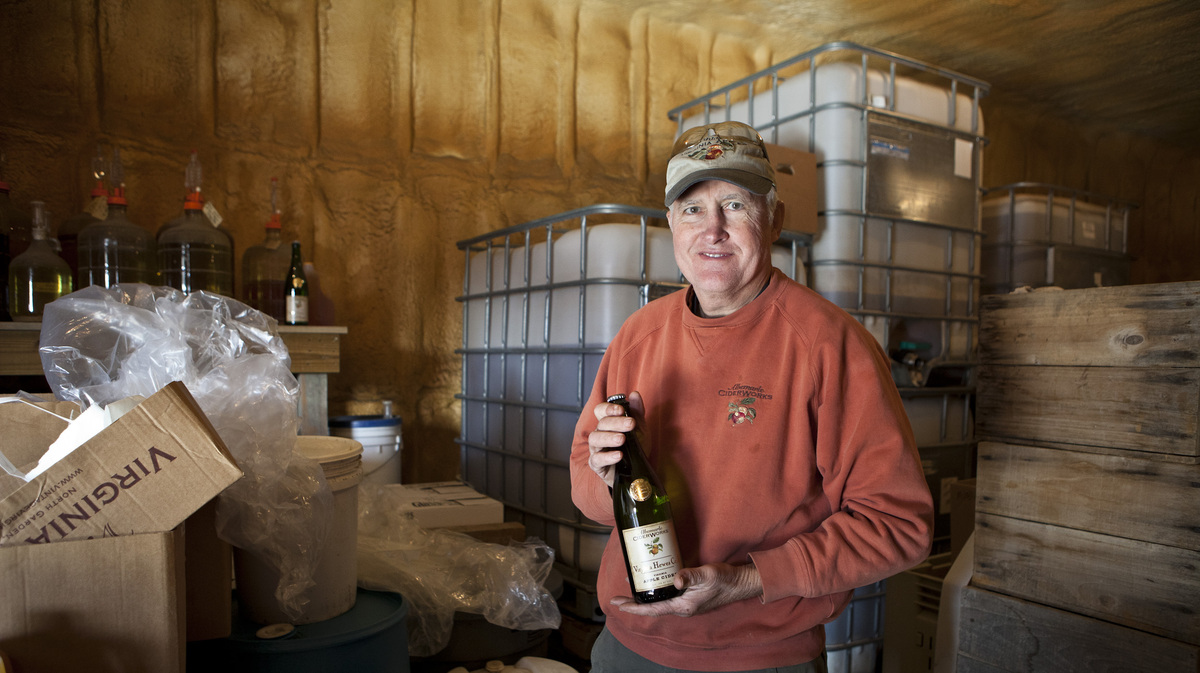 Chuck Shelton in the cold room at Albemarle CiderWorks in Virginia, which makes sparkling alcoholic cider with some of the same apple varieties used by Thomas Jefferson.

We're not talking about the hot mulled stuff that steams up your kitchen, or the sweet pub draft in a pint glass. This cider is more like sparkling wine.

"This is a phenomenally funky, sour, even mildly smoky cider that has to be tasted to be believed," says Greg Engert, one of the owners of a bar in Washington called ChurchKey. He's pouring cider from a tall champagne-style bottle that retails for around $15.

ChurchKey is a bar known for beer, but on this night, lots of people are drinking cider.

Tom Diliberto has celiac disease, so beer is out for him. Cider, on the other hand, is gluten-free.

Cider is still a small part of the overall alcohol market, but it's growing faster than any other category, according to Donna Hood Crecca, an adult beverage analyst with the company Technomic.

Most of that comes from major beer makers that have jumped into the cider game. The companies that brew Sam Adams, Coors and Budweiser have all gotten into the apple fermenting business in the past couple of years.

But just as craft microbrews have taken root in the beer market, artisanal ciders are now growing in the shadow of the big guys.

Vintage Virginia Apples and Albemarle CiderWorks is just around the bend from Thomas Jefferson's Monticello in Virginia. "If we were crows we'd get there very shortly, but it would take us probably 20 minutes by the way the roads go," says Charlotte Shelton, who with her brothers grows some 200 varieties of rare American apples here — fruit with names like Ashmead's Kernel, Arkansas Black, Burford Red Flesh and Geneva Crab.

America's Founding Fathers grew some of these varieties, more often for drinking than for eating.

"We think Mr. Jefferson would've been proud to put this on the table," says Charlotte.

While she works the finances, her brother Chuck Shelton turns the fruit into cider.

This whole cider thing started when the siblings gave their dad — who's 93 now — an old hand-cranked cider press for Father's Day years ago.

Today the hand crank is more for display. The real cider-making process is far more high-tech, similar to a winery, says Chuck. 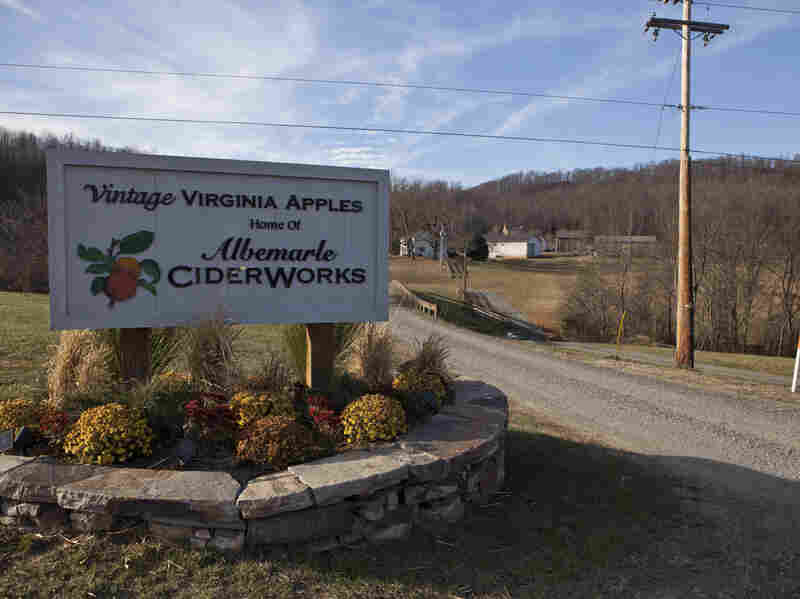 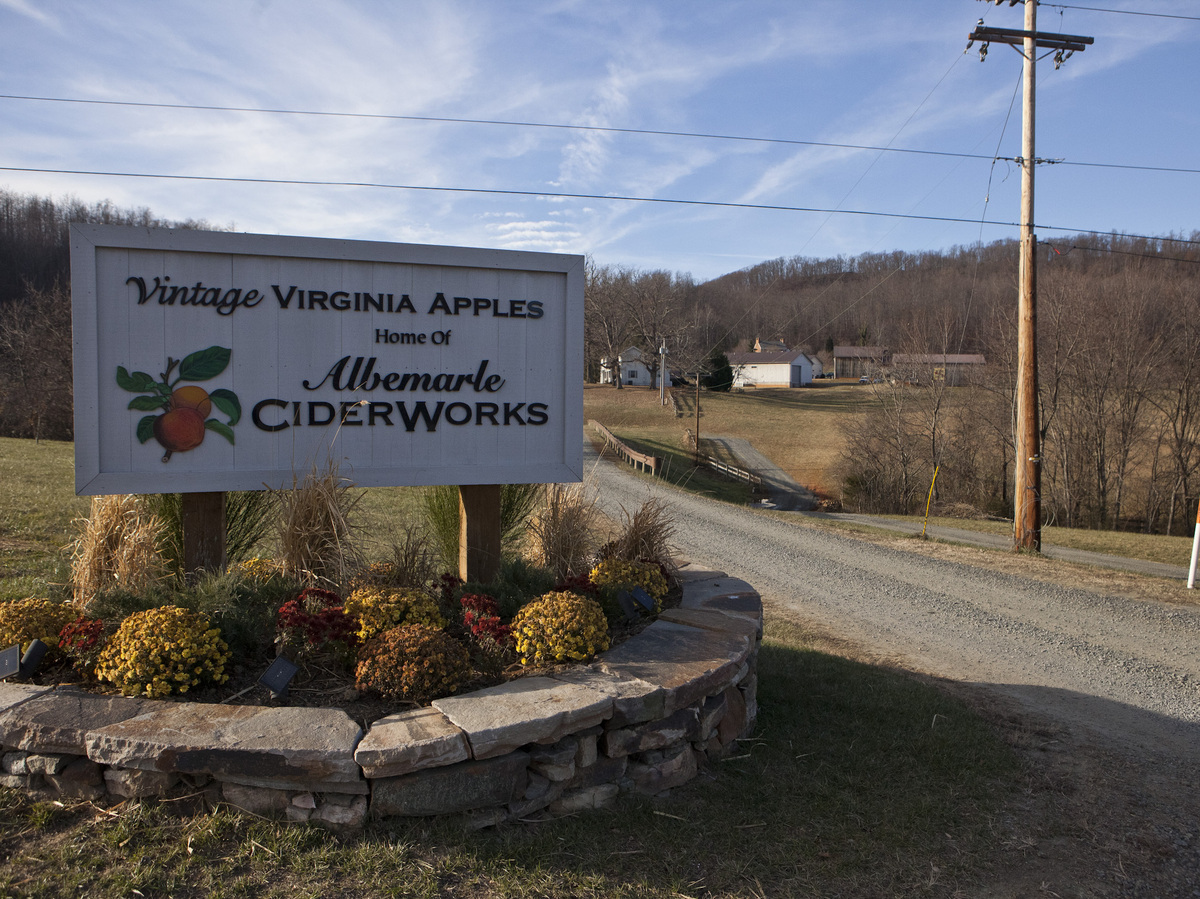 The entrance to Albemarle CiderWorks in North Garden, Va.

To find out what it tastes like out of the bottle, we head to the tasting room.

Chuck pours a cider called "Jupiter's Legacy," which is named after one of Thomas Jefferson's slaves, Jupiter Evans.

"Jupiter passed away I think in 1798, and things bad started happening with the cider," explains Chuck. "They bottled too early, and bottles were exploding. So Jefferson wrote this letter saying, 'You need to find someone with the skills necessary to take over the bottling, because we can't have our cider crop exploding.' ... There's a letter to that effect, and we call it 'Jupiter's Legacy'."

The apples are sweet, but none of that sweetness comes across in the cider. All that yummy sugar in the fruit turns into yummy alcohol during the fermentation process.

"People come in here and haven't had cider other than ... commercial ciders, and they say, 'Ooh,' " says Chuck. "They think it's going to be sweet, and it's not."

I ask him: Do you get people walking out?