Accessibility links
Fast-Food Workers Across The U.S. Cry Poverty Wages, Demand Better Pay : The Salt Thousands of restaurant workers protested Thursday in cities around the country, calling for an increase in wages to $15 an hour. Many fast-food workers make so little that they rely on public assistance to get by, even as profits at many franchises have nearly doubled in recent years. But not everyone agrees that raising the minimum wage will fix the problem. 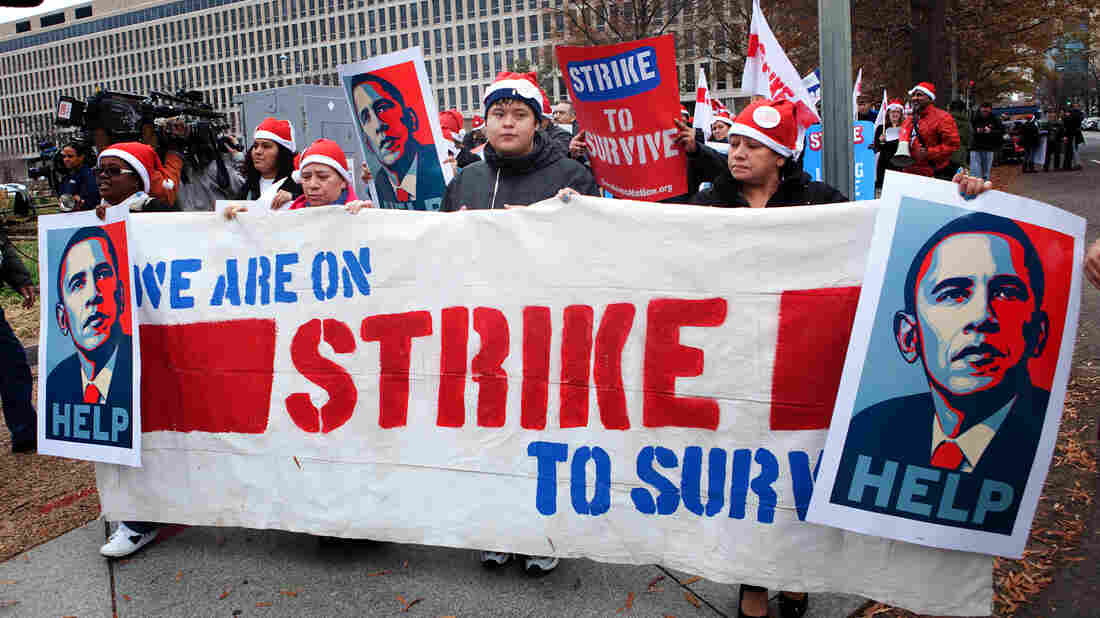 Fast-food workers march toward the Smithsonian's National Air and Space Museum in Washington, D.C., on Thursday. Similar rallies occurred in about 100 cities across the U.S. Morgan Walker/NPR hide caption 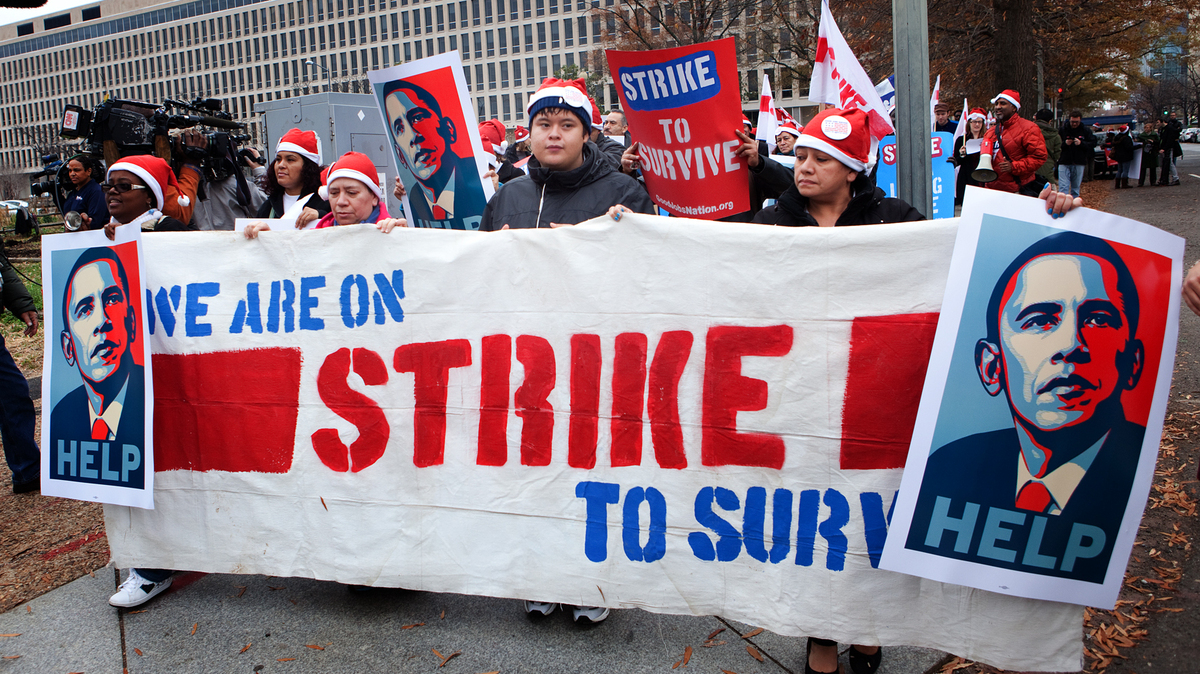 Fast-food workers march toward the Smithsonian's National Air and Space Museum in Washington, D.C., on Thursday. Similar rallies occurred in about 100 cities across the U.S.

When you're making eight bucks an hour, which is pretty typical in the fast-food industry, it's tough to make ends meet.

And increasingly, the working poor are asking this question: Why am I living in poverty, even when I'm working full time?

That's the message that thousands of fast-food workers rallying Thursday in about 100 U.S. cities — from Oakland to Memphis to Washington, D.C. — are trying to get across. A living wage in big cities is closer to $14 an hour, and it jumps to about $20 an hour for an adult supporting a child.

The protests are part of a growing campaign backed by a coalition of advocacy groups, religious organizations and union organizers aimed at raising fast-food wages to $15 an hour.

But not everyone agrees that raising the federal minimum wage will fix the problems of fast-food workers struggling to make ends meet. "I would oppose raising the minimum wage to $15 an hour," says Michael Strain of the American Enterprise Institute. 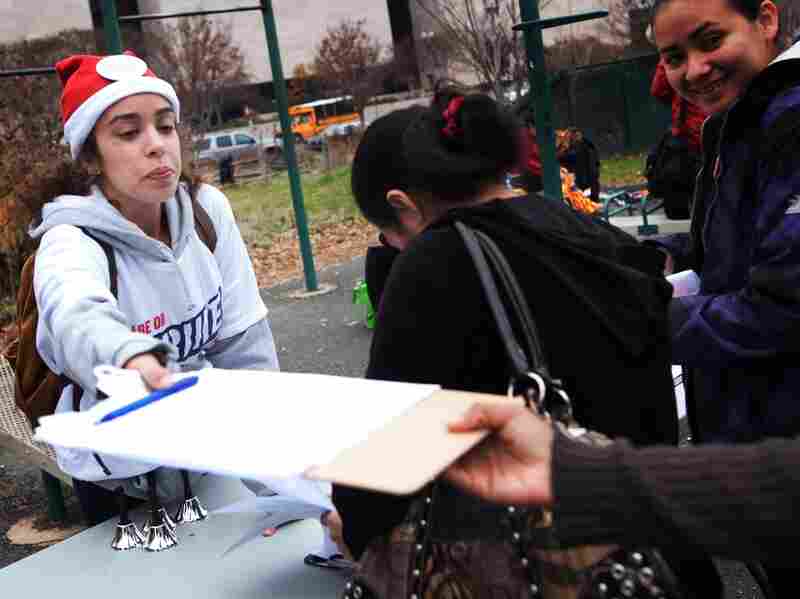 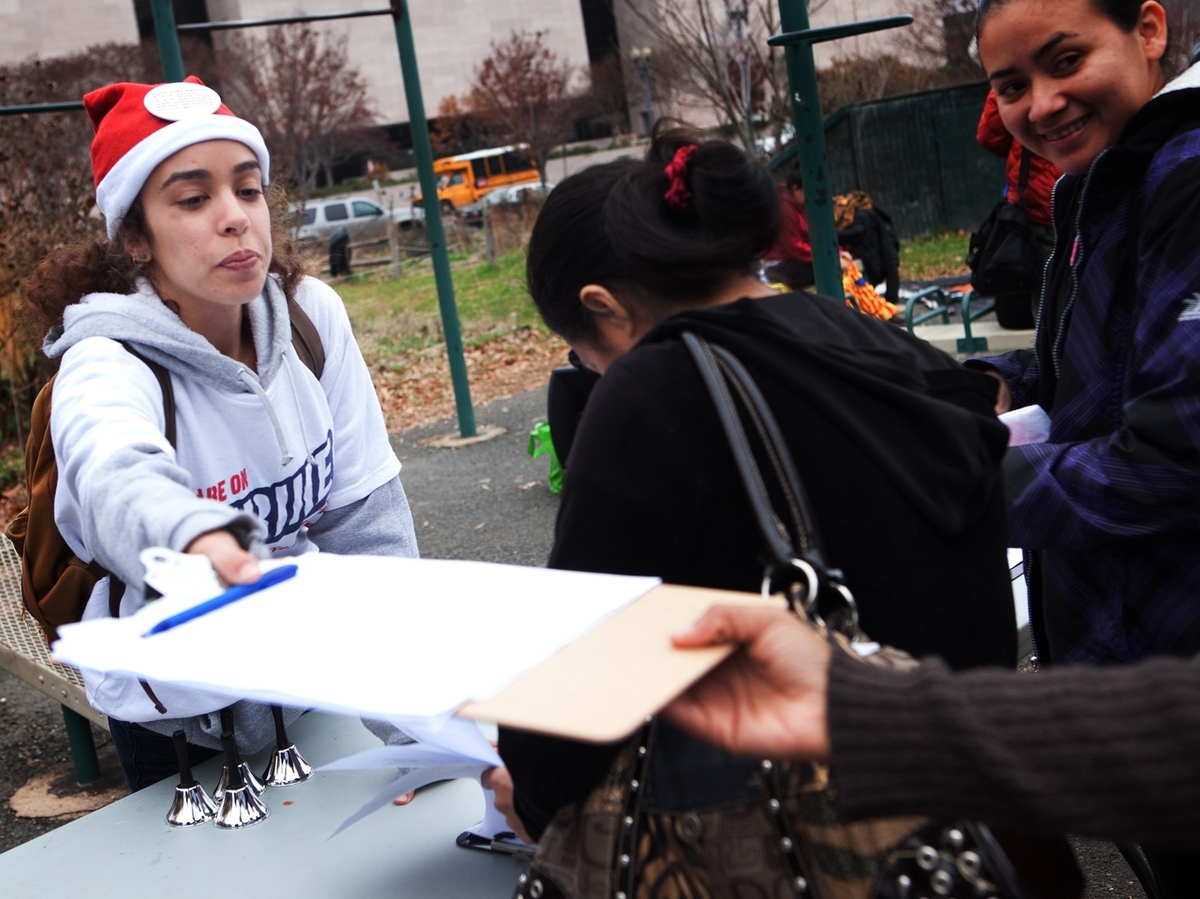 Amal Mimish, an organizer with Good Jobs Nation, registers protesters at the fast-food-workers' rally in Washington, D.C., on Thursday.

Such a hike in wages would lead to higher prices at the fast-food counter for all of us, Strain says, and employers would hold back on hiring. In addition, fast-food chains might replace people with new automated technology, which could be cheaper over time, he says.

At at time when the fastest-growing jobs in the U.S. economy are also the lowest-paid, the issue of income inequality is on the lips of leaders worldwide.

From the remarks by Pope Francis a few weeks back to President Obama's speech Wednesday, it's clear that there's growing unease about the divide between the haves and the have-nots.

And the image problem for the fast-food industry is exemplified by this online petition urging McDonald's chief executive officer, Donald Thompson, to cancel his order for another corporate jet until he pays all his employees a decent wage.

According to the petition, McDonald's just bought a $35 million luxury Bombardier jet for its corporate executives. Yet many of the company's employees make so little that they rely on public assistance to get by.

"It's not right to impoverish your employees while sailing above them at a rate of $2,500 an hour," reads the petition started by the Campaign For America's Future. "It's immoral to do it with a taxpayer subsidy."

McDonald's President Was Caught Off Guard By Low-Wage, Single Mom

In a recent study, economists at the University of California, Berkeley, found that 52 percent of fast-food workers rely on taxpayer-funded public assistance programs, such as food stamps or Medicaid.

"Taxpayers are subsidizing the low-wage model of these employers, who are making record profits in some cases," says Dorian Warren, an associate professor at Columbia University who studies income inequality.

McDonald's didn't comment on the new round of protests Thursday. But back in October, a company spokeswoman told The Salt that McDonald's history is full of examples of individuals who worked their first job with the company and then went on to have successful careers — both within and outside of McDonald's.

As for the push from workers for higher hourly wages, McDonald's "does not determine wages set by our more than 3,000 U.S. franchises," a spokeswoman for the company says.

But at the restaurants run by the company — fewer than 10 percent of the roughly 14,000 McDonald's outlets in the U.S. — the spokeswoman explains, "we pay salaries that begin at minimum wage, but range up from that figure, depending on the job and employee's experience level."

And according to an analysis by the financial information company Sageworks, many franchise operators are seeing significant increases in sales revenue.

So what will it take to push up wages? Depends on whom you ask.

Increasingly, politicians are under pressure to raise the federal minimum wage. The president made his case Thursday. And already, a patchwork of state and municipal pay hikes have been passed. For instance, New Jersey passed a ballot initiative to raise its minimum wage by $1 to $8.25 an hour. And many workers in the city of SeaTac, Wash. — home to the Seattle airport — will get a raise to $15 an hour.

"The federal minimum wage has lagged behind the rising cost of living for the past four decades," says Jack Temple of the National Employment Law Project.

According to Raise The Minimum Wage, a project of the National Employment Law Project, the minimum wage would be $10.74 if it had kept up with inflation over the past 40 years.

"Workers' backs are against the wall," Temple says.

Strain favors responses that wouldn't put the onus on business owners, such as an expansion of the earned income tax credit or other subsidies.

Otherwise, free market economists say, low-skill workers run the risk of being priced out of the job market.

It's true that the fast-food industry has given lots of young workers a start in the job market. In fact, the current CEO of McDonald's started behind the counter of a Michigan McDonald's decades ago.

But at a time when 70 percent of fast-food workers are in their 20s or older and one-quarter are raising children, the demands for higher wages are growing.