Accessibility links
Mushroom Foraging: When The Fun(gi) Hunt Gets Out Of Hand : The Salt Foraging for fungi and other wild edibles has grown in popularity in the U.S. and abroad in recent years, fueled by guidebooks, Internet buzz and hype from chefs. As a result, some known mushroom hunting grounds are taking a beating. 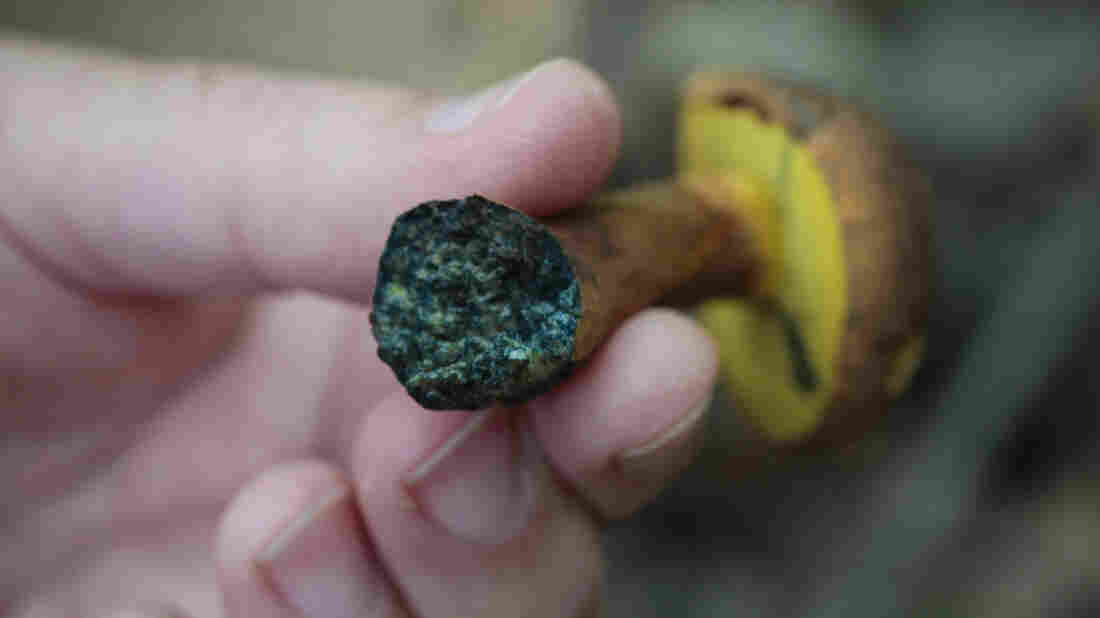 Hank Shaw, author of Hunt, Gather, Cook, snaps the end off a mushroom in a Washington, D.C.-area park. When broken, the inside turns blue, identifying it as an inedible species of bolete. The Washington Post/Getty Images hide caption 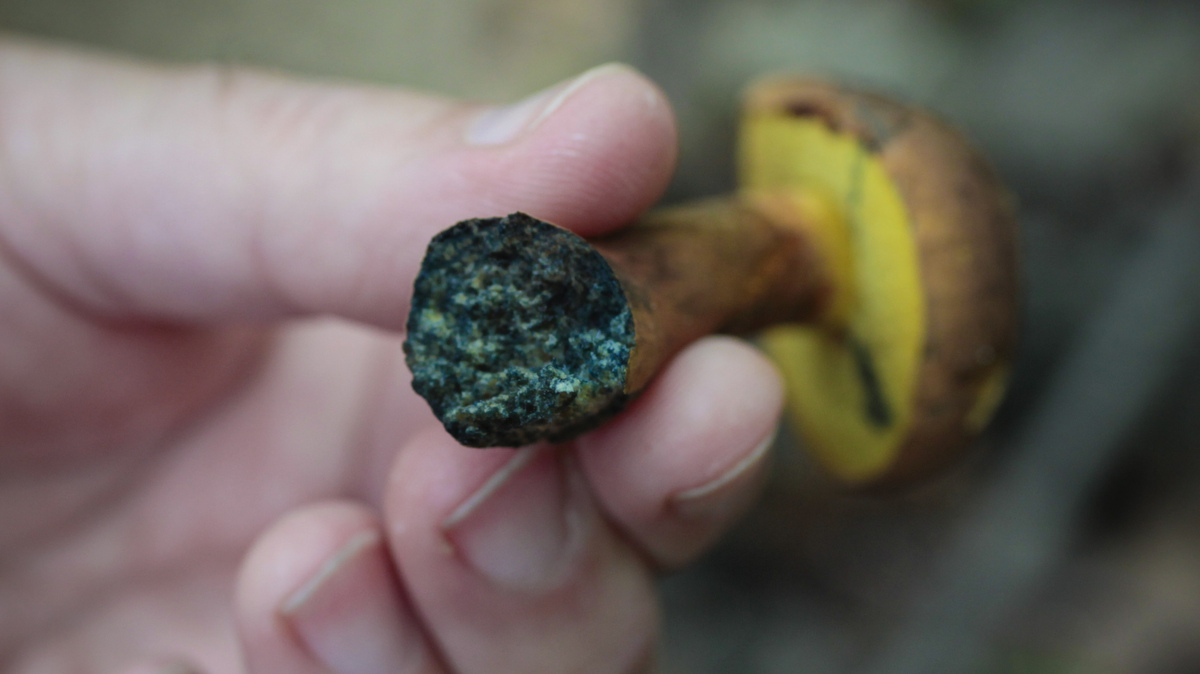 Hank Shaw, author of Hunt, Gather, Cook, snaps the end off a mushroom in a Washington, D.C.-area park. When broken, the inside turns blue, identifying it as an inedible species of bolete.

The first heavy rains of the season fell two weeks ago at Salt Point State Park, on the northern California coast, and now ranger Todd Farcau is waiting anxiously for the forest floor to erupt with mushrooms.

That first bloom of fungi, which has been delayed by drought, will draw mushroom hunters — crowds of them — and that is what Farcau is nervous about. Mushroom hunting, which is legal in Salt Point State Park but prohibited in most other California parks, has grown in popularity in the past five years, thanks to foraging classes and tours, word-of-mouth publicity and hype from chefs who are featuring wild mushrooms in their restaurants.

As a result, known mushroom grounds are taking a beating. At Salt Point State Park, mushroom hunters sometimes carve new trails into the forest, trample small plants, and illegally use rakes and shovels to turn over the forest floor in search of young, budding mushrooms, according to Farcau. Some, he adds, leave trash piles by the road and toilet paper in the woods.

"It looks like a rock festival has passed through," Farcau says.

Mushroom hunting has grown more popular elsewhere, too. Todd Spanier, a San Francisco-based commercial mushroom collector and vendor, tells The Salt that "it's a global thing." The slow food movement, Spanier says, combined with the Internet age, is inspiring foodies everywhere to walk into the woods with their eyes on the ground.

Sure enough, concerns have grown in places as scattered as England and Washington, D.C.-area parks about the burgeoning numbers of fungi foragers, both commercial and recreational, and the effect they may be having on the land.

Foragers are hungry for more than mushrooms, too. In the eastern U.S., the number of people hunting for ramps, a fragrant onion-odored wild bulb, has increased dramatically — perhaps even unsustainably. In New York City's Central Park as well, how-to tours like those of "Wildman" Steve Brill have reportedly caused a boom in the number of urban foragers seeking edible greens and roots, creating a nuisance for city gardeners and park rangers, according to The New York Times. (Update: City officials eventually softened their stance and reportedly hired Brill as a naturalist.)

Not that mushroom hunting is anything new. Across Europe and Asia, generations of families have returned to the same forested places to collect edible fungi. These mushrooms — including famed truffles, morels, porcini, chanterelles and matsutake — attract people with their unique flavors and aromas, which cultivated species tend to lack.

In California, the core of the mushroom hunting culture was traditionally European immigrants and a small community of eccentric hobbyists. But foraging classes, guidebooks, Internet buzz and even mushroom-identification smartphone apps have brought mushroom hunting into mainstream foodie culture.

David Campbell, who leads mushroom hunting outings with his company, MycoVentures, has made Salt Point State Park the location of monthly forays. He says he recognizes that he is "guilty" of helping to fuel the foraging craze.

"It's a delicate balance between sharing, which I like to do, and protecting your [mushroom] patches from public knowledge," says Campbell, who charges $45 a head for one-day outings.

Another regular Salt Point mushroom hunting tour leader, Patrick Hamilton, concedes that his guided walks in the woods, which cost $90 a head, may be having an impact on a limited resource.

"I have been personally responsible for turning a lot of restaurant chefs on to wild mushrooms, and I've sometimes asked myself, 'Is this really what we want to be doing?' " Hamilton says.

In most areas open to mushroom hunting, collectors must abide by strict limits. At Salt Point State Park, for example, hunters cannot take more than 5 pounds of mushrooms per day — though many people break this rule, ranger Farcau says.

Mushroom collecting is prohibited in most county, state and national parks in California, and while there has been informal discussion of closing off remaining legal collecting areas, some mushroom hunting enthusiasts say the best thing to do would be the opposite — that is, legalize the activity in more places.

"Salt Point gets hit so hard because it's the only place left to go," says Ken Litchfield, a hobbyist collector and teacher at Merritt Community College in Oakland, Calif.

"If they would just open up all the parks to [mushroom] hunting, you wouldn't even notice us."