Accessibility links
These Days, School Lunch Hours Are More Like 15 Minutes : The Salt In a new poll, parents complain that their children are not getting nearly enough time for a basic school ritual: eating lunch. And that's worrying parents and administrators, given that about one-third of American kids are overweight or obese. 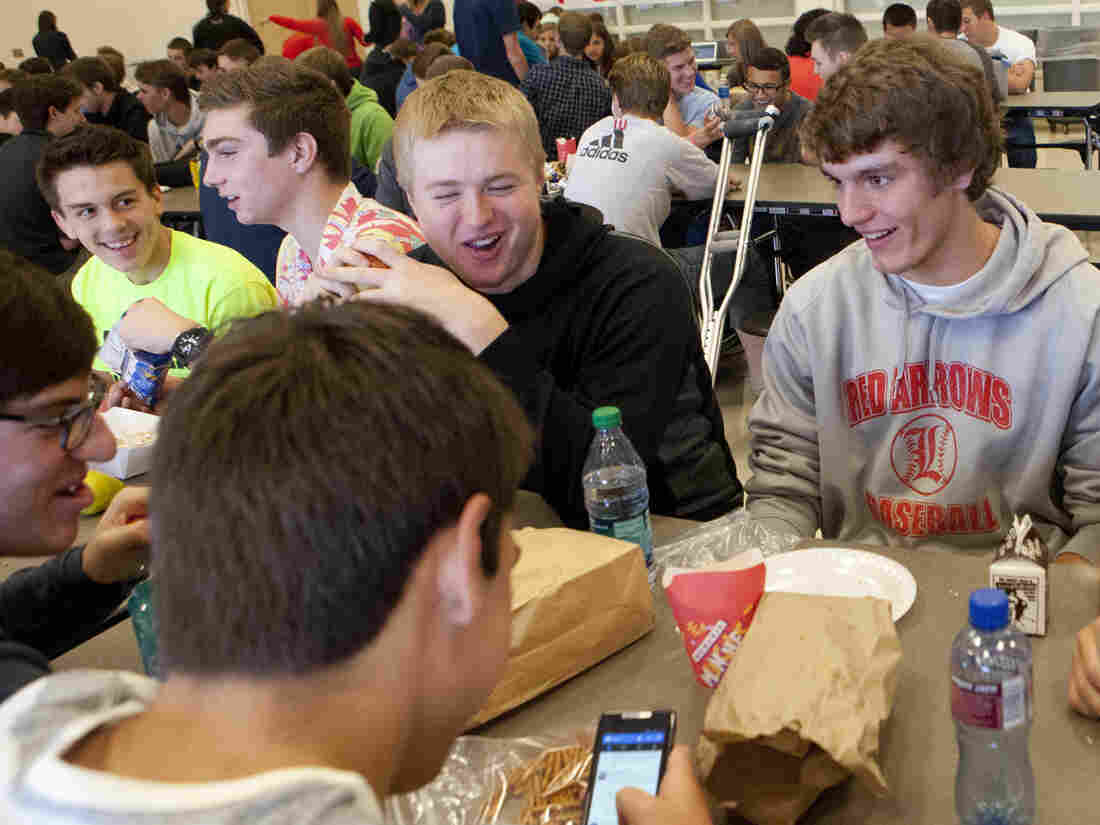 Students at Lowell High School in Michigan sit down for lunch. Shorter lunch breaks mean that many kids don't get enough time to eat and socialize. Emily Zoladz/Landov hide caption 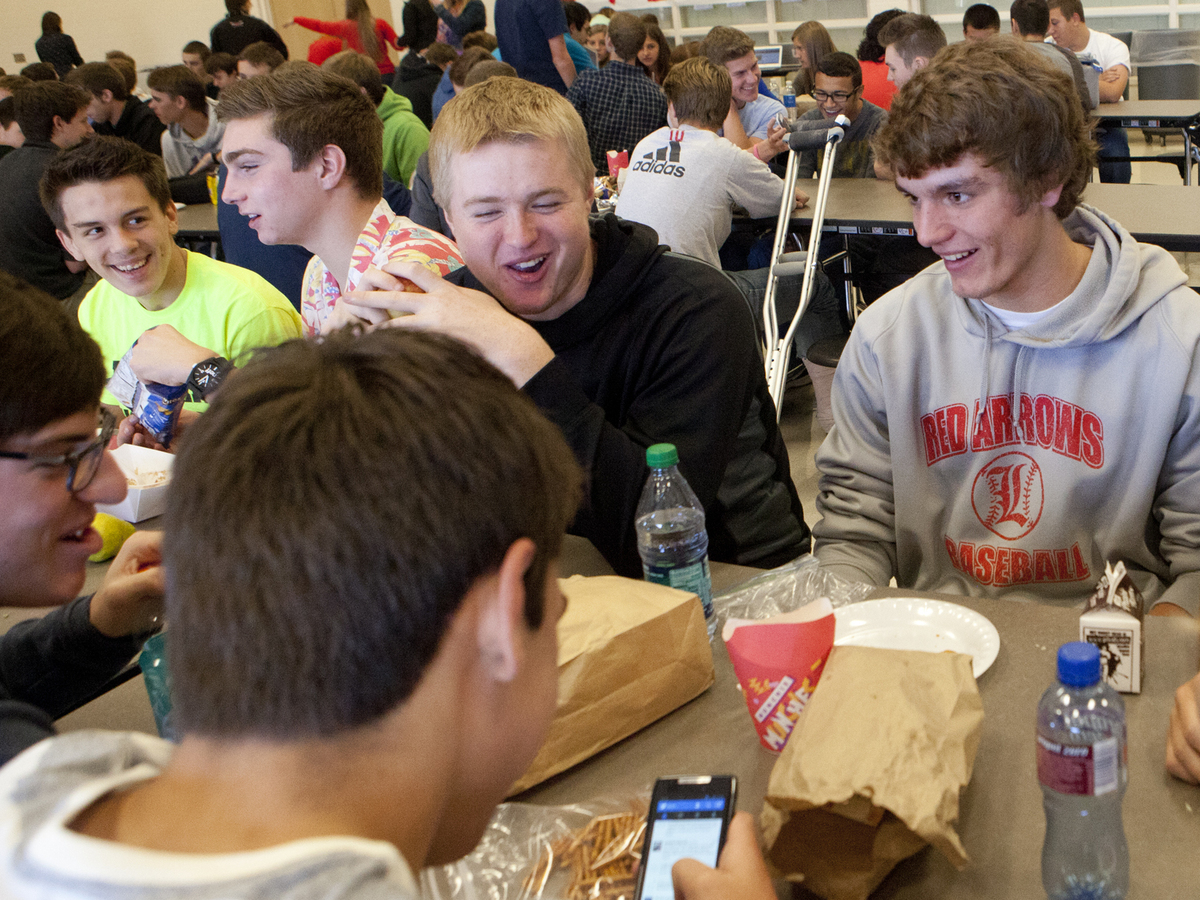 Students at Lowell High School in Michigan sit down for lunch. Shorter lunch breaks mean that many kids don't get enough time to eat and socialize.

In theory, anyway, Oakland High is a "closed campus." That's done in the interest of safety and security and to cut down on school-skipping. It means kids can't leave during school hours without parental consent, especially at lunchtime. But it doesn't stop several students from breaking out.

Inside the cafeteria the lines are long, and complaints about the food are as plentiful as the fence jumpers.

The food is dry and burned, says freshman Mary Thomas. "It's just nasty."

"I need more time because I eat slow and then, there's not enough free time," Moore says.

The school lunch hour in America is a long-gone relic. At many public schools today, kids are lucky to get more than 15 minutes to eat. Some get even less time.

And parents and administrators are concerned that a lack of time to eat is unhealthful, especially given that about one-third of American kids are overweight or obese.

The American Academy of Pediatrics recommends that students get at least 20 minutes for lunch. But that means 20 minutes to actually sit down and eat — excluding time waiting in line or walking from class to cafeteria.

At Oakland High, over 80 percent of the students qualify for free or reduced-price lunch. And officially, students get about 40 minutes for the meal. But Jennifer LeBarre, Oakland Unified School District's nutrition services director, admits that the actual table time is far shorter. At times it's just 10 minutes.

"I think it's a legitimate complaint that there's not enough time to eat," LeBarre says. "If we are being asked to eat our lunch in 10 minutes, that's not enough for us. So I really think we need to really work more for the 20-minute table time."

Oakland High is hardly alone. In a wide-ranging new poll by NPR, the Robert Wood Johnson Foundation and the Harvard School of Public Health, 20 percent of parents of students from kindergarten through fifth grade surveyed said their child only gets 15 minutes or less to eat.

Ironically, relatively new federal school-nutrition guideline changes may be making the situation worse. Under federal rules, schools have to increase the availability and consumption of fruits and vegetables — among other changes. It's part of an effort to improve nutrition and combat childhood obesity.

But eating more healthful foods can take more time, LeBarre says. "It's going to take longer to eat a salad than it will to eat french fries."

At many schools, lunch schedules aren't changing. Julia Bauscher, who is president of a national advocacy group called the School Nutrition Association, says administrators are under intense pressure to increase instruction time and boost standardized test scores. The lunch period is often the first place they look to steal time.

"[They've] got to get in this many instructional minutes, and this is our expected annual yearly progress on the test," she says. "You've got two important and competing priorities there."

Exacerbating the time crunch, nationally, is the reality that more students are taking part in the free or reduced-cost school lunch programs. Many schools are now adding free dinners as well under a new USDA dinner program launched this year. Bauscher is also the nutrition services director for Jefferson County Public Schools in Kentucky. She says in her area, 70 percent of the students are participating in meals programs — including free dinners for some.

"We've got a higher number of students eligible for free and reduced meals than ever. So as more of them take advantage of those programs, you get longer food lines," she says.

Some possible solutions — such as adding lunch periods, more food stations or service workers or lengthening lunchtimes — can be costly. And many budget-strapped schools today simply don't want to risk the added price.

Nicola Edwards of California Food Policy Advocates says parents need to be central to any solution. Parents can't effectively preach to kids about healthful food and quality lunchtime, she says, and then model grabbing something unhealthful on the go.

"Parents need to be modeling good eating behaviors, and not shoving food through the window in the back of the car as they're on their way to work or to school," Edwards says. "Part of helping people is really making them understand the importance of eating and taking the time to eat. "