Accessibility links
What Separates A Healthy And Unhealthy Diet? Just $1.50 Per Day : The Salt That difference translates to about $550 a year, according to a new meta-analysis of studies evaluating the retail costs of food, grouped by healthfulness. It's chump change for middle-class eaters, but a big gap for low-income families. Researchers say that's a problem that can be solved. 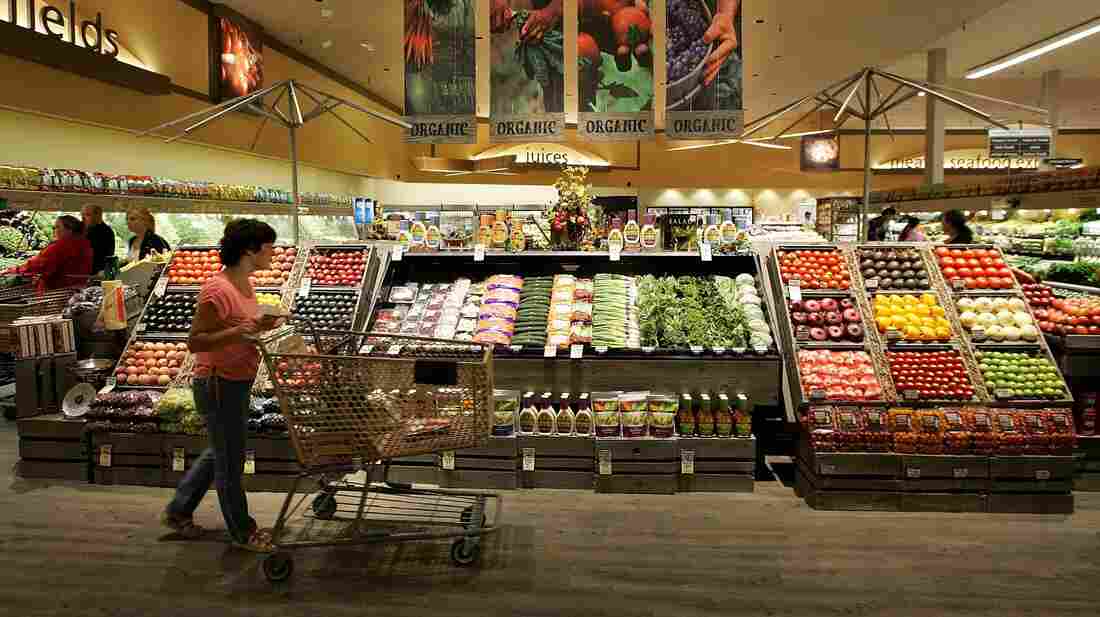 A Safeway customer browses in the fruit and vegetable section at Safeway in Livermore, Calif. Justin Sullivan/Getty Images hide caption

If you want to eat a more healthful diet, you're going to have to shell out more cash, right? (After all, Whole Foods didn't get the nickname "Whole Paycheck" for nothing.)

But until recently, that widely held bit of conventional wisdom hadn't really been assessed in a rigorous, systematic way, says Dr. Dariush Mozaffarian, a cardiologist and epidemiologist at the Harvard School of Public Health.

So he and his colleagues decided to pore over 27 studies from 10 different developed countries that looked at the retail prices of food grouped by healthfulness. Across these countries, it turns out, the cost difference between eating a healthful and unhealthful diet was pretty much the same: about $1.50 per day. And that price gap held true when they focused their research just on U.S. food prices, the researchers found in their meta-analysis of these studies.

"I think $1.50 a day is probably much less than some people expected," Mozaffarian tells The Salt, "but it's also a real barrier for some low-income families," for whom it would translate to about an extra $550 a year.

Still, from a policy perspective, he argues, $1.50 a day is chump change. "That's the cost of a cup of coffee," he says. "It's trivial compared to the cost of heart disease or diabetes, which is hundreds of billions of dollars" — both in terms of health care costs and lost productivity.

How To Make Healthy Eating Easier On The Wallet? Change The Calculation

"And so that relatively small difference," he says, "should really be an incentive for policymakers" to find ways to help low-income families bridge that extra $1.50 per day.

The researchers evaluated the cost of food by types of eating pattern — for example, a diet heavy on vegetables, nuts and fruits, like the Mediterranean diet, versus one rich in processed foods and meat. They also looked at price differences within specific food categories, such as grains, proteins, fats and dairy. The biggest price differences arose when it came to proteins/meats: Healthier, leaner cuts, they found, were on average about 29 cents more per serving. Only one of the studies included in the meta-analysis examined the cost of restaurant foods stratified by healthfulness — and that's definitely an area, the authors say, where more research is needed.

The research, published this week in the British Medical Journal Open, comes as House and Senate negotiators on Capitol Hill are debating a new farm bill — including billions of dollars in cuts to the federal food-assistance program formerly known as food stamps. It's now called the Supplemental Nutrition Assistance Program, or SNAP.

His group teaches low-income families who rely on food-assistance programs like SNAP how to navigate the supermarket to make better choices on a tight budget — tips like buying frozen and canned fruits and vegetables when fresh is too expensive, or teaching them how to cut up a whole chicken, which costs less than buying individual breasts, wings and other parts separately. Another key tip: When comparing two items, focus on the price per unit rather than the total price.

"We believe that education can help put healthy food in reach for many more families," Wachs tells The Salt. But subsidies for such education programs provided through SNAP could also be imperiled if the program's funding is cut, he says.

And even for those of us who aren't working under supertight budget constraints at the grocery store, the results of the meta-analysis are eye-opening, says Mozaffarian.

"Just as an excuse to not eat healthy," he says, "for most Americans, I think price is not an excuse."