Accessibility links
Fishery Closure Puts New England's Shrimp Season On Ice : The Salt After several years of declining shrimp stocks, regulators have imposed a moratorium on shrimping in New England waters. The closure could hurt commercial fisherman and future demand for the Gulf of Maine shrimp, but scientists say the move may be the only way to prevent the population from collapsing. 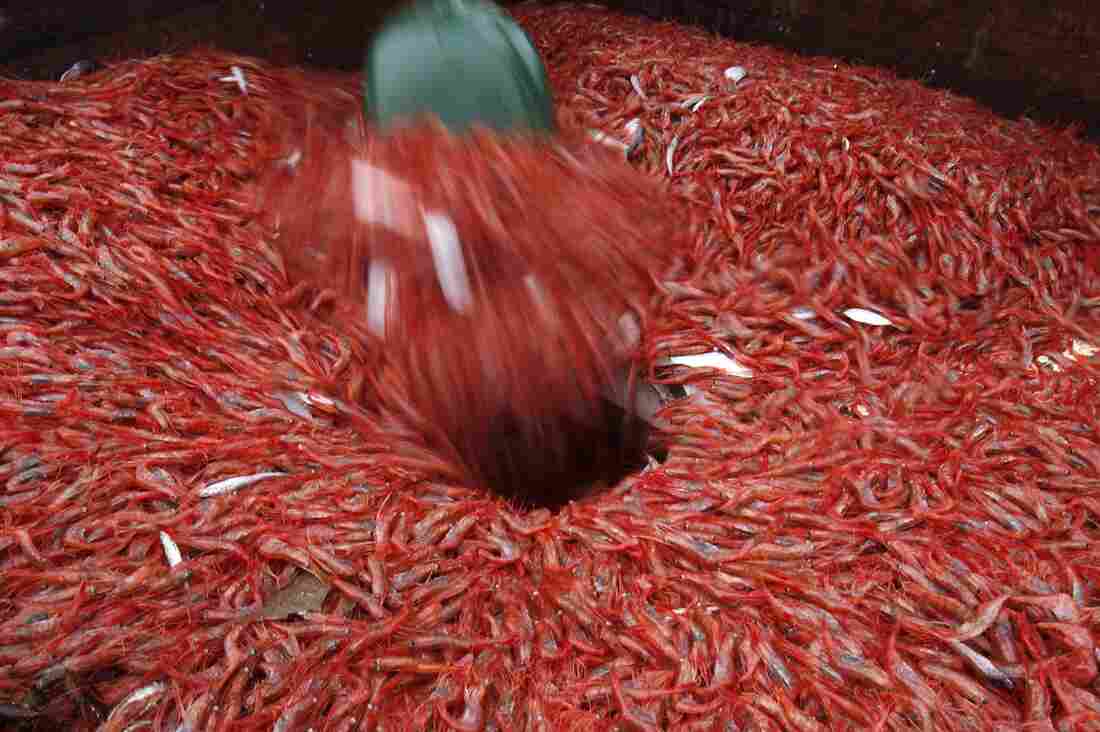 Northern shrimp are shoveled into a holding chamber on a trawler in the Gulf of Maine in 2012. Stocks of the shrimp have been declining for several years, leading regulators to cancel the New England shrimping season. Robert F. Bukaty/AP hide caption 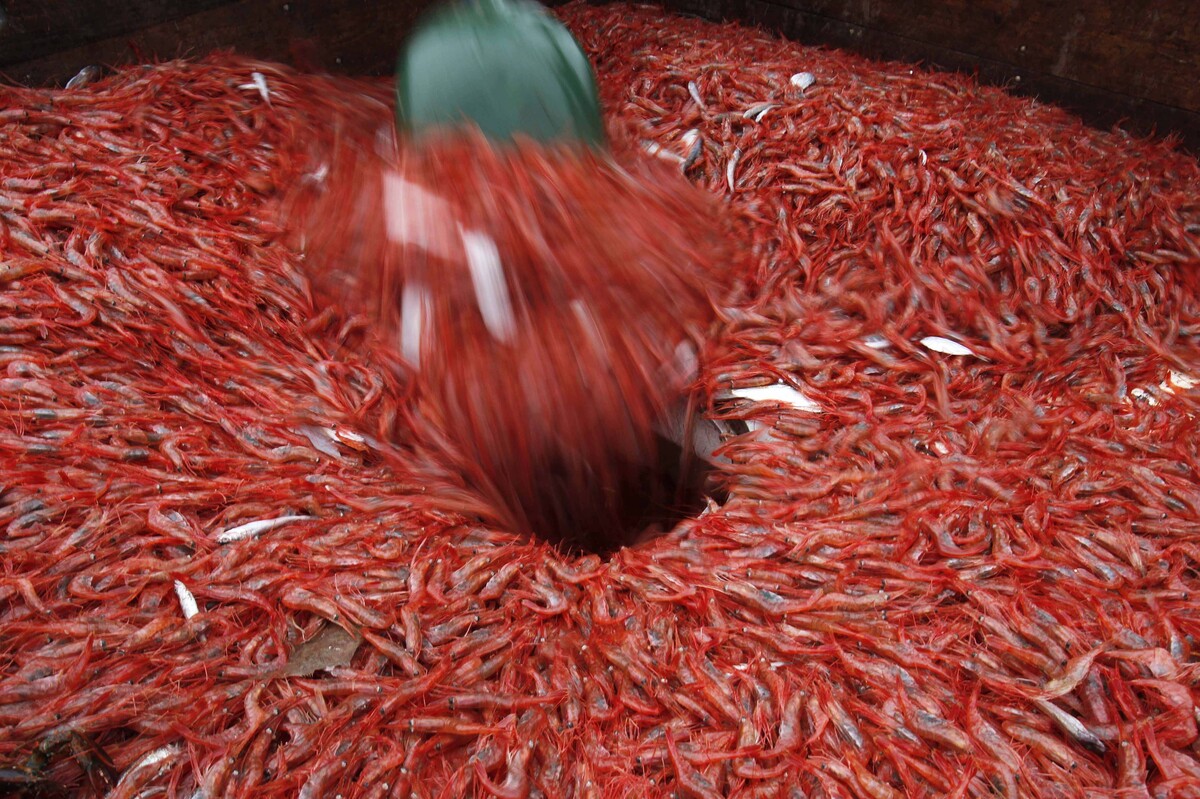 Northern shrimp are shoveled into a holding chamber on a trawler in the Gulf of Maine in 2012. Stocks of the shrimp have been declining for several years, leading regulators to cancel the New England shrimping season.

New England chefs like Andrew Taylor and Mike Wiley are still coming to terms with the news: No more shrimp until further notice.

This week, regulators shut down the New England fishery for Gulf of Maine shrimp for the first time in 35 years. The Atlantic States Marine Fisheries Commission judged the stocks of the popular shrimp, also known as northern shrimp, to be dangerously low.

"Shrimp is just one of those treasures in the winter of Maine," says Taylor, who co-owns the upscale Hugo's Restaurant in downtown Portland with Wiley. The restaurant sits just yards from the city's working waterfront and the two pride themselves on serving fresh, local seafood. 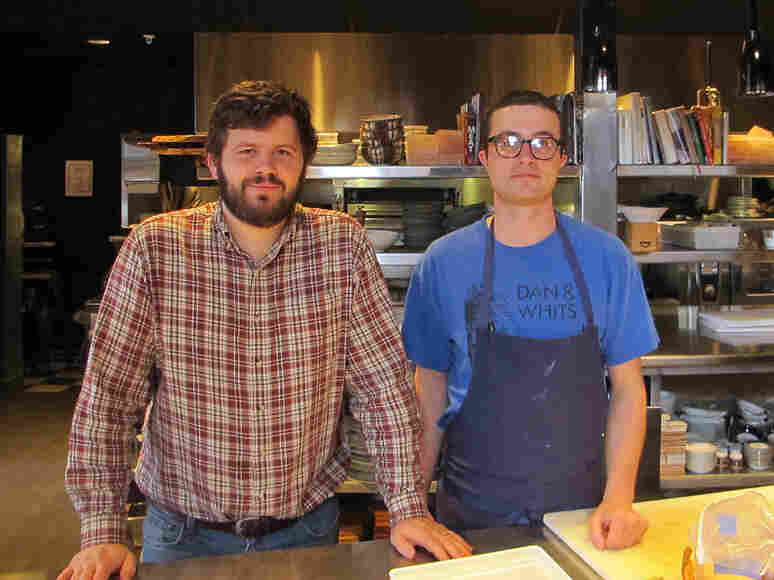 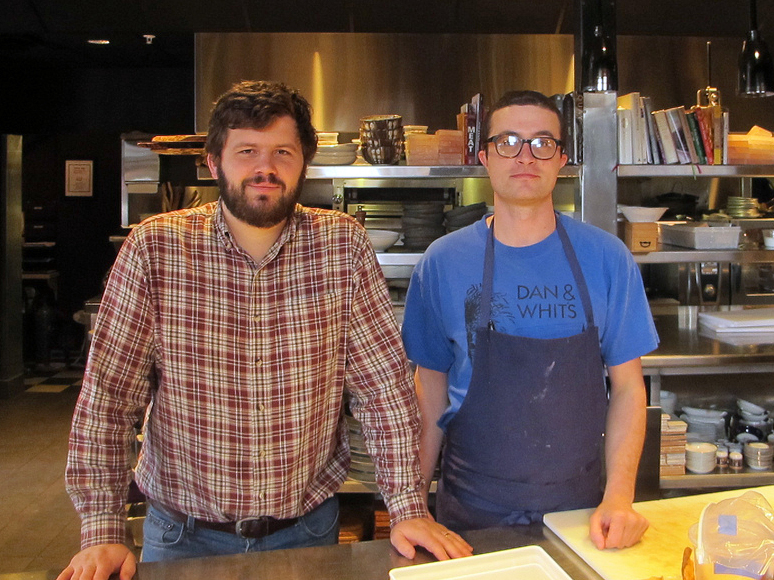 Chefs Andrew Taylor, left, and Mike Wiley, co-owners of two Portland, Maine, restaurants, say the moratorium is worth it if it helps sustain the shrimp population.

Maine shrimp normally hit the menu in January or February. They may not be big — they're about an inch-and-a-half long — but Taylor says they're full of flavor.

"You see them on other menus as 'bay shrimp,' and they're the tiny little tails that come in all those salads," he says. "A lot of those are provided by the state of Maine. They're used frozen all over the country and all over the world."

Wiley says shrimp will be sorely missed this winter, but he understands the rationale behind the moratorium.

"It means one less exciting local product to work with, but we'd like to see Maine shrimp on menus 10 years from now more than we need to have it on the menu for this upcoming year," Wiley says.

The Gulf of Maine shrimp stock "is in the poorest condition that we've seen it," says marine biologist Kelly Whitmore, who leads the technical committee that recommended the fishery's closure.

Warmer oceans and the changing environment definitely play a part, she says, but so does overfishing. There have been too few young shrimp coming through the waters to rebuild the population — a phenomenon known as recruitment failure — for three years in a row, Whitmore explains. She says that's unprecedented.

Fishery experts, industry officials and many fishermen say there's a strong likelihood that regulators will vote to keep the fishery closed for at least two more years.

Maxing Out The Mini Season For Maine Shrimp

Gary Libby, a commercial fisherman, says it's the worst situation he's known since he got into the business nearly 35 years ago, just after the last closure. This time around things are much worse, he says.

"We're looking at an anomaly that we haven't seen before, so what they did was warranted," Libby says of the closure.

But not everyone thinks the complete closure was justified. Spencer Fuller, a manager for Cozy Harbor Seafood, which processes and ships Maine products across the globe, says some shrimping should have been allowed to continue — albeit with much-reduced quotas.

"We've been able to establish ourselves in major retailers in Europe," Fuller says. Just three years ago, he explains, Cozy Harbor was shipping thousands of metric tons of Gulf of Maine shrimp, much of it ending up on the shelves of markets in places like the United Kingdom, Sweden and Denmark.

With no more shrimp, Fuller says a crucial toehold in overseas markets will be lost. "It's very difficult, one, to get that shelf space, two, to hold it — but even more difficult to get it back again."

The only way to get that presence back when the fishery recovers, he says, will be to significantly lower the price.