Accessibility links
Elevenses And Then Some: How To Prepare A Feast Fit For A Hobbit : The Salt The latest installment in the Hobbit movie trilogy opens this week. And some hard-core fans plan to celebrate not just with a marathon screening of the Lord of The Ring films that came before it, but with a full day of feasting — seven meals, hobbit-style. We offer up a sample menu.

Elevenses And Then Some: How To Prepare A Feast Fit For A Hobbit

Elevenses And Then Some: How To Prepare A Feast Fit For A Hobbit 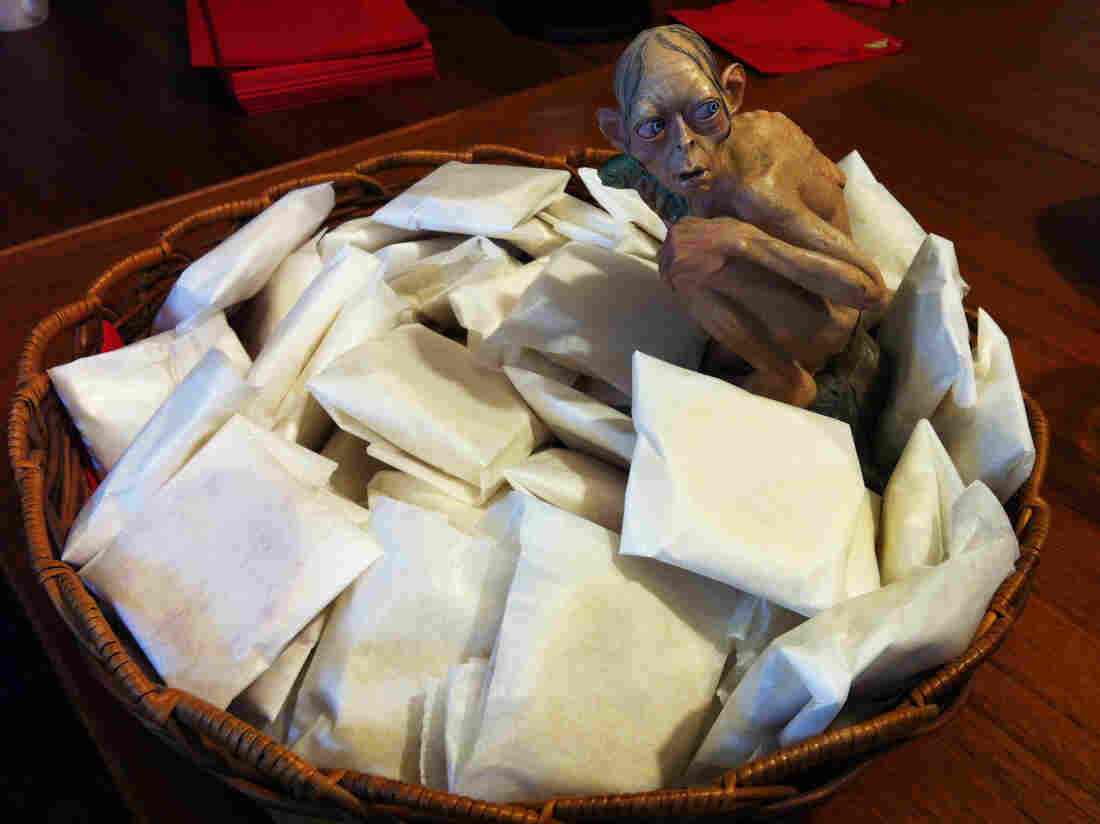 Precious snack: In Tolkien's books, lembas was a special bread made by elves that could stay fresh for months — perfect for sustaining travelers on a long journey (or engaging in an all-day movie marathon.) Try it for elevenses. Beth Accomando for NPR hide caption 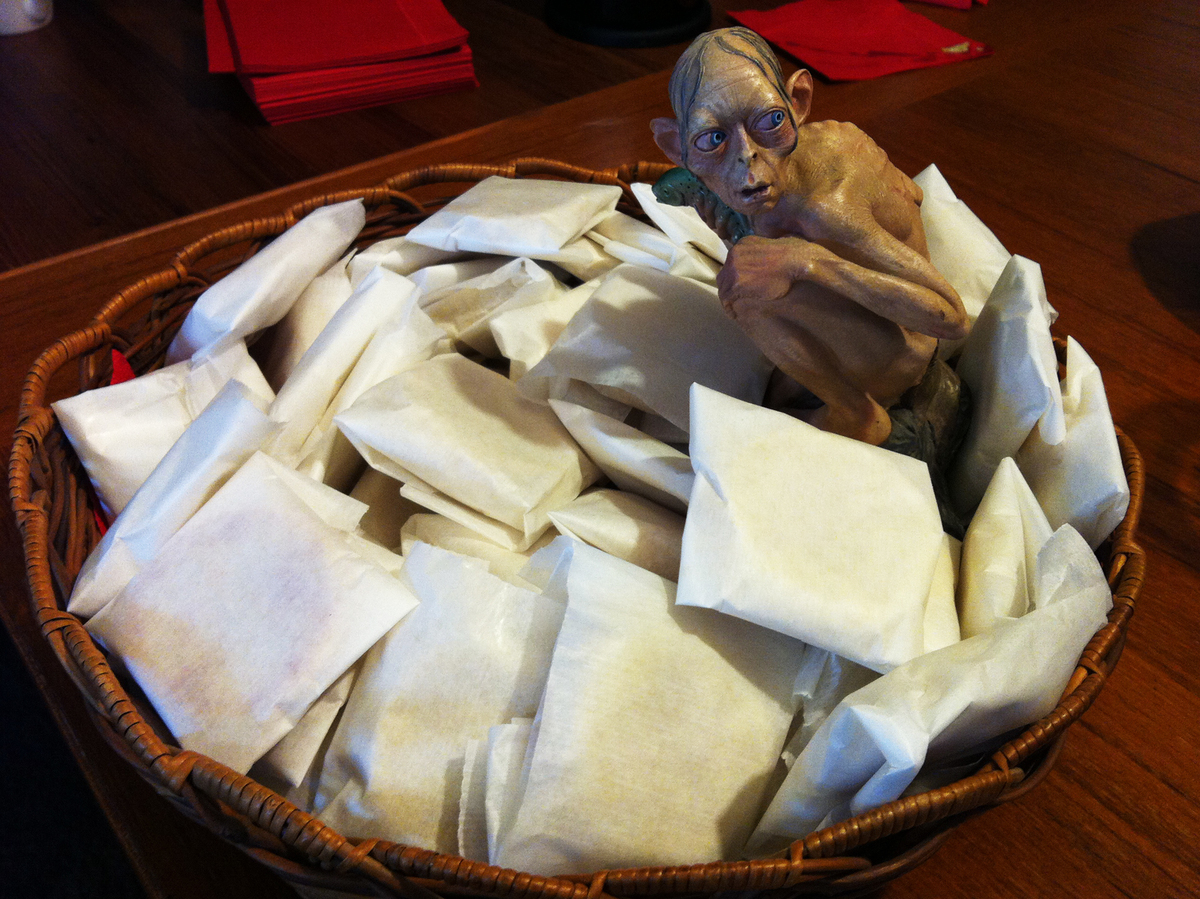 Precious snack: In Tolkien's books, lembas was a special bread made by elves that could stay fresh for months — perfect for sustaining travelers on a long journey (or engaging in an all-day movie marathon.) Try it for elevenses.

"If more of us valued food and cheer and song above hoarded gold, it would be a merrier world." — J.R.R. Tolkien

Each year, I swear I will never do this again.

And yet, for the third year in a row, I am preparing to host a day-long Lord of the Rings movie marathon – and cooking up a seven-course hobbit-themed feast, plus dessert, to serve my guests. Maybe it's because, like Tolkien, I too would like the world to be a merrier place.

This week's repast will help me and my fellow fans ready ourselves for the release of the new movie The Hobbit: The Desolation of Smaug, opening Dec. 13. If you're familiar with either J.R.R. Tolkien's novels or Peter Jackson's film adaptations, then you know how important food is to hobbits.

In The Fellowship of the Ring, the hobbits Merry and Pippin fret that Aragorn, the human ranger who has joined their expedition, doesn't know about – and won't make time for — second breakfast, or elevenses, luncheon, afternoon tea, dinner, and supper.

Purists will note that Tolkien only wrote of six meals. (Jackson's films added the seventh). But since my hobbit meals are eaten during movie viewings, I keep to the films' seven-meal menu — and add in dessert.

Judging from Tolkien's writing alone, one would think the man was an epicure of, well, epic scale. He did, after all, pen the line, "When he heard there was nothing to eat, he sat down and wept." And he chose to begin both The Hobbit and The Fellowship of the Ring with food-filled parties — the first an unexpected dinner for dwarves, the second a grand birthday feast for Bilbo.

And so it's not surprising that for some fans of Middle-earth, myself included, food has become another bridge into the world that Tolkien so masterfully created.

If you are putting together a hobbit homage menu, there are many sites offering inspiration. One site, from Warner Brothers, allows fans to submit and rate recipes. Another, from Strange Horizons, offers a detailed exploration of food in Tolkien's novels. 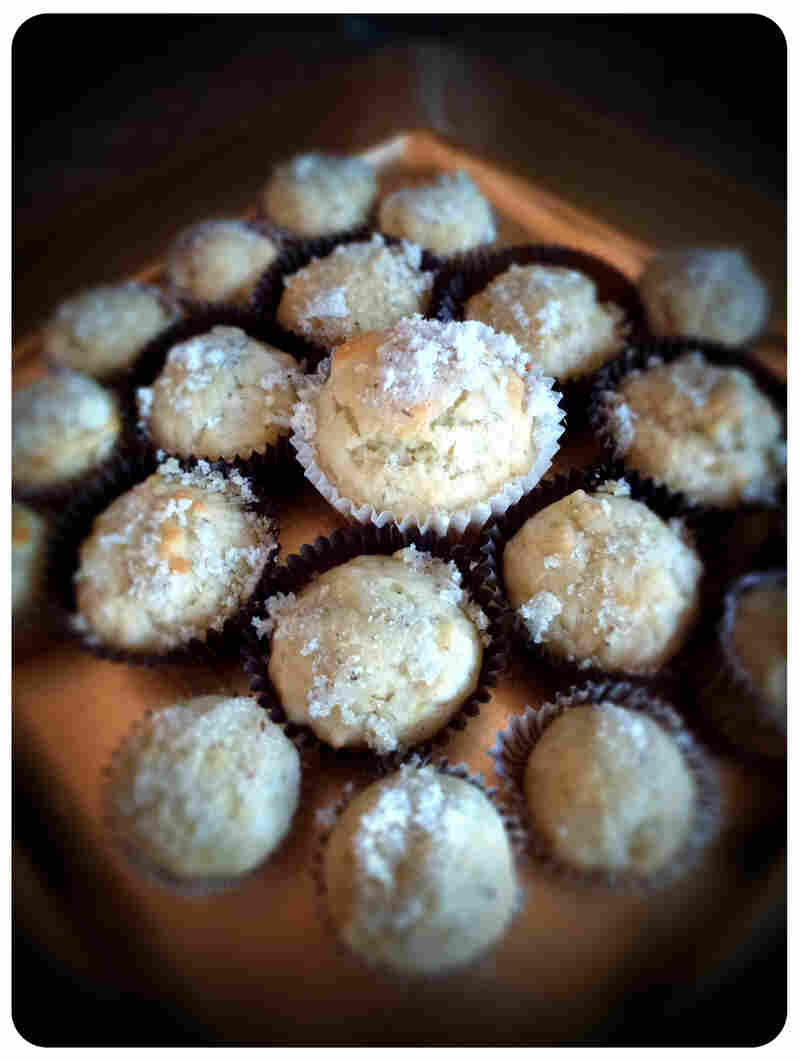 These lavender and lemon muffins smell heavenly and will draw hobbits to the table for afternoon tea. Beth Accomando for NPR hide caption

But hands down, the best place I've found for recipes that are both tasty and feel authentic to the hobbit world is Middle-earth Recipes. It features contributions by the Fellowship of Middle-Earth, an online fan community.

"The recipes on our site were designed by lovers of the books who tried to recreate the specialties that are described in the book," says "Doctor Gamgee" — in real life he is Dr. Joseph Crabtree, a voice instructor from Laredo, Texas, who helps oversee the site.

"Lembas" – a special bread made by elves that could stay fresh for months – "would be a good example of one that was a favorite, 'wonder-what-I-would-take' creative sort of fare," he says.

Such efforts, he says, are "love for the books being created in food."

I love these recipes because they obviously come from fans, and you can find footnotes like this: "Okay, maybe hobbits didn't have such an exotic Southern fruit as bananas — let's just say a travelling fruit-salesman from Far Harad came through."

Based on my experience hosting hobbit-themed feasts, and marathon movie viewings, here are a few tips.

By the end of the day, you will have newfound respect for hobbits and their seemingly bottomless ability to graze.

If you're looking for some inspiration, scroll down to find the menu I used for my hobbit feast last year.

As for what libations to serve? My friend Jim Crute, the head brewer at Poway Lightning Brewery in San Diego and a past attendee of my hobbit feast, has a suggestion:

"Hobbits would only drink ales, since lagers are not found on Middle-earth."

Note: All of these recipes are from Middle-earth Recipes. I've provided links and noted here where I've made tweaks to the original. 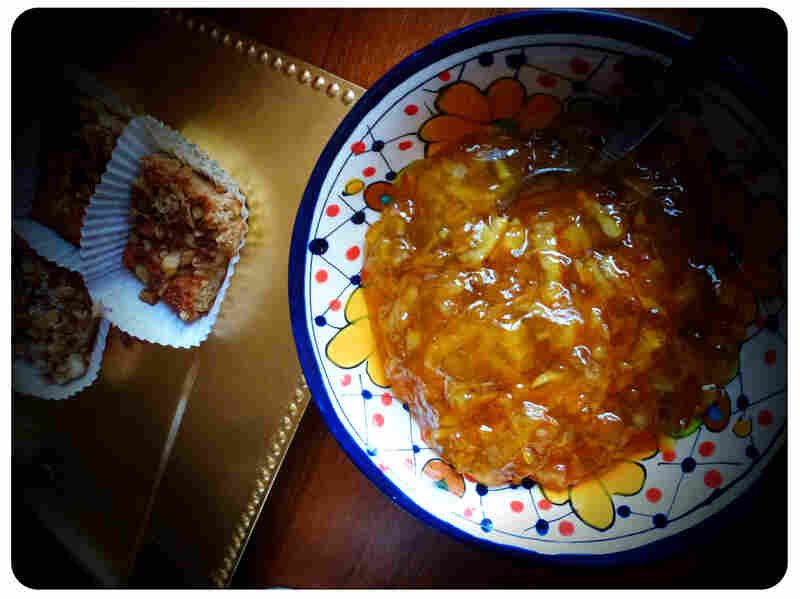 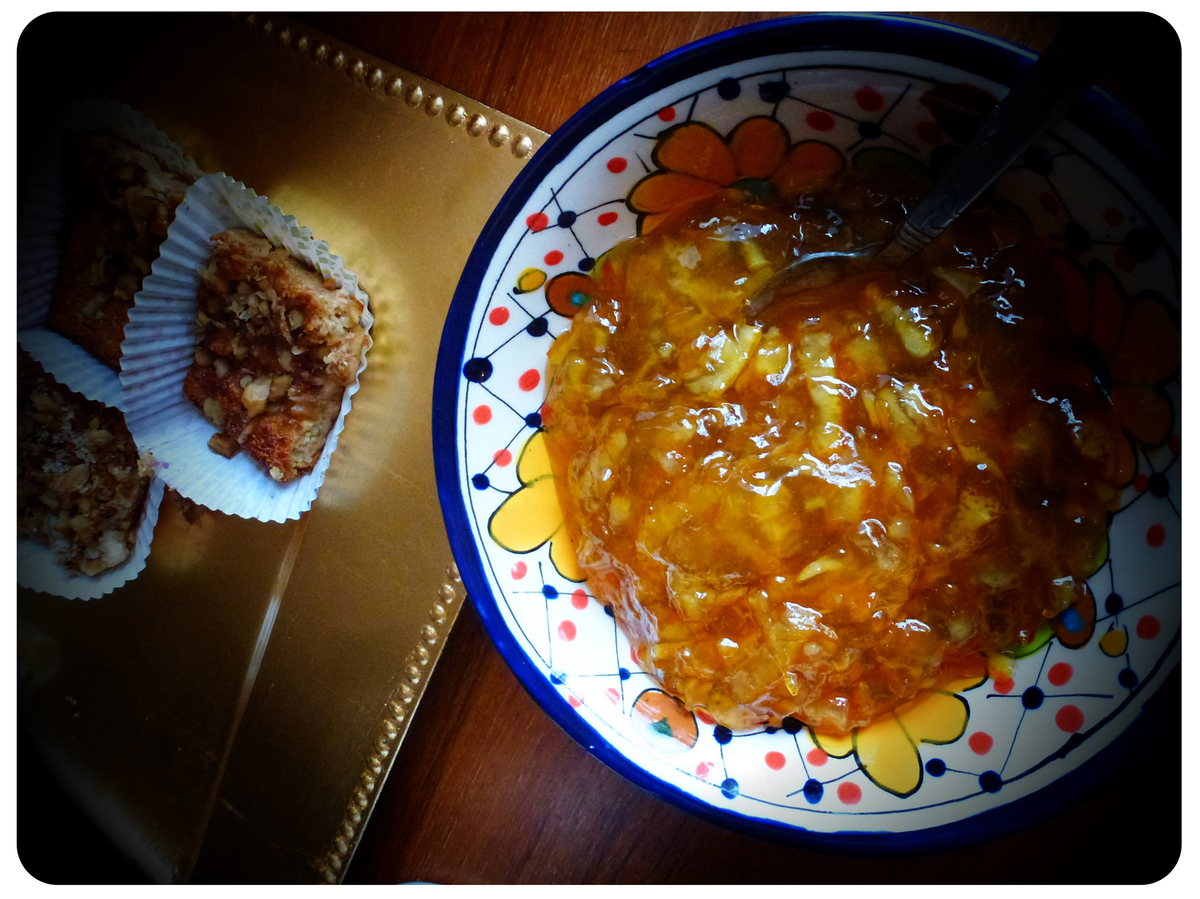 A sweet way to start your hobbits off. Start light and simple to ease into the 14 hours of food.

Strawberry and Banana French Toast with Sausage and Bacon

My tweak to this recipe is to add cinnamon, vanilla and maple syrup to the eggs and soak the bread overnight before cooking. And always serve with meat — sausage or bacon. Or preferably both.

There are multiple recipes for lembas bread (one bite is meant to sustain a man for a day) online, and two are available at Middle-earth Recipes. Elves keep this recipe secret, so you can't be sure which recipe is most authentic. The tricky part is finding fresh, clean Mallorn leaves to wrap them in. In a pinch, you can wrap them in parchment paper or banana leaves from the Asian market or make your own. Do not confuse lembas bread with cram, which is similarly good for long journeys but is "more of a chewing exercise," according to Tolkien.

For an adult party, feel free to spike the mulled cider with some Irish whiskey. Again, this is a nice light but sustaining food break.

I added a whole head of roasted garlic to this recipe and served it with toasted bread topped with Gruyere or Irish white cheddar cheese. 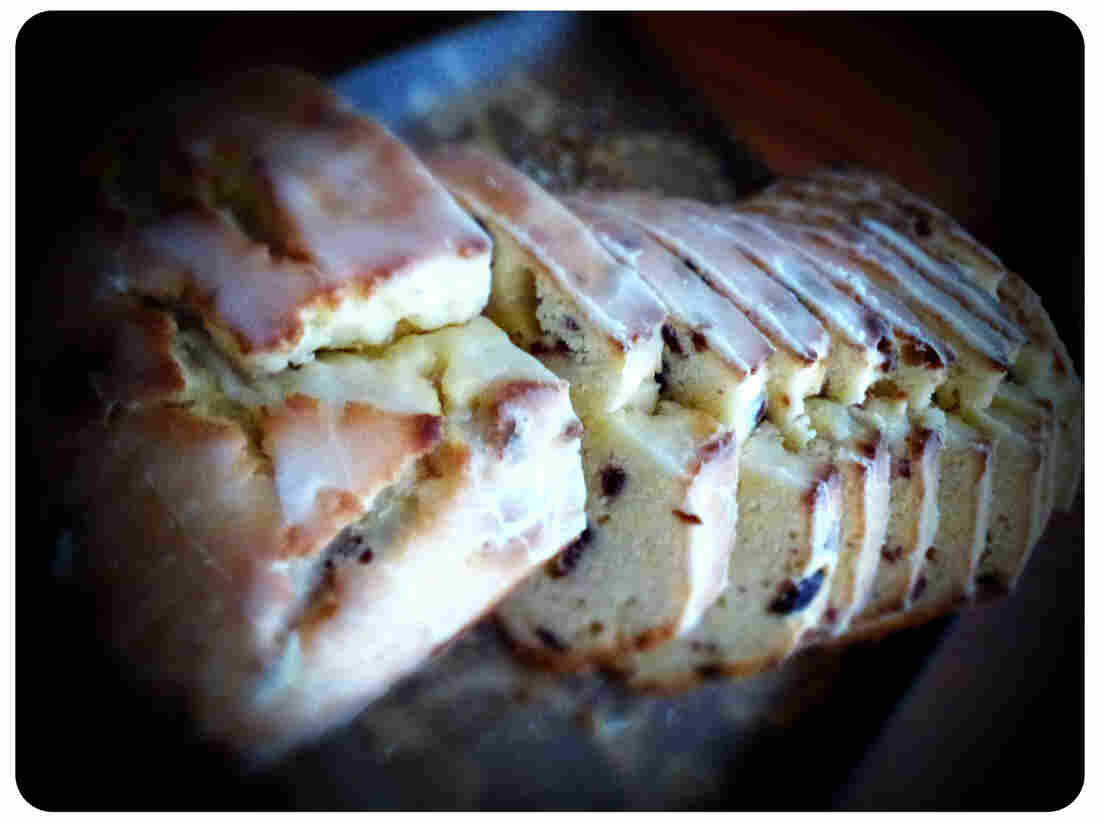 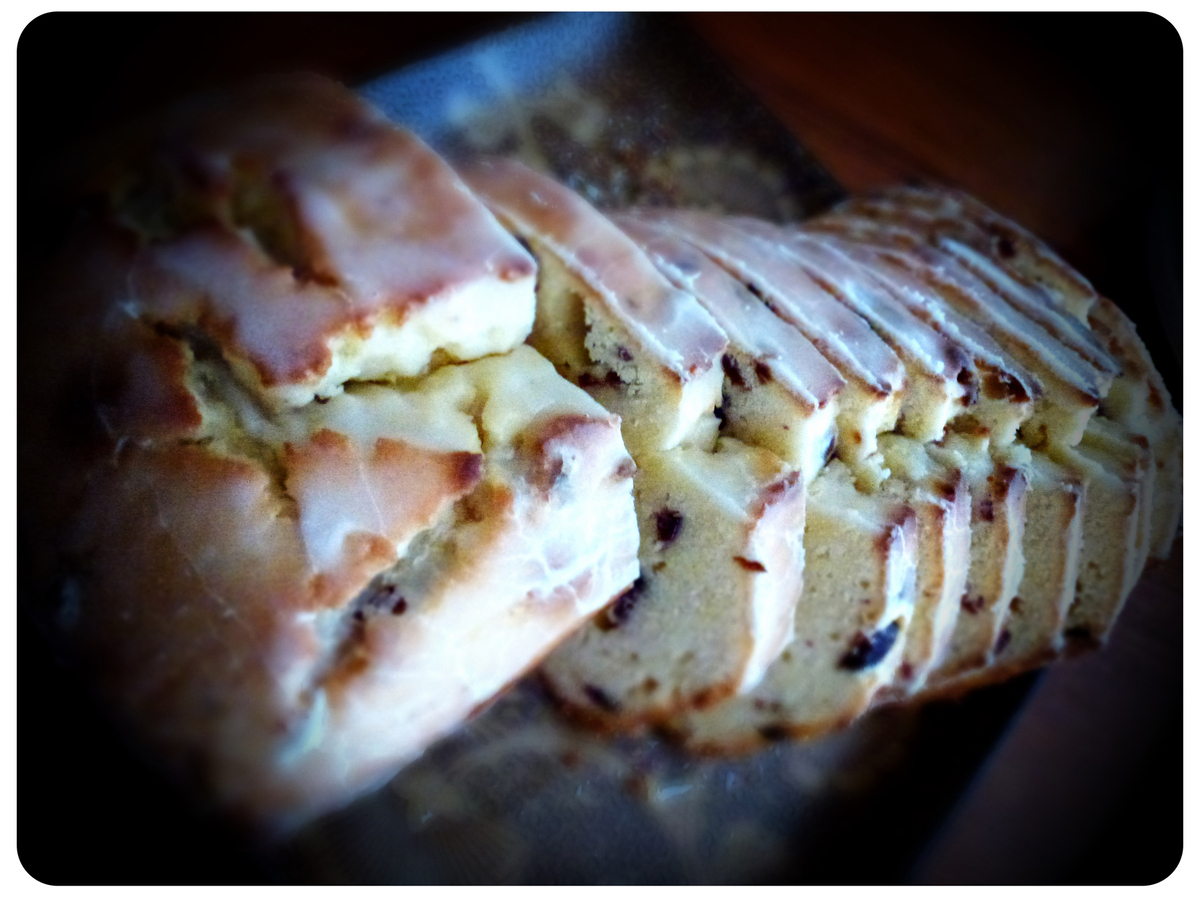 I definitely prefer the lemon zest and lemon for the tea cake, and frost it with a simple confectioners' sugar and lemon juice glaze. The lavender and lemon muffins smell heavenly and will draw hobbits to the table. 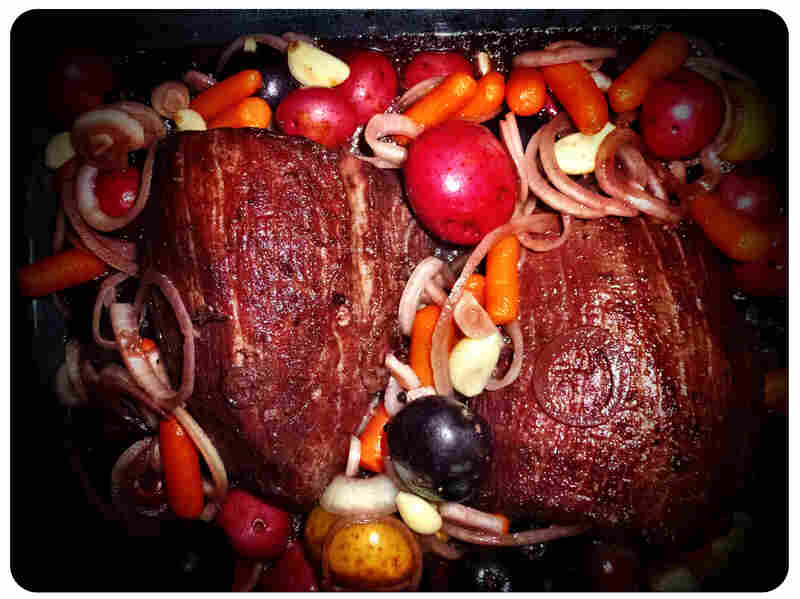 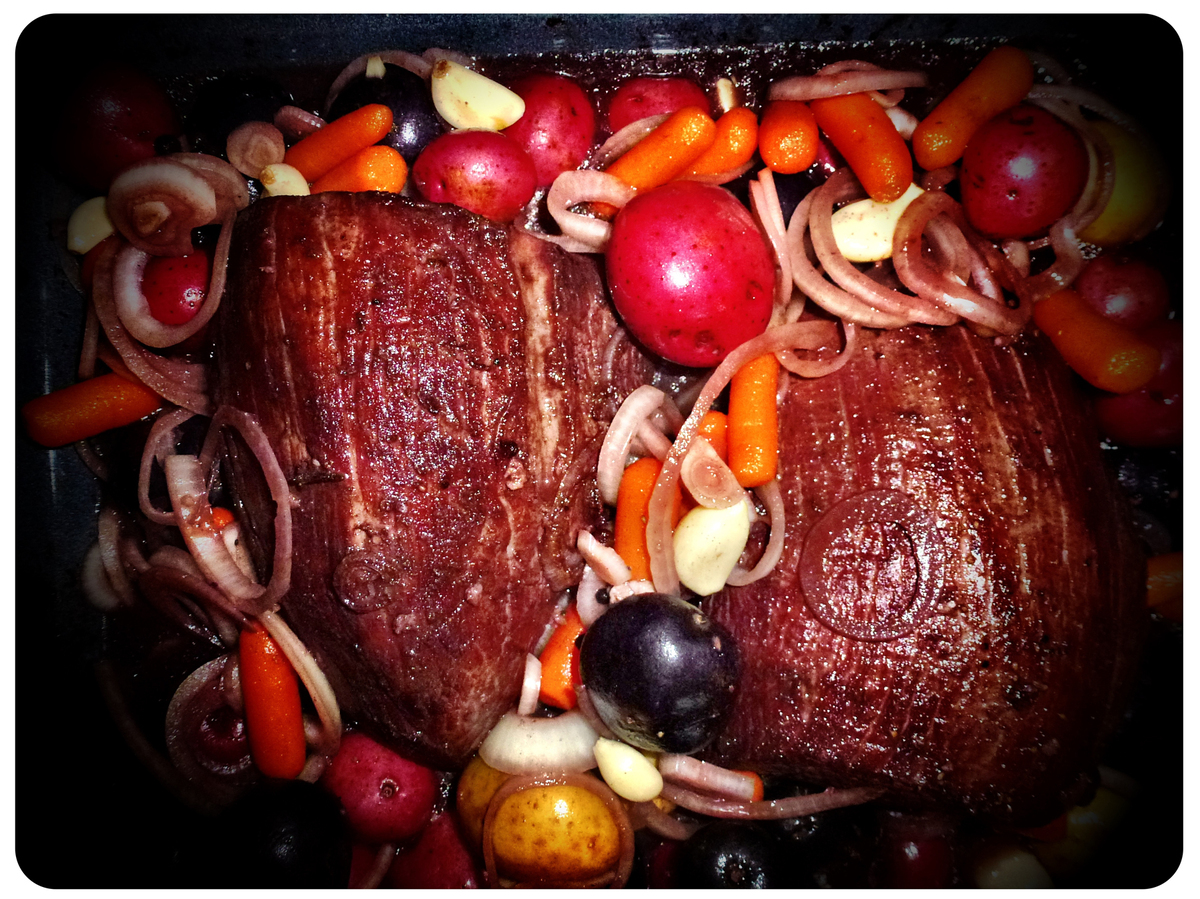 Heading into the home stretch now. Be aware that Balin's Spiced Beef needs to marinate for 12 hours, but once you prep it, you can forget about it till it needs to go in the oven. Add vegetables to the pan while it bakes for a heartier dish.

Here's my variation on Mrs. Maggot's Cottage Pie, since I need to make two large pans of this to feed my hungry hobbits. Cook the following in bacon fat and set aside: 2 celery stalks, 4 carrots, 2 onions, 1 can of peas. For the mashed potato topping: one five-pound bag of Klondike potatoes, steamed and mashed with 1 cup butter, 1 cup heavy cream, salt, white pepper, and infused with crushed garlic. Four pounds ground meat cooked and drained, and then mixed with 1 1/2 cups broth, a few dashes of Worchestershire sauce, salt, pepper, sweet paprika, thyme, nutmeg, one small can tomato sauce, sherry, parsley, and 1/2 cup cream. Combine everything but potatoes and place in two 9x13 glass pans and top with mashed potatoes and lots of butter.

I love this recipe in part because of how it is described by its contributor, Ashlyn: "for Rangers in the field who only have one measuring cup with them." I omit raisins and increase the amount of chocolate chips and nuts.