Accessibility links
Chowing Down On Meat, Dairy Alters Gut Bacteria A Lot, And Quickly : The Salt Shifting to a diet that's packed with pork, cheese and eggs has a big influence on the trillion of bacteria living in our guts, even after just a few days, new research shows. 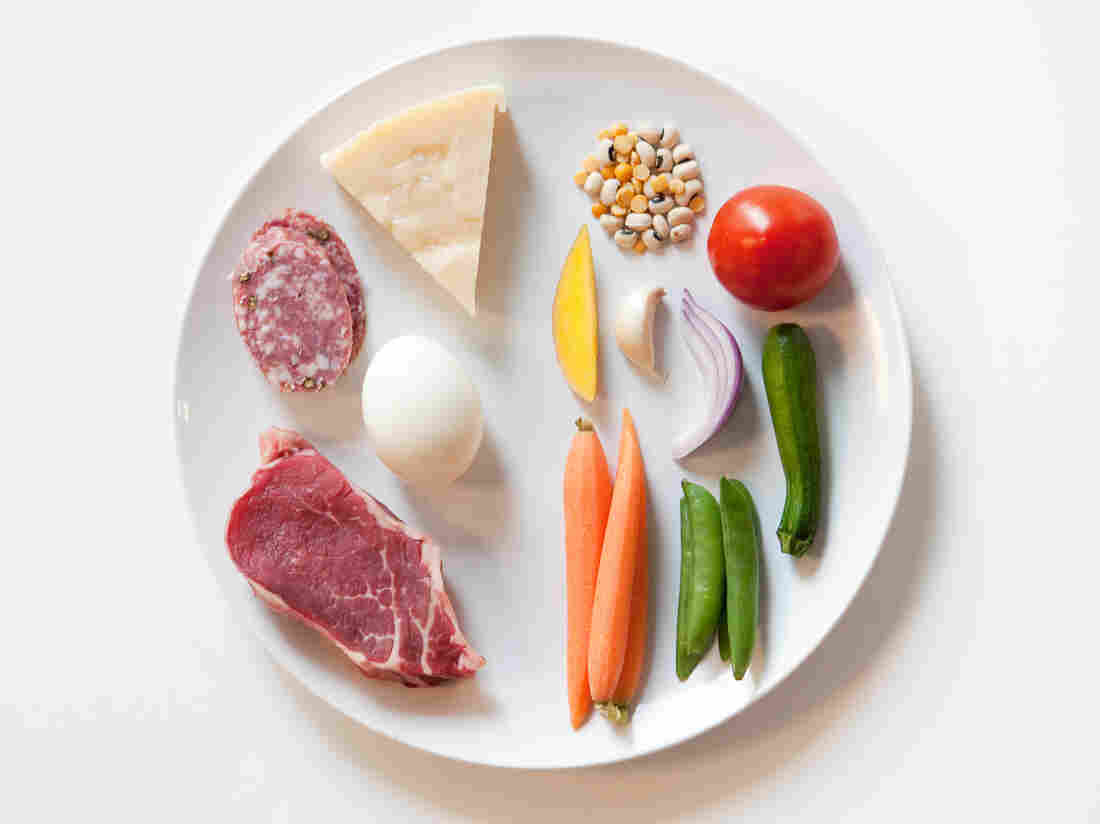 To figure out how diet influences the microbiome, scientists put volunteers on two extreme diets: one that included only meat, egg and cheese and one that contained only grains, vegetables and legumes. Morgan Walker/NPR hide caption 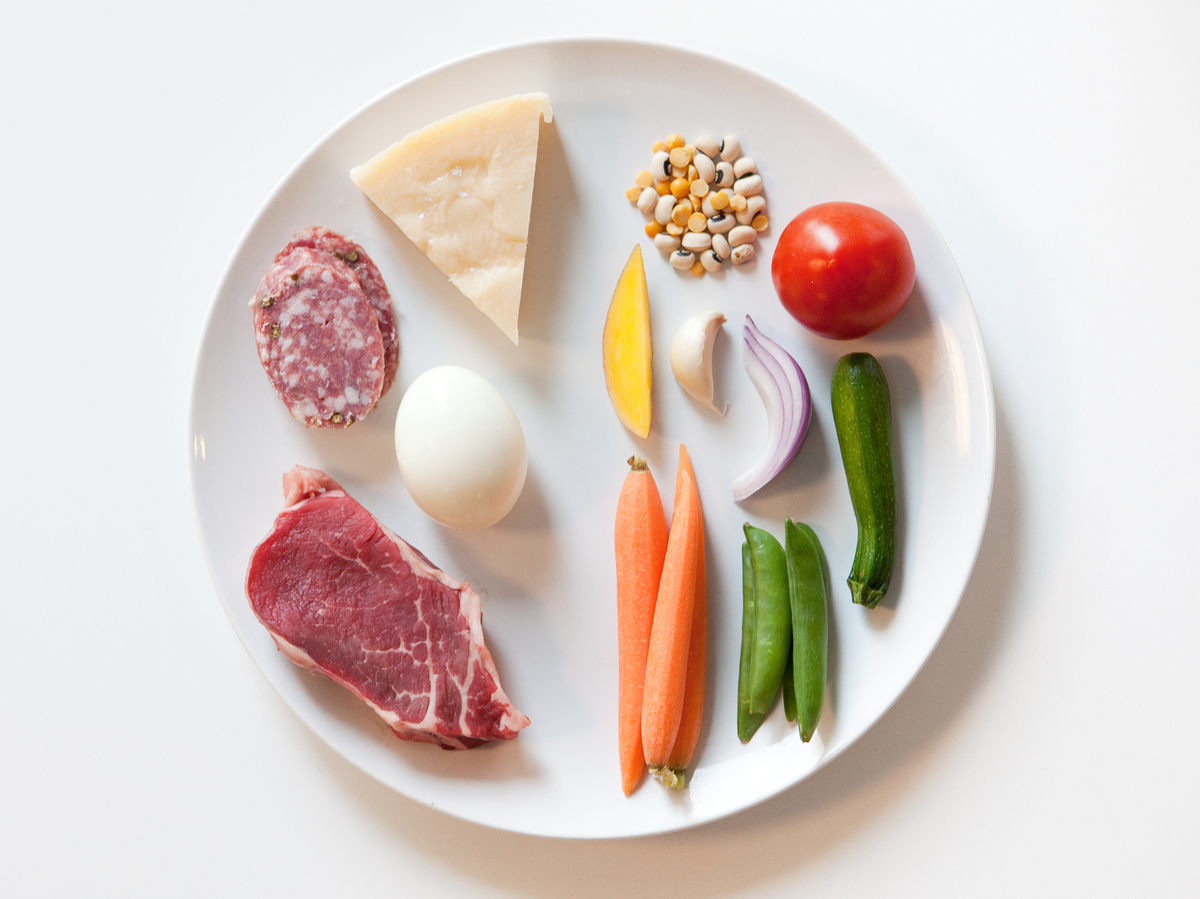 To figure out how diet influences the microbiome, scientists put volunteers on two extreme diets: one that included only meat, egg and cheese and one that contained only grains, vegetables and legumes.

Looks like Harvard University scientists have given us another reason to walk past the cheese platter at holiday parties and reach for the carrot sticks instead: Your gut bacteria will thank you.

Switching to a diet packed with meat and cheese — and very few carbohydrates — alters the trillions of microbes living in the gut, scientists report Wednesday in the journal Nature.

The change happens quickly. Within two days, the types of microbes thriving in the gut shuffle around. And there are signs that some of these shifts might not be so good for your gut: One type of bacterium that flourishes under the meat-rich diet has been linked to inflammation and intestinal diseases in mice.

"I mean, I love meat," says microbiologist Lawrence David, who contributed to the study and is now at Duke University.

"But I will say that I definitely feel a lot more guilty ordering a hamburger ... since doing this work," he says.

Scientists are just beginning to learn about how our decisions at the dinner table — or the drive-through — tweak our microbiome, that is, the communities of bacteria living in our bodies. But one thing is becoming clear: The critters hanging out in our intestine influence many aspects of our health, including weight, immunity and perhaps even behavior.

And interest in studying the links between diet and the human microbiome is growing. Previous research in this field had turned up tantalizing evidence that eating fiber can alter the composition of gut bacteria. But these studies had looked at diets over long periods of times — months and even years. David and his colleagues wanted to know whether fiber — or lack of it — could alter gut bacteria more rapidly.

To figure that out, the researchers got nine volunteers to go on two extreme diets for five days each.

The first diet was all about meat and cheese. "Breakfast was eggs and bacon," David says. "Lunch was ribs and briskets, and then for dinner, it was salami and prosciutto with an assortment of cheeses. The volunteers had pork rinds for snacks."

Then, after a break, the nine volunteers began a second, fiber-rich diet at the other end of the spectrum: It all came from plants. "Breakfast was granola cereal," David says. "For lunch, it was jasmine rice, cooked onions, tomatoes, squash, garlic, peas and lentils." Dinner looked similar, and the volunteers could snack on bananas and mangoes.

"The animal-based diet is admittedly a little extreme," he says. "But the plant-based diet is one you might find in a developing country."

David and the team analyzed the volunteers' microbiomes before, during and after each diet. And the effects of all that meat and cheese were immediately apparent.

"The relative abundance of various bacteria species looked like it shifted within a day after the food hit the gut," David says. After the volunteers had spent about three days on each diet, the bacteria in the gut even started to change their behavior. "The kind of genes turned on in the microbes changed in both diets," he says.

In particular, microbes that "love bile" — the Bilophila — started to dominate the volunteers' guts during the animal-based diet. Bile helps the stomach digest fats. So people make more bile when their diet is rich in meat and dairy fats.

A study last year found that blooms of Bilophila cause inflammation and colitis in mice. "But we didn't measure levels of inflammation in our subjects," David says. "That's the next step."

Instead, he says, his team's data support the overall animal model that Bilophila promotes inflammation, which could ultimately be controlled by diet.

"Our study is a proof of concept that you can modify the microbiome through diet," David says. "But we're still a long ways off from being able to manipulate the community in any kind of way that an engineer would be pleased about."

Even just classifying Bilophila as "bad bacteria" is a tricky matter, says Dr. Purna Kashyap, a gastroenterologist at the Mayo Clinic in Minnesota.

"These bacteria are members of a community that have lived in harmony with us for thousands of years," says Kashyap, who wasn't involved in the study. "You can't just pick out one member of this whole team and say it's bad. Most bacteria in the gut are here for our benefit, but given the right environment, they can turn on us and cause disease."

Nevertheless, Kashyap thinks the Nature study is exciting because the findings unlock a potentially new avenue for treating intestinal diseases. "We want to look at diet as a way of treating patients," Kashyap says. "This study shows that short-term dietary interventions can change microbial composition and function."

Of course, figuring out exactly how to do that will take much more research.

"The paper has made the next leap in the field," Kashyap says. "With discovery comes responsibility. Once you make this big finding, it needs to be tested appropriately."