Accessibility links
Drug Companies Accept FDA Plan To Phase Out Some Animal Antibiotic Uses : The Salt The Food and Drug Administration Wednesday advised companies to change the labels on their drugs to make it illegal for livestock producers to use drugs for "growth promotion" or "feed efficiency." The announcement is the latest step in a long-running effort by the FDA to reduce the use of antibiotics in agriculture. 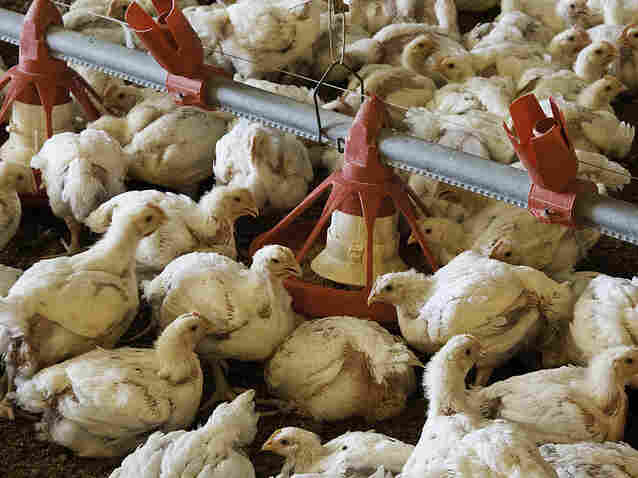 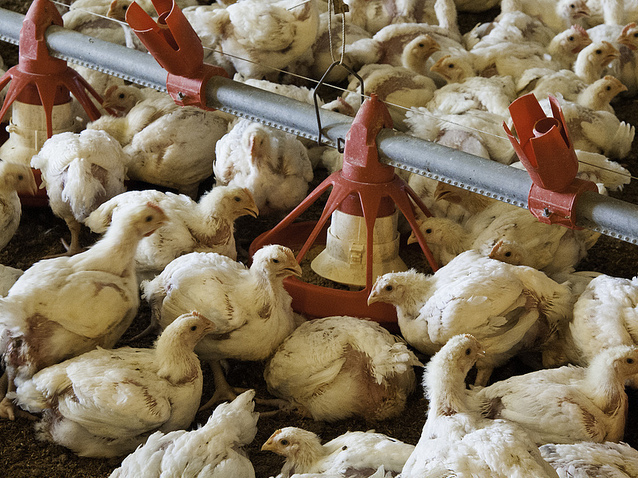 Young broilers nibble feed at a chicken farm in Luling, Texas. The Food and Drug Administration has issued new guidance on how drug companies label antibiotics for livestock.

If drug companies follow guidance issued Wednesday by the Food and Drug Administration, within three years it will be illegal to use medically important antibiotics to make farm animals grow faster or use feed more efficiently.

The FDA's announcement wasn't a big surprise; a draft version of the strategy was released more than a year ago.

The bigger news is that the two biggest veterinary drug companies, Elanco and Zoetis, said Wednesday that they will, in fact, follow the FDA's advice and make it illegal for farmers to use their drugs for growth promotion. The Animal Health Institute, which represents most of the industry, likewise expressed enthusiastic support for the FDA's move.

Wednesday's announcement is the latest step in a long-running, sometimes convoluted effort by the FDA to reduce the use of antibiotics in agriculture. As we've reported in our series Pharmed Food, public health advocates are concerned that livestock producers' widespread use of antibiotics could lead to more drug-resistant bacteria, first in animals and eventually infecting people. They're especially concerned about the industry's practice of giving animals low doses of the drugs when they're not sick to make them put on weight faster. Those low doses are more likely to create resistance than high doses for animals that are sick, they argue.

In the newly official guidance, the FDA is hoping to reduce the "subtherapeutic" use by revising drug labels, which define the legal uses of each drug. The FDA is asking companies to remove "growth promotion" or "feed efficiency" as a legal use of any drug that is also used in human medicine. If those uses do not appear on the label, farmers can no longer legally use the drug for them.

The label changes are supposed to happen within three years. Companies have 90 days to say whether they intend to do this or not.

The FDA's announcement inspired diverse reactions. The Animal Health Institute, which has downplayed the risks of farm antibiotic use, promised to support the FDA's initiative — in part for public relations reasons. The AHI's Richard Carnevale told reporters in a conference call that it could help to dispel the common, but incorrect, belief that growth promotion accounts for most antibiotic use in agriculture. He says that most antibiotics are used to prevent or treat disease.

It's impossible to know how many of the antibiotics that farmers use are for growth promotion. The government doesn't collect that information.

Some critics of antibiotic use on the farm condemned the FDA strategy for not going far enough. The Natural Resources Defense Council called it "a free pass to industry" because it relies on voluntary cooperation, rather than binding regulations. The Johns Hopkins Center for a Livable Future predicted that the relabeling exercise will fail to reduce antibiotic use because farmers may just continue to give animals the drugs at low doses for "disease prevention" instead.

Veterinarians will play a key role in enforcing the new labels and making sure that antibiotics aren't used to promote growth under the guise of disease prevention. They also may be required to sign off on all uses of medically important drugs, if another draft regulation released Wednesday is adopted.

Currently, many of these drugs, such as tetracycline, are available over the counter for farm animals. If the FDA caught a veterinarian prescribing these drugs for growth promotion purposes, that veterinarian could lose his or her license.