Accessibility links
How Plastic In The Ocean Is Contaminating Your Seafood : The Salt Fish can absorb toxic chemicals that have been dumped into waterways, but they can also get them from eating plastic. And there's a lot of plastic in the open ocean, which scientists say can act like a sponge, soaking up the chemicals already out there. 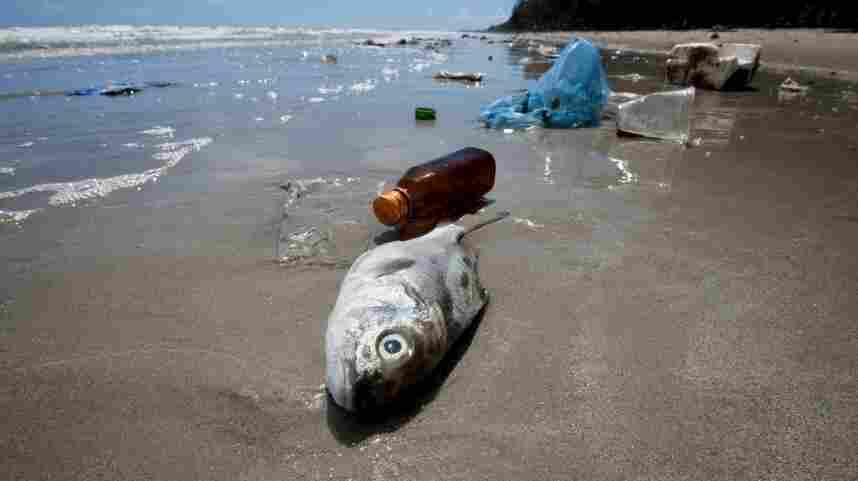 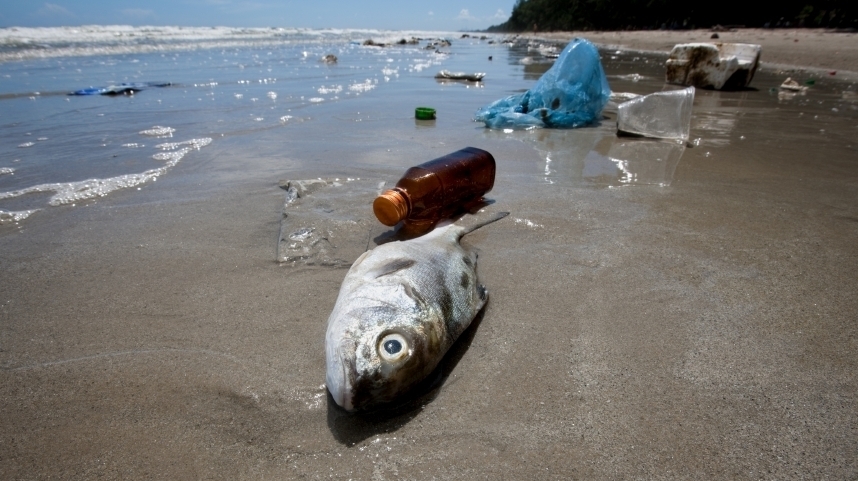 We've long known that the fish we eat are exposed to toxic chemicals in the rivers, bays and oceans they inhabit. The substance that's gotten the most attention — because it has shown up at disturbingly high levels in some fish — is mercury.

But mercury is just one of a slew of synthetic and organic pollutants that fish can ingest and absorb into their tissue. Sometimes it's because we're dumping chemicals right into the ocean. But as a study published recently in Nature, Scientific Reports helps illuminate, sometimes fish get chemicals from the plastic debris they ingest.

"The ocean is basically a toilet bowl for all of our chemical pollutants and waste in general," says Chelsea Rochman, a postdoctoral researcher at the University of California, Davis, who authored the study. "Eventually, we start to see those contaminants high up in the food chain, in seafood and wildlife."

For many years, scientists have known that chemicals will move up the food chain as predators absorb the chemicals consumed by their prey. That's why the biggest, fattiest fish, like tuna and swordfish, tend to have the highest levels of mercury, polychlorinated biphenyls (PCBs) and other dioxins. (And that's concerning, given that canned tuna was the second most popular fish consumed in the U.S. in 2012, according to the National Fisheries Institute.)

What scientists didn't know was exactly what role plastics played in transferring these chemicals into the food chain. To find out, Rochman and her co-authors fed medaka, a fish species often used in experiments, three different diets.

One group of medaka got regular fish food, one group got a diet that was 10 percent "clean" plastic (with no pollutants) and a third group got a diet with 10 percent plastic that had been soaking in the San Diego Bay for several months. When they tested the fish two months later, they found that the ones on the marine plastic diet had much higher levels of persistent organic pollutants.

"Plastics — when they end up in the ocean — are a sponge for chemicals already out there," says Rochman. "We found that when the plastic interacts with the juices in the [fish's] stomach, the chemicals come off of plastic and are transferred into the bloodstream or tissue." The fish on the marine plastic diet were also more likely to have tumors and liver problems.

While it's impossible to know whether any given fish you buy at the seafood counter has consumed this much plastic, Rochman's findings do have implications for human health, she notes. "A lot of people are eating seafood all the time, and fish are eating plastic all the time, so I think that's a problem."

And there's a lot of plastic out there in the open ocean. As Edward Humes, author of Garbology, told Fresh Air's Terry Gross in 2012, the weight of plastic finding its way into the sea each year is estimated to be equivalent to the weight of 40 aircraft carriers.

Consider the five massive gyres of trash particles swirling around in the Indian, Atlantic and Pacific oceans alone. Those gyres, Hume told Gross, contain "plastic that has been weathered and broken down by the elements into these little bits, and it's getting into the food chain."

One of those gyres is the infamous Great Pacific Garbage Patch. Fish could encounter the plastic in those gyres, but also much closer to shore, says Rochman.

Even so, the consensus in the public health community still seems to be that the benefits of eating fish — because of their omega-3 fatty acids, among other assets — exceed the potential risks. And many researchers advocating for Americans to increase their fish consumption argue that the levels of dioxins, PCBs and other toxic chemicals in fish are generally too low to be of concern.

The Environmental Protection Agency does put out advisories to warn consumers when fish get contaminated with chemicals in local U.S. waters. But a lot of our seafood now comes from foreign waters, which the EPA does not monitor. Just a tiny fraction of imported fish get tested for contaminants.

As for Rochman, she says her research in marine toxicology has persuaded her to eat seafood no more than twice per week. And she now avoids swordfish altogether.