Accessibility links
USDA Steps Up The Fight To Save Florida's Oranges : The Salt The agency is launching a new coordinated research effort to stop citrus greening, a disease imported from Asia that turns fruit bitter and unmarketable. It first turned up in Florida eight years. Now, it threatens to destroy the nation's citrus industry. 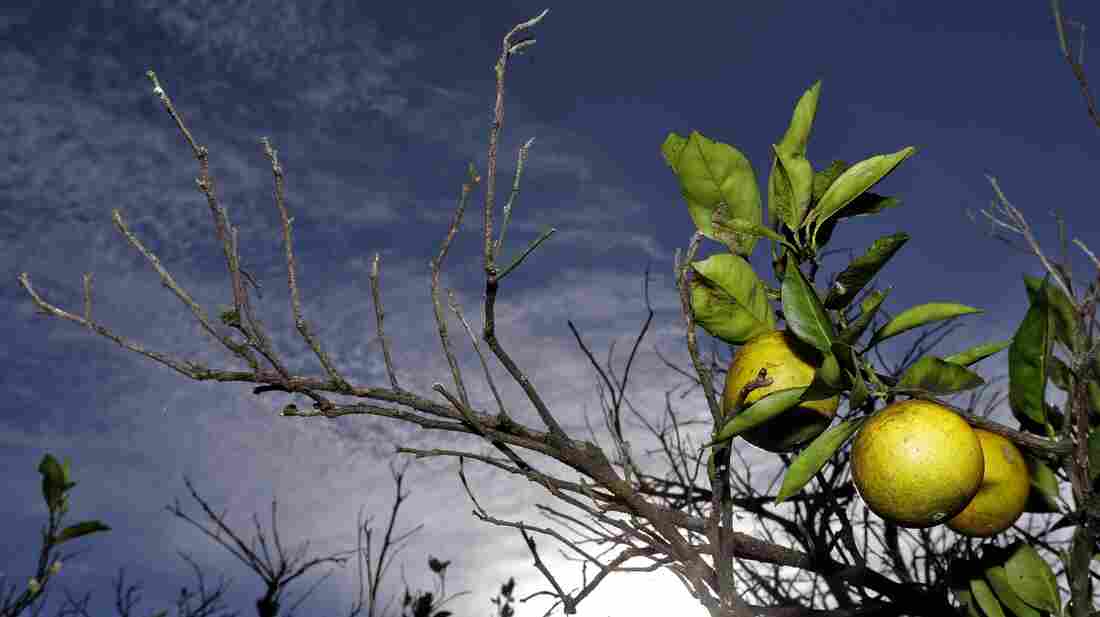 Oranges ripen in a Plant City, Fla., grove on Wednesday. Growers in Florida, Texas and California are worried about citrus greening, a disease that makes the fruit bitter and unmarketable. Chris O'Meara/AP hide caption 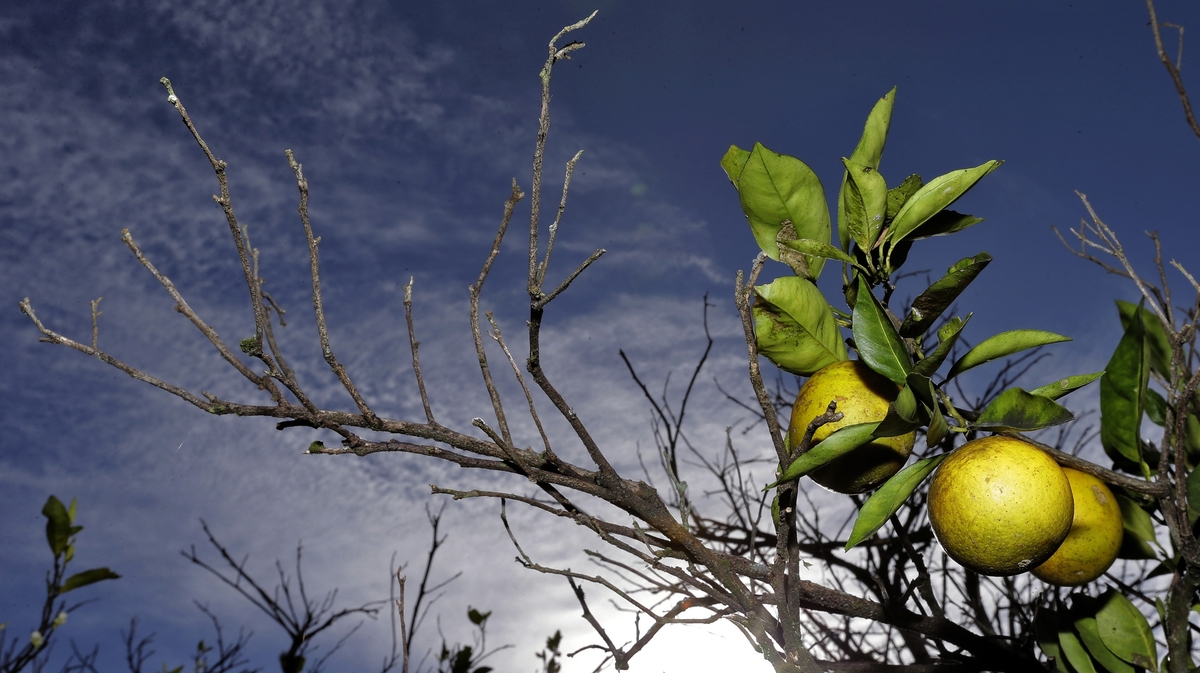 Oranges ripen in a Plant City, Fla., grove on Wednesday. Growers in Florida, Texas and California are worried about citrus greening, a disease that makes the fruit bitter and unmarketable.

The citrus industry is facing a crisis. It's called citrus greening — a disease that has devastated orange production in Florida since it first showed up eight years ago. Now the U.S. Department of Agriculture has announced a new effort to try to control the disease before it destroys the nation's citrus industry.

Citrus greening is carried by psyllids, tiny insects no bigger than a pinhead. It is caused by a bacterium that makes the fruit bitter and unmarketable. In California, Texas, and especially in Florida, where it first took root, many fear the disease could wipe out America's production of oranges, grapefruits and lemons.

It's a disease imported from Asia. Since its was first discovered in Florida in 2005, citrus greening has cost the industry $4 billion and 6,000 jobs, says Jack Payne, the senior vice president for agriculture and natural resources at the University of Florida. Payne says all of Florida's citrus groves are infected.

"We have so many growers now in a $9 billion industry just hanging on by their fingernails, literally, trying to get a cure for this terrible disease," he says.

In Florida, because of the disease, USDA says the orange crop will be off 9 percent from last season. It's the second straight year that production has declined and the lowest citrus harvest in Florida in nearly 25 years.

Scientists are trying to develop disease-resistant trees. They're experimenting with different rootstocks and genetically modified trees. But so far, there hasn't been a breakthrough.

To help the effort, Agriculture Secretary Tom Vilsack announced Thursday that several agencies within USDA are coming together to coordinate research and the fight to stop citrus greening. He said, "We felt it was necessary for us to have a more coordinated effort with the state and local partners and with the industry."
Vilsack says USDA has already spent $250 million combating citrus greening. With this announcement, he says, the agency is making an additional $1 million available for research immediately. And $9 million more in research funding is in the farm bill that's currently before Congress.

A spokesman with Florida Citrus Mutual, a grower's group, said they welcome the additional funding and the new coordinated approach to citrus greening. But a priority for Florida growers is the creation of a federal Citrus Research Trust Fund that could provide $30 million in funding to stop greening before it wipes out the industry.