Accessibility links
Time To Mix Up The Manischewitz Turkey Brine For Thanksgivukkah : The Salt Jewish foodies say the flavors of Hanukkah and Thanksgiving are a culinary match made in heaven. And this Thanksgivukkah feast is especially sweet because it may not happen again for 80,000 years. 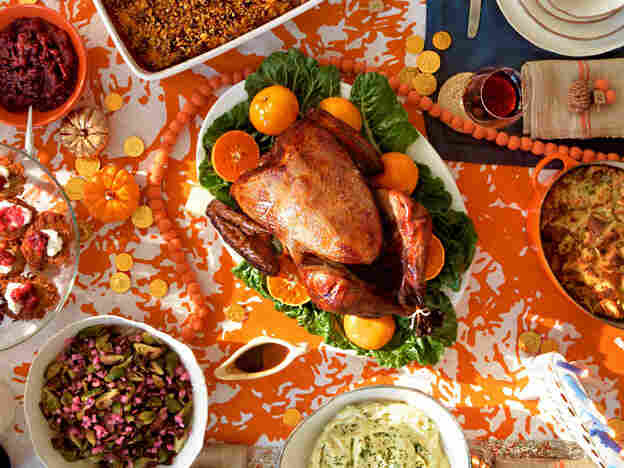 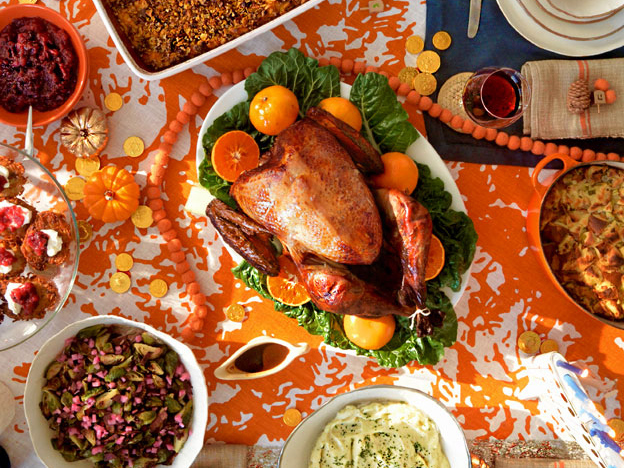 You may have heard that this Thursday isn't just Thanksgiving — it's also the holiday of Hanukkah. It's a once-in-a-lifetime convergence people are calling Thanksgivukkah. Which naturally raises two questions: How did this happen? And, more importantly, what do we cook for Thanksgivukkah dinner?

Emily Fleischaker is the food editor at the website BuzzFeed. She sat down with recipe developer Christine Byrne, and came up with a full-on Thanksgivukkah menu.

And for the main course? A turkey brined in Manischewitz.

"It's a little terrifying when you pull it out of the brine and it's bright purple," Fleischaker says, "but it turns out beautiful."

For dessert, they put rye and caraway in the pumpkin pie crust. And ruggelach — those Eastern European, rolled cookies — get a sticky, gooey pecan pie filling.

And it turns out that it's not just the flavors of Hanukkah and Thanksgiving that work so well together — it's the basic ideas.

Eve Jochnowitz is a culinary ethnographer who studies food in Jewish life. "From the Torah itself, there is the verse that you will come into the promised land, and you will eat, and you will be satisfied, and you will praise the Lord. And that really is the story of Thanksgiving." 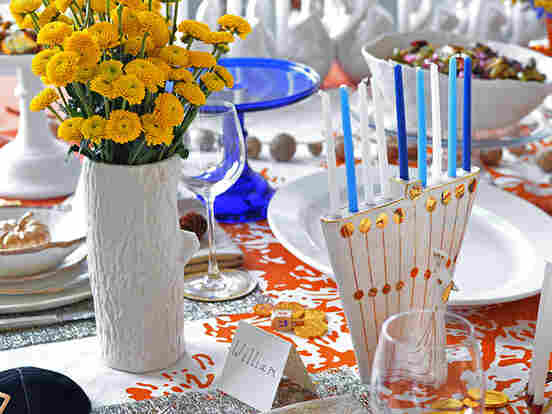 Jewish tradition and Thanksgiving have even the importance of table-setting in common. The code of Jewish law, the schulchan oruch, means "the set table." Macey J. Foronda/for BuzzFeed hide caption 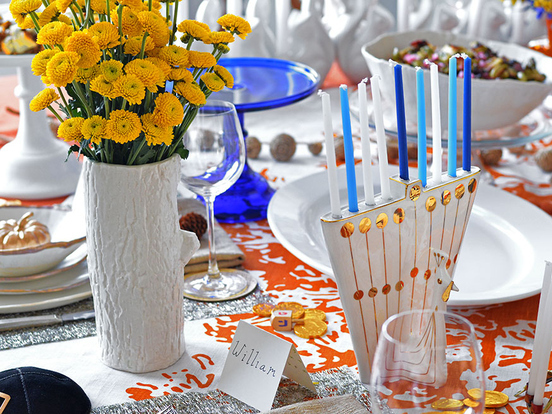 Jewish tradition and Thanksgiving have even the importance of table-setting in common. The code of Jewish law, the schulchan oruch, means "the set table."

"The table is the stage on which all sorts of Jewish values are performed. The code of Jewish law is called the shulchan oruch, the set table. And that commentary on the book is the mapach, the tablecloth."

But what about the overloaded table, a cliche of both Thanksgiving and Jewish grandmothers? Jochnowitz says that this sort of overflowing meal isn't necessarily a Jewish phenomenon — it's an immigrant phenomenon, a reaction from going from scarcity to abundance in the New World. And that can take the form of Jewish grandmothers frying up just one more latke — or pilgrims feasting at Plymouth.

"Food is so delicious, and it's so abundant, and there are so many choices. And we eat, and we are satisfied, and maybe we are even so stuffed that we can't move. And how can we help it?" Jochnowitz asks. "We cannot help giving thanks after enjoying this wonderful feast."

And this Thanksgivukkah feast is especially sweet because we don't know when it'll happen again. Those leap months help reconcile the Jewish calendar — but they don't do it perfectly. It's gaining a few extra days every thousand years — holidays are already over a week later then they were in ancient times.

If nothing's done to correct this, it'll be about 80,000 years before the calendars line up again. Which is all the more reason to mix up the Manischewitz turkey brine, and make the most of this Thanksgivukkah.