Accessibility links
Industrial Meat Bad, Small Farm Good? It's Not So Simple : The Salt When it comes to making livestock agriculture more sustainable, there's no one-size-fits-all approach. That's the conclusion of a study of livestock around the world.

Industrial Meat Bad, Small Farm Good? It's Not So Simple

Industrial Meat Bad, Small Farm Good? It's Not So Simple 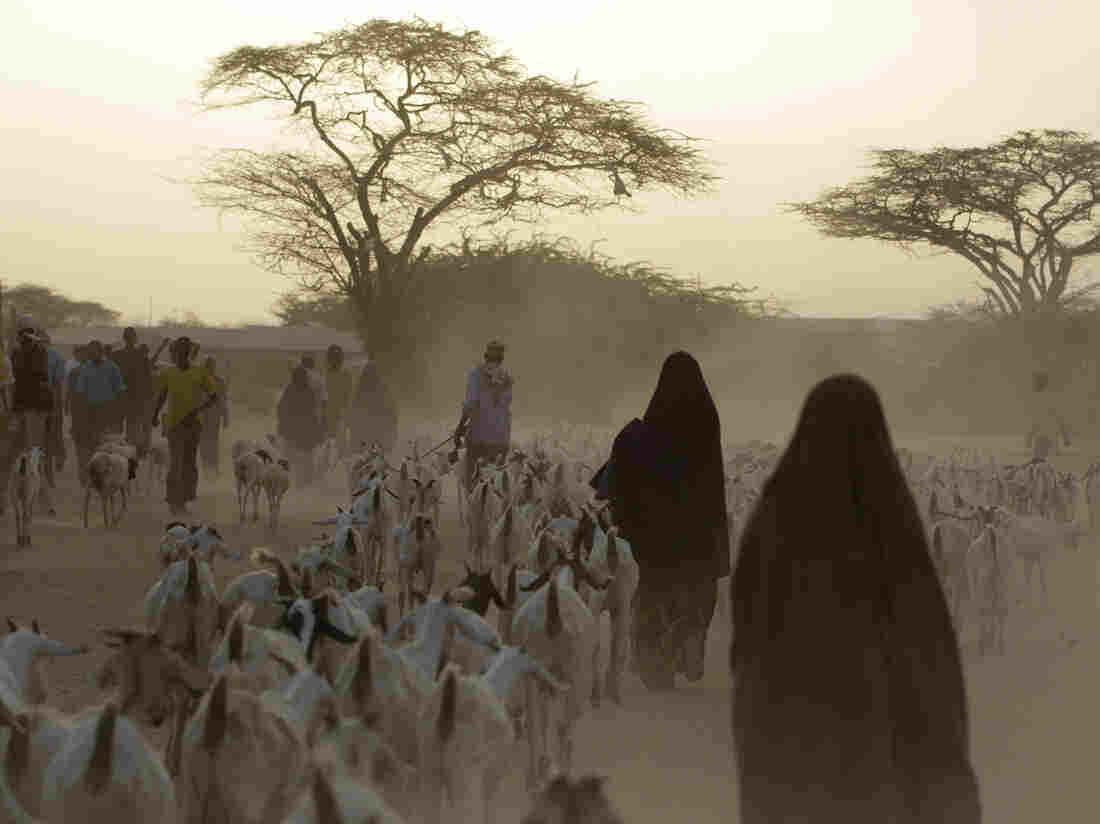 Somali refugees lead their herds of goats home for the night outside Dadaab, Kenya. A new study shows that animals in many parts of the developing world require more food — and generate more greenhouse emissions — than animals in wealthy countries. Rebecca Blackwell/AP hide caption 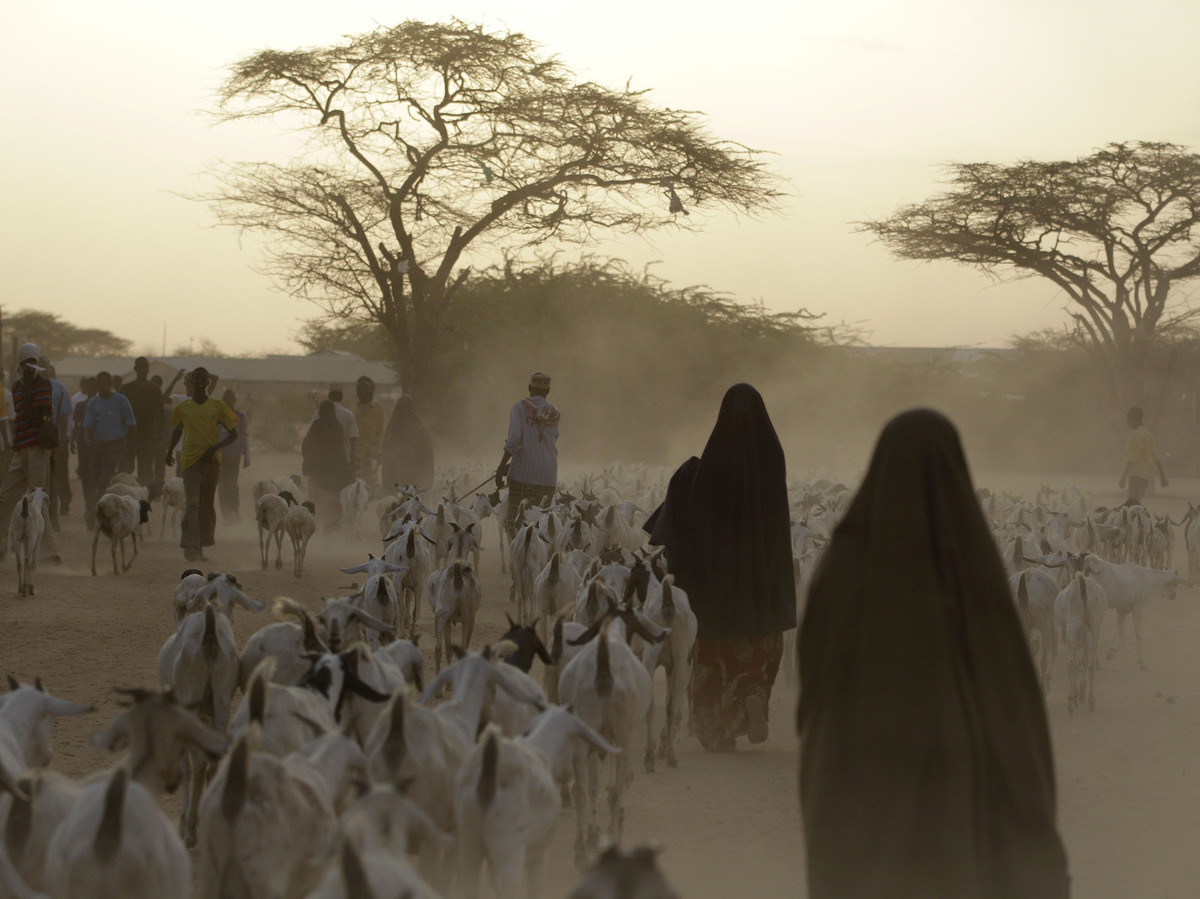 Somali refugees lead their herds of goats home for the night outside Dadaab, Kenya. A new study shows that animals in many parts of the developing world require more food — and generate more greenhouse emissions — than animals in wealthy countries.

To feed all 7 billion of us, address climate change and live longer, we all need to eat less meat. From Al Gore to the Meatless Monday movement to Harvard epidemiologists, that's been the resounding advice offered to consumers lately.

But hold up a minute, says Mario Herrero, the chief research scientist at Australia's national science agency, the CSIRO. Writing off food animals as greedy, inefficient polluters of land and water, artery cloggers and robbers of food from the mouths of hungry babes is perhaps a bit brash, he says.

Instead, it's important to see the global livestock sector as a super diverse system of tiny backyards and massive feedlots that defies generalizations, Herrero tells The Salt. Shifting to this view is becoming more and more important as we plan for a future of 9 billion people on Earth by mid-century.

It's also one of the takeaways of a assessment of global livestock systems by Herrero published Monday in the Proceedings of the National Academy of Sciences. Inside the vast dataset are new calculations of how livestock use land, how efficiently they convert feed into food for humans and their greenhouse gas emissions.

Given the range of human nutritional needs and the different ways of raising livestock, Herrero and co-authors argue, decisions about how to make meat and milk production more sustainable should probably be local ones. In other words, there's no "one-size-fits-all" blueprint for sustainability for farmers.

That's because when it comes to raising livestock, the contradictions abound, the authors note.

One example? While animals provide nutrients for farmers' crops (think manure), their waste also pollutes the land and water. While grazing animals can be beneficial to a grassland ecosystem, overgrazing can destroy it. Questions of health can be equally complex: Animal milk and meat are critically important sources of protein and other nutrients for many people – especially the poor – but they also contribute to obesity and chronic disease.

What this means is that a cattleman raising 10 cows on cruddy grassland in Zambia and the manager of a major Kansas feedlot have starkly different priorities when it comes to how they manage resources.

And the authors say the same goes for consumer choices about animal products in rich countries versus those in poor countries: While most Americans could forgo a third serving of bacon for the week, mothers in Cambodia may very well need to seek out more milk and chicken for their children.

But that nuanced global perspective is missing from the conversation about meat production, Hererro says. When we think about the global environmental impacts, we tend to imagine industrial U.S. cattle or hog producers spewing emissions and waste into the environment.

But according to the PNAS paper, smaller producers in the developing world account for the most emissions from livestock, including 75 percent of emissions from cattle and other ruminants (like goats) and 56 percent from poultry and pigs. That's mainly because of the sheer number of animals — millions more than those raised in Europe and the U.S.

The paper also reminds us that India is the world's biggest producer of milk and China, the largest producer of pork. Asia accounts for 55 percent of global pork production, dwarfing Europe (26 percent) and the U.S. (17 percent).

"The developing world is where the demand is growing the most, and it's also where we need to find better solutions for protecting resources," Herrero tells The Salt. That's going to mean getting more meat and milk out of each animal, with better feed on better managed land.

The study found that everywhere, smaller livestock like pigs and poultry convert feed into protein more efficiently — and have a smaller impact on the climate — than beef and dairy cows.

That might suggest that for maximum efficiency (and fewer emissions), we should focus on getting protein mainly from pigs and chickens. But as Herrero argues, there's a big tradeoff there.

"Pigs and poultry may be reservoirs of [diseases that can be transmitted to humans], like the flu, so we really need systems diversity," says Herrero.

Given all this complexity, what's a conscientious consumer to do?

Even though choosing to eat less meat won't dismantle industrial meat or stem the rising number of livestock animals on Earth, it still makes sense for consumers in the developed world, Herrero says.

"If we account for how much we consume in general terms — and the fact that we are responsible for most of the world's carbon dioxide emissions — then we should modify our diets and eat fewer animals products, if we can," he says. "We have a higher responsibility, because we are the ones that can make that choice."