Accessibility links
Hold The Cheese: Israelis Sway Domino's To Make Vegan Pizza : The Salt In America, pizza chains try to outdo each other by layering ever-more cheese on pies. But in Israel, vegans have convinced one pizza giant to take it all off. Bowing to a campaign from a group that promotes the vegan lifestyle in Israel, Domino's has added cheese-less pizzas to its menu there. 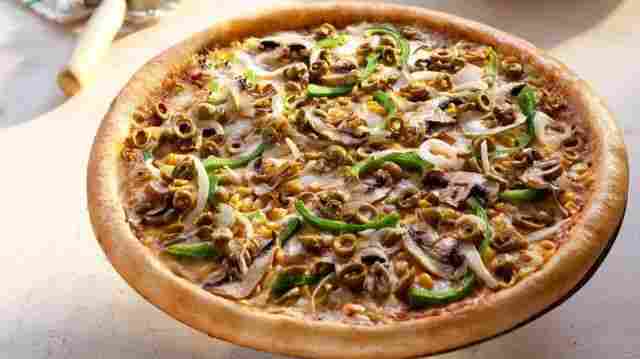 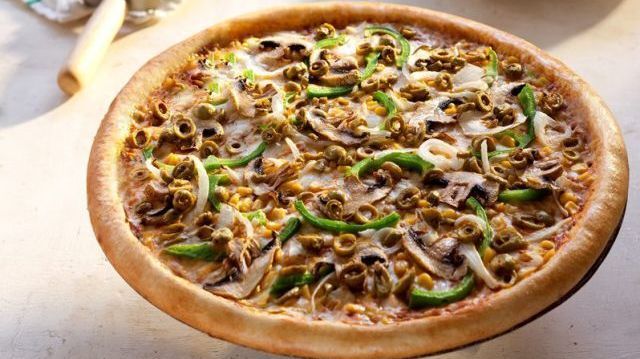 In the U.S., Big Pizza is locked in a battle that's as much a testament to gluttony as it is to food science: How much cheese can you possibly stuff inside of wheat dough?

Earlier this year, Pizza Hut took it to the next level with the Crazy Cheesy Crust Pizza: a regular pizza ringed with "pockets" oozing a five-cheese blend. (Our friends at Sandwich Monday sampled this addition to the pizza canon during its limited run.) By way of explanation of its existence, Pizza Hut's head chef told Yahoo, "Consumers always want more cheese."

But in Israel, apparently, they don't.

There, the cheese is being voted off the pizza, the Israeli daily Haaretz reported this week. It seems a passionate vegan lobby clamored so loudly for dairy-free pizza that Domino's had to acquiesce. The pizza chain's stores in Israel are now offering a family-size pizza with vegetables and a soy-based topping for about $20.

It all started with a Facebook campaign led by Vegan Friendly, a group that promotes the vegan lifestyle in Israel. Vegan Friendly claims to have a virtual community of 30,000 vegans in Israel, and has stamped hundreds of stores and restaurants with its vegan-friendly seal. The vegans wanted pizza, and they weren't going to stop until they got it.

"Israel is leading the vegan revolution around the world, and this is another indication," Omri Paz, the director of Vegan Friendly, told Haaretz's Dafna Arad. He said that with the new pizza on the menu, vegans could order from the chain "without pangs of conscience."

Domino's has 10,000 locations in more than 70 countries, including 50 branches in Israel.

We were curious whether the Israeli vegan pizza might inspire something similar on stateside menus. Not so much.

"We'll be paying attention to [the vegan pizza in Israel], but it's not something we're working on here in the U.S.," Domino's spokesman Tim McIntyre tells The Salt.

In the meantime, Domino's will continue selling Wisconsin 6 Cheese Pizza and the Stuffed Cheesy Bread to cater to the cheeseheads. (Americans consumed about 34 pounds of cheese per person in 2012, according to the U.S. Department of Agriculture, which some argue is a bit too much.)

Still, vegans or people who may simply want a lighter pizza may have more pizza options in the near future. The Wall Street Journal reports that Chipotle is getting into the choose-your-own-topping pizza business, with a new concept in Denver called Pizzeria Locale it helped finance.