Accessibility links
Amid Fields Of Plenty, A Farmworker's Wife Struggles To Feed Her Family : The Salt Many can't afford to buy the fresh produce that grows all around them, and some areas that grow enormous amounts of produce are among the highest in the nation when it comes to food insecurity. 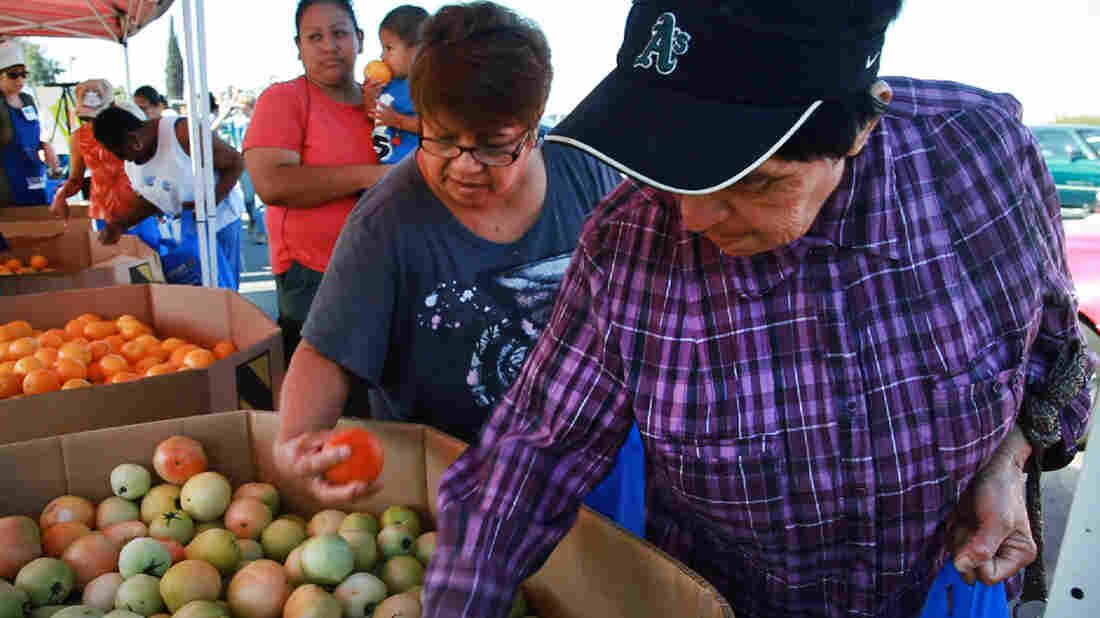 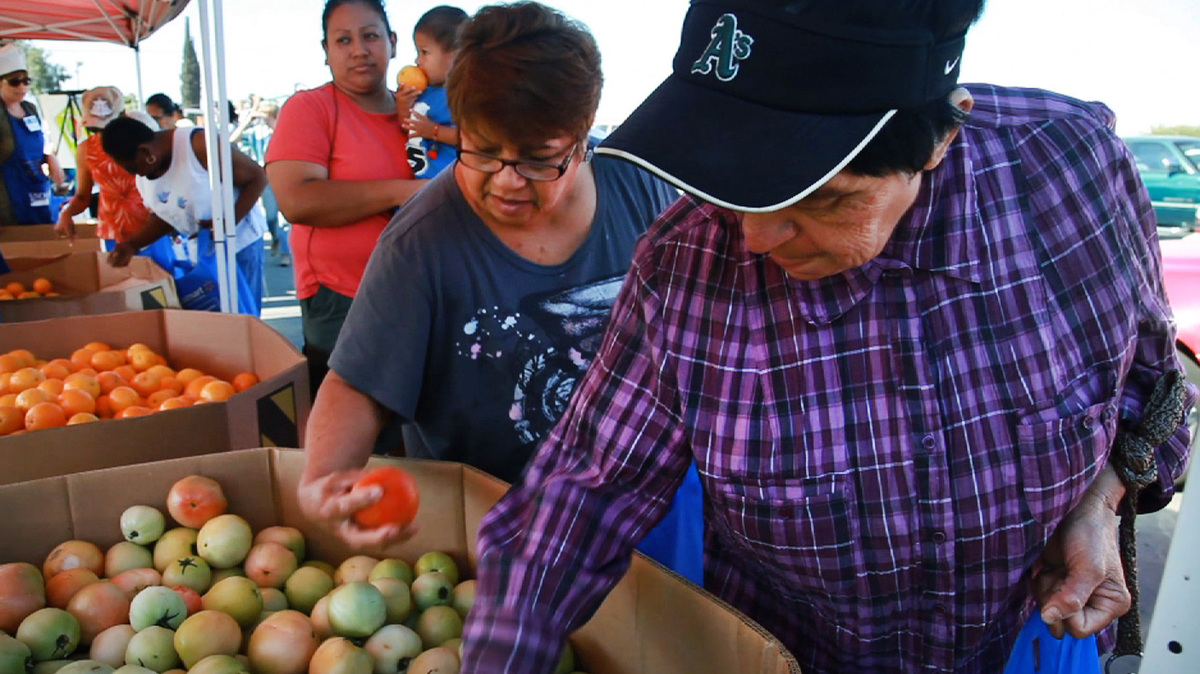 Food banks have become a primary source of nutrition for rural farmworker communities in the Central Valley.

California's San Joaquin Valley is one of the most productive farm regions in the world. But many farmworkers struggle to feed their families fresh and healthy food because they can't afford to buy the produce that grows all around them.

While Oscar Ortiz is out working in an almond orchard, his wife, Jessica Ortiz, is trying to figure out what to feed their five kids tonight.

To get to Ortiz's kitchen, you have to step over some rotting floorboards in the crowded living room, peel back a curtain and wait for your eyes to adjust to the dim light. You can see Jessica Ortiz's face better when she cracks open the refrigerator door.

She has a few eggs, some potatoes and half a bag of breakfast cereal.

"We don't have milk. Their bologna, ham, all their sandwich stuff, bread — we don't have. Our freezer is totally empty," she says.

Raisin City is a town of about 400 surrounded by vineyards. Many field workers here are from Mexico. But others, like the Ortizes, were born and raised in California.

'Hunger In The Valley Of Plenty'

Jessica Ortiz dropped out of high school her senior year after getting pregnant with their first child. The family's job prospects might be better in a bigger city. But here the only work is seasonal, often part-time field work. Oscar Ortiz averages $170 a week.

Jessica Ortiz pays the rent with cash aid from the government that varies depending on Oscar's income in the fields.

"He's out there picking for almost the whole world, and, I mean, he only brings like so much money home to feed his own family," Ortiz says. "We have many, many field workers that do that. They're out there providing for everybody else's family and barely bring home enough to take care of their own."

Their monthly food stamp allotment of $800 goes quickly at the local mini-mart in Raisin City.

Ortiz walks there with her kids to pick up groceries. She can rattle off the price of almost everything the market sells, part of her careful calculation to balance the household budget for seven people. 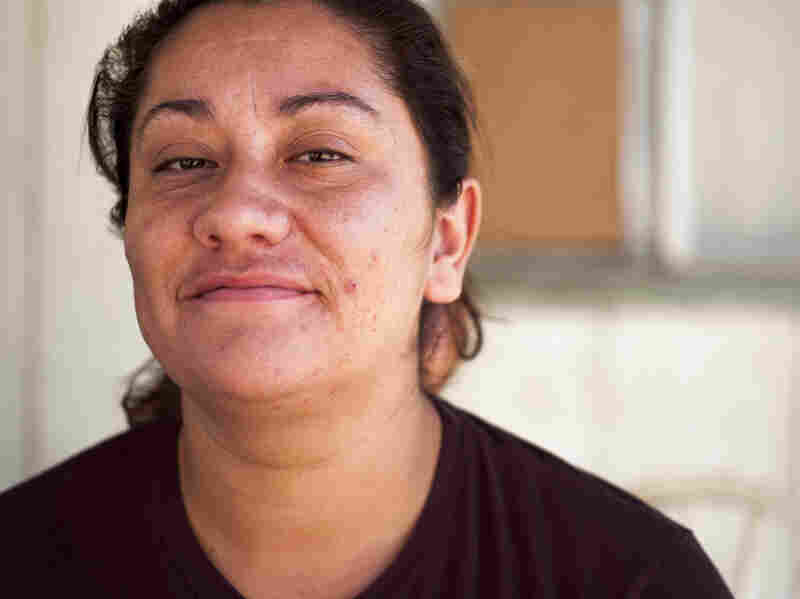 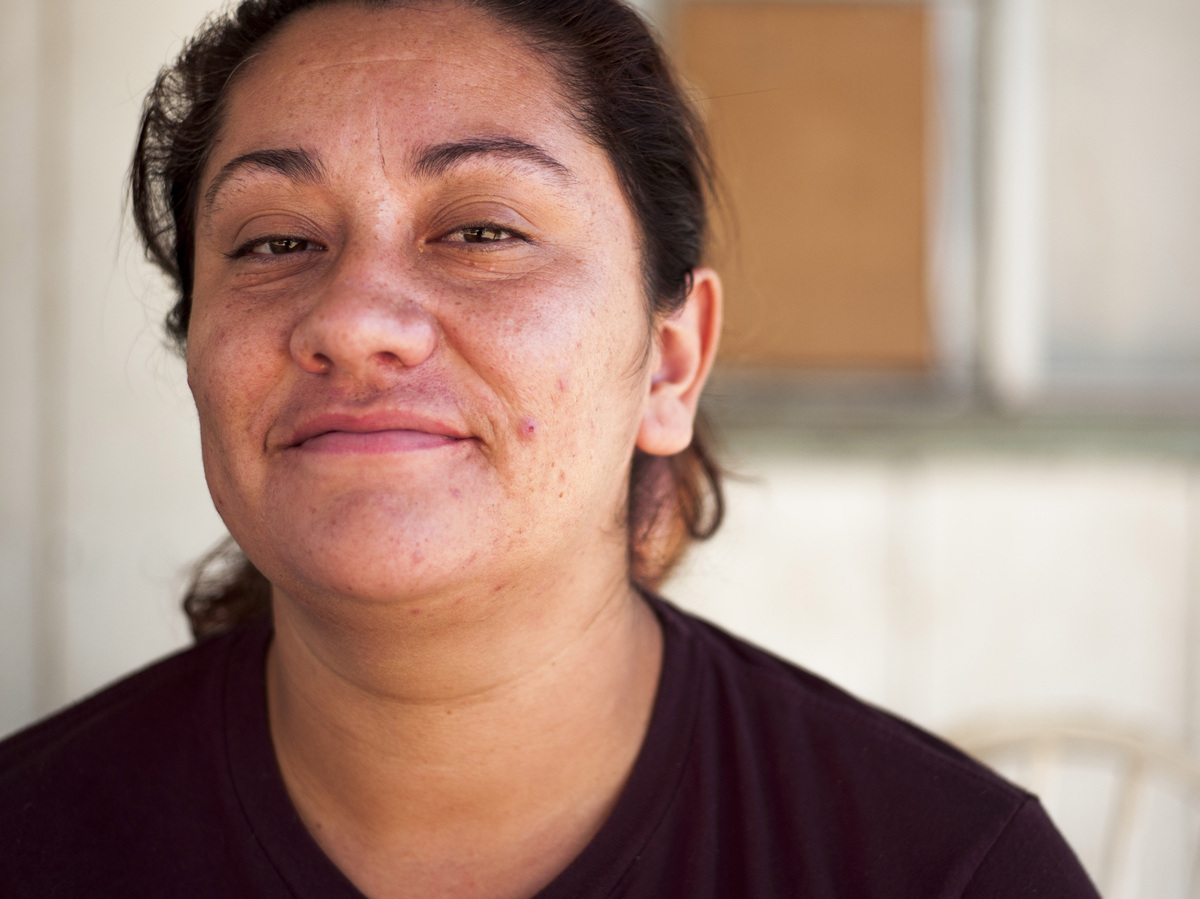 Jessica Ortiz often worries about what to feed her family.

But getting to big grocery stores in the nearby city of Fresno isn't easy. It's a 25-mile trip that turns into an all-day task, since the Ortizes don't have a car, and the bus only comes once a day.

"We could tell people, 'Yes, you're supposed to eat so many servings of fruits and vegetables,' " says Sarah Ramirez, an epidemiologist in California's Central Valley. "It's easy to say and not take into account the environment — the fact that in these communities, sometimes soft drinks are more affordable than water," Ramirez says.

This region ranks among the highest in the nation when it comes to food insecurity, or families not knowing where their next meal is coming from.

But it's also struggling with an epidemic of obesity and diabetes.

"The food system here locally is beyond broken," Ramirez says.

Food banks have become a primary source of nutrition for residents in dozens of rural towns, including Raisin City.

Once a month, the Fresno-based food bank has a produce giveaway in Raisin City, so that farmworker families can share in some of the bounty they help to harvest.

Hundreds of residents, including Jessica Ortiz, show up for this giveaway. Some arrive hours in advance to make sure they're at the head of the line.

"My kids, they'll run home from school and be like, 'What did we get?' " Ortiz says. "My baby loves bananas. So if he happens to get bananas, he thinks he won the race."