Accessibility links
This Stanford Ph.D. Became A Fruit Picker To Feed California's Hungry : The Salt Sarah Ramirez left a high-prestige career to bring California's bounty of unsellable fruit to food banks in the state's Central Valley. Her grass-roots organization is trying to address a regional conundrum: While many area farms end up with imperfect fruit that can't be sold to supermarkets, local farmworkers struggle to afford fresh produce. 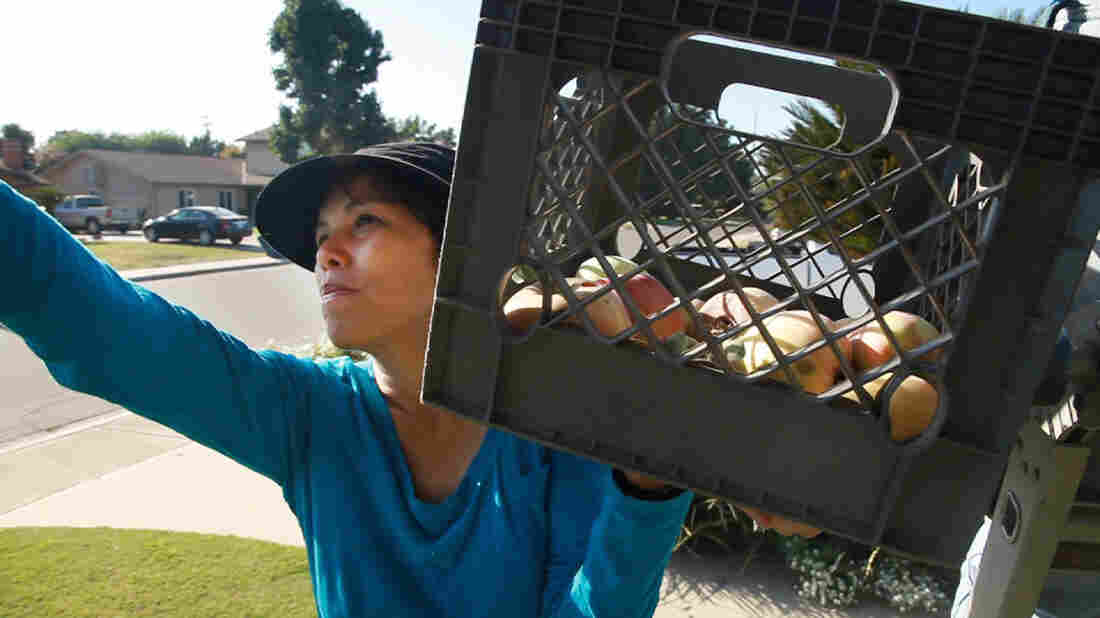 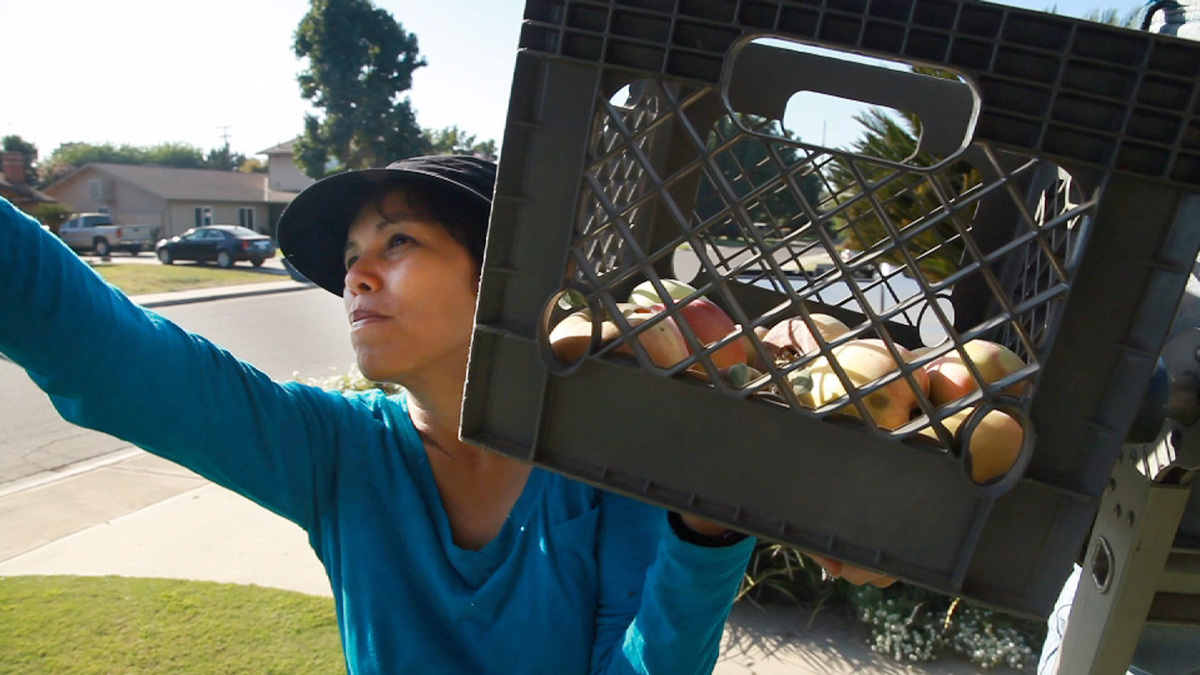 Sarah Ramirez runs an organization that brings excess produce to the hungry. Here, she gleans apples from a front yard.

By some estimates, we Americans throw away about 40 percent of our food, from the cabbage that's wilting in our refrigerators, to the fruit that's falling off the orange tree in our neighbor's backyard.

In California's Central Valley, one woman has started a grass-roots effort to feed hungry people by rescuing some of that produce.

At first glance, Sarah Ramirez's decision to leave a bright future as an epidemiologist with a doctorate from Stanford University to become a fruit picker might seem downright crazy. To understand her motivations, you first need to know a little about the economics of California's Central Valley, where Ramirez grew up, the daughter of farmworkers.

Many farms in the Central Valley supply fruits and vegetables for major supermarket chains across the country. Farmer Peter Mesias says those stores demand perfect produce to meet consumer's expectations.

I visited Mesias' farm this summer. He walked me through a squash field dense with prickly leaves, picked a zucchini and showed it to me.

"Right off the bat, you can see there's a nick, there's a little bit of a crook," he said. "That couldn't be packed in a box."

So that means supermarkets won't buy it. They prefer smaller, tender squash.

This year, Mesias ended up with acres of excess squash, and he hoped the local food bank would come take some of the imperfect fruit before he plowed it under.

'Hunger In The Valley Of Plenty'

Food bank director Sandy Beals says it's not uncommon for food banks to hear from farmers like Mesias.

"And if we can pick it, we can have it. I mean, how tempting is that?" Beals says.

But Beals says she can't easily send her staff to pick excess crops. The liability is too high.

"Somebody falls off a ladder and gets hurt. One incident like that could very easily put us belly up," she says.

And that's too bad. The food bank that Beals helps run in Tulare County, Calif., serves 1 out of every 4 county residents, many of them farmworkers. She says she's desperate for donations — she sometimes has to beg for an extension on the food bank's electricity bill so that she can keep the freezers running.

And that's where Sarah Ramirez comes in.

Ramirez has made it her mission to rescue produce from commercial fields and people's backyards. And as an individual, she can sign a liability waiver saying she won't sue if she gets hurt picking crops.

Ramirez grew up in Pixley, Calif., a rural town that John Steinbeck described in The Grapes of Wrath. She went on to earn a Ph.D. at Stanford and become Tulare County's epidemiologist, where she noticed some troubling trends: high rates of diabetes and obesity, paired with widespread food insecurity.

Ramirez says she noticed that a lot fruit in the region went unharvested. "And yet, at the same time, we have hunger and food insecurity," she says. "And it seems like we should be able to put a need with a surplus. Let's put the pieces together."

Ramirez recently moved back to Pixley to start a grass-roots effort called Be Healthy Tulare, a shoestring operation she and her husband fund themselves and operate out of their home in a trailer park.

"If I think about the overwhelming nature of the problem, it's so much easier not to do anything. And there's a lot of people who say the problem is so big, nothing we can ever do will fix it," Ramirez says. "Well, if we all took that position, nothing would ever get done."

Ramirez says she wanted to take action. So she decided to give up the prestige of a high-powered career to return to her roots, to the kind of work that her parents, who labored in the fields, tried to make sure she'd never have to do.

"One of our team members says I should be wearing a T-shirt that says, 'I have a Ph.D. and I pick fruit,' " Ramirez says.

"There is extreme unemployment, very high poverty and not a lot of hope that things will get better," Beals says. "And [Ramirez's] goal is to give people hope. And hope is the most important thing people can have."

This year, Ramirez and her tiny band of volunteers have gleaned 20,000 pounds of produce from farms and backyards.

And Be Healthy Tulare is doing more than just picking fruit. On weekends, Ramirez ties a colorful bandana on her head and gets out her sharp knives to hold "food labs" — nutrition classes to teach people how to incorporate more produce into their diets. They whip up delicacies like peach-cucumber gazpacho in the community kitchen of the Pixley trailer park.

They've also started a community garden to grow their own produce, and it's equipped with an outdoor propane stove.

That's where Maria Arevalo is sauteing some eggplant she just harvested. She worked in the fields for some 40 years before recently retiring.

"Vegetables used to look kind of tempting to me," she explains in Spanish, standing over an outdoor propane stove, "but I didn't know how to cook them. My mother never cooked them. People here can't afford them. They're a luxury."

But now Arevalo is eating fruit and vegetables grown in the organic garden. And it's paying off. She says her blood pressure is now under control. And her community is getting healthier, too.