Accessibility links
2013 Was The Year Bills To Criminalize Animal Cruelty Videos Failed : The Salt This year, 15 bills in 11 states attempted to make undercover videos on farms illegal. Not a single one passed. Activists say a broad-based coalition that tapped the grass-roots concern for animal welfare helped defeat the measures. 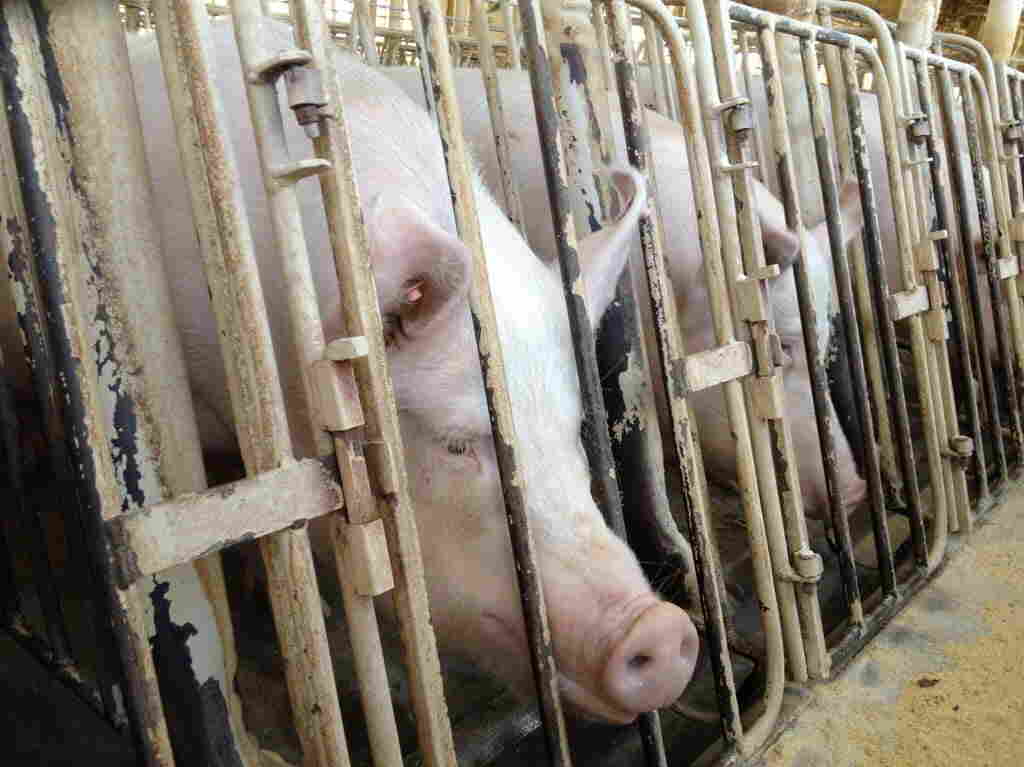 A Humane Society investigation of a Wyoming pig breeding facility to the introduction of an ag-gag bill in Wyoming, which eventually failed. Courtesy of Humane Society of the U.S. hide caption

toggle caption
Courtesy of Humane Society of the U.S. 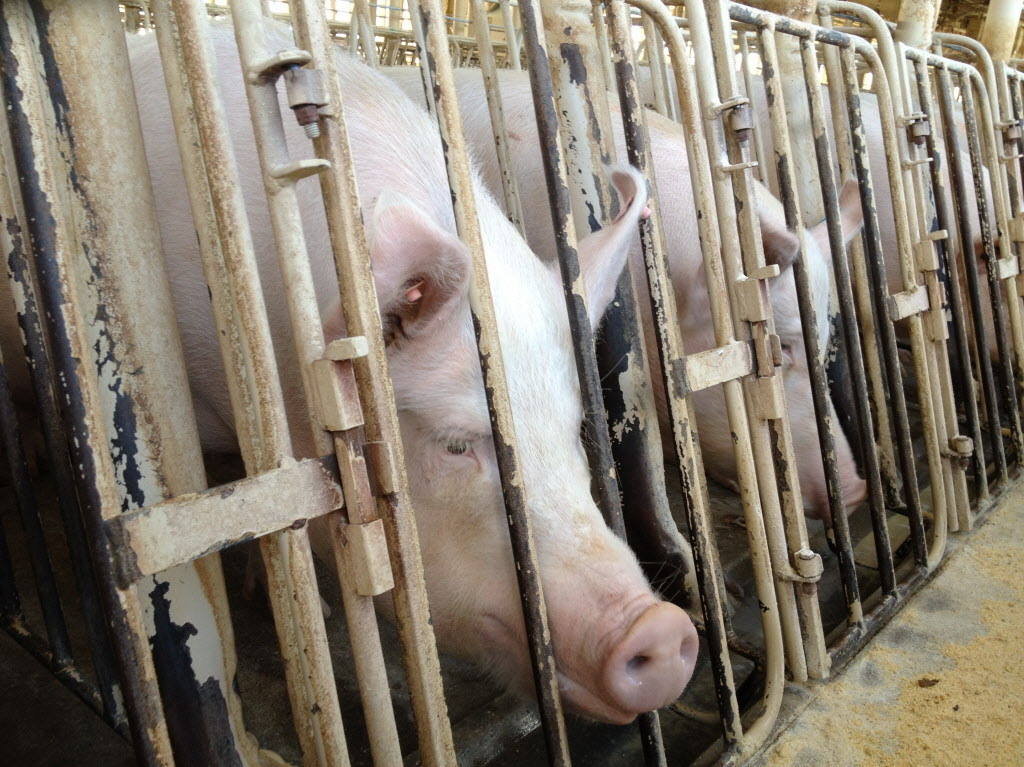 A Humane Society investigation of a Wyoming pig breeding facility to the introduction of an ag-gag bill in Wyoming, which eventually failed.

Courtesy of Humane Society of the U.S.

The past year was a busy one for the animal welfare activists who've turned their hidden cameras on confinement facilities where huge numbers of food animals are raised.

Livestock producers — and the policymakers they influence — were just as busy trying to make it illegal for activists to enter these facilities undercover.

You see, for the last several years, groups like the Humane Society of the U.S. and Mercy for Animals have caught some workers abusing animals red-handed. The groups say this abuse happens regularly out of view of the public and the law, and to expose it, they have to send in activists posing as ordinary workers, armed with video cameras.

The shocking videos made public have rankled animal agriculture groups, and strained their relationships with retailers. They typically respond that the videos aren't representative — they merely show one employee, doing the wrong thing at the wrong time. Industry groups, in turn, have pressured legislators in several states to introduce measures intended to protect them from these kinds of incursions into their business.

The colloquial term for this legislation is ag-gag. It refers to laws that make it illegal to photograph or shoot videos of internal operations of farms where food animals are being raised. And awareness of such laws is growing: "Ag gag" was featured as one of the words of the year in Sunday's New York Times.

Three states signed ag-gag bill into law in 2011 and 2012, setting new legal precedents. This year, a flurry of legislation — 15 ag-gag bills — was introduced in 11 states, but interestingly, not a single one passed. (Indeed, in some states, more than one measure was introduced: Tennessee and Arkansas each had two, while Indiana had three.)

What explains the failure of these bills, which either didn't get enough votes or were vetoed by governors? For details, we turned to Matt Dominguez, who spent 2013 traveling around the U.S. fighting various ag-gag bills for the Humane Society of the U.S.

According to Dominguez, ag-gag laws failed this year because of a large and broad coalition opposing them that tapped its grass-roots network to hammer legislators with emails, phone calls and online campaigns. The coalition included animal welfare groups, of course, but also environmental groups like Food and Water Watch, and organizations that advocate for a free press, like the National Press Photographers Association, and legal issues, like the American Civil Liberties Union.

The coalition also had public opinion on its side. A 2012 nationwide poll commissioned by the American Society for the Prevention of Cruelty to Animals showed that 71 percent of Americans support undercover investigative efforts by animal welfare organizations to expose animal abuse on industrial farms, and 64 percent oppose making such efforts illegal.

Another advantage was high-profile media coverage from The New York Times, Mother Jones and Rolling Stone, plus dozens of editorials in newspapers condemning ag-gag, says Dominguez.

Despite the sharp opposition, the trend seems to be towards more bills, not fewer, especially if investigations continue to paint damaging portraits of the industry.

What's more, says Dominguez, lawmakers are trying to find new ways to keep activists off the farm. The original ag-gag bills made it illegal to take photos and video, but now some states are instead attempting to pass mandatory reporting bills. They would require anyone who witnesses and videotapes abuse on a farm to turn recordings over to the state within 24 to 48 hours.

"It seems like it would be pro-animal, but it means you can't document a series of abuses," Dominguez says. "And then the industry can say, 'This is an isolated incident.' "

As we reported earlier in the year, California introduced a measure that would have required that anyone who videotapes or records animal abuse turn over a copy of the evidence to police within 48 hours. It failed.

So, what might next year hold for animal activists fighting ag-gag laws?

Dominguez expects that 2014 will be a lot like 2013, and that 10 to 15 bills will come back in various states, since many legislators work on a two-year cycle.

"They'll likely come back in the states where we've been fighting, and in new states," says Dominguez. "Lawmakers view it that they were beat by animal rights groups. They'll tweak the bills, make them more like animal protection bills to dupe the public."