Accessibility links
Deep Dish Or Thin Crust? Even Chicagoans Can't Agree : The Salt The Daily Show's Jon Stewart recently ranted against a culinary signature of Chicago: "Deep dish pizza is not only not better than New York pizza — it's not pizza," said Stewart, calling it "tomato soup in a bread bowl." Some Chicagoans protested. Others turned to their thin-crust pie, and took another bite. 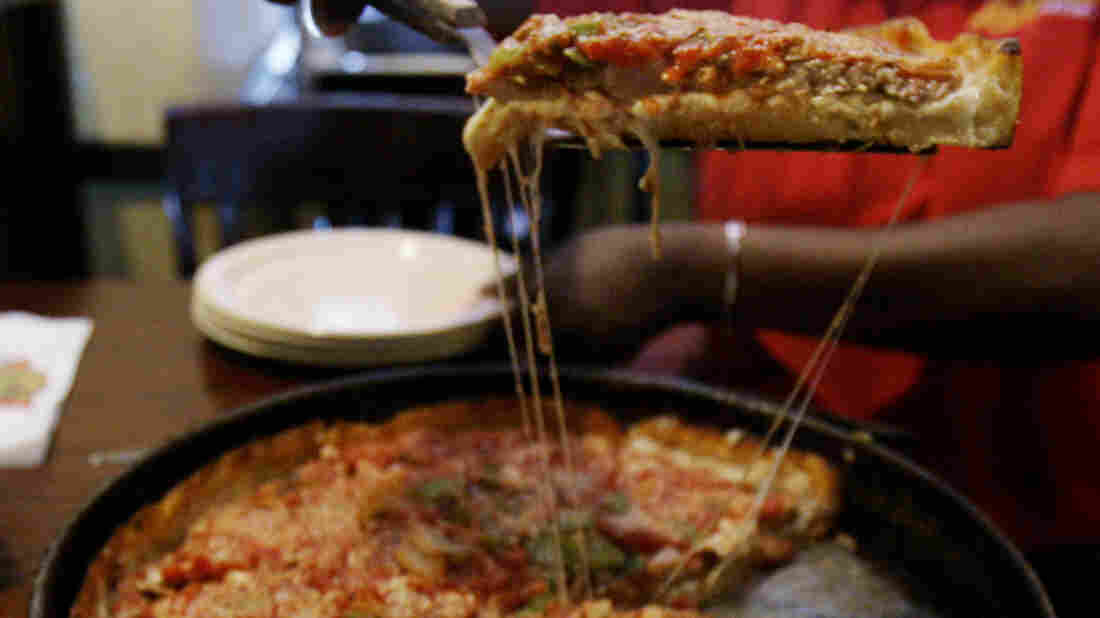 A server dishes up a slice of deep-dish pizza at Lou Malnati's Pizzeria in Chicago. The 1-1/2-inch thick legendary pie, loaded with sausage, mushrooms, pepperoni and onions, was invented in Chicago. M. Spencer Green/AP hide caption 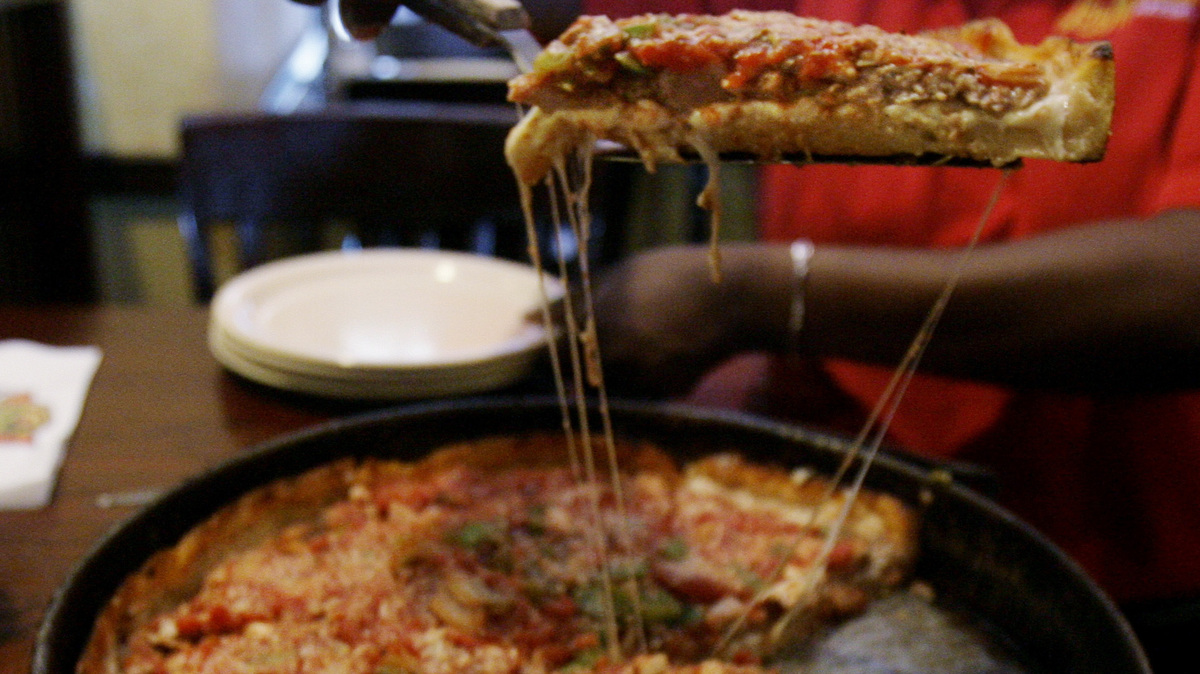 A server dishes up a slice of deep-dish pizza at Lou Malnati's Pizzeria in Chicago. The 1-1/2-inch thick legendary pie, loaded with sausage, mushrooms, pepperoni and onions, was invented in Chicago.

"Let me explain something. Deep-dish pizza is not only not better than New York pizza — it's not pizza," said Stewart, calling it "tomato soup in a bread bowl. ... I don't know whether to eat it, or throw a coin in it and make a wish."

Some upset Chicagoans made their own wishes — which can't be repeated here.

It's as if the whole city rose up to defend its pizza. But it may not really be Chicago's pizza after all.

Pizano's in the Loop is a pizzeria in the heart of Chicago, and it sells both deep dish and thin crust. During a recent lunch hour, most of the locals were eating ... thin crust.

"Nearly 9 percent of orders are deep-dish or stuffed pizza. So anything that's not a deep-dish pizza is 10 times more popular in the city of Chicago," says Mack. "Think about it: If you were to order pizza every day for 10 days, how could you possibly eat deep-dish pizza more than once? Good luck."

But Darren Tristano, a food industry researcher at Chicago-based Technomics, questions the data, noting that GrubHub's users tend to be younger with less money to spend. And yes, deep dish is more expensive.

And there's this: Not even half of the pizzerias for which GrubHub has data in Chicago offer deep dish on the menu.

GrubHub also doesn't include local deep-dish chains like Giordano's and Lou Malnati's. Those two chains have a combined 20 restaurants in Chicago — and sell three times as much deep dish as thin crust.

But a look at the city's history raises some questions about Chicago's true pizza legacy.

Porter says tavern-style pizza, the type cut into squares, was developed on the South Side of Chicago to keep working men in taverns. Free pizzas would go out on the bar, and the workmen would snack on it and stay there for an extra hour or two. It made all the difference in how much beer they drank.

"And that's one of the styles that we grew up with. I didn't even really have deep dish until I was almost in high school," Porter says. "So I truly do feel that the thin-crust tavern-style is the true Chicago style."

Marc Malnati, the fourth-generation owner of deep-dish chain Lou Malnati's, doesn't agree. He brokered an on-air truce with Stewart over one of his deep-dish pizzas.

"I think that the deep-dish pizza has been and always will be Chicago's pizza," Malnati says.