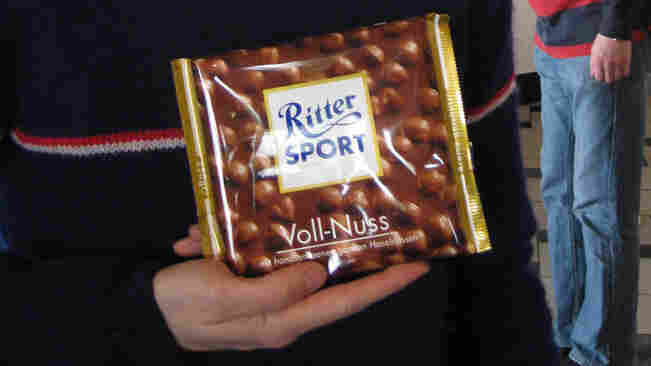 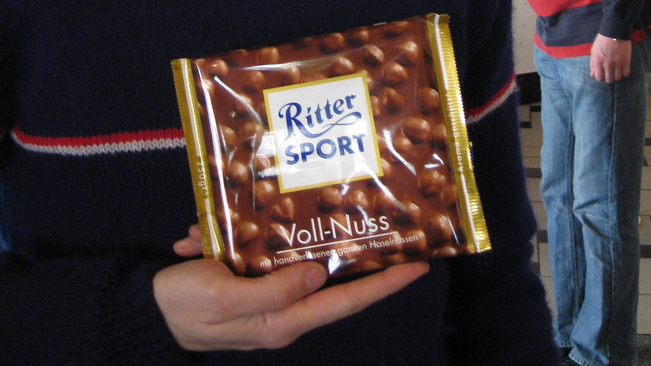 Ritter Sport says the chemical responsible for the vanilla-like aroma in its top-selling Voll-Nuss chocolate nut bar is all natural. But Stiftung Warentest — basically Germany's version of Consumer Reports — disagrees.

If you're selling food in Germany, "natural" is good. It's a place that distrusts technological manipulation of what we eat.

Witness, for example, a 500-year-old law that allows beer-makers to use only three ingredients: water, barley and hops. The law has since been loosened slightly, but many brewers continue to abide by it for marketing reasons.

This helps explain a fierce court battle now underway between Ritter Sport, one of Germany's leading chocolate makers, and an organization called Stiftung Warentest, which carries out tests of products (not just food) to see how they measure up to their marketing claims. Think of it as a German version of Consumers Union.

In late November, just before the big chocolate-buying season, Stiftung Warentest released a new report on Germany's chocolate options. In a stinging blow to Ritter Sport, the testers called Voll-Nuss, the company's top-selling nut-filled product, "deficient" — although they admitted that it did taste good.

The problem? It contained a chemical called piperonal, a vanilla-like aroma that Stiftung Warentest believes was manufactured using synthetic chemistry. In other words, unnatural.

Ritter Sport reacted like a goaded bull. The company declared that the piperonal in its chocolate has been extracted from natural sources, such as dill, violet flowers, black pepper, and vanilla. (According to European Union regulations, it is permissible to use either water or alcohol to extract "natural" flavors and aromas from herbs and other plants.) Ritter Sport then went to court, demanding that Stiftung Warentest retract its report.

The judge did, in fact, order Stiftung Warentest to stop making this claim until the case is resolved. It's still possible to order the report online, but all references to piperonal in the Ritter Sport chocolate have been blacked out, as if they were state secrets.

Stiftung Warentest admits that its tests cannot distinguish between synthetic piperonal and the same aroma extracted from herbs. It continues to insist, however, that Ritter Sport must be using the synthetic aroma because naturally obtained piperonal would be too expensive.

According to an account in Der Spiegel, a German newsmagazine, the judge in the case seems reluctant to rule in the case. At a recent hearing, he suggested that the two sides simply commission an independent audit to resolve the issue. The company and Stiftung Warentest refused. A decision isn't expected until early next year.