Accessibility links
When Is Cinnamon Spice Not So Nice? The Great Danish Debate : The Salt Cinnamon swirls are beloved in Denmark, but recent testing by the Danish government found many of these rolls had more of the spice than allowed by European health guidelines. Now bakers may have to change their time-tested recipes. Too much cinnamon? Yes, there is such a thing. 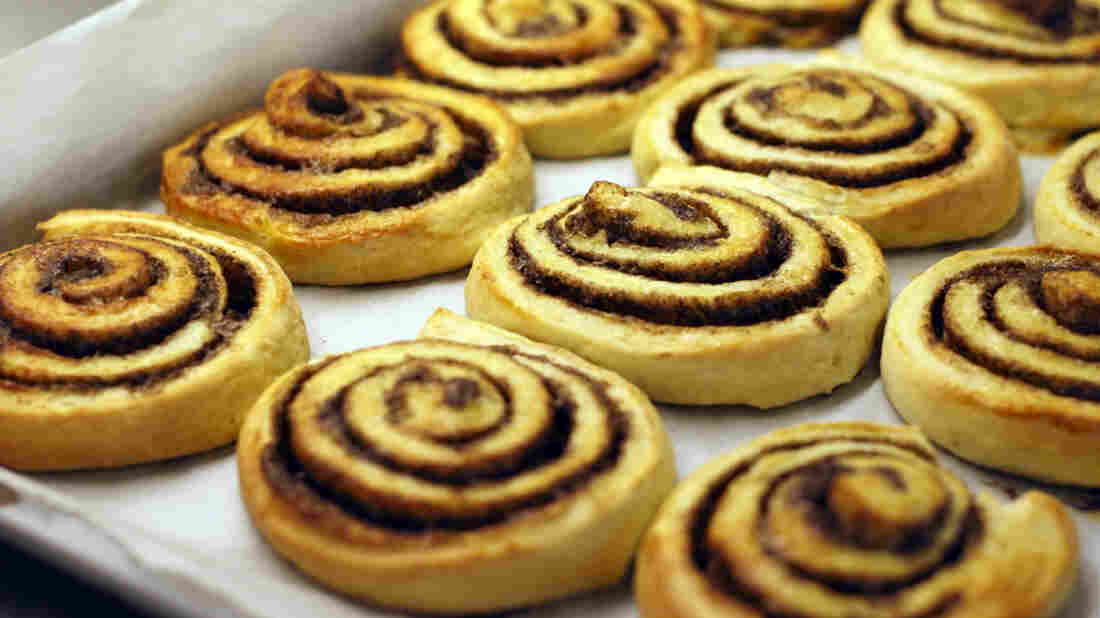 Ah, the cinnamon swirl: They're beloved by the Danish, but the traditional recipe for these pastries may be too spice-laden for European Union law. iStockphoto.com hide caption

Who doesn't love a Danish pastry?

And in Denmark, they like their pastries sprinkled with plenty of cinnamon.

But now, Denmark's bakers are being told that their time-honored recipe for the beloved kanelsnegle — or cinnamon swirl — may be unhealthy and against the law. Recent testing by the Danish government found that a large number of the rolls had too much cinnamon — more than the recommended limits set by the European Union.

Too much cinnamon? Yes, there is such a thing. Actually, the concern here is coumarin, a naturally occurring ingredient found in Cassia cinnamon, the most common variety of the spice sold in Europe and the U.S. In high-enough doses, coumarin can cause liver damage in a small group of sensitive individuals.

Back in 2008, the European Union set a limit for how much naturally occurring coumarin foods can contain: between 5 and 50 milligrams per kilogram of food, depending on the product (holiday goodies get a bit of a free pass).

But in a recent survey conducted by the Danish Food Administration, almost half of the "fine baked goods" tested were over the line. Now Danish food authorities say bakers have to cut back on the spice in their swirls.

And that has bakers up in arms; they worry that changing their recipes will spell the end of a centuries-old baking tradition.

In a news release, the head of the Danish Baker's Association, Hardy Christensen, countered, "We must recognize that to get a cinnamon roll ... to taste like cinnamon, we have to use more than the very small amounts allowed, or it's the end of the cinnamon roll as we know it."

As with most dilemmas in Denmark, "cinnamon-gate" has now landed in the conference room. Government officials and industry leaders are pondering the fate of the rogue rolls. Their next meeting is scheduled for February.

In case you are wondering, the U.S. Food and Drug Administration does not set limits on coumarin found in cinnamon-flavored products.

But experts say that adults would have to eat a lot of Cassia cinnamon to be at risk. For an adult, that limit is about a teaspoon a day, according to the daily tolerable intake set by the European Food Safety Authority — or roughly about as much cinnamon as you'd find in an entire batch of cookies.

If a "batch-a-day" describes you (hey, we're not judging, it's Christmas), consider switching to the pricier Ceylon — or "true" — variety of cinnamon, which has very little coumarin and a milder taste than Cassia.

The bigger concern? Kids who eat cinnamon-heavy foods year-round and people who treat cinnamon as medicine. (Interest in cinnamon is growing because of its reported health benefits. Stay tuned for more on that story here on The Salt.)

For a toddler weighing 30 pounds, the daily limit under Europe's rules would be less than 1/4 teaspoon per day. A daily sprinkling of cinnamon and sugar on oatmeal could conceivably hit that mark.

And a recent survey of U.S. foods did find a few common cinnamon-flavored products (breakfast cereal and granola bars, among them) in which the coumarin level in a single serving would exceed Europe's guidelines for a young child.

But Ikhlas Khan, who authored that study, says unless your kid is on a cinnamon roll diet, there is no need to panic.

"It's not a hard and fast, 'If you eat this particular cereal in this quantity you're going to get something,' " says Khan, the assistant director of the National Center for Natural Products Research at the University of Mississippi's School of Pharmacy.

Only certain individuals are even going to be susceptible to liver issues from coumarin, he says. That person would have to exceed the maximum recommended daily intake for at least two weeks before liver problems cropped up — and if problems do occur, the toxicity is reversible.