Accessibility links
Here's How Young Farmers Looking For Land Are Getting Creative : The Salt Across the country, there's a wave of interest in local food, and a new generation of young farmers wants to grow it. But many aren't buying land. Instead, they're renting it.

Across the country, there's a wave of interest in local food. And a new generation of young farmers is trying to grow it.

Many of these farmers — many of whom didn't grow up on farms — would like to stay close to cities. After all, that's where the demand for local food is.

The problem is, that's where land is most expensive. So young farmers looking for affordable land are forced to get creative.

Lindsey Lusher Shute, executive director of the National Young Farmer's Coalition, says that her organization conducted a survey of 1,000 farmers in 2011, and "land access came up as the No. 2 challenge for farmers [who were] getting started." It came in right behind not having enough financial capital.

Put simply, in areas close to major cities, especially on the East and West coasts, farmers can't pay nearly as much for land as people who would build houses on it.

In fact, it's not a new problem. Several decades ago, state and local governments, and nonprofit organizations, began attempts to preserve farmland that was threatened by urban sprawl.

They set up programs that give farmers cash in exchange for a legally binding promise that their land can only be used for farming, forever. As a result, farmers don't have to compete against developers for that land, making the land cheaper.

Shute says these programs are great — but insufficient. When she and her husband tried to buy land in the Hudson River Valley for their own farming operation, they found that even this permanent farmland was too expensive for normal farmers to buy.

Their farm, Hearty Roots Community Farm, grows mostly high-value vegetables. "We're making, per acre, just about as much as you can," says Shute. "And still, this conserved land was really out of reach."

They realized that they were facing competition of a different kind: wealthy people who wanted farms as country estates, bidding up the price. They were allowed to buy the preserved farms because they were not subdividing the property and developing it, but they were not really using the land as a working farm.

So Shute and her young farmers coalition are pushing for an extra level of farmland protection. Under these rules, people would be allowed to own conserved farmland only if they actually earn most of their money from farming.

This kind of program already exists in Vermont and Massachusetts. But it, too, has limitations. Robert Wagner, a senior adviser for the American Farmland Trust, says Massachusetts and Vermont recently looked at who's buying this relatively cheap land.

"What they found is that these properties — when they sell — are being sold to other farmers who are adding these operations onto their farms," says Wagner. Young farmers, just starting out, typically can't compete for this land against established farmers who want to expand.

So many young farmers aren't taking the traditional route. They aren't buying land at all, but renting instead. Sometimes, they are forming partnerships with older farmers who are leaving the business but don't want to sell the family land. 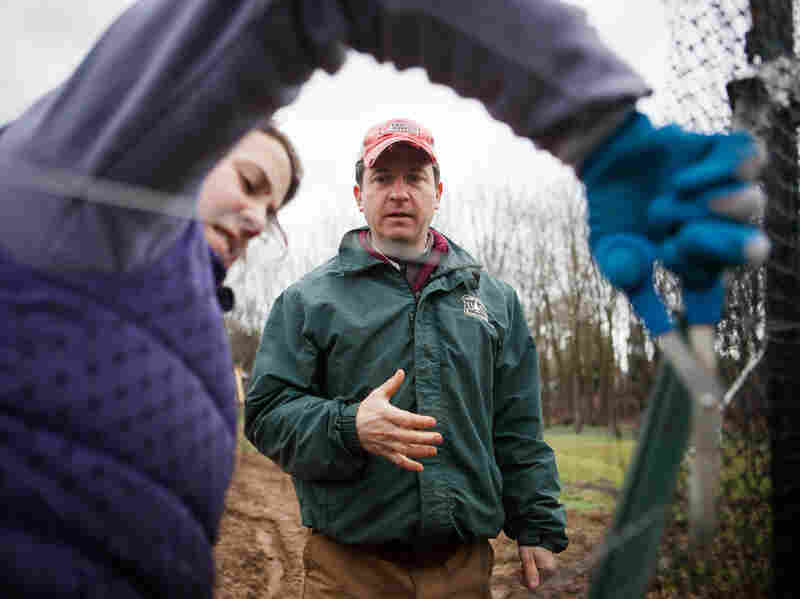 Chris Guerre and his wife, Sara, repair a fence at their farm in Great Falls, Va. Zac Visco for NPR hide caption 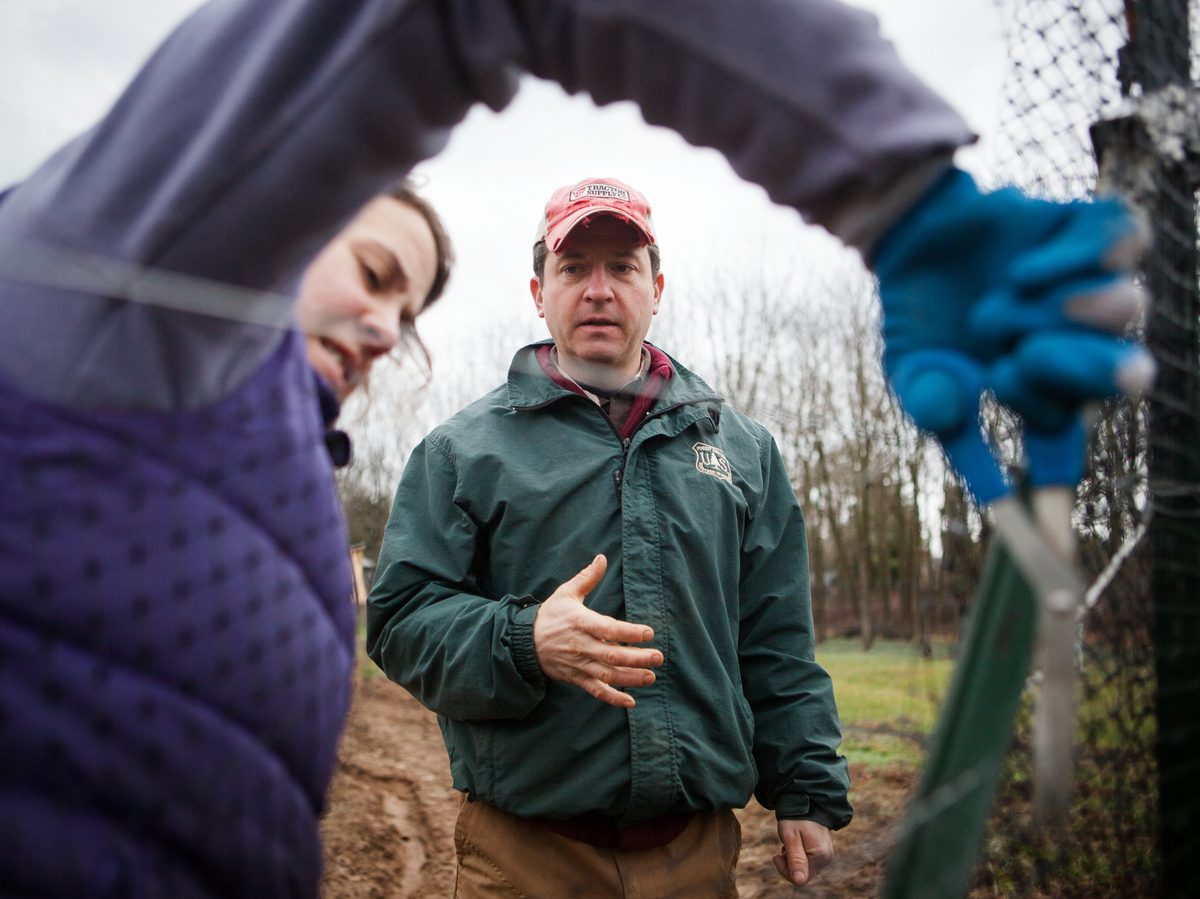 Chris Guerre and his wife, Sara, repair a fence at their farm in Great Falls, Va.

Chris Guerre is an example. To get to his land, you drive down a long lane, past million-dollar homes on multiacre wooded lots, in the wealthy community of Great Falls, Va., just outside Washington, D.C.

Then, unexpectedly, you come to an old barn, a couple of chicken coops, and 2 1/2 acres of vegetables. During the winter, the vegetables are covered by a kind of blanket, to keep them from freezing, that still lets water and sun through.

"We're one of the few farms left in the county, let alone one that grows and picks every week of the year," Guerre says. "Every week, even in winter, I'm growing and picking crops.

Guerre didn't grow up on this farm, or on any farm.

About five years ago, before he arrived at this spot, he ditched what he calls his "career job" to grow and sell food. He and his wife expanded their garden; they started selling vegetables at a farmers market and opened their own store selling food grown on other local farms. One day, at the farmers market, a woman came up to them.

"She approached my wife, and wondered if we might be interested in living on her family's farm. There was room to grow vegetables, or have animals. And we said, 'Yeah!' " recalls Guerre.

It turned out to be this farm. Guerre and his wife moved into the house. They're renting the land, and there's no guarantee that the family that owns it won't someday decide to sell it to a developer.

But Guerre doesn't seem worried. "They've been just very kind to us, and very encouraging, and helped us get to where we are," he says.

Guerre has built a new chicken coop; fixed roofs and plumbing; turned an old milk room into a washroom for vegetables.

He says, even if they did have to move someday, and leave all this behind, it wouldn't be the end of the world. He's pretty sure he could find land somewhere else. "If you walk a couple of miles in any direction, there's hundreds of acres."

In fact, he says, "Acquiring land is honestly probably the easiest part of doing all this. It's the commitment, the stamina, learning how to do it and doing it every single day: That's the hard part."

If you're ready to do all that, he says, you really can make a living. As for finding land, start hanging out with farmers, ask questions, and chances are you'll eventually hear about places where you can grow some food and start your own farming business.