Accessibility links
Was 2013 Really The Year Of The Paleo Diet? : The Salt Paleo was Google's most searched diet for 2013, but that doesn't mean it went mainstream. Instead, media coverage of one book criticizing the diet may have stoked much of the interest in the diet. 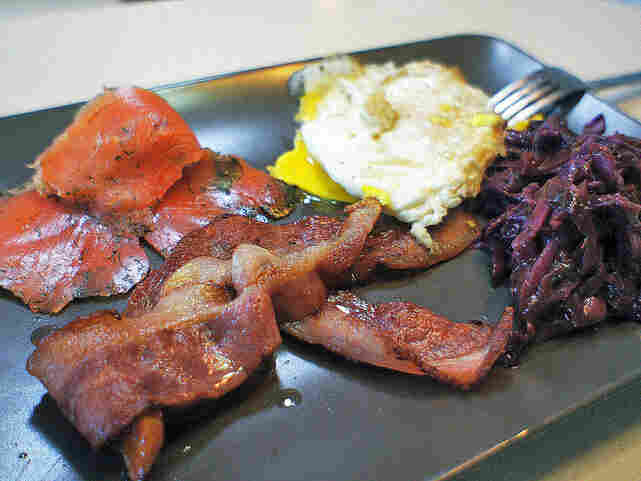 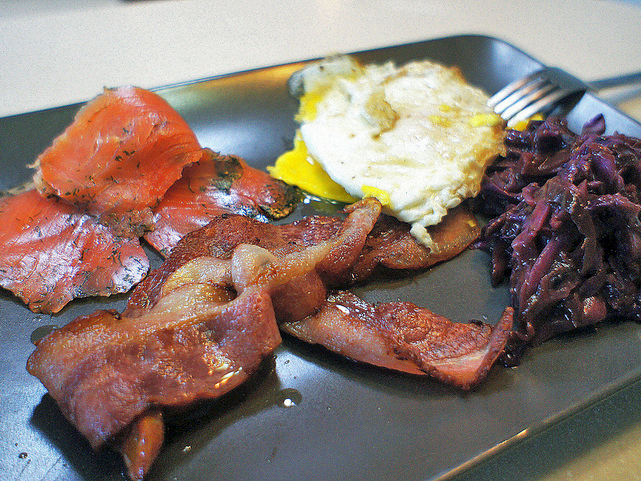 A paleo-inspired breakfast of salmon, egg, cabbage and bacon.

Google Trends has released its annual Zeitgeist list so that we can mull over the burning questions of the day.

And this year, the most googled diet was the paleo diet. Some have suggested that paleo's Google search triumph means that this is the "year of paleo." Paleo advocates interpreted the Google search data to mean that the movement is growing exponentially.

The diet's reputation has been burnished lately with endorsements from Major League Baseball players, boxers, celebrity actors and musicians.

And paleo dieters are a passionate bunch. They make the intriguing assertion that there's a mismatch between our genes, which are best adapted to a hunter-gatherer lifestyle because that's how we've spent most of our time on Earth, and a modern life replete with temptations like Cheetos and cronuts. Their thinking goes that before agriculture flooded our diets with "Neolithic" grains and sugar, we were healthier and happier.

Thus, they say, to attain an optimal state of health, we should consume a diet close to what our ancestors ate: vegetables, meat, tubers and fruit. That's the general gist, though the authors of the latest paleo books concede that the paleo diet itself is evolving. Dairy, for example, need not be restricted if you can tolerate lactose. "It seems clear now that there are some genetic changes that allow some of us to partially adapt to agriculture," says Chris Kresser, author of Your Personal Paleo Code, which promotes an individualized approach to the diet.

This year brought a flurry of recipe blogs as well as paleo products and services catering to the newly converted. But this year's paleo books — including one that sharply criticized the diet — and related media coverage, probably best explain the surge in paleo searches on Google. In 2013, paleo searches peaked in April, just after evolutionary biologist Marlene Zuk's book Paleofantasy came out.

Zuk argued that we didn't stop evolving 10,000 years ago or at any other point in time, and so our diet then couldn't possibly be ideal. Rather, she says, evolution can work very quickly, and so we shouldn't consider ourselves biologically identical to cavemen.

"Evolution is deceptively easy to incorporate into your thinking," Zuk told The Salt when we interviewed her back in May. "But there's a pervasive misconception that anything could be perfectly adapted to its environment, and if the environment changes it gets knocked off its pedestal." In other words, the paleo community's notion that we're poorly adapted to modern life has some problems.

Biological anthropologist Christina Warinner poked another set of holes in the paleo diet this year, in a TEDx video that got its own fair share of traffic. She argued that there's strong archaeological evidence suggesting most humans have been eating grains and legumes — and not that much meat — for milennia.

Still, it's easy to see why a lot of people find modern life to be very challenging, especially when it comes to maintaining a desirable weight. And it's understandable that a lot of people need guidance on how to say no to the abundance of fatty, sugary treats around us and find new ways to exercise.

But we have only a smattering of evidence that the neo-paleo diet works as a weight management tool (and a noisy delegation arguing that we should eat less meat to contend with). And we have only vague idea of how many people follow the diet today.

Hamilton Stapell, a historian at SUNY-New Paltz who did an online survey of the paleo community this year, estimates that between 1 million and 3 million Americans are paleo, or about 1 percent of the population. At a meeting of the Ancestral Health Symposium this summer, he argued in a talk called "The End of Paleo" that the diet's popularity will continue to grow modestly, but won't go mainstream.

As far as diets go, mainstream science is increasingly backing the Mediterranean way of eating (which came in at no. 3 in the most googled list of 2013.) As NPR's Allison Aubrey reported in November, a large observational study of older women suggested the Mediterranean diet offers significant benefits for both mind and body.

But paleo probably isn't going away. A survey of more than 500 registered dietitians conducted by the nutrition trade magazine Today's Dietitian and Pollock Communications found that than half of respondents said that paleo and gluten-free diets would be the most popular diet fads of 2014.

So what might paleo in 2014 look like? Word on the street is that ugly vegetables are going to make a comeback, which should appeal to retro dieters of all stripes, yearning for the glory days.