Accessibility links
How Mass-Produced Meat Turned Phosphorus Into Pollution : The Salt Phosphorus is one of the nutrients that plants need to grow, and for most of human history, farmers always needed more of it. But excess phosphorus, either from manure or manufactured fertilizer, can run off into streams and lakes and become an ecological disaster. 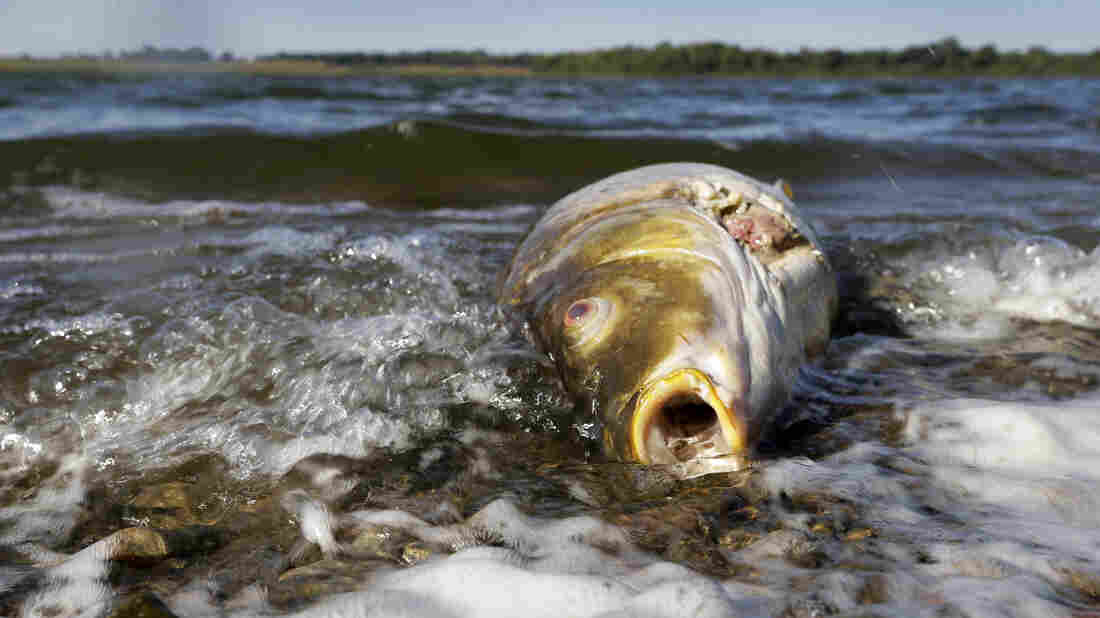 A dead carp floats in water near the shore at Big Creek State Park on Sept. 10 in Polk City, Iowa. Like many agricultural states, Iowa is working with the EPA to enforce clean-water regulations amid degradation from manure spills and farm-field runoff. Charlie Neibergall/AP hide caption 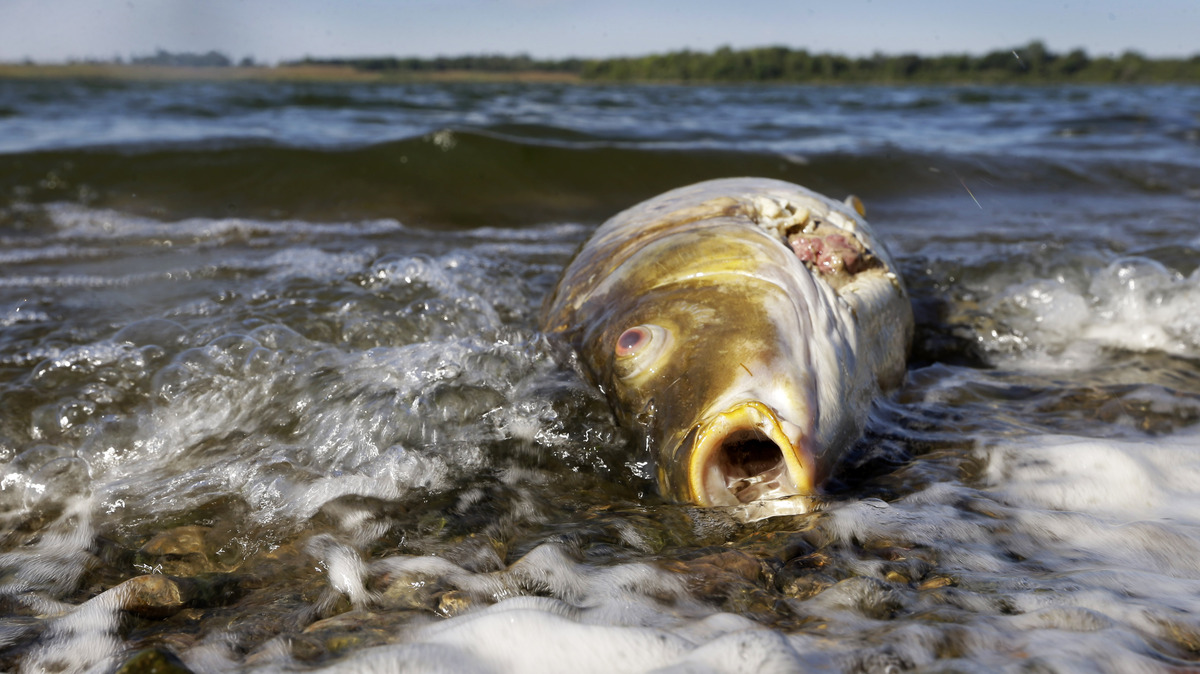 A dead carp floats in water near the shore at Big Creek State Park on Sept. 10 in Polk City, Iowa. Like many agricultural states, Iowa is working with the EPA to enforce clean-water regulations amid degradation from manure spills and farm-field runoff.

It's a quandary of food production: The same drive for efficiency that lowers the cost of eating also can damage our soil and water.

Take the case of one simple, essential chemical element: phosphorus.

Phosphorus is one of the nutrients that plants need to grow, and for most of human history, farmers always needed more of it. "There was this battle to have enough available phosphorus for optimum crop production," says Kenneth Staver, a scientist with the University of Maryland's Wye Research and Education Center, which sits between farm fields and the Chesapeake Bay on Maryland's Eastern Shore.

That's also the tension in this story: agriculture on one side, and water quality on the other.

Traditionally, farmers got phosphorus from animal manure. So if you grew crops like corn or wheat, it was good to have poultry or hogs nearby. Your grain fed the animals, and their manure fed your crops. Everything worked together.

Then came industrial fertilizer: big phosphorus mines; factories for making the other important nutrient, nitrogen; and railroads or highways to carry that fertilizer to any farmer who needed it.

"With the development of the inorganic fertilizer industry, it's possible to grow grain without having animals nearby. So you can decouple the animal agriculture from the grain agriculture," Staver says.

And decouple they did. Farmers concentrated on just one kind of production. So did entire regions. Georgia, Arkansas and Alabama, for instance, now produce the largest number of chickens — more than a billion of them every year. But they don't grow much chicken feed. They haul in grain from far away.

As that grain flows from fields to chicken houses, or hog farms, so do the nutrients in it, such as phosphorus and nitrogen.

Some of it goes into meat that people eat, but a lot goes into animal waste.

This is where the problem starts. Farmers near those chicken houses or hog farms often take lots of that manure and spread it on their fields, partly just to get rid of it and partly for its value as fertilizer. Crops, however, need much more nitrogen than phosphorus. When farmers use manure to give their crops an optimal amount of nitrogen, they oversupply phosphorus.

"This is happening everywhere," Staver says. "Where you have large concentrations of animal production, you tend to have a buildup of nutrients — phosphorus is the one that accumulates — in soils around concentrated animal-producing regions."

Wherever it accumulates, rain washes it into streams, lakes and estuaries, where it's an ecological disaster.

"It drives algae growth, so it ends up clouding the water. You don't get the light penetration to support the rooted aquatic plants that are important in the food chain," Staver says. "You also get these algae blooms, and when they die, they draw oxygen from the water. You get dead zones."

In many places, environmental regulators are trying to stop this buildup of phosphorus.

Until recently, it looked like Maryland was taking the lead. The state has a big poultry industry right beside the Chesapeake Bay, which has been choked with nutrient pollution.

Last year, Maryland proposed new rules that would have stopped farmers from putting more phosphorus on any fields that already have too much of it. It required soil tests to determine a key phosphorus index number.

Lee Richardson, a farmer in Willards, Md., was worried. "The word we were getting — if [your fields] were over 150, you weren't going to spread manure," he says. Most of his fields are over that level.

The manure ban would have hit him two different ways.

First, he grows chickens; if their manure couldn't go on his fields, it would have to go somewhere else. "Chances are, growers were going to have to pay to get it hauled away and taken out of the chicken house," he says.

Second, his corn fields still need nitrogen. Without manure as a nitrogen source, he'd have to buy the manufactured kind of fertilizer, which is more expensive.

Richardson and other farmers protested, arguing that the new rules would inflict huge economic harm, while the environmental benefits are uncertain.

In November, the state of Maryland backed down. It promised to study the issue some more. Kenneth Staver, from the University of Maryland, says it's not that hard to imagine a solution to the problem.

"The obvious one is, find a way to redistribute the phosphorus from the animal production facilities back to where the crop production is," he says. The manure would have to travel to the vast fields that farmers currently fertilize with fresh, mined phosphorus.

Hauling manure such distances would cost money. Staver says it's the price of cleaner, healthier water.

If farmers have to pay that cost, growing chickens or hogs will get more expensive.

Then we, the consumers, would pay for it, through more expensive meat.