Accessibility links
Smithfield Prods Its Pork Suppliers To Dump Pig Crates : The Salt The world's largest hog and pork buyer wants its contract farmers to move pregnant sows out of constrictive crates and into group houses, generally considered more humane, by 2022. The move is significant because independent farmers supply about 40 percent of the company's sows. 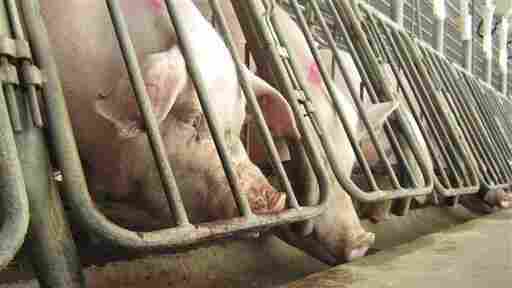 Smithfield, the world's largest hog and pork buyer, announced Tuesday that it's asking the independent farmers with whom it has contracts to get rid of stalls for pregnant sows to improve the animals' living conditions.

To nudge these farmers to make the changes to their facilities by 2022, Smithfield is offering to extend their contracts once they've converted their gestational stalls into group houses, which are generally considered more humane.

The move is significant because 40 percent of Smithfield sows are raised on farms owned by independent farmers. The company has contracts with 2,100 farms across 12 states.

Smithfield Foods To Be Sold To Chinese Firm For $4.72 Billion

Smithfield, best known for its ham products, says it has already moved 54 percent of pregnant sows on its company-owned farms in the U.S. out of the the narrow stalls, known as gestation crates, and into group housing, per a commitment it made in 2007 to phase out the crates.

The hog industry's standard practice for years has been to confine pregnant sows in the 2-foot-wide steel crates for the length of their four-month pregnancies. The idea behind the crates is to keep the sows from squashing their babies, fighting and stealing each others' food.

But animal welfare groups have long called the crates cruel and unnecessary, and pressured big producers like Smithfield to end the practice. Advocates argue that the crates restrict the animals' movement too much — the sows can't turn around at all — and are simply devices to pack as many animals into a house as possible. (Smithfield alone used 15.8 million hogs in 2012.) Group houses, by contrast, are bigger, and allow pregnant sows to come and go from their stalls.

Smithfield's announcement comes as 60 of the world's largest food retailers – from McDonald's to Safeway, Costco and Oscar Mayer – have said they won't tolerate gestation crates in their supply chains anymore, either.

In a press release, Smithfield said that the change it is requesting is not required, but contract extensions "will be less likely" for farmers who keep gestation crates.

"We recognize that these projects require a significant investment on the part of our growers," C. Larry Pope, president and chief executive officer of Smithfield Foods, said in a statement. "But a well-planned renovation to a group housing system will help maintain the farms' value for years to come, while at the same time supporting our companywide commitment to animal care."

The Humane Society of the U.S. says that Smithfield's announcement spells the eventual end of the gestation crate.

"Smithfield's announcement means certain death for the gestation crate in pork production," Matthew Prescott, food policy director for HSUS, tells The Salt. "For the millions of pigs currently locked inside these cruel boxes, that demise will be most welcomed."