Accessibility links
Whales, Dolphins Are Collateral Damage In Our Taste For Seafood : The Salt More than 80 percent of the seafood consumed in the U.S. now comes from abroad. And fishermen in other parts of the world continue to kill not just dolphins but seals and even whales. So conservation groups are calling for tougher import rules to protect sea animals at risk from fishing. 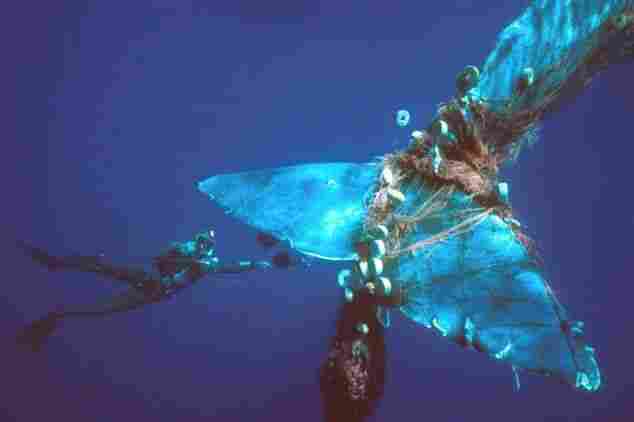 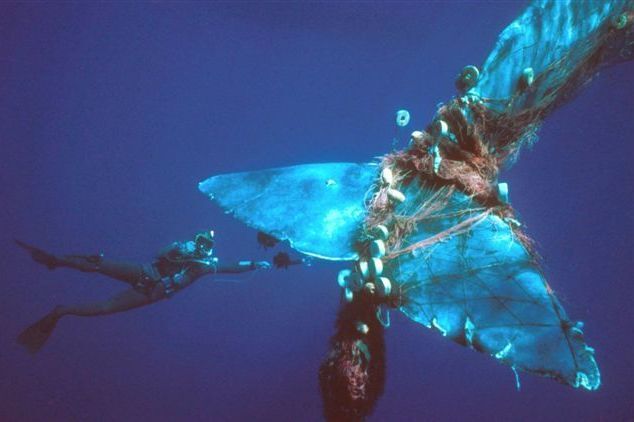 A sperm whale entangled in a drift net. A report says commercial fisheries around the world kill or injure 650,000 mammals a year.

Hundreds of thousands of marine mammals are injured or killed every year by fishermen around the world. And because most seafood in the U.S. is imported, that means our fish isn't as dolphin-friendly as you might expect.

There was a time, more than 40 years ago, when U.S. fishermen killed millions of dolphins while fishing for tuna. After a public backlash, fishermen figured out how to minimize that so-called bycatch.

But fishermen in other parts of the world continue to kill not just dolphins but seals and even whales. So conservation groups like the Center for Biological Diversity have been pressing for stricter standards on imports.

"We thought this would be a good time to look at what benefit we would get from enforcement of this, what species are particularly at harm, what regions of the world are particularly at risk from marine mammal bycatch," says Zak Smith, an attorney at the Natural Resources Defense Council.

So his group has just released its analysis of the threats that marine mammals face from global fisheries.

It finds many species of dolphin, seal and sea lion are at risk — even endangered species like the North Atlantic right whale.

And the global tally of marine mammal injuries and deaths due to fishing practices is high: Biologists have estimated that 650,000 are killed or injured each year. Of that, 300,000 are dolphins and related cetaceans, and 350,000 more are seals and sea lions.

Casualties happen in all sorts of fisheries, ranging from tuna to squid, shrimp, swordfish and bottom-dwelling fish. At the bottom of the ocean, sea mammals can get trapped in trawls. And it's hard to connect the dots between fish that have been caught using these techniques and those that end up getting imported to the U.S. 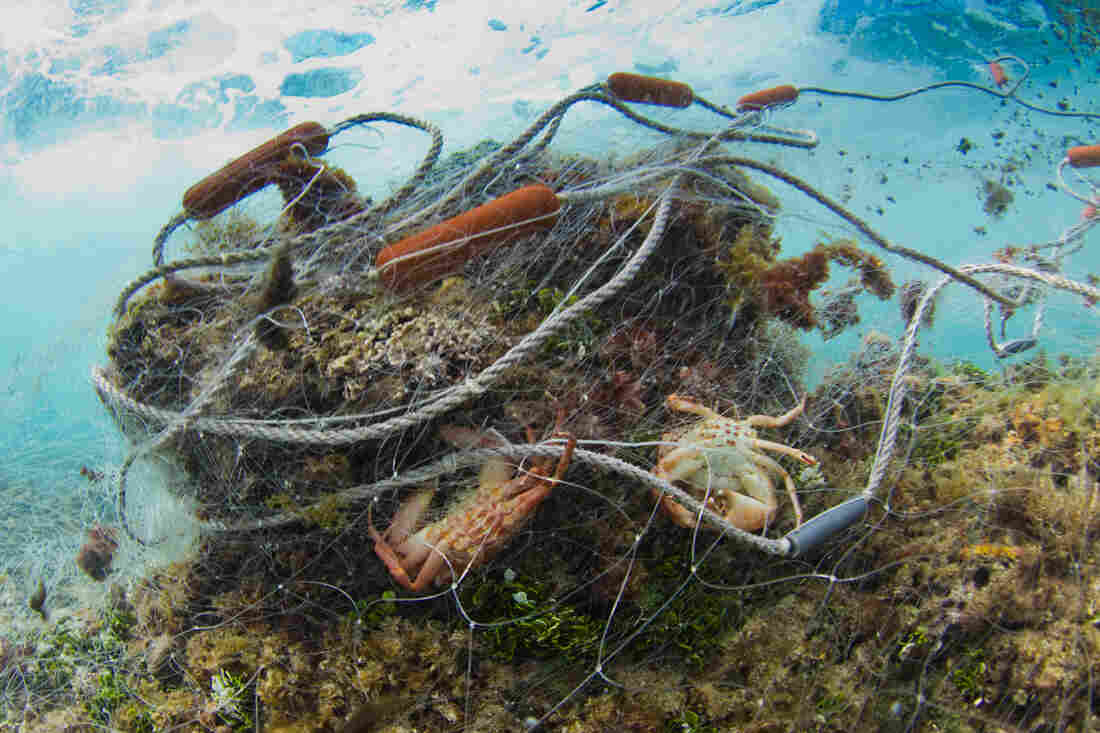 A gill net about 300 feet long was found abandoned on a reef near Oahu, Hawaii. Many marine mammals end up caught in fishing gear like these large mesh nets that fishermen set on the seafloor or leave to float in the ocean. Frank Baersch/Marine Photobank hide caption 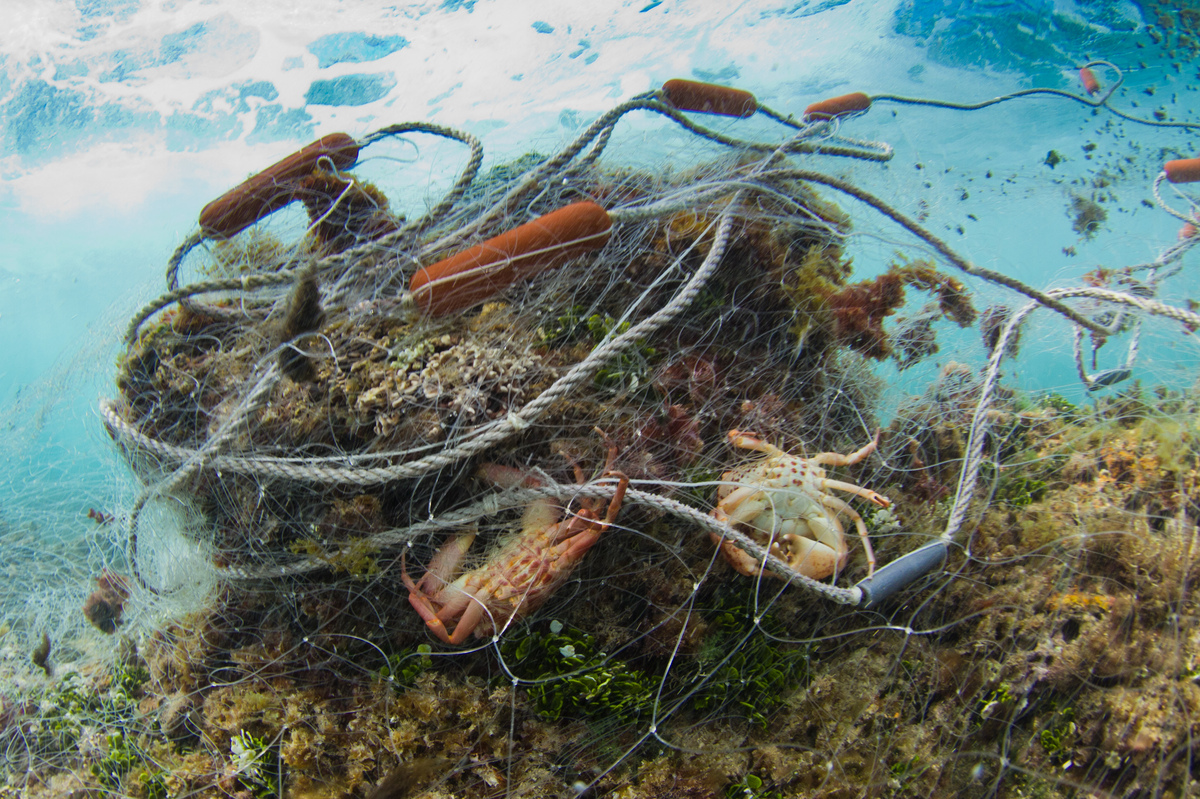 A gill net about 300 feet long was found abandoned on a reef near Oahu, Hawaii. Many marine mammals end up caught in fishing gear like these large mesh nets that fishermen set on the seafloor or leave to float in the ocean.

Smith says under federal law — the Marine Mammal Protection Act — fish imported into the U.S. must meet the same high standards for protecting these animals as is required of local fishermen. It's a black and white requirement, and he says it's not simply enough for a country to have laws on the books.

"You have to prove it, and the only way you can prove it, like we prove it in the United States, is you have an observer program that goes out on the fishing vessels and does a sample and looks at how many marine mammals are being captured," Smith says.

That is not common practice elsewhere in the world. And it's not cheap. But there's a lot at stake.

The Big Gulp: Dolphins Don't Have Time To Savor Their Food

"I think for certain species in certain regions, it's a threat that can lead to extinction," says Rebecca Lent, executive director of the federal Marine Mammal Commission.

Over the years, the U.S. has made progress in reducing this worldwide toll. It has cracked down on imports of tuna that were caught with methods that kill dolphins, and it has pressed nations to stop indiscriminate practice of drift-net fishing.

But at the same time, U.S. seafood imports have quadrupled. More than 80 percent of our seafood now comes from abroad. "What about these other products that we're importing?" Lent wonders. That's where new rules are needed.

Lent says it will take time for the federal fisheries agency to develop those new rules, and she expects them to be phased in gradually so fishermen around the world have time to adjust.

Nina Young, who is working on those new regulations at NOAA Fisheries, says the issue is one of fairness to American fishermen who are already following the rules.

"Clearly our objective here is to level the playing field here for our domestic fishermen," Young says.

And while rules for imports can certainly have an impact, Young says they won't stop the killing of marine mammals.

"There are a lot of animals that are killed in artisanal fisheries, where the product is never imported into the United States," she says.

In particular, many marine mammals are killed by subsistence fishermen in Asia who string gill nets along the shore to catch fish — and whatever else happens into those nets. "Our ability through this regulation to address that particular issue is severely limited," says Young.

But tougher import rules will help — and help Americans shop for seafood with less worry about whether a seal or dolphin or a whale was collateral damage. Here are our tips for buying sea life-friendly seafood.