Accessibility links
Is Sugar Addiction Why So Many January Diets Fail? : The Salt Over the last few years, scientists who study the way food influences our brains and bodies have been moving toward a consensus that sugar is addictive. We've rounded up their tips on how to conquer cravings for one of nature's most pleasurable substances. 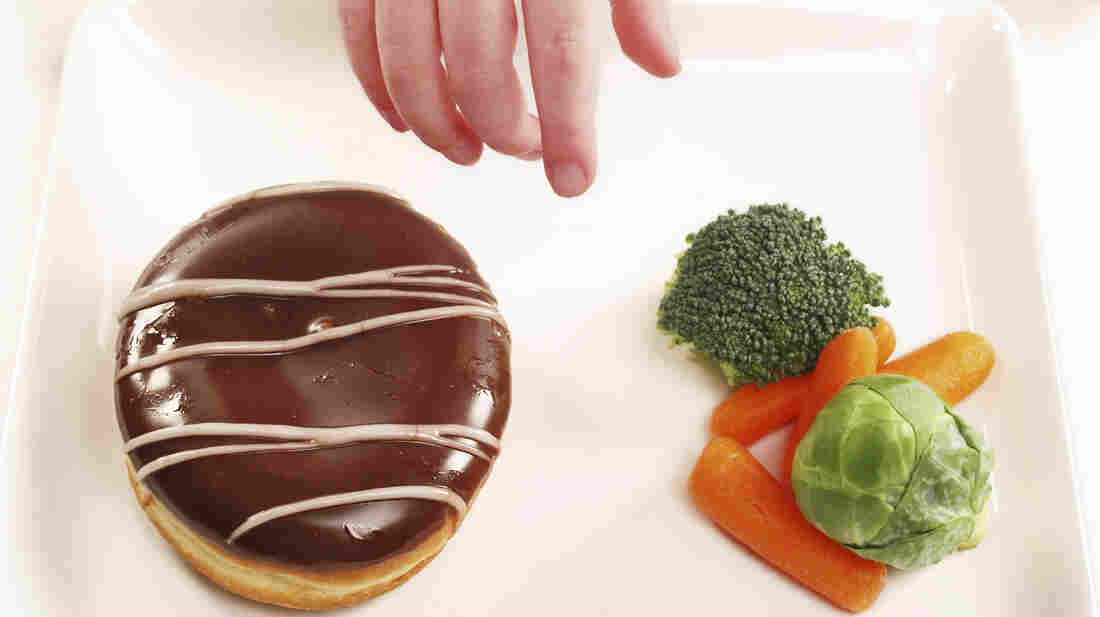 Indulge or resist? Sugar cravings can be a serious challenge. iStock hide caption

We've survived the stretch between Thanksgiving and New Year's Day, when rich, sweet treats come at us non-stop. Now is the season of reform, when gym memberships, cleanse books and weight-loss plans sell like gangbusters.

The cycle has become so predictable, and disheartening, as our collective motivation to change our ways dissolves by February like a sugar cube in a glass of champagne. I've certainly done my fair share of January food-restriction experiments that fizzled at the first sign of a Valentine's Day candy heart.

For me, it's refined sugar, pure and simple, that, over time, I've identified as the food I would most love to be able to resist.

This year, I vowed to seek out new ways to stay out of the drawer my colleague keeps stocked with chocolate bars of all brands and sizes -- an alluring stash stored right next to my desk.

I'm not alone in singling out sugar and the undue power it wields over me, according to researchers.

Can You Be Addicted To Carbs? Scientists Are Checking That Out

Over the last few years, scientists who study the way food influences our brains and bodies have been moving toward a consensus that sugar is addictive. Not everyone agrees or is willing to come out and say it yet. But as anti-sugar crusader Robert Lustig of the University of California-San Francisco noted in a recent piece for TheAtlantic.com, the research is suggesting that we want sugar even more than we want fat.

Nicole Avena, a neuroscientist at Columbia University, has shown in lab experiments with rats how overeating of palatable foods (like sugar) can produce changes in the brain and behavior that resemble addiction.

About 11 percent of the population meets the criteria for food addiction, Avena says — and most say they're hooked on carbohydrates. To make the case to the general public, Avena has just published a book, Why Diets Fail, which she wrote with John Talbott, an author who recently went from borderline obese to fit by cutting sugar and most starches from his diet.

They offer a simple explanation for why many of us fail in our efforts to reform: We're addicted to refined sugars and carbs, and we don't have a good enough plan to fight them. They then lay out an eight-step plan for freeing ourselves from the vise and surviving the perilous withdrawal period.

Ashley Gearhardt, a psychologist at the University of Michigan who runs the Food and Addiction Science and Treatment lab, is a bit more cautious about comparing sugar to drugs like nicotine and alcohol. She says the addiction jury is still out on sugar. We still need to better understand whether people addicted to sugar experience tolerance and withdrawal in the same way they would with drugs, she says.

But, she says, the conventional advice of moderation will definitely not work for everyone.

"The majority of people will be able to moderate sugar," says Gearhardt. "But many people repeatedly fail when they try moderation."

Those people, according to Avena and Talbott, are good candidates for their plan, which boasts the prospect of a permanent break-up with sugar.

Eliminating sugar from the diet forever may sound draconian to some, given just how prevalent desserts and sweet treats are in our environment and our culture. But Gearhardt agrees with Avena that for some, it's better to make a consistent lifestyle change than to flip-flop.

"What we see from the animal models is that the most potent way to train the brain for addiction is when things become intermittent," says Gearhardt. For those with strong sugar cravings, she says, the allure can be like gambling — the fact that you don't do it every day makes you more likely to double-down when you do get the opportunity. "You're flipping between extremes."

Some self-identified sugar addicts have managed to eliminate it from their diets, and those who are successful swear by it.

"I have not had refined sugar or flour in about 15 years, and I do not feel deprived," Michael Prager, a journalist who writes and speaks on food addiction, tells me. "I just found that life was better without it."

Health authorities agree that Americans' current habit of consuming an average of 22 teaspoons, or 110 grams, of sugar per day is too much. The American Heart Association suggests that women consume no more than 6 teaspoons (30 grams) a day, and men limit themselves to 9 teaspoons (45 grams) a day.

I doubt I'm consuming 22 teaspoons a day — I'm not a soda drinker, nor do I binge on cookies or ice cream. But regardless of whether the quantity you consume is excessive by these standards, if you're like me, the frequency and strength of the sugar cravings alone may be enough to drive you to seek help.When I eat sugar, I can feel something devilish turn on in my brain: a voice saying, "More, more, more."

So I asked Gearhardt and Prager for their tips on how to conquer sugar cravings. I also referred to Avena and Talbott's book, Why Diets Fail. Many of their tips overlapped, so I've compiled them here.

Still, these strategies may not work for everyone. If you feel like you're white-knuckling it and it's just too hard, Geardhardt recommends seeking professional help from food addiction specialists.