Accessibility links
California's Pot Farms Could Leave Salmon Runs Truly Smoked : The Salt Marijuana cultivation is booming along the state's North Coast. But these plantations, critics say, guzzle enormous amounts of water while also spilling pesticides and fertilizers into waterways that are important sources of the West Coast's salmon species. 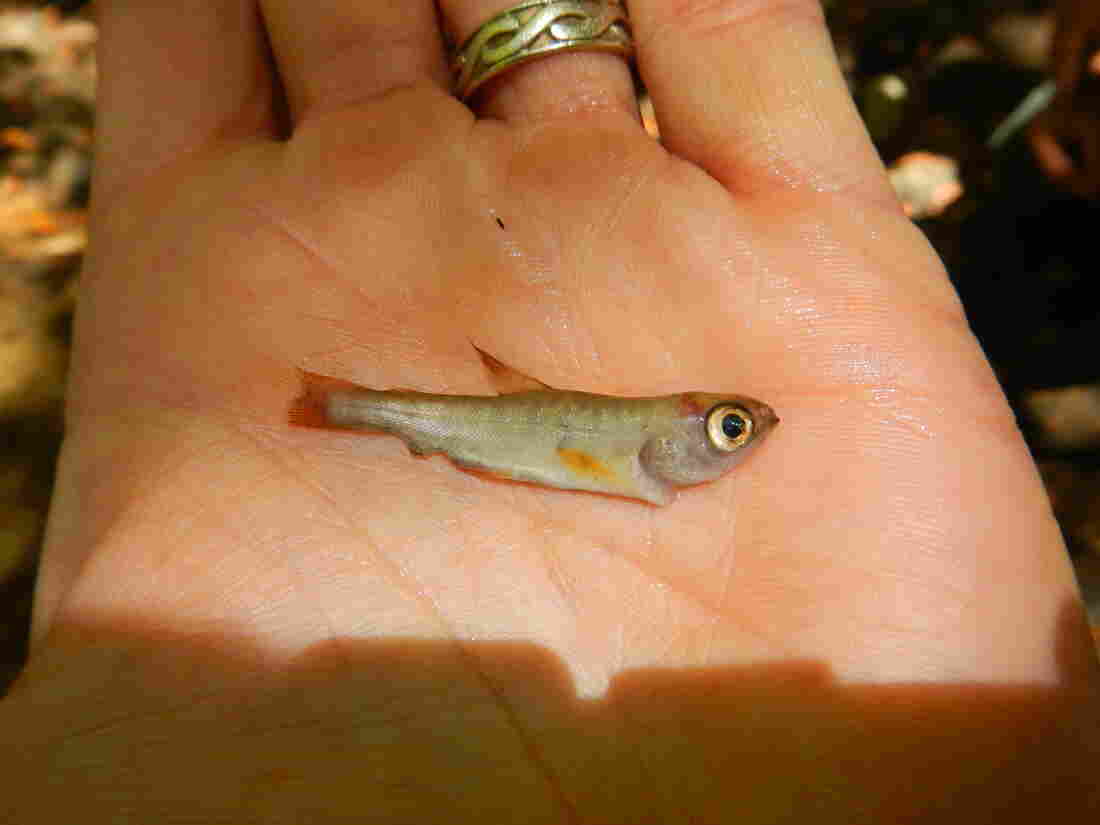 This dead juvenile coho salmon was found in a tributary of California's South Fork Eel River. About 20 large-scale marijuana farms are located upstream from the watershed pictured. All of them divert water from the stream. Courtesy Scott Bauer hide caption 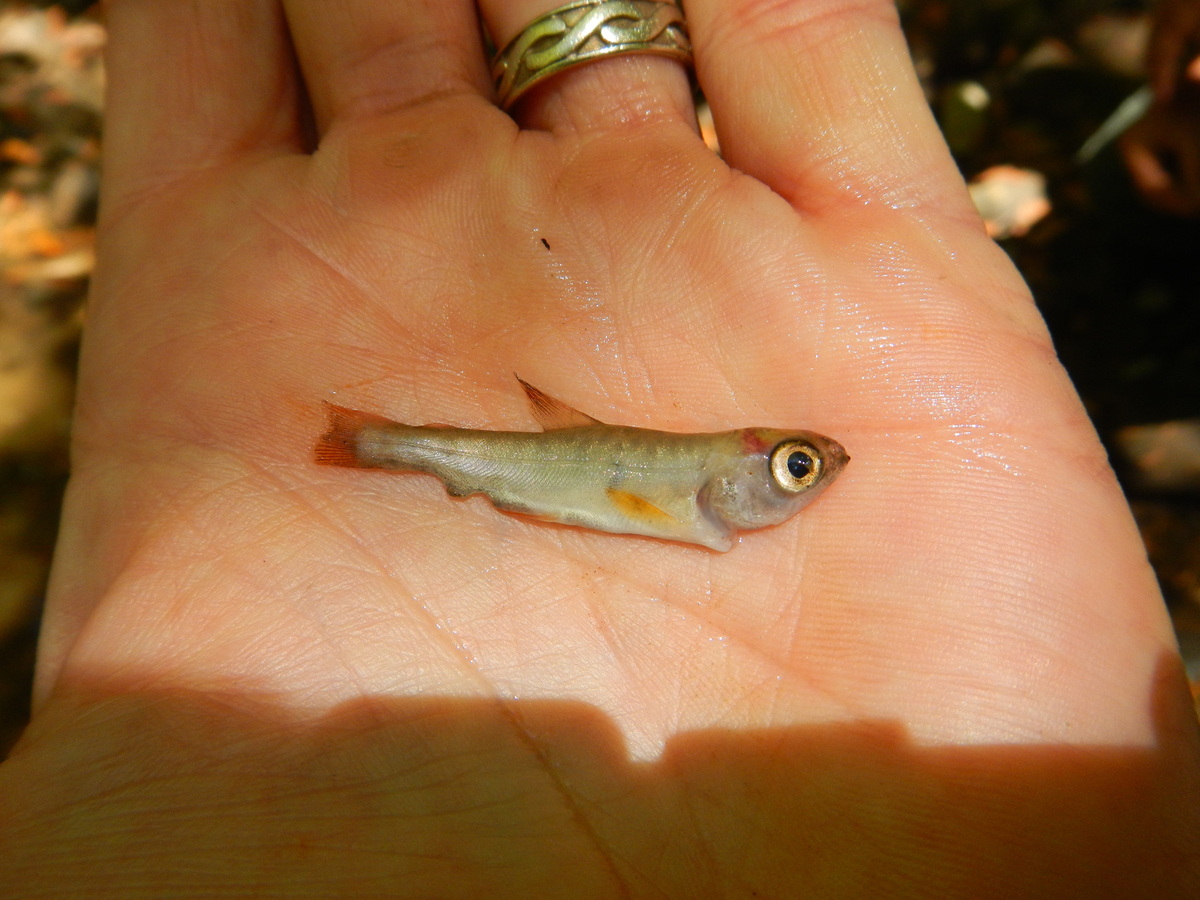 This dead juvenile coho salmon was found in a tributary of California's South Fork Eel River. About 20 large-scale marijuana farms are located upstream from the watershed pictured. All of them divert water from the stream.

For many users and advocates of marijuana, the boom in the West Coast growing industry may be all good and groovy. But in California, critics say the recent explosion of the marijuana industry along the state's North Coast — a region called the "emerald triangle" — could put a permanent buzz kill on struggling salmon populations.

The problem? According to critics, marijuana plantations guzzle enormous amounts of water while also spilling pesticides, fertilizers and stream-clogging sediments into waterways, including the Eel and the Klamath rivers, that have historically produced large numbers of Chinook salmon and related species.

"The whole North Coast is being affected by these pot growers," says Dave Bitts, a Humboldt County commercial fisherman and the president of the Pacific Coast Federation of Fishermen's Associations.

"I have nothing against people growing dope," he says, "but if you do, we want you to grow your crop in a way that doesn't screw up fish habitat. There is no salmon-bearing watershed at this point that we can afford to sacrifice."

Growers of marijuana often withdraw water directly from small streams and use up to 6 gallons per day per plant during the summer growing season, says Scott Bauer, a fisheries biologist with the California Department of Fish and Wildlife.

But marijuana growers are undeservedly taking the blame for a problem that is caused by all residents of the North Coast, argues Kristin Nevedal, a founding chairperson with the Emerald Growers Association.

"It's just so easy to point a finger at cannabis growers because it's a federally prohibited substance," she tells The Salt. "The truth is, if you flush a toilet in the hills, you're a part of the problem."

According to Bauer, 24 tributaries of the Eel River — in which once-enormous spawning runs of Chinook salmon have nearly vanished — went completely dry in the summer of 2013. Each, Bauer says, was being used to irrigate pot farms.

As a result, Bauer expects to see poor returns of Chinook and Coho salmon, as well as steelhead, in several years. While 2013 saw record-low precipitation in California, drought, Bauer says, is only part of the problem, and he still blames marijuana farmers.

Taking water from a stream isn't necessarily illegal, though it does usually require applying with the state for permission. Many farmers go this route, Bauer says. But of the estimated 4,000 pot growers in Humboldt County alone, "maybe a couple have applied for" water use permits, Bauer says.

Marijuana plantations along the North Coast are proliferating. Bauer, who has closely studied Google Earth images of the area, estimates that acreage under pot cultivation doubled from 2009 to 2012.

Left: A North Coast marijuana grow site in 2010, with nothing but a little white roofed structure. Right: The same site in 2012. Google Earth hide caption

Left: A North Coast marijuana grow site in 2010, with nothing but a little white roofed structure. Right: The same site in 2012.

Stormer Feiler, a scientist with California's North Coast Regional Water Quality Control Board, confirms the same: "It's like the gold rush," he says.

California's Chinook salmon fishery was canceled or shortened three years in a row beginning in 2008. This occurred following record-low spawning returns in the Sacramento River, one of the largest salmon-producing watersheds on the West Coast. The crash was blamed partly on agricultural overuse of the river's water.

Since then, the Golden Gate Salmon Association, a group based in San Francisco, has been advocating for more fish-friendly use of the river's water —especially limits on how much water can be pumped into farmland.

"It's not just the water they're taking out of the streams but the chemicals and nutrients they're putting into the water," McManus says.

Fertilizers that drain into rivers can cause floating carpets of algae to grow in the water. When these mats begin to decay, the breakdown process steals oxygen from the water, suffocating fish. Bauer has discovered pools full of dead adult Chinook salmon — fish full of eggs, he says, that had not yet spawned.

As many as a half-million Chinook salmon once spawned in the Eel River each year. By the 1950s, the fish were almost gone. Since then, the population has slightly rebounded, and several thousand Chinook now return to the Eel annually.

Scott Greacen, the executive director of Friends of the Eel River, warns that, unless pot growers are more closely regulated, some of California's North Coast salmon runs could be looking at extinction.