Accessibility links
Blending Red Wine With Porter Ale: A Crossover Beer Worth The Buzz? : The Salt Two of mankind's oldest beverages are being mashed together in a new generation of brews. These beer-wine blends, boasting layered, complex flavors, are part of a broader trend of experimentation, as craft brewers seek to distinguish themselves in a crowded field. 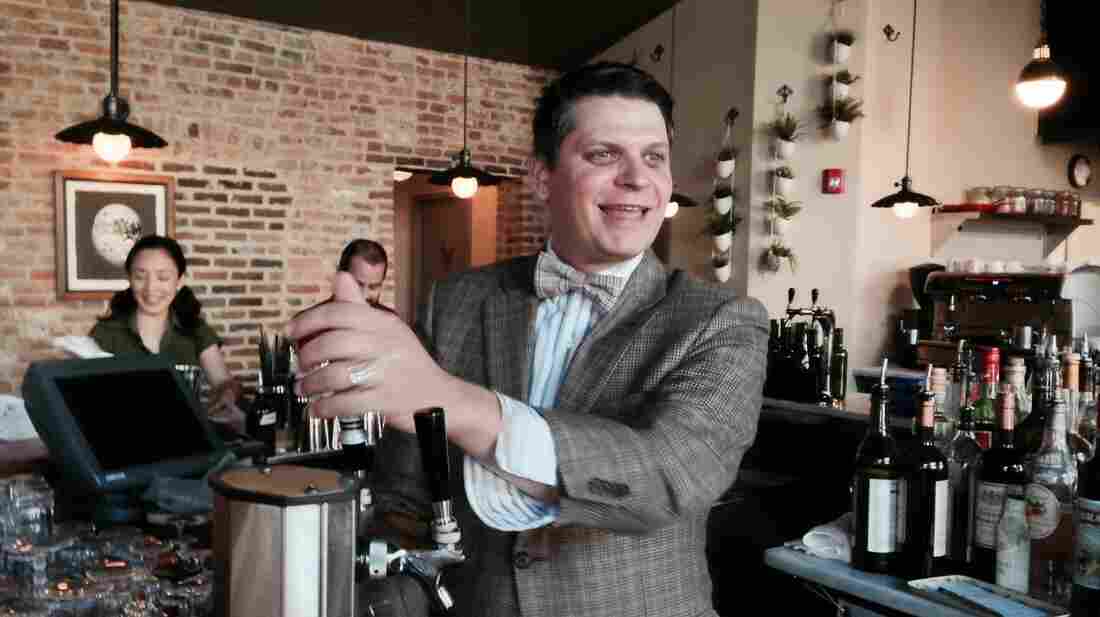 Sebastian Zutant is the owner of The Red Hen restaurant in Washington, D.C. He's also a sommelier. He and a friend at DC Brau have developed their own beer-wine mashup. Allison Aubrey/NPR hide caption

If you're a beer lover and your significant other tends more toward wine, is there a drink that can satisfy both of you?

How about a beer-wine mashup, combining two of mankind's oldest beverages?

"To me, it's kind of the magic in the middle," says Sebastian Zutant, sommelier and owner of the D.C. restaurant The Red Hen.

Zutant has partnered with his friend Jeff Hancock of craft brewery DC Brau to blend a chocolatey porter ale with a touch of Bordeaux.

"It really has distinct red wine characteristics, as well as beer" ones, says Zutant as he sips the frothy, dark-brown mashup out of a wine glass. It has rustic notes that Zutant describes as "pruney" (as in prune), almost like dried cranberry.

"It's fun stuff, it's weird stuff, and I think it works," Zutant says.

The idea came to Zutant when he learned that winemakers usually toss out the tannin-rich sediment known as lees. A waste product of winemaking, lees are basically the stuff that falls to the bottom during the fermenting process: bits of grape skin, seed fragments and dead yeast cells.

It's of no use to the winemakers. But as the saying goes, one man's trash is another man's treasure.

Zutant got the lees from friends at two Virginia vineyards, Linden and RdV, then set about figuring out how best to blend the stuff with beer.

During my visit to DC Brau, where Zutant and Hancock make their wine-beer fusion, Hancock showed me how they pour the lees, which is viscous, almost like cough syrup, through a funnel into the top of an old wine barrel. The beer and the wine lees then age together inside the barrel.

The result? The tannins, which give red wine its complex flavor, are pulled into the beer.

And how do customers respond? When John Vorhees and Alicia Boyce sat down to dinner at The Red Hen a few weeks back, they were intrigued.

"You like wine and I like beer," said John Vorhees, talking to his wife. "So this could be it!" — something to satisfy both of them. And after tasting it, Vorhees proclaimed, "I'm sold."

Alicia was still warming up to the drink after her first sip. "It's good," she said hesitantly. "It's different!"

Zutant says the reaction has been overwhelmingly positive: "It was definitely a crapshoot. We rolled the dice, and it seemed to work out nicely."

It's the novelty that people are drawn to. And that's exactly what Zutant and DC Brau's Jeff Hancock are going for.

"The further the competition grows, the further you have to distinguish yourself," Hancock says.

He says if you want to stand out as a craft brewer, you have to be willing to take some chances — and push the frontiers of brewing. Especially now, with more than 2,400 breweries across the country.

Hancock isn't the only brewer experimenting with wine-beer crossovers. Dogfish Head Craft Brewery makes a beer made with grape must, called Sixty-One, as well as Kvasir, a sort of Nordic grog that blends beer, fruit wine and mead in a re-creation of ancient recipes. And there's Oculus Dexter #1 by Crooked Stave Artisan Beer Project in Denver.

The wine-beer crossover is part of a broader trend in barrel-aging beer. And there are lots of examples of this trend, from Fernet Aged Porter from Odell Brewing Co. in Fort Collins, Colo., to Bourbon Barrel Aged Imperial Stout from Full Sail Brewing Co. in Hood River, Ore.

It's truly a time of experimentation, and of expanding beer-drinkers palates.

"I think the brewers are fearless," John Holl, author of The American Craft Beer Cookbook, told us. "They're not afraid to try new things and keep pushing boundaries."