Accessibility links
Food Firms Trim Trillions Of Calories From Packaged Treats : The Salt In the past few years, major food manufacturers have introduced more healthful versions of their products, such as low-fat ice cream and "light" soups. These efforts have slashed 6.4 trillion calories from packaged foods sold in 2012, a study finds. But does that calorie drop help shrink Americans' growing waistlines? 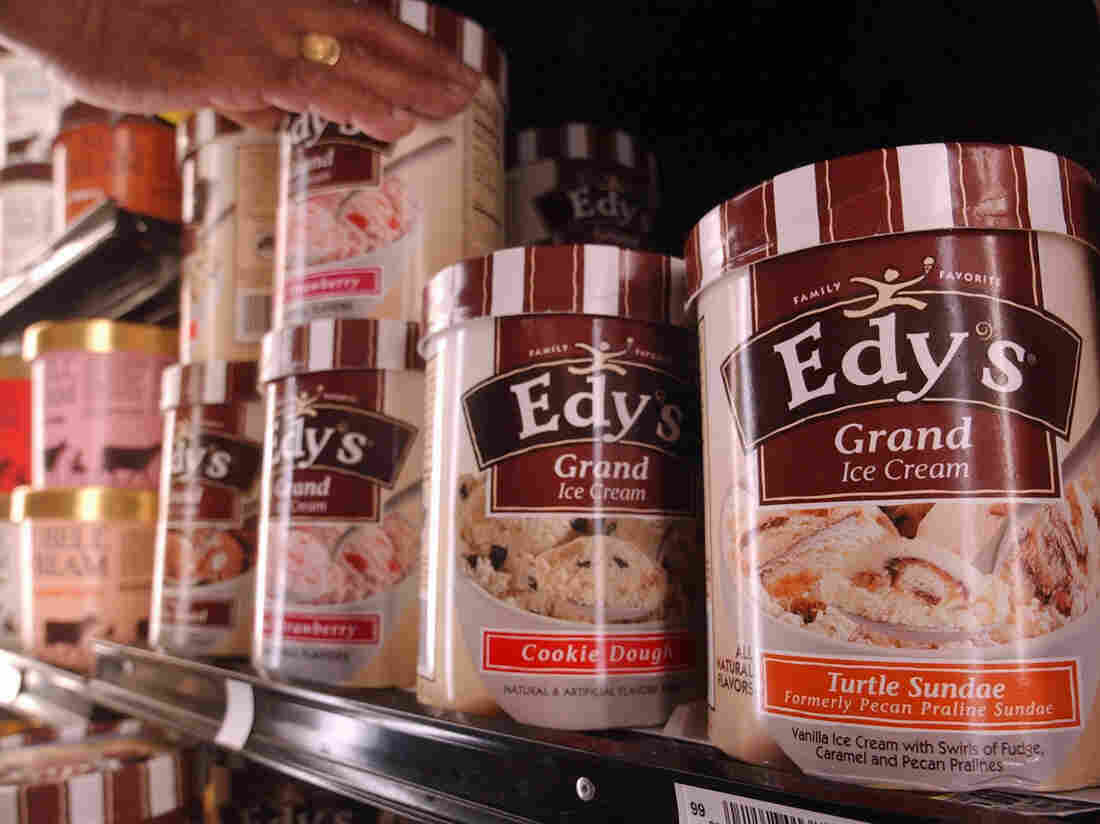 To make a more healthful version of Edy's Grand Ice Cream, Nestle developed a technology that could cut half the fat and two-thirds of the calories from the frozen treat. Erik S. Lesser/Getty Images hide caption 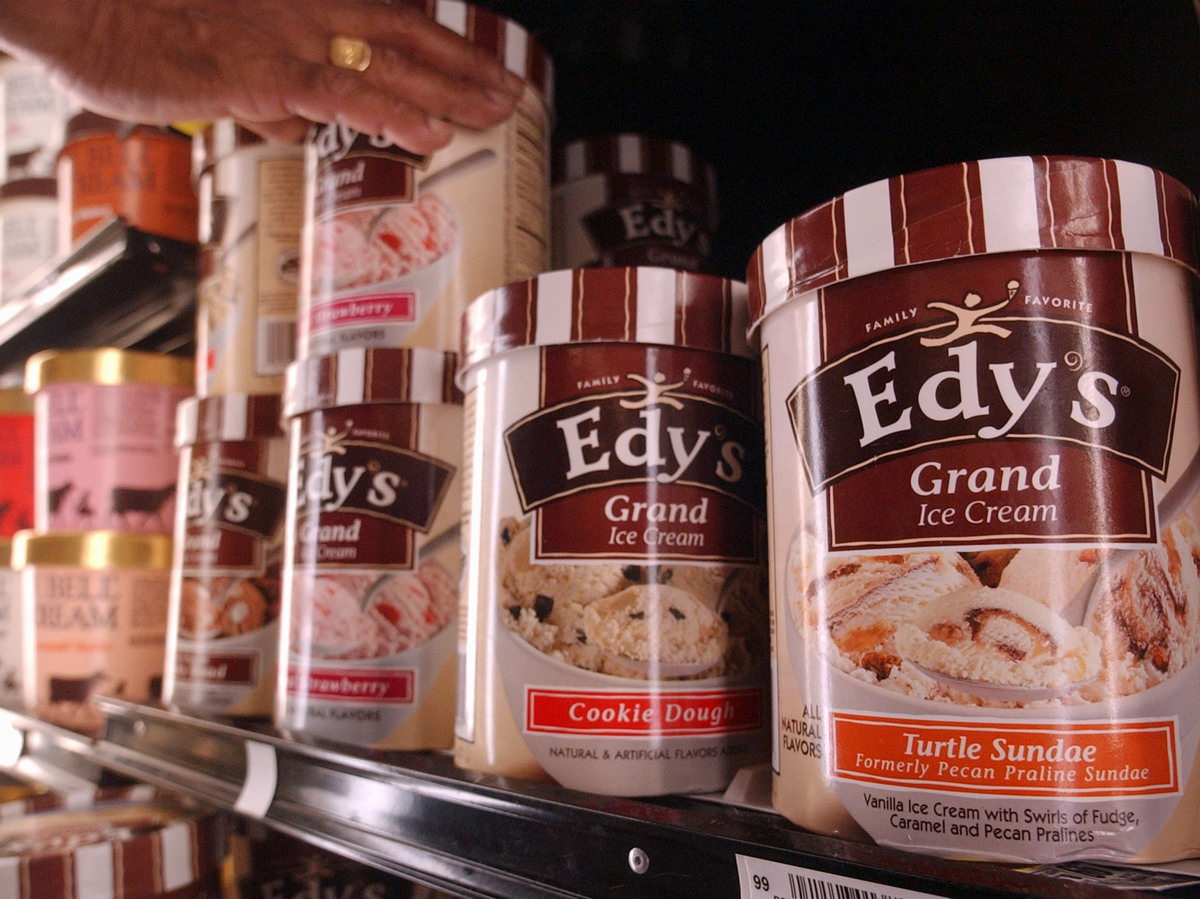 To make a more healthful version of Edy's Grand Ice Cream, Nestle developed a technology that could cut half the fat and two-thirds of the calories from the frozen treat.

It sounds impressive: Major food companies have slashed 6.4 trillion calories from packaged foods they sold in 2012 compared with 2007, a study reported Thursday.

But for each American, that number translates to about 78 fewer calories purchased each day, or the equivalent of cutting out one apple or 3 1/2 Hershey's Kisses.

The cut in calories is part of an effort by the nation's giant food producers, such as General Mills, Hershey Co. and Kraft Foods, to curb childhood obesity by getting more healthful items on grocery shelves.

But could cutting out 78 calories each day really make a difference in your waistline or in the obesity problem in the U.S.?

Candy Sales Are Flat; The Industry Blames The Weather

"The range of calories that we need to stop obesity is about 130 to 170, approximately, per person per day," says Kathryn Thomas of the Robert Wood Johnson Foundation, a nonprofit that funded the study. "If these companies are helping to take out 78 calories per day, that's an important contribution toward reaching the goal."

But the findings aren't that clear-cut. The study looked only at sales of packaged foods and beverages. It's still unknown how this translates to calories consumed by Americans, especially given that about 40 percent of all food in the U.S. is wasted.

Also, the study didn't consider food eaten in restaurants, where Americans get about a third of their calories.

Back in 2010, 16 of the nation's major food companies pledged to remove 1 trillion calories from their products in grocery stores by 2012, and 1.5 trillion calories by 2015. To reach that goal, the corporations — which produce a third of all packaged foods sold in the U.S. — started selling smaller portion sizes and introducing low-calorie versions of their snacks and beverages.

For instance, Nestle developed an ice cream with half the fat and one-third of the calories of the original, The New York Times reported. General Mills introduced a 100-calorie Greek yogurt, while Campbell's launched a "light" line of calorie-reduced soups. Jimmy Dean put out a more healthful version of its sausages, made with turkey.

So did any of these efforts change what Americans bought last year?

To figure that out, researchers at the University of North Carolina in Chapel Hill tracked the items scanned through checkout lines around the country. The team's full report isn't published yet. But the Robert Wood Johnson Foundation released the overall numbers on its website Thursday.

In 2012, the participating companies sold about 54 trillion calories, compared with 60.4 trillion in 2007, the study found. So the companies crushed their goal — with a 10 percent drop in calories.

But some health researchers think the companies shouldn't get all the credit for the progress.

"It's great to see companies selling fewer calories and reformulating their products to reduce fat and sugar, but it's hard to know how much is due to the proactive efforts of the industry rather than changes in Americans' eating habits, " Margo Wootan at the Center for Science in the Public Interest told The New York Times.

Thomas at the Robert Wood Johnson Foundation agrees that Americans' preferences are helping to drive the low-calorie food trend in grocery stores.

"There's a little bit of a virtuous cycle going on here," she tells The Salt. "Demand for these healthier products is going up. And the industry probably wouldn't have stepped forward to make this pledge if there wasn't a market demand for this change."

Companies that are doing more to make these products, she adds, "are doing better financially."